Freeze ahead—time to dig out the frost blankets

The inevitable is about to happen. Temperatures will drop down to freezing or even below tonight and again on Sunday and Monday. Although the weather folks can’t seem to agree on how cold it will actually get. This is what Accuweather says: 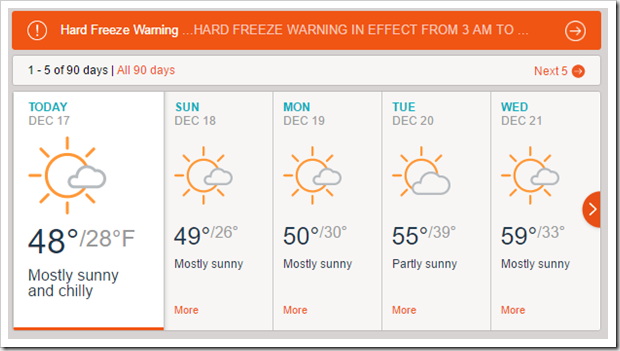 The Weather Channel and Weather Underground are a tad less Debbie Downer:

Obviously it all depends on which weather station the forecast is based on. I suspect Accuweather might use Sacramento International Airport, which is out in the open and often much colder than here. I generally prefer Wunderground because you can select from many different local weather stations. While there’s no forecast for them, the historical data they report is very useful.

In hindsight, we’ll know which of these weather services was right, but I didn’t want to take any chances. In the last couple of year I took a fairly lax stance to frost protection (virtually none). That was a swing in the other direction from being overly cautious (January 2013, November 2013). This year I want to find a good compromise—although I’m still hoping for a generally mild winter where freezing temperatures are a rarity.

This morning I walked around the back and front yard to determine what should be protected. Then I grouped the potted plants into clusters to minimize the number of frost blankets needed. Fortunately, only a few in-ground plants need protection. Here are the plants I identified: 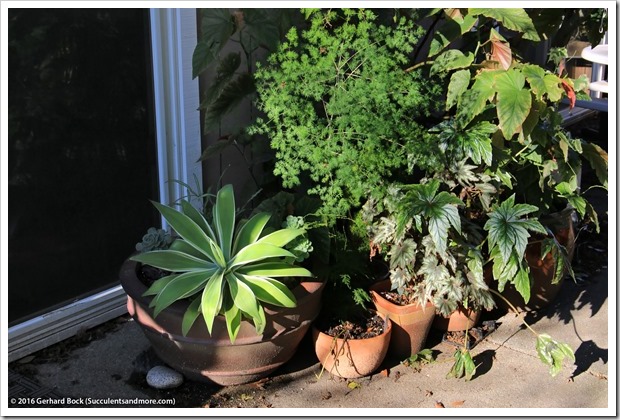 Agave attenuata ‘Ray of Light’ near the slider to the family room. I didn’t protect it last year and it got badly damaged. This year I want to avoid that. I also want to protect the Begonia ‘Little Brother Montgomery’ to the right. 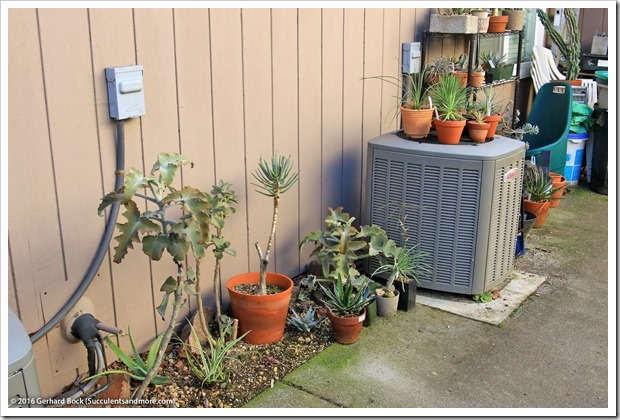 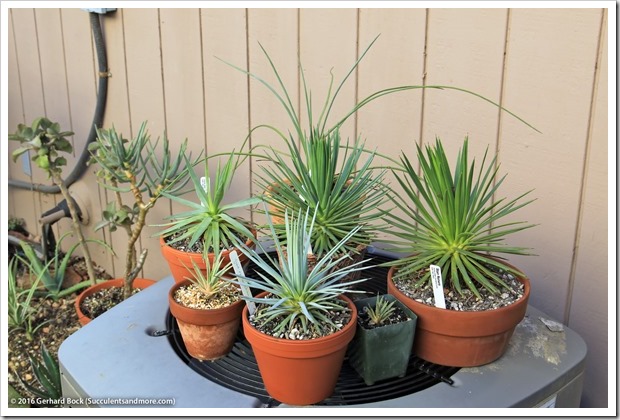 My mini collection of agaves in the Striatae group (clockwise beginning in the 7 o’clock and ending in the 6 o’clock position): Agave striata ‘Nana’, Agave kavandivi, Agave tenuifolia, Agave petrophila, undescribed agave from Santiago Lachiguiri, Agave rzedowskiana. Many of these are quite tender. 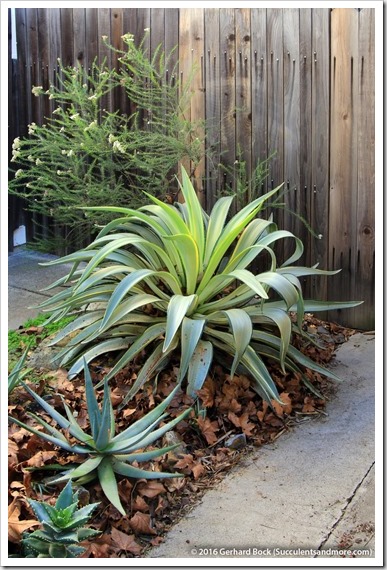 Agave desmettiana ‘Joe Hoak’. It’s wimpy and gets unsightly brown spots even at the hint of frost. 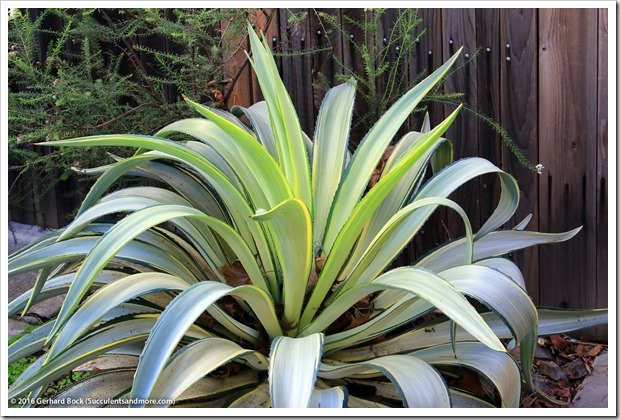 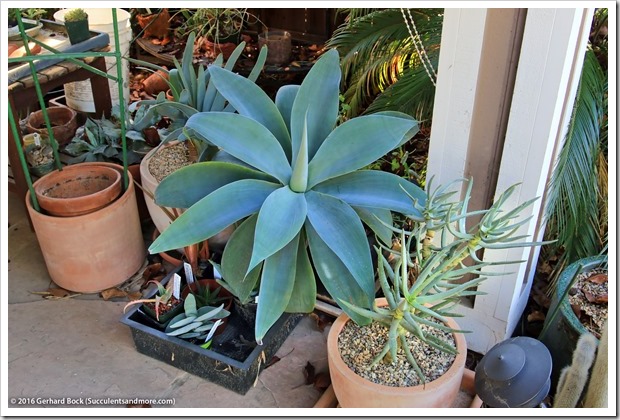 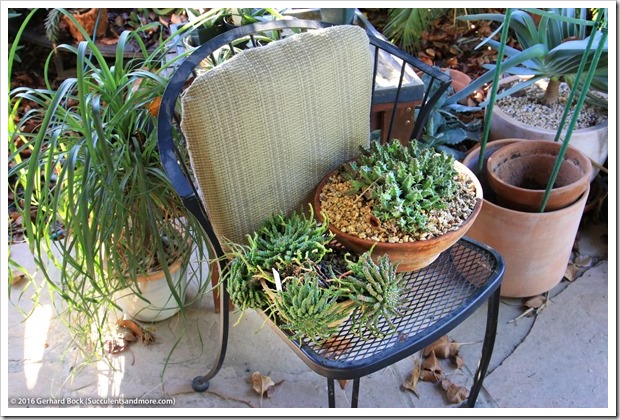 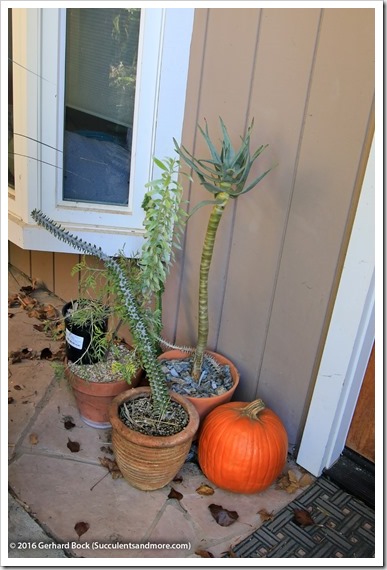 Cluster of potted plants next to the front door, including Aloidendron dichotomum, Leucadendron argenteum, Grevillea ‘Peaches and Cream’ (should have been OK unprotected but there was room), and Alluaudia procera 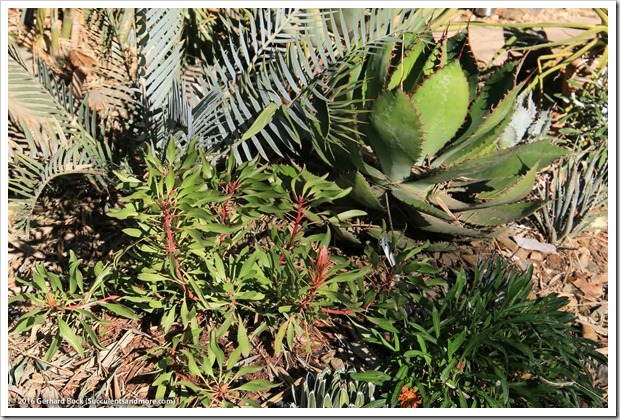 Protea cynaroides ‘Mini King’. Hardy to 28°F according to San Marco Growers but I didn’t want to take any chances because there are several flower buds. 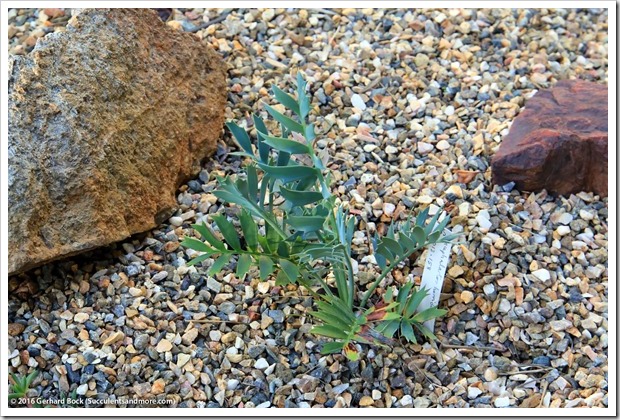 Encephalartos horridus. It tolerates light frost so should have been OK but it’s one of my favorite plants so I decided to protect it a bit.

The Encephalartos horridus above was actually the easiest to protect. All I did was put a terracotta pot over it (with a rock on the drain role). 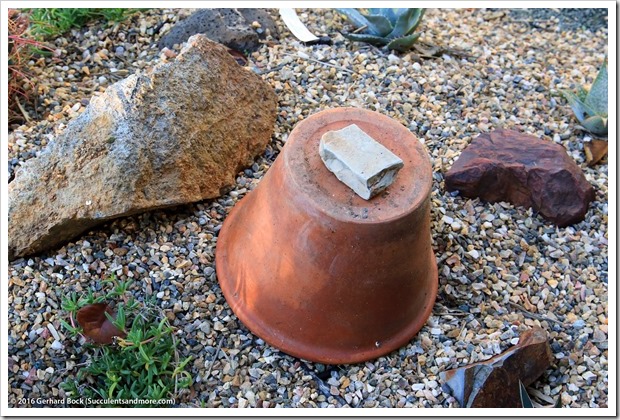 Protecting the other plants involved getting out the frost blankets. Yes, I have quite a few. 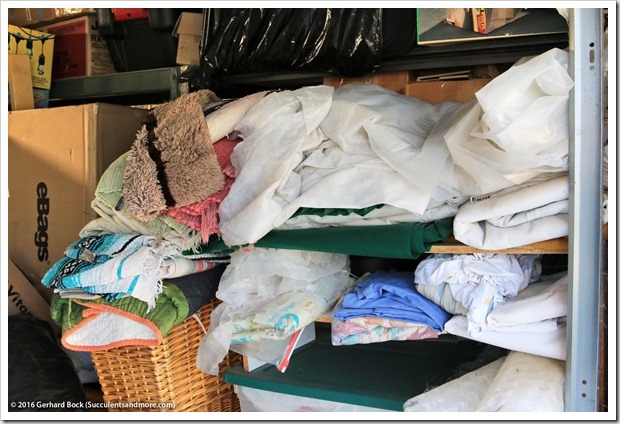 Here they are in place: 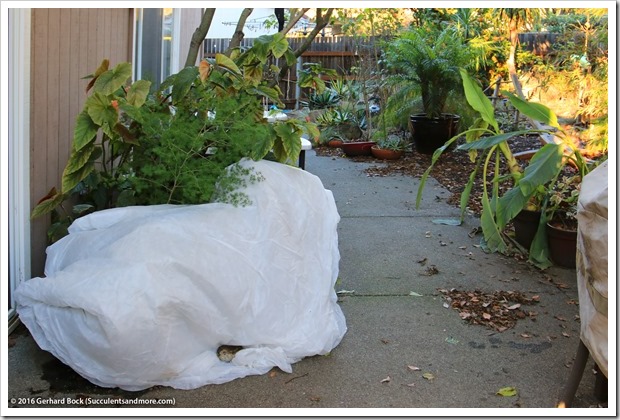 Agave attenuata ‘Ray of Light’ on the back yard porch 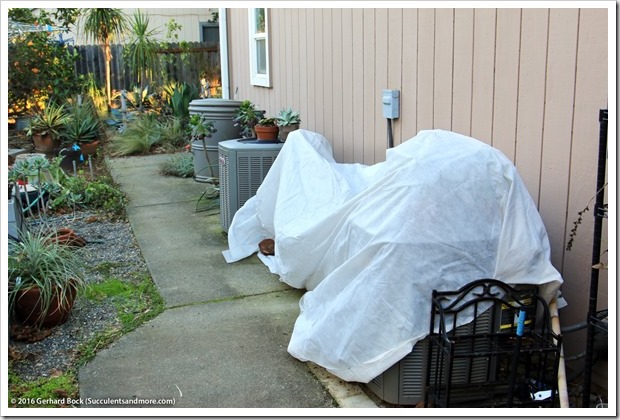 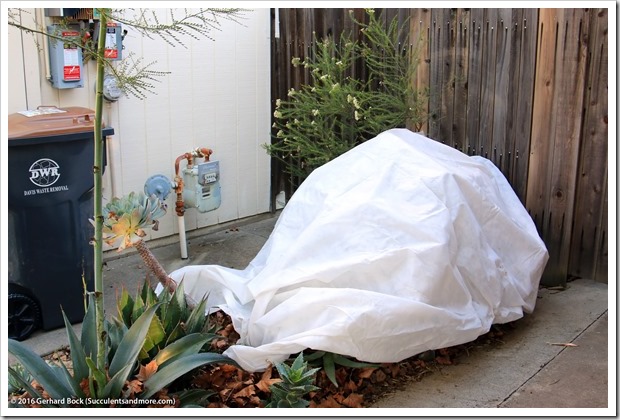 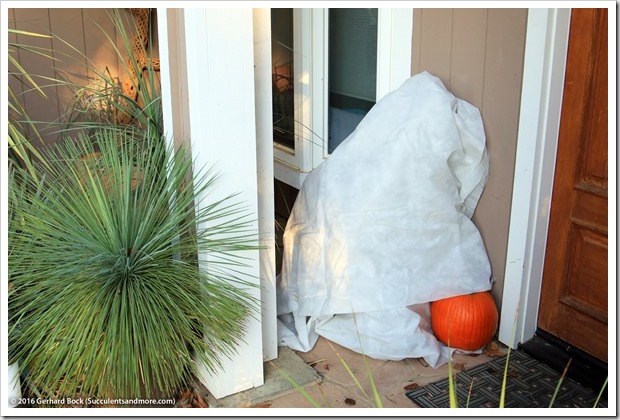 Plants next to the front door 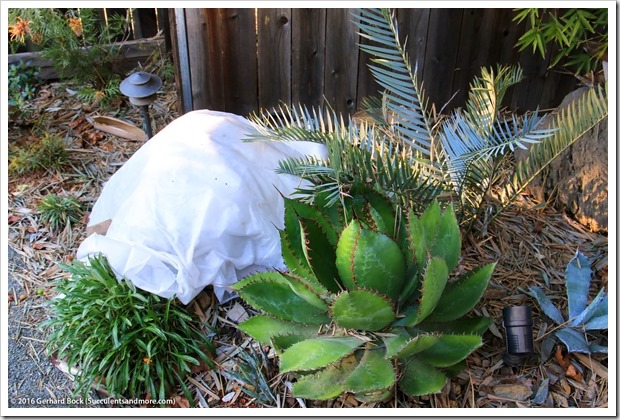 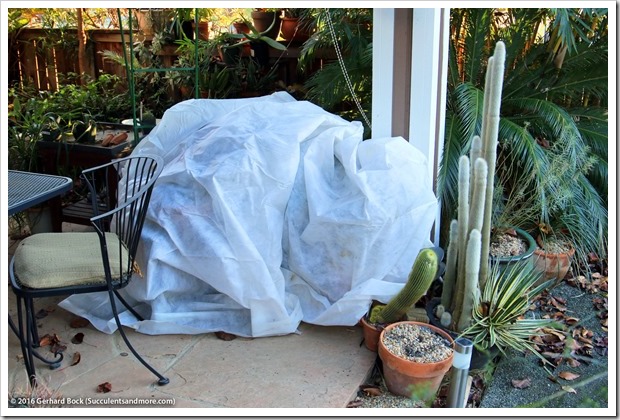 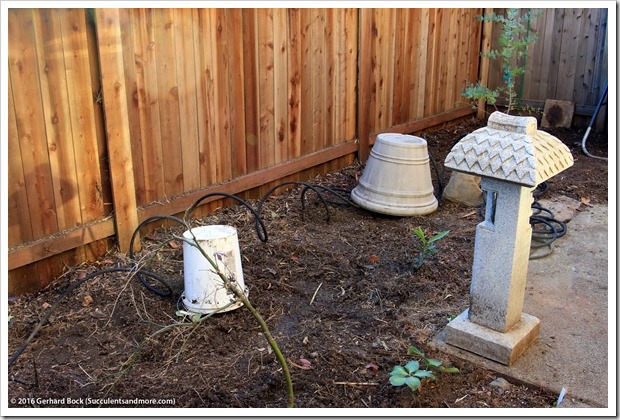 The bucket and the plastic flower pot protect the Banksia grandis and Grevillea ‘Flora Mason’ we planted this morning. Erring on the side of caution here. More about this project in a later post.

Stay warm tonight! I’m keeping my fingers crossed it won’t get quite as cold as the forecast have us believe.