Before and after: what a crew of professionals can do in 5 hours

Today the tree service came and removed two bamboos and an Artistocrat pear tree. Now I can continue with the overhaul of one of the side yards in the backyard and finally do some planting outside the backyard fence along the street. The planting window is still open, so time to get going. Just as soon as the rain lets up (yes, we’re finally having some decent rain).

But let’s back up a little.

The bamboo you see closest to the fence in the photo below is Bambusa multiplex ‘Alphonse Karr’. It’s reasonably attractive and grows very well in our area, even with water restrictions in place. The problem is that there are three bamboos in this spot, and things are getting crowded. After much back and forth, we decided the ‘Alphonse Karr’ had to go.

This is what it looked like a couple of days ago: 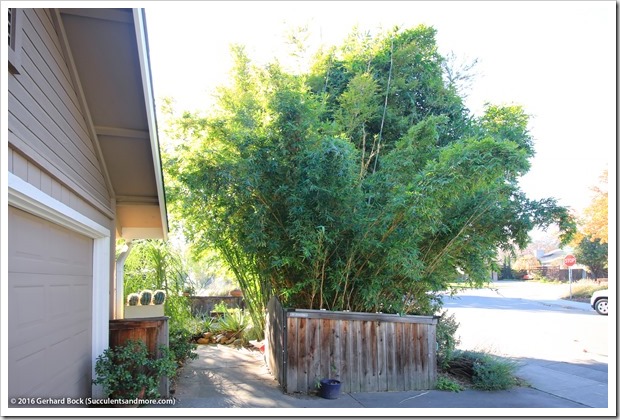 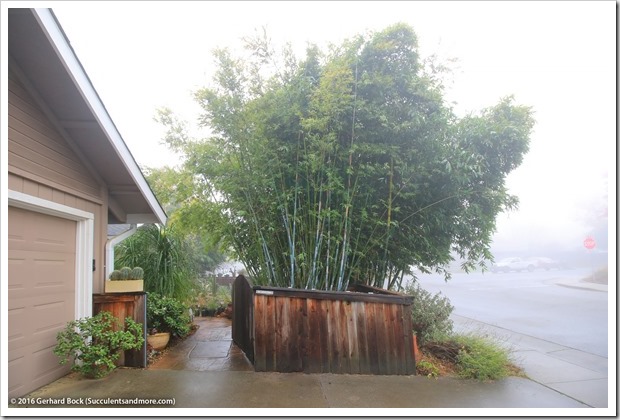 From a different angle, before: 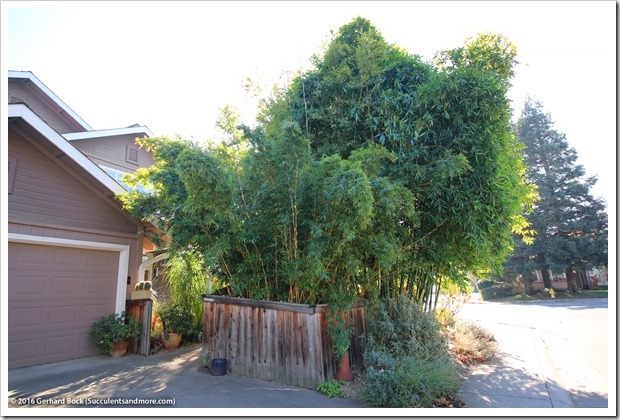 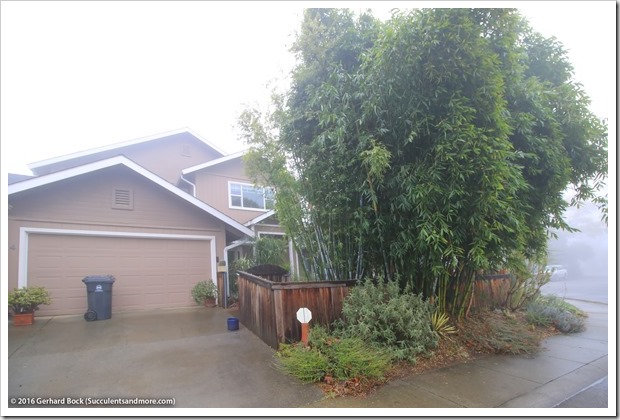 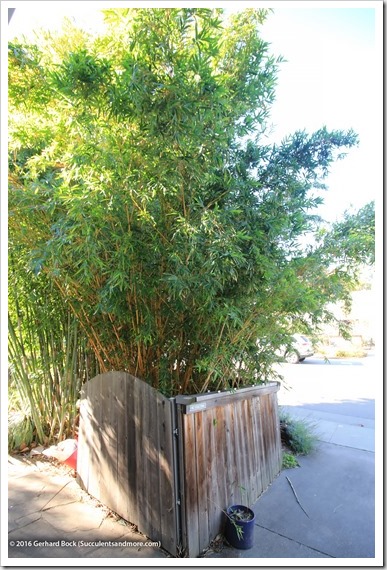 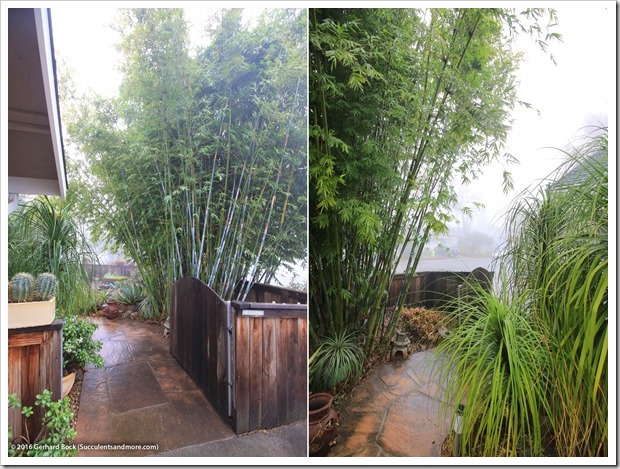 The change is quite radical. All of a sudden, there’s a gaping hole in the corner. 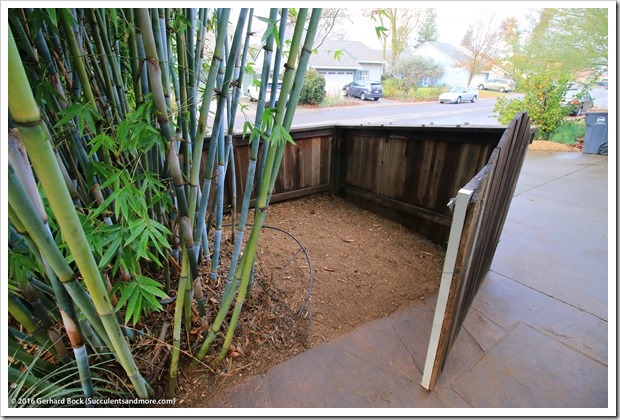 But our baby blue bamboo (Bambusa chungii ‘Barbellata’) is now able to shine. 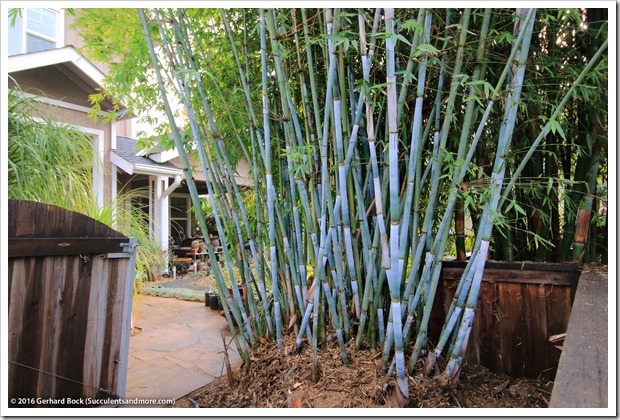 This year’s culms are an icy blue that’s simply breathtaking. The idea here is for the baby blue bamboo to expand into the spot where the ‘Alphonse Karr’ had been. I will remove all new culms that come up on the far side. I’m not sure you can “herd” bamboo that way, but I’ll try. I’m also thinking of planting something temporary along the inside of the newly exposed fence. Maybe a fast-growing vine that will tolerate shade (this is a north-facing exposure). Any suggestions would be more than welcome! 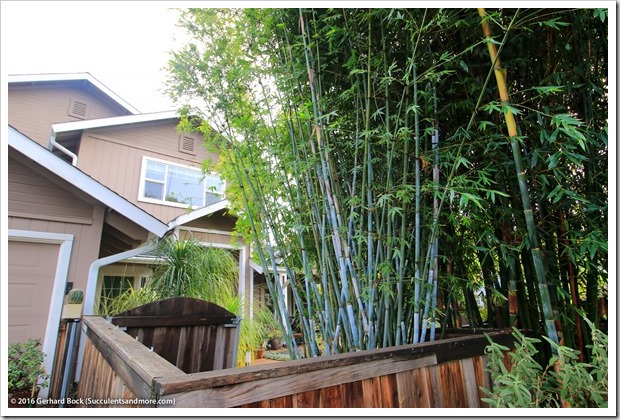 The tree service guys used a chain saw to cut down ‘Alphonse Karr’. It didn’t take them long at all. 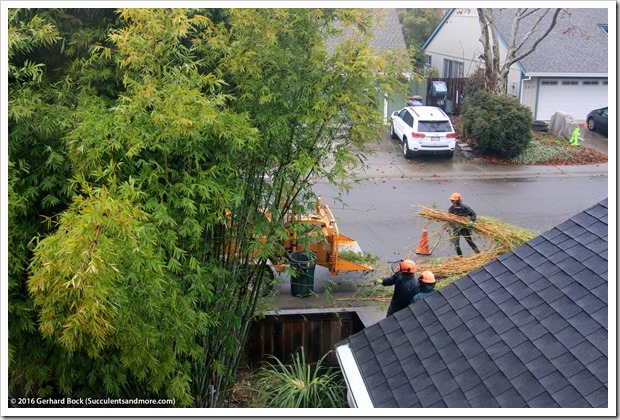 The culms went straight into the chipper shredder. The woody mass in the ground—rhizomes and roots—were cut up using a stump grinder. 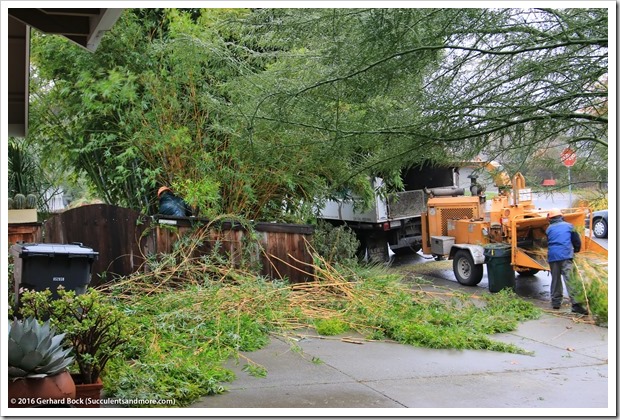 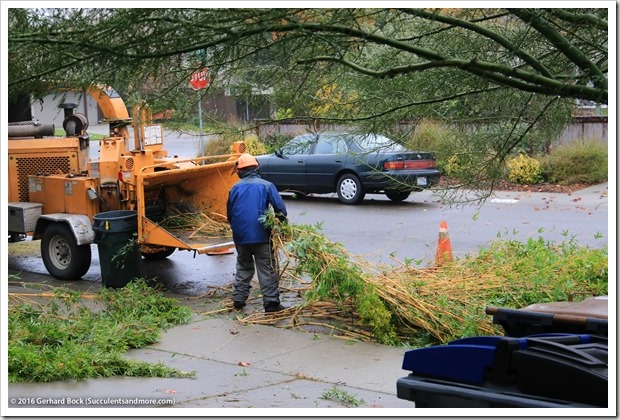 That was ‘Alphonse Karr’ #1. It’s brother in the backyard was much larger: 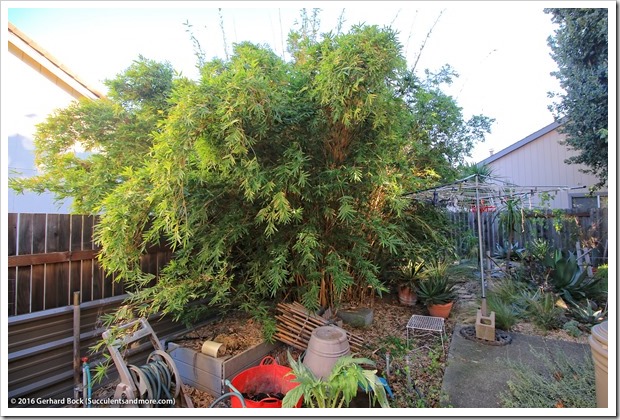 The after is truly shocking: 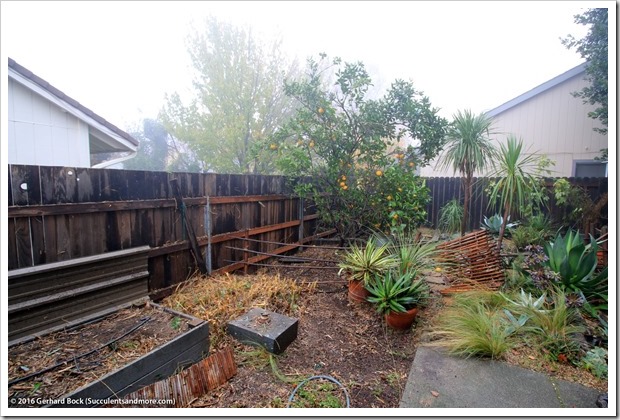 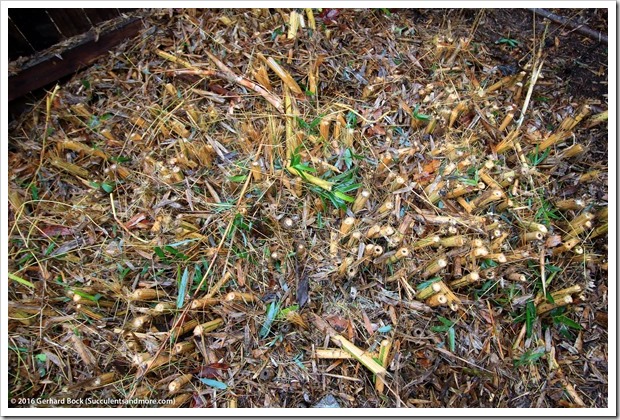 What remained of the culms before grinding

Before, from a slight different angle: 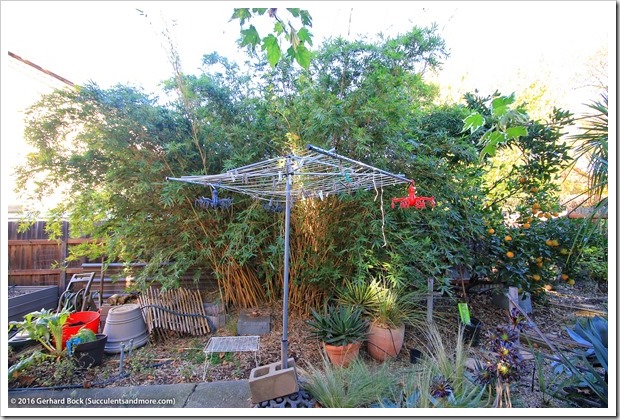 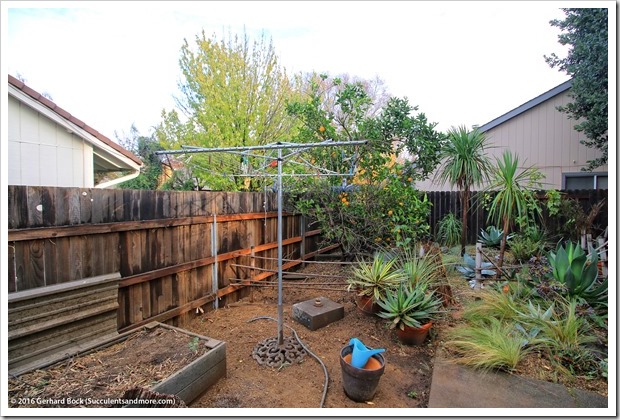 There were several reasons for removing this clump of ‘Alphonse Karr’. We wanted a better place for the clothesline, which we use six months of the year. Before it was on the edge of the concrete walkway, constantly getting caught in the bamboo. Now it’s over to the side where ‘Alphonse Karr’ had been.

Secondly, I wanted more light in this north-facing spot. The bamboo had simply gotten too big. In fact, it had crowded and shaded one side of our Washington navel orange tree so much that it’s completely dead now. Now we’ll be able to properly prune/shape this old tree to give it a new lease on life. And I’ll be able to plant something against the fence, maybe an espaliered fruit tree? Or an espaliered conifer? I’ll take my time to thing about it. 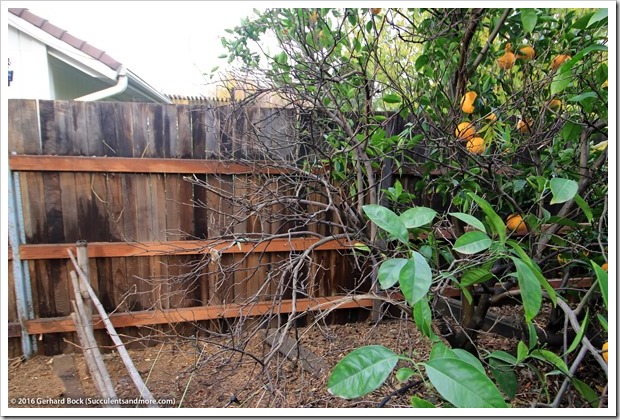 The final item that was removed was what had started this project in the first place: a nasty Aristocrat pear tree in the far corner of the backyard. This is where the backyard meets the front yard. See that little fence behind the tree in the next two photos? Behind it is the “hidden” corner in the front yard, adjacent to the front porch. 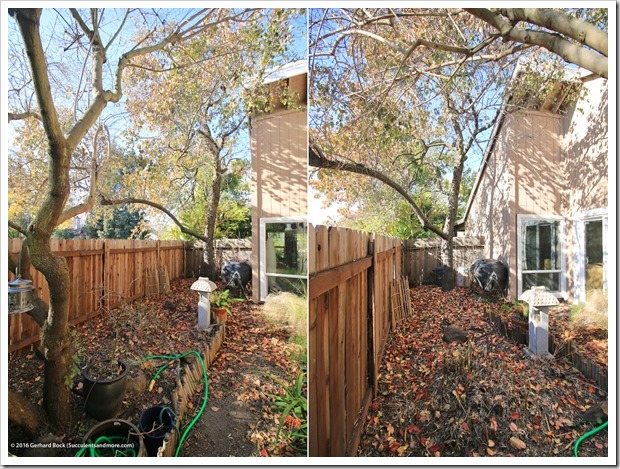 I hated this Aristocrat pear almost as much as I hate the City-of-Davis-owned and hence untouchable Bradford pear nearby (in my mind, there’s really no difference between the two): Its wood is brittle so bits and pieces are falling from it all the time; it suckers like mad; its flowers have a nasty smell; its fruit causes a mess in the fall. In addition, this tree had fireblight, causing its leaves to be unsightly. I can’t even remember why we chose to live with this tree for close to 20 years. 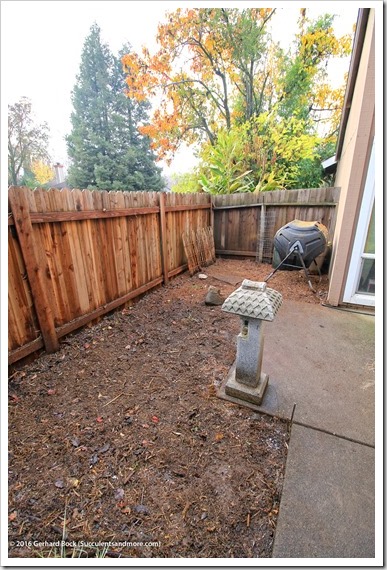 So much space! We can finally use the compost tumbler again. And I can replant this entire bed. In the corner where the Aristocrat pear had been I’ll plant an Acacia baileyana ‘Purpurea’ (I already have it; it was a gift from a friend and is currently growing in a 15-gallon container). Along the fence I’ll plant a Grevillea ‘Flora Mason’ and a Banksia grandis (the compact coastal form). Closer to the walkway there’ll be room for a few other recent purchases, including Heuchera maxima and two choice Helleborus from the UC Davis Arboretum. And closer to the chaste tree I’ll finally put that little potted Japanese maple (Acer palmatum var dissectum 'Red Dragon') in the ground. It hasn’t been happy because it doesn’t get enough water in its glazed pot but it hasn’t died either. It deserves a chance for a better life. 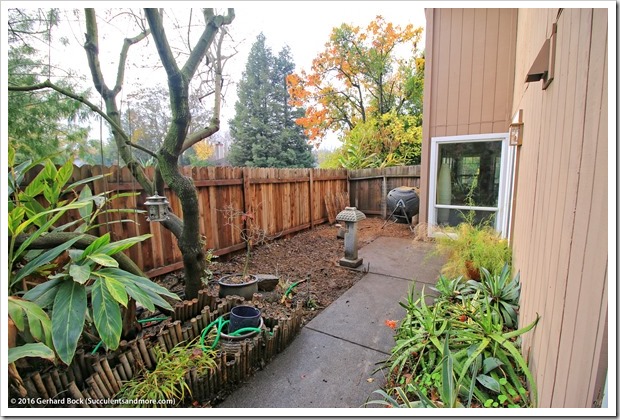 “Before” view of the Aristocrat pear from the street (the city-owned Bradford pear is all the way on the left): 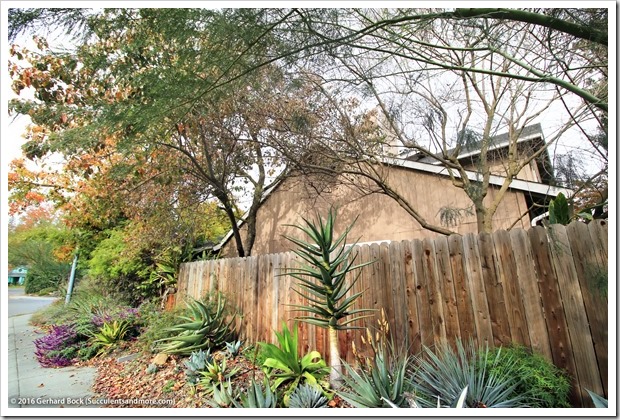 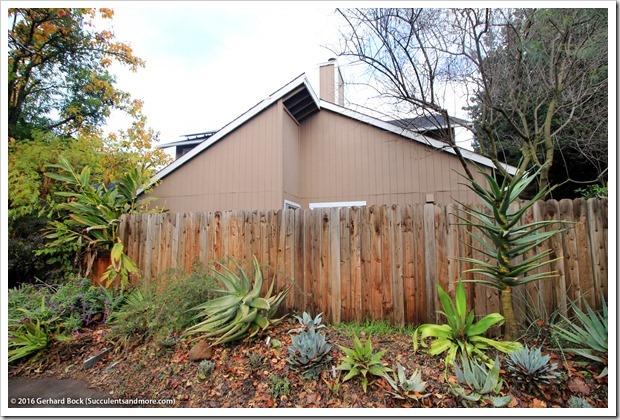 Another upside: There’ll be far fewer leaves to remove from my succulents in the fall. And no more tree suckers escaping from under the fence.

One major change that will happen here: The empty spot between the Aloe ferox on the left and Aloidendron ‘Hercules’ on the right—where a patch of weeds has sprung up seemingly overnight—will be filled with the ‘Ruth Bancroft’ manzanita (Arctostaphylos ‘Ruth Bancroft’) I bought earlier in the fall. It will look fantastic here.

Hiring a tree service isn’t cheap, but considering how much this crew of three accomplished in five hours, they were worth every penny. If you live in Yolo Country and need a tree service, give Alliance Tree Service a call. We’ve tried several other companies over the years, but Alliance is heads and shoulders above the rest. Even if they’re busy, I’d rather wait for them than chance it with somebody else.