Showing posts from March, 2018
Show all 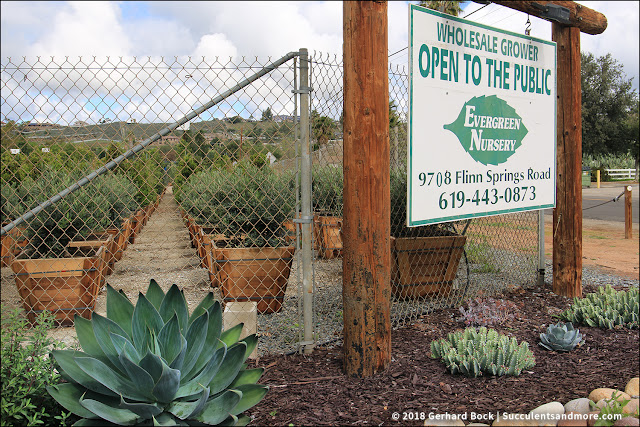 Last weekend I spent a whirlwind 48 hours in San Diego . My first stop on Friday morning was Evergreen Nursery , a wholesale grower open to the public. The company has three locations: San Diego proper, Oceanside, and El Cajon. The El Cajon location was holding an Aloe ortholopha for me, so that's where I was headed. Evergreen Nursery is right off Interstate 8 northeast of town. Surrounded by hillsides, green at this time of year, the rural location is beautiful. What makes Evergreen Nursery so special is that it's a drive-through nursery. That was definitely a first for me. This is how the company explains the " Evergreen System :" Just follow the Evergreen 3 step system:  1. Drive through or park and shop (you may load directly into your car) 2. Ask Questions 3. Pay at the Checkout Booth Evergreen's pricing system is designed for your ease and convenience. Plants are priced by the container size. The plants are color coded (the color code is on
15 comments
Location: 9708 Flinn Springs Rd, El Cajon, CA 92021, USA
Read more 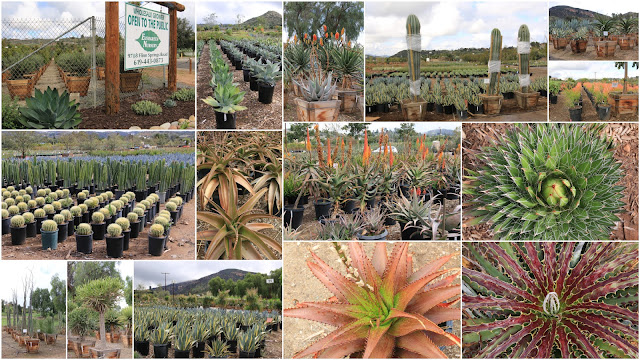 I know I do crazy things now and then. Last weekend ranks right up there. I flew to San Diego from Sacramento early on Friday morning (flight time is only 1:20 hr), went to the Succulent Celebration at Waterwise Botanicals; toured one of the most beautiful private succulent gardens I've ever seen; explored Rancho Soledad Nursery, the source of many popular agaves like 'Blue Glow' and 'Blue Flame'; met up with some fellow succulent fanatics at the Succulent Cafe; and checked out Jeff Moore's nursery Solana Succulents. I arrived back home at midnight on Saturday. 48 hours of total succulent madness! I took over 900 photos, so it'll take me a while to go through them all. Here are a few collages to give you an idea of what I saw. My very first stop was at Evergreen Nursery in El Cajon, east of San Diego. They were holding a hard-to-find  Aloe ortholopha for me. Evergreen Nursery is a wholesale-but-open-to-the-public nursery with three locations in the San
6 comments
Location: Escondido, Kalifornien, USA
Read more 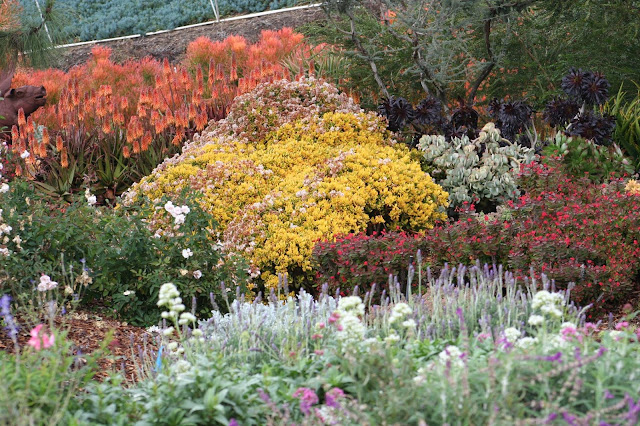 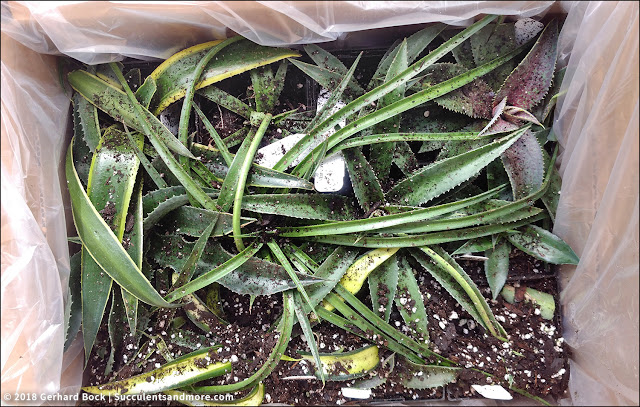 A couple of weeks ago I proclaimed 2018 to be the year of the mangave . This was based on the ever increasing number of hybrids becoming available in nurseries, and the growing popularity of these harmless half-siblings of the spiky agave. If you haven't seen the variety of leaf textures and colors offered by the latest crop of mangaves, check out my earlier post . I'm sure you'll find a few that you like even if you're not fond of agaves. A week after my mangave post, UPS delivered two mystery boxes to our doorstep. Guess what was inside? Box 1:
13 comments
Read more 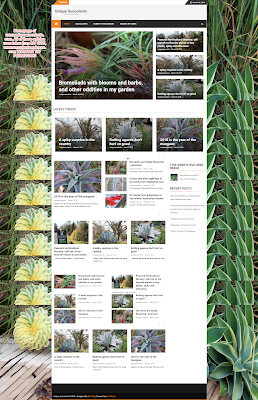 Bromeliads with blooms and barbs, and other oddities in my garden 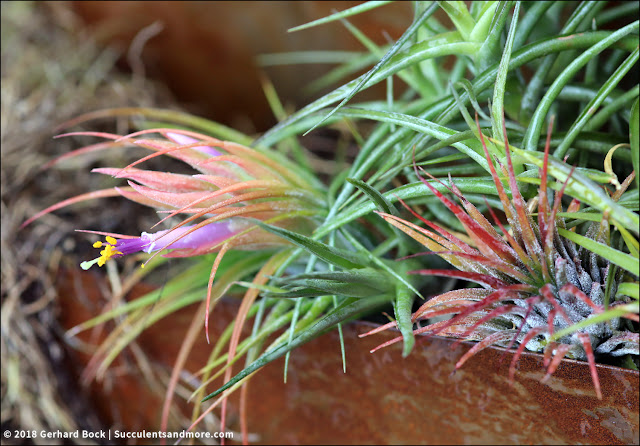 Cacti, agaves, yuccas and their kinfolk may have been around the longest in our garden, but they're not the only spiky residents. More recently, they've been joined by members of a different family: bromeliads. These aren't succulents, but they're just as alluring. While some bromeliads have armaments as fierce as those of cacti or agaves, others are very user-friendly—especially tillandsias, the much-beloved air plants that have conquered by the world by storm in recent years. My first tillandsia experience about 10 years ago didn't have a happy ending, but I learned a valuable lesson: air plants can't live off air alone; they do need water. My current crop of tillandsias, acquired in January, lives outside in metal wall planters, and I mist them once a week (or rather, I try  to). Whatever I'm doing must agree with them, because to my shock and surprise, one of them is actually flowering! Tillandsia ionantha This may not be a big deal to people wh
11 comments
Read more

Peacock Horticultural Nursery: still one of my favorite places to buy plants, spiky and otherwise 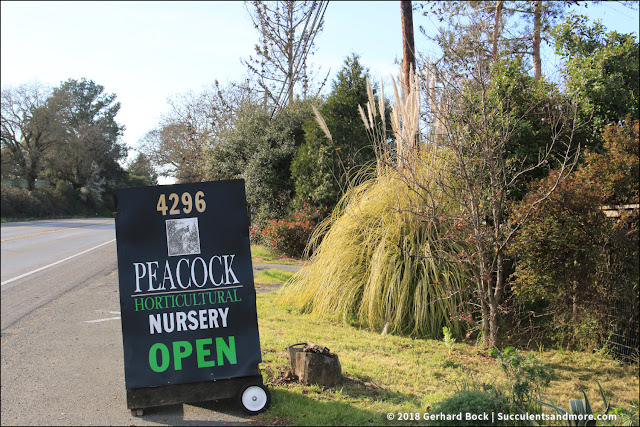 On Saturday I had the opportunity to revisit one of my favorite nurseries: Peacock Horticultural Nursery  in Sebastopol, Sonoma County. If traffic is smooth, it's a 90-minute drive from Davis—unfortunately, not close enough to go as often as I'd like. But as you can see in this image-heavy post, it's such a special place that I've vowed to return soon. Peacock Horticultural Nursery is owned by Robert Peacock (hence the name) and Marty Waldron. It's the kind of nursery that has become rare in this age of big box stores and garden centers: a place run by true plant lovers—plant nerds, you might say—where plants are front and center. And I'm not talking about the few dozen mainstream plants you find at Lowe's, Home Depot and OSH. What PHN carries is the antithesis of that. Or, as I like to say, the antidote . The 80+ photos below are ample proof of that. PHN is not a sterile business in a commercial strip. Instead, it's literally Robert's and M
17 comments
Location: 4296 Gravenstein Hwy S, Sebastopol, CA 95472, USA
Read more

A spiky surprise in the country 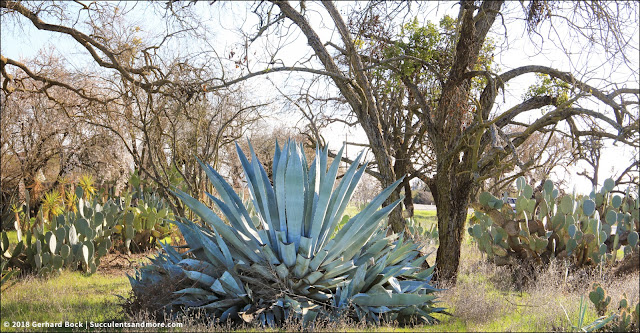 I live in Davis, about 15 miles west of Sacramento, the capital of California. Our town of 65,000 is surrounded by a flood plain to the east and agricultural land everywhere else. As soon you leave the city limits, you're in the country. This fact became very clear when I visited Three Palms Nursery . Located about 7 miles west of downtown Davis, the nursery is located all by its lonesome in the middle of fields. A peaceful and bucolic spot indeed. But the topic of this post isn't Three Palms Nursery although I'm planning a return trip later in the month. Rather, I want to you show you what I found on the way home. Just before you enter Davis proper, there's an empty lot at the intersection of two county roads. Except it's not exactly empty. True, there's no house on it, but somebody has been using it as their desert garden. It's conceivable that some of the Agave americana and prickly pears appeared on their own—they do naturalize around here. But th
5 comments
Read more 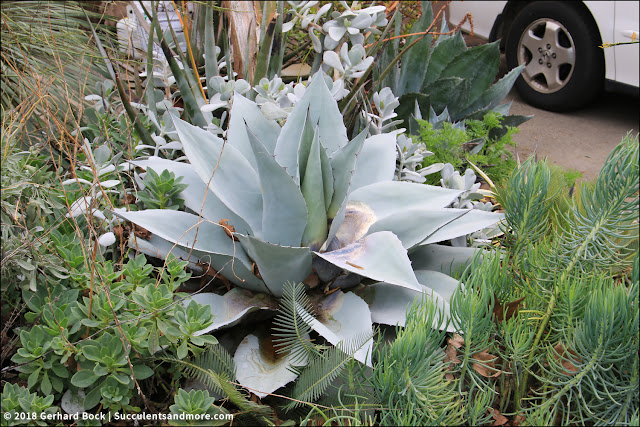 When John Mellencamp wrote his song " Hurts So Good ," he definitely wasn't thinking of two of his favorite agaves rotting away. That , my friends, does not hurt so good. In fact, it hurts quite  bad . Both agaves are next to each other in the same bed along the driveway. And a third one in the same bed is showing signs of rot, too. Let's take a look. Be sure to grab a Kleenex. Agave #1 is a beautiful specimen of Agave ovatifolia 'Frosty Blue'. It's nowhere near its adult size yet, but it has such a great presence. Look closer. It's impossible to miss.
19 comments
Read more 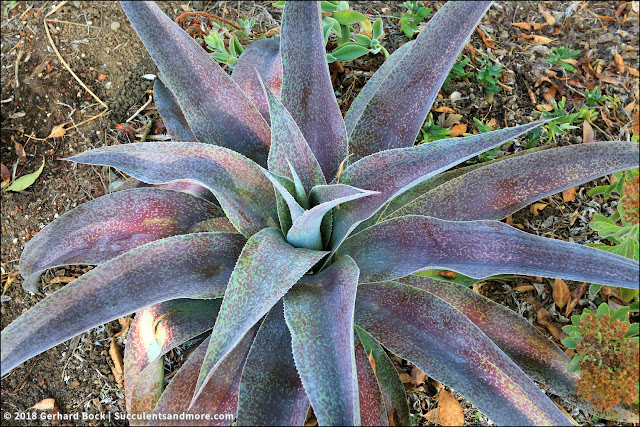 Agaves are great the way they are. But do you know what's even cooler? The love children from a hanky-panky between an agave and a manfreda! Manfredas are succulents with soft, floppy leaves, often with pronounced purple spots. I'm sure you've seen the cultivar with wavy-edged leaves called 'Chocolate Chip' ( here ). Some species in the genus Manfreda are quite hardy, especially especially Manfreda virginica and Manfreda maculosa , both native to the U.S. Now imagine combining the best qualities of both genera, manfredas and agaves. The result is bound to be special. As you look at the photos in this post, I'm sure you will agree. From what I was able to gather, the first recorded cross between a manfreda and agave was from seed legendary plantsman Carl Schoenfeld (the last owner of the now defunct Yucca Do Nursery in Texas) collected in Mexico. The seed came from a Manfreda variegata  but the seedlings clearly showed agave traits, most likely from Agave
20 comments
Read more
More posts