Let’s take another look at the DBG map: We’re still on the Desert Discovery Loop Trail… 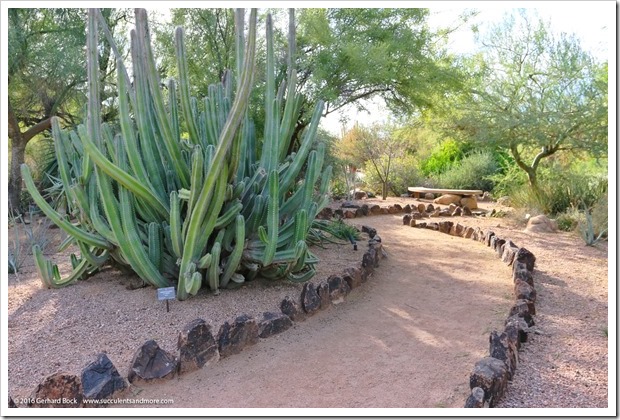 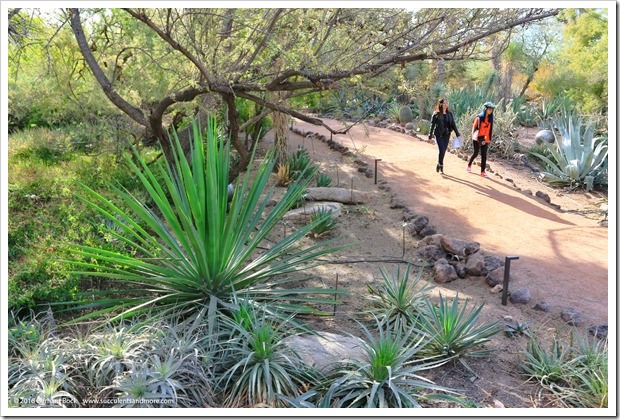 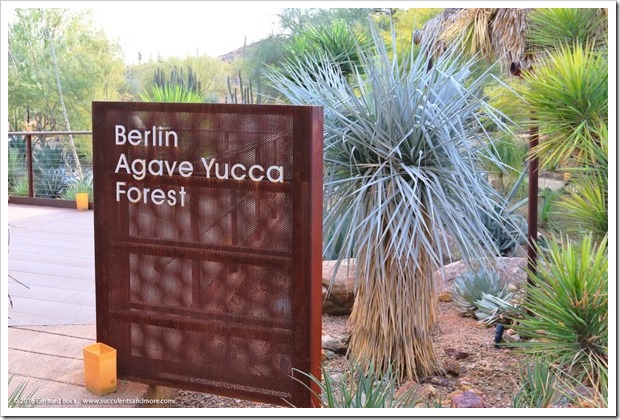 As the name already suggests, there is a high density of agaves in this exhibit. You can view them from a walkway that crosses the wash. (The most agaves are actually found in front of the Desert Research and Horticulture center nearby. See this very detailed 2-part post about agaves at the DBG.)

In previous years my photos focused on plants, and many of my images were closeups. This time I tried to include more photos of people in the garden. This not only gives a human perspective, it also adds a sense of scale. 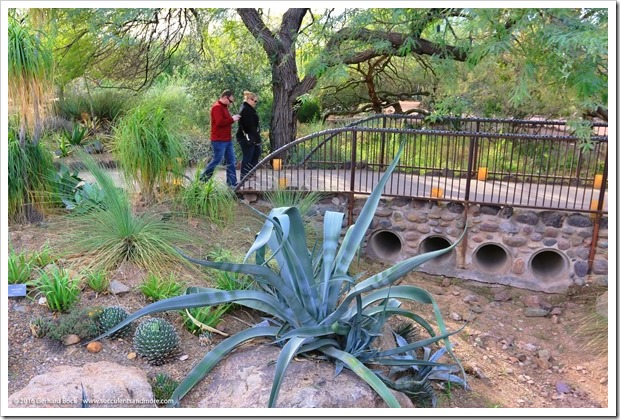 Agave mapisaga var. lisa, one of the largest agaves in existence (this one still has years to go) 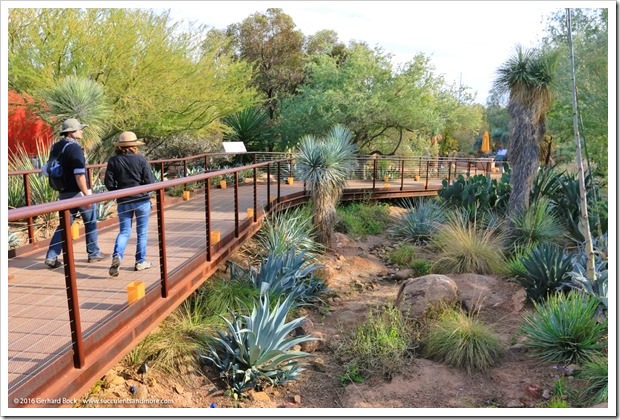 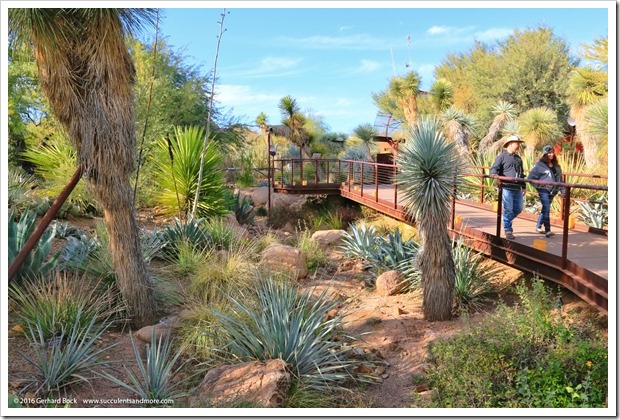 Across from the Berlin Agave Yucca Forest, on the edge of the Sybil B. Harrington Cactus and Succulent Galleries, is the DBG’s aloe collection. Because of the harsh light, I’ve never been able to take the photos I want. The collection isn’t big in terms of square footage, but it comprises a large number of species, many of them rarely seen. If I ever make it to the DBG on an overcast day, I’ll be able to take better photos. 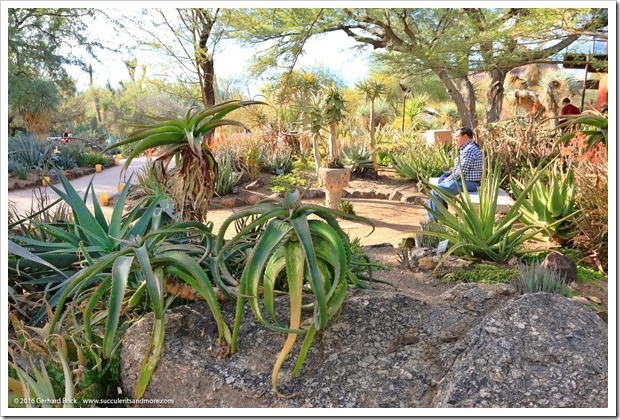 NOID aloe. Unfortunately, the labeling in the aloe collection is particularly sparse. 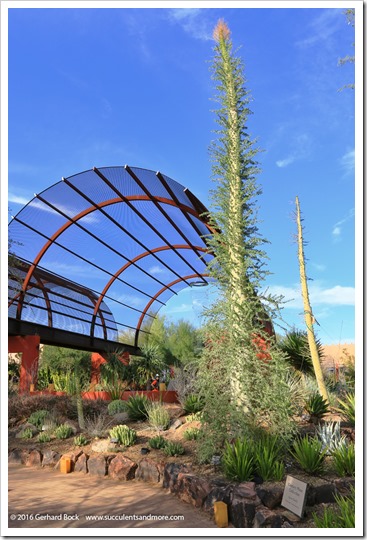 Another Boojum tree (Fouquieria columnaris), one of the botanical wonders of Baja California 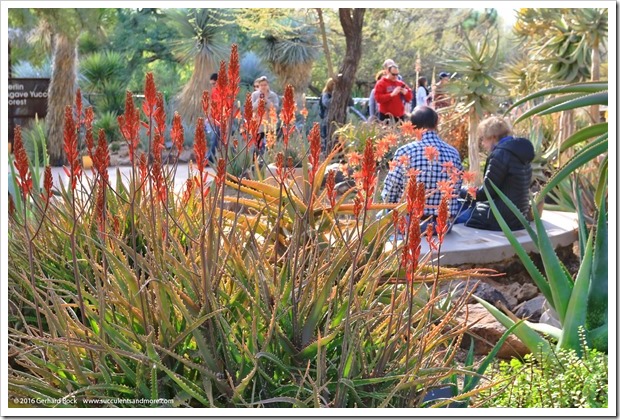 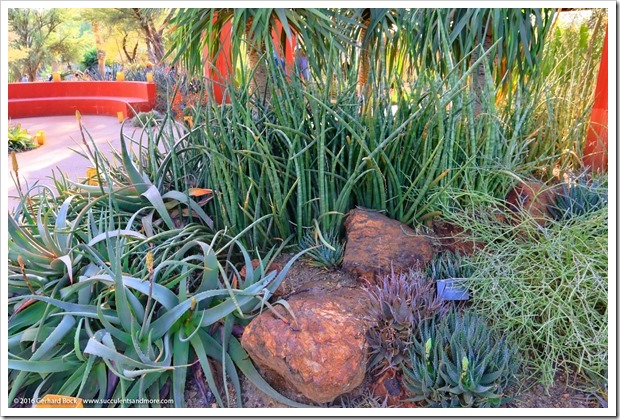 In the background: Sansievieria cylindrica 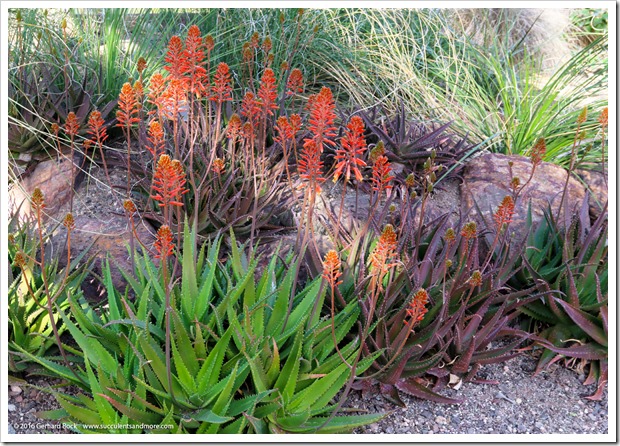 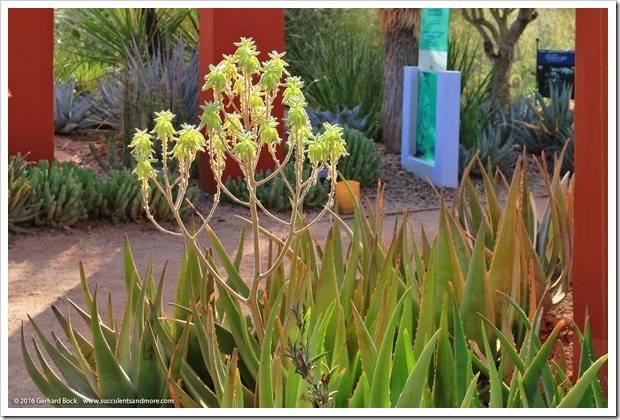 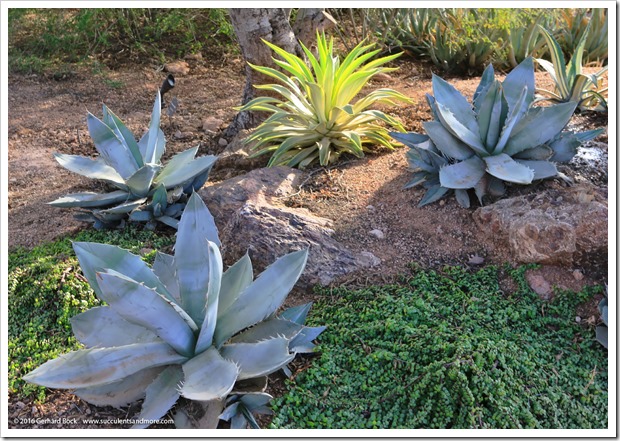 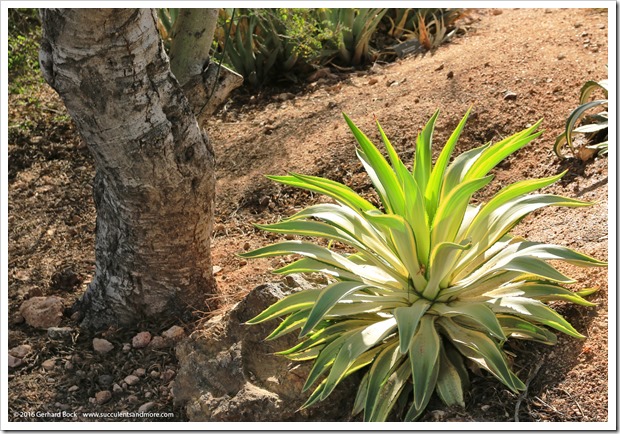 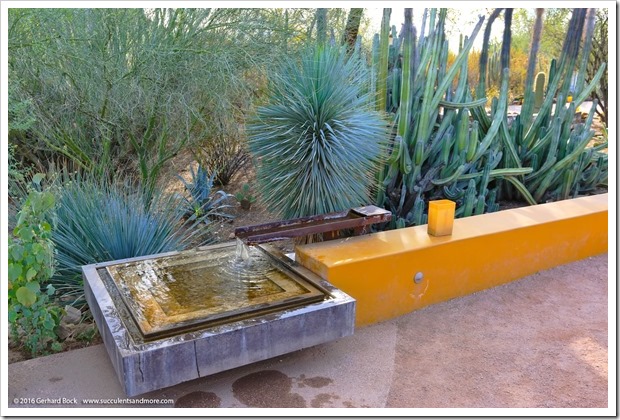 The plaza that connects the two sections of the Sybil B. Harrington Cactus and Succulent Galleries was occupied by a curious-looking dome. 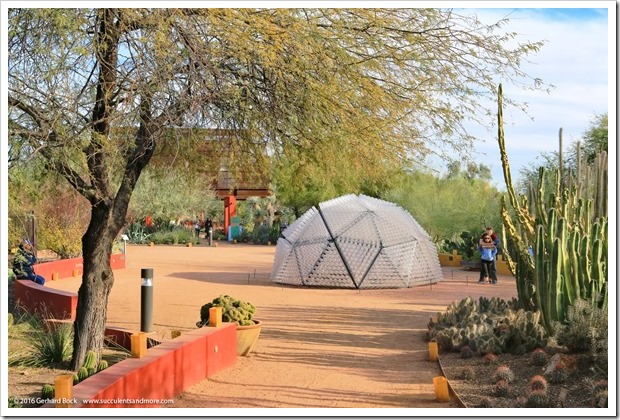 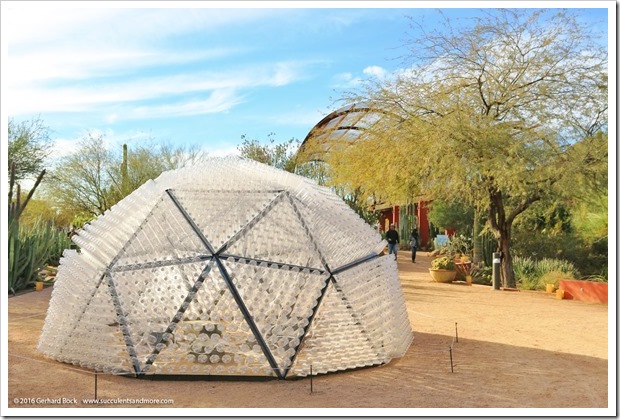 In reality, it was another piece of Bruce Monro’s Sonoran Light exibihit. It’s called Beacon and consists of hundreds of soda bottles equipped with color-changing fiber optic lights. You’ll see it at night in a separate post. 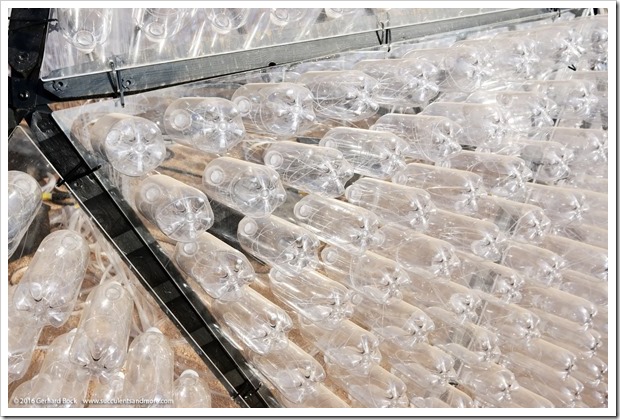 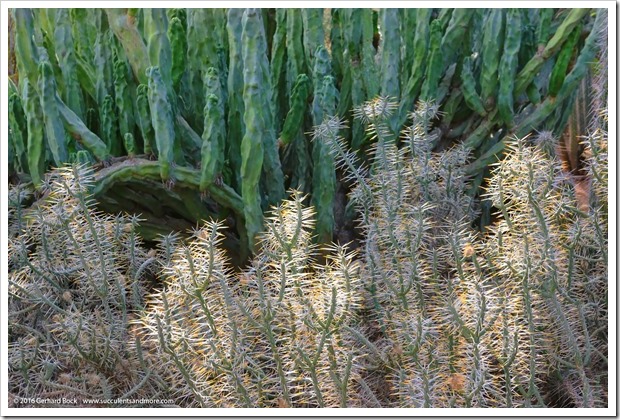 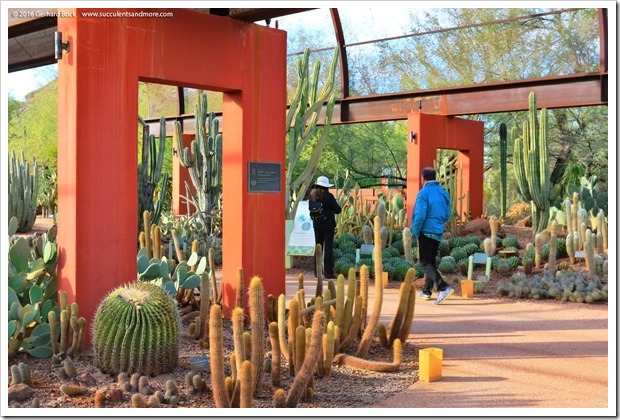 In the Sybil B. Harrington Cactus and Succulent Galleries 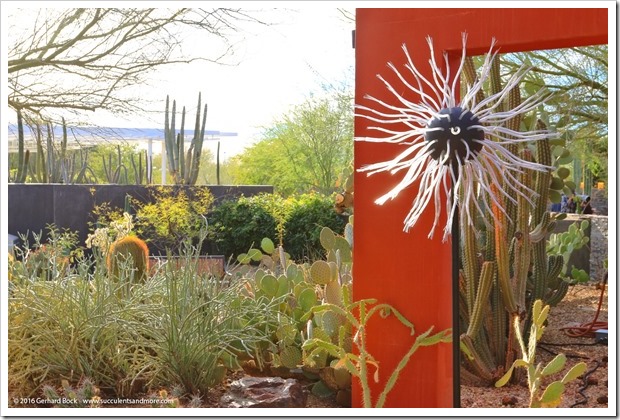 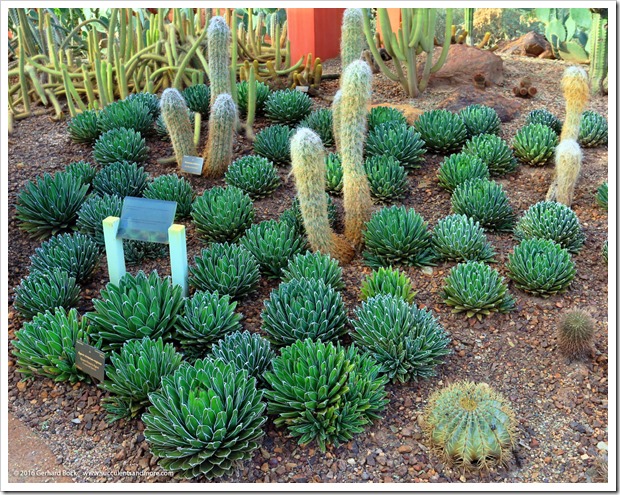 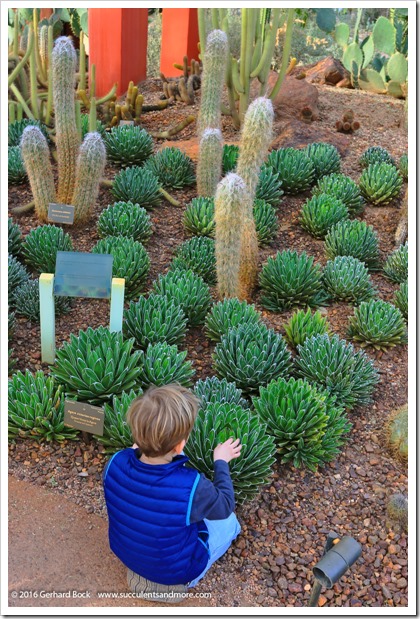 This boy was completely enthralled with these Queen Victoria agaves 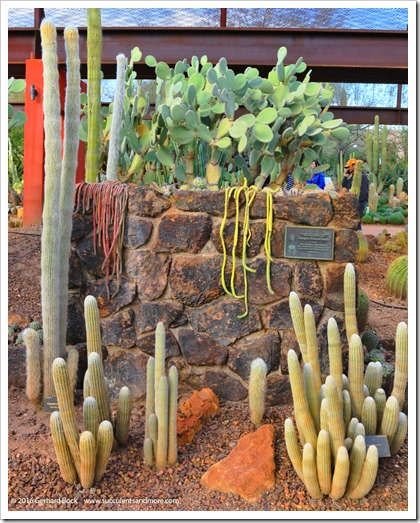 Great example of the rock work in the Sybil B. Harrington Cactus and Succulent Galleries

The tall cylinders you see in the last photo of this post are water-filled soda bottles equipped with color-changing fiber optics. Called Water Towers, they’re the signature piece of Bruce Monro’s Sonoran Light exhibit, on display at the DBG until May 8, 2016. Now that I’ve teased you with daytime photos of the Sonoran Light exhibit, check out this post to see the pieces in all their nighttime glory.