In previous years I went overboard when it came to covering plants on nights with temperatures below freezing (see here: 2011 | 2012 | 2013). This winter I decided to relax and cover only one plant: my Agave attenuata ‘Boutin Blue’, which starts to shiver when temperatures fall into the 30s.

While we hit 32°F six times in December, we only dropped below it once: on December 27. That was the day I headed out on my trip to Southern California and Arizona. I left our house at 6 a.m. and the thermometer in our backyard read 29°F, which meant it was a degree or so colder in the front yard. Indeed, the official low for Davis was 28°F—a balmy night in many parts of the country, but a c-c-c-c-cold one here.

For some reason, 28°F seems to be a magical number for many succulents. They’re fine at 30°F but start to show damage at 28°F and go into a serious tailspin at 25°F or below. The photos I’ll show you below bear out this observation.

To put things in a perspective, while my not-bothering-to-cover-things experiment was partially successful—plants I thought would get damaged at 28°F didn’t—other plants did. However, the damage appears to be cosmetic only, and all affected plants should survive. 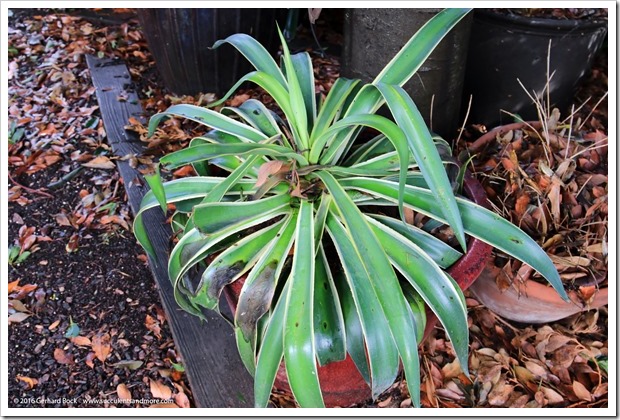 Agave desmettiana ‘Variegata’, one of many offsets from the plant that used to be next to our front door but flowered and died last year. 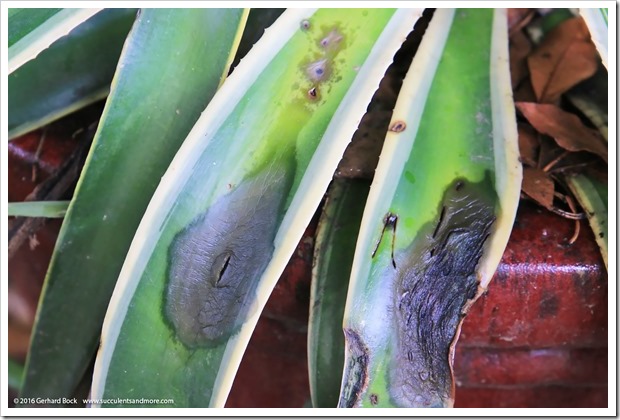 It’s in a large pot under the bay trees in the backyard where it should have been protected enough. It has some pretty unsightly cosmetic damage and will live However, I’m done with this particular agave and will replace it with something else. 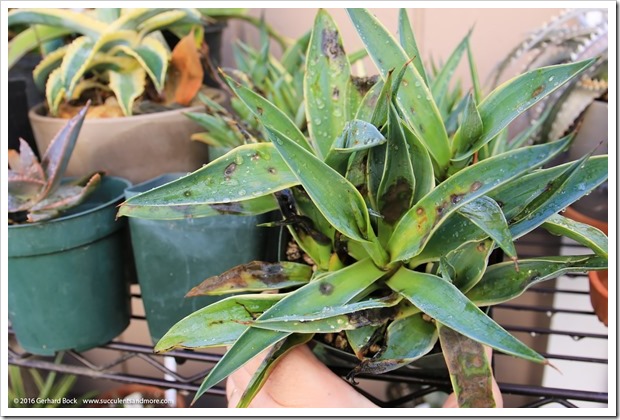 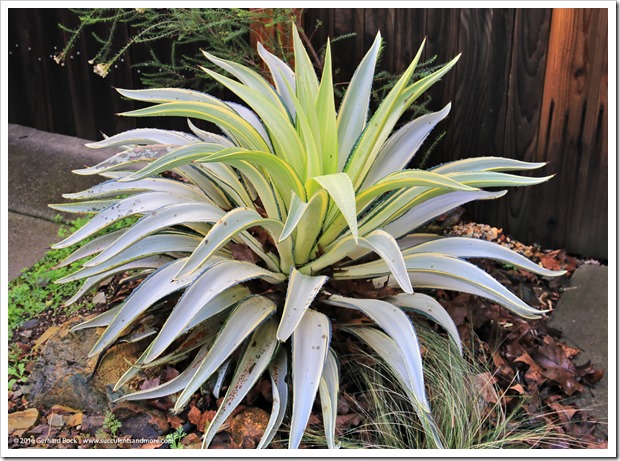 Agave desmettiana ‘Joe Hoak’, growing in the ground between our house and our neighbor’s 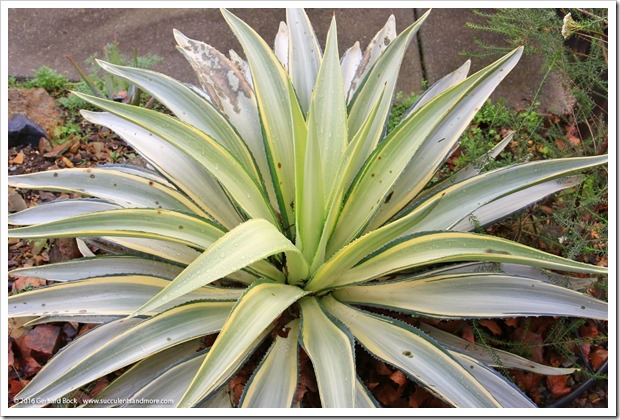 Again, only minor cosmetic leaf damage, but I’m annoyed at myself because I could have prevented it altogether by throwing a frost cloth over the plant 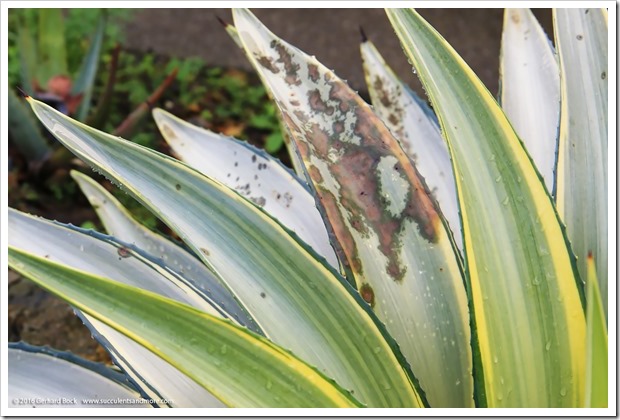 The black spots will be visible well into the summer, reminding me to be more vigilant next winter 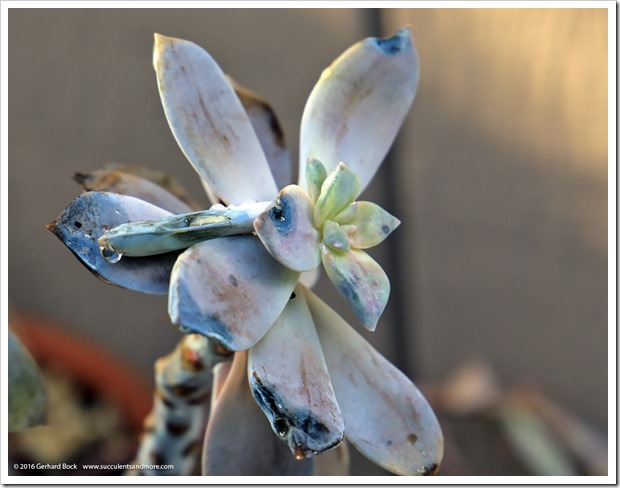 Graptopetalum pentandrum ssp. superbum. This level of damage is surprising because I don’t remember covering it in previous years. But it, too, will live. 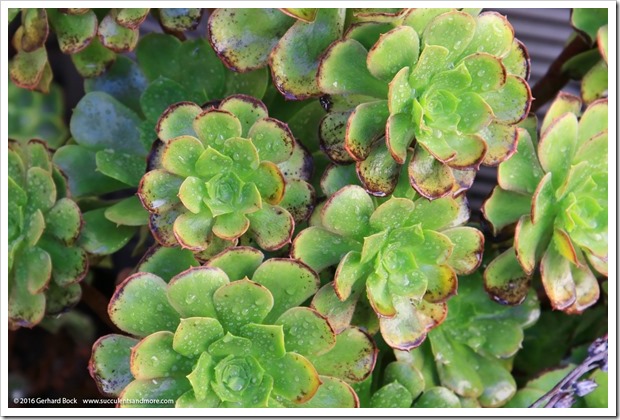 The aeoniums in the backyard only sustained minor damage (like this). They’re up against the house and fairly well protected. 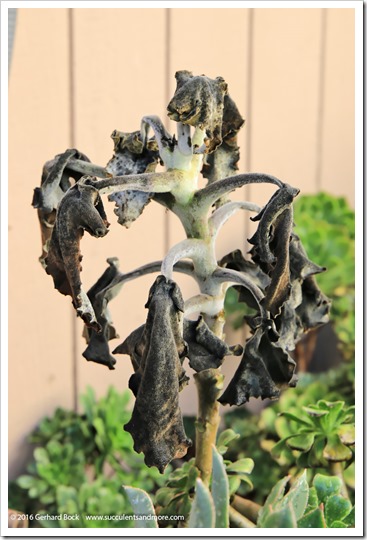 Kalanchoe beharensis with significant leaf damage. This doesn’t come as a surprise since this species (like most kalanchoes) is very frost-sensitive. Still, it will live and push new leaves. 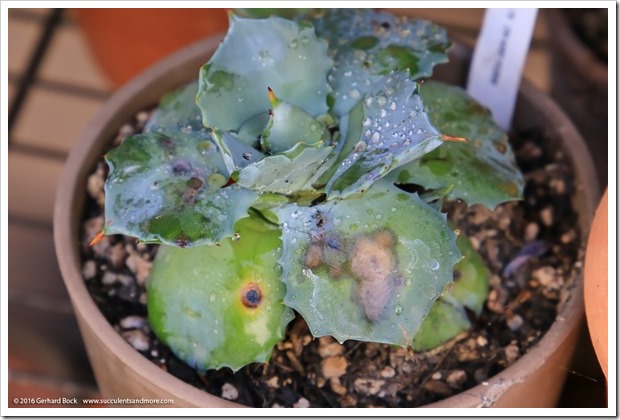 Agave potatorum ‘Shoji Raijin’ with enough cosmetic damage that I’m officially evicting this slow-growing dwarf cultivar from my collection (it’s not a favorite of mine anyway). Agave potatorum once again proved its wimpiness. 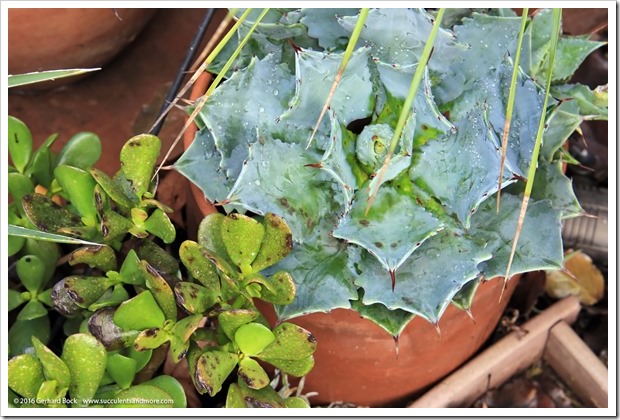 The closely related Agave isthmensis in the front yard fared a bit better, with only a few leaf spots. The volunteer jade plant (Crassula ovata) seedling on the left has leaf damage, too… 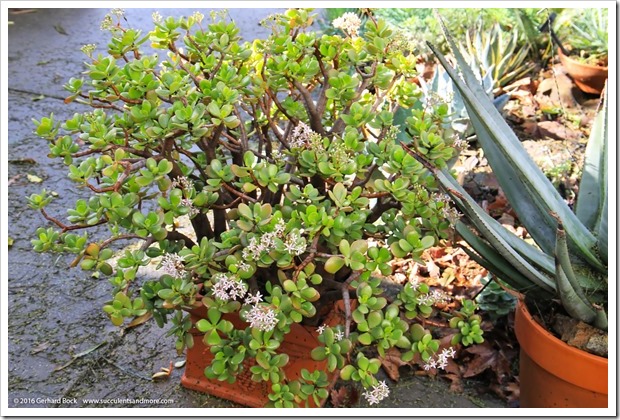 …while this much larger jade plant next to the driveway (blooming, no less!) is completely unharmed. It could be because of a temperature difference as minor as 1°F. 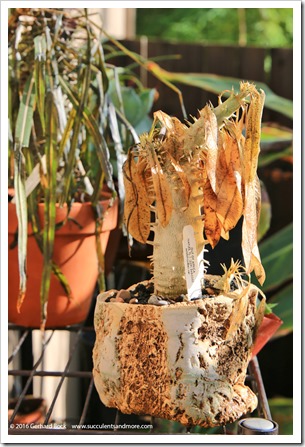 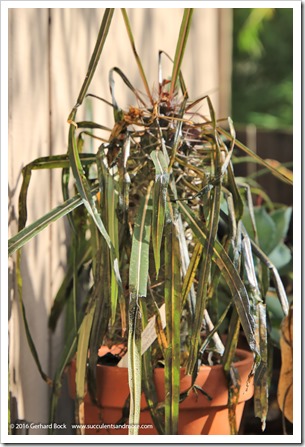 Two pachypodiums that are losing their leaves (but not their lives): Pachypodium eburneum (left) and Pachypodium geayi (right) 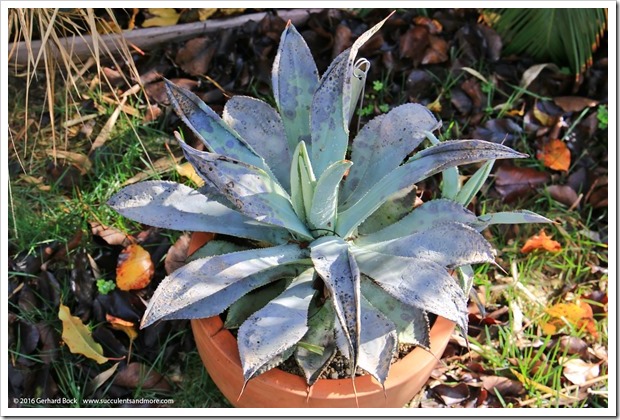 This Agave pygmae ‘Dragon Toes’ took the worst hit. I had temporarily moved it from the front porch to the front lawn so it could get washed off by the rain and then forgot to move it back. I think the front porch would have offered just enough protection. 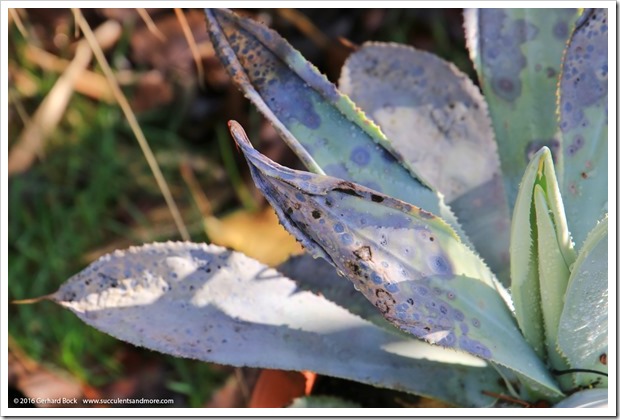 While ‘Dragon Toes’ will live, I’m really bummed by the extensive leaf damage. I may get rid of the mother plant and start over with one of the pups. 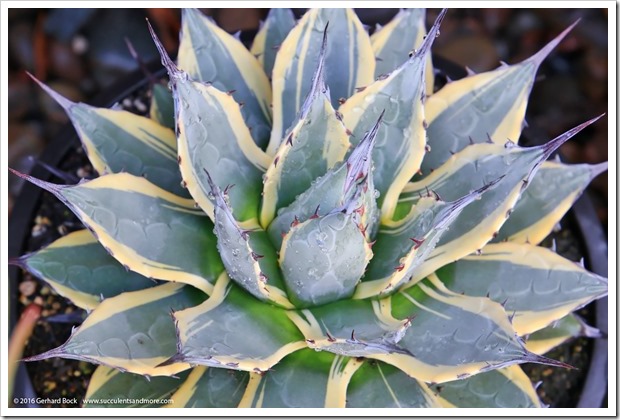 Most of my agaves (like this Agave applanata ‘Cream Spike’) are just fine, thank you—completely unfazed, in fact, by that little bit of frost we had at the end of December 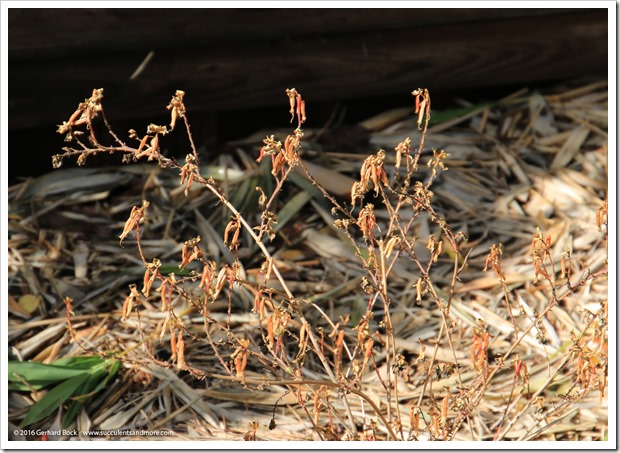 This Cuphea ‘Vermillionaire’ flowered all the way into December until it was felled by the frost on December 27. But I see some green along the base so it should come back. 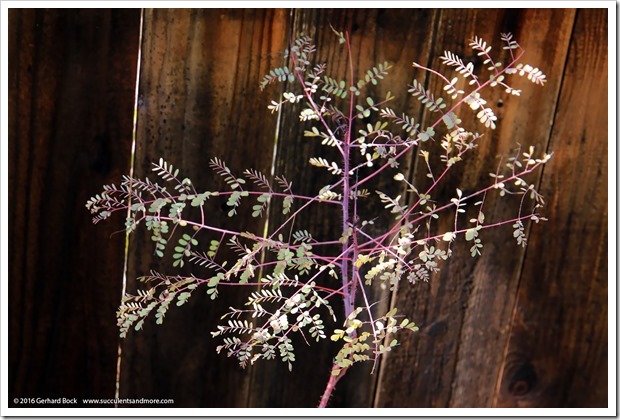 I fully expected this red bird of paradise (Caesalpinia pulcherrima) just behind the Cuphea to lose its leaves (it always does around 30°F) but it’s hanging on to them this year. That’s a good sign. Maybe it’ll even flower this summer. 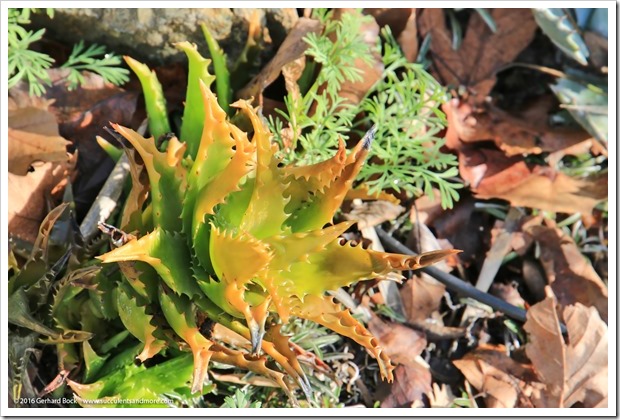 The only aloe with damage is this Aloe dorotheae. It doesn’t look damaged but the leaves are suspiciously soft. Time will tell. I knew it was risky to plant it out in the open outside the front yard fence. It’s not a hardy species. 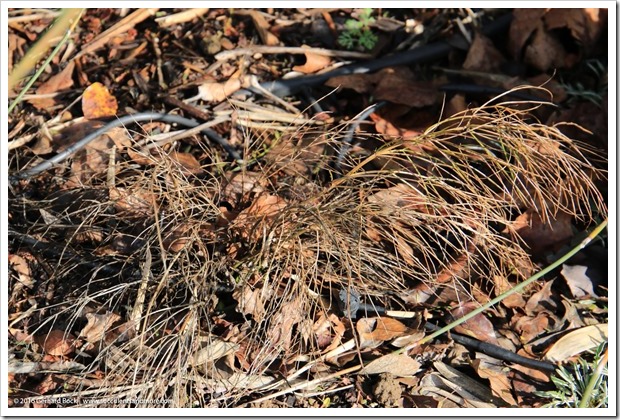 This newly planted Russelia equisetiformis got knocked all the way to the ground. An established plant not far away has no leaf damage. Go figure (my phrase of the day). 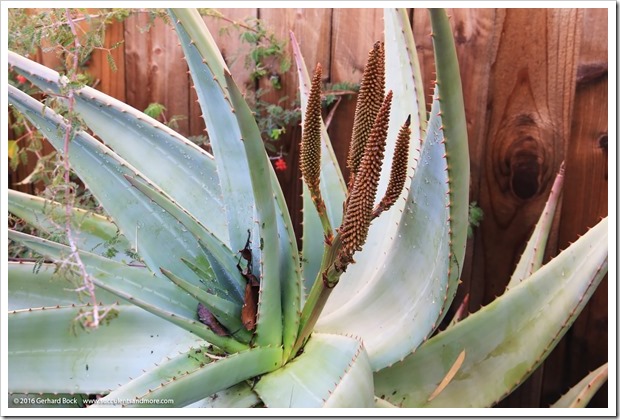 Most succulents are doing very well. The Aloe ferox above is pushing its largest flower stalk ever. 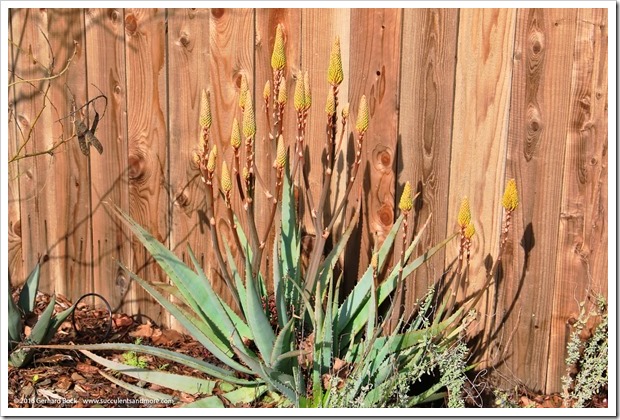 The emerging flowers on my Aloe ‘Moonglow’ are undamaged 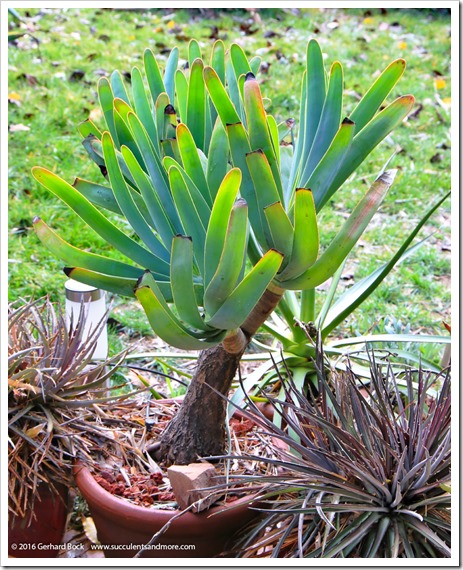 Even this fan aloe (Kumara plicatilis) is fine. The desiccated leaf tips are common in potted specimens in our climate; they’re caused by drought and/or salt build-up in the soil. This plant will go in the ground in the spring so the leaf-tip problem will hopefully go away. 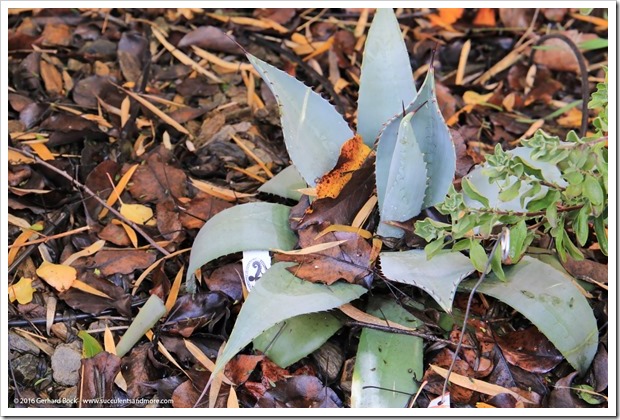 The biggest problem right now is the leaf litter (from a Bradford pear tree in the photo above) that is partially covering many succulents. I’ll work on removing the dead leaves this coming weekend. Mold is beginning to form under them, which could disfigure the succulents and/or cause them to rot.

January weather update: So far every night in January has been above 33°F. The next 10 days look to be frost-free as well. I’m going out on a limb here, but I think we’re out of the woods as far as cold weather is concerned.