After my morning outing to Tohono Chul Park I finally visited a place I’d always wanted to see but had never had time for on earlier trips: Ted DeGrazia’s Gallery in the Sun.

Ettore “Ted” DeGrazia (1909-1982) was an artist at home in many disciplines but he’s best known as an impressionist painter. While his work covered a wide range of subject matter, his paintings of Native American children—reproduced ad nauseam on everything from greeting cards to bric-a-brac—earned him fame and scorn in equal measure. Here is an example: 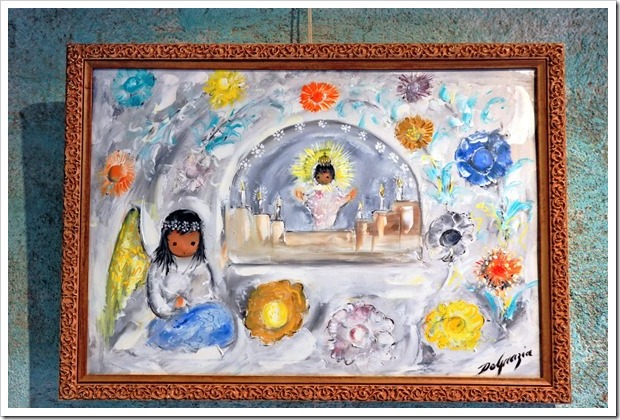 I don’t want to debate the merits of DeGrazia’s work, but I love many of his drawings and paintings (not the children, I will admit that). However, what brought me to this spot in the foothills of the Santa Catalina Mountains was the property itself. As you will see, what DeGrazia built here is simply breathtaking.

Looking at the main gallery, the Gallery in the Sun, from the parking lot

When DeGrazia brought the 10-acre parcel in 1949, it was in the middle of nowhere. There was no water and no electricity. Progress and development were inevitable, however, and over time the surrounding desert was bulldozed to make way for homes, businesses and even a country club.

Today the property sits in the middle of housing subdivisions. 10 acres is a lot of land, though, and it creates a comfortable buffer against neighbors. While I could see other houses, I still felt like I was in a very special spot in the desert. 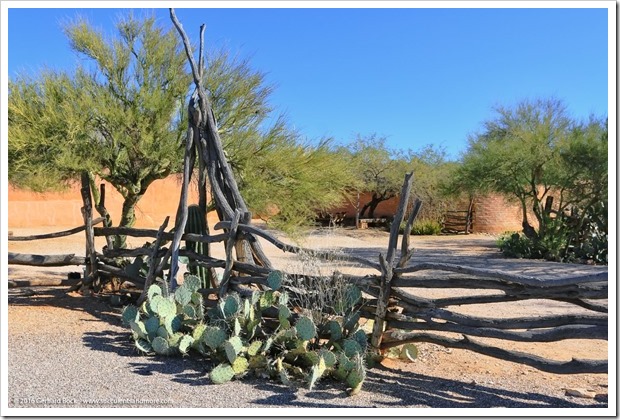 The low-slung building behind the palo verde trees is the Gallery in the Sun. We’ll save it for last and explore some of the other buildings first. 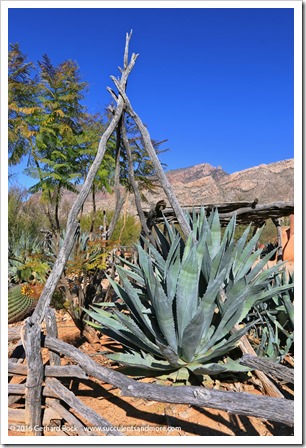 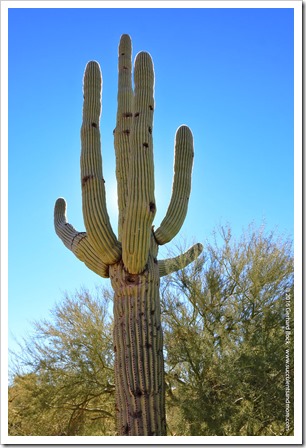 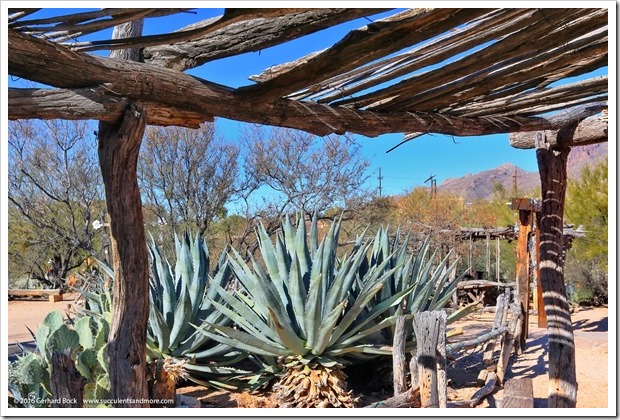 Two agave species dominate the landscaping: Agave americana and Agave lophantha. Both offset like crazy and hence are well suited for mass plantings.

The first building I visited was the Mission in the Sun. DeGrazia hand-built this simple adobe chapel in 1952 with the help of friends. It is in memory of Padre Eusebio Kino, the Jesuit priest who founded many missions in Mexico and Arizona (including San Xavier del Bac south of Tucson), and is dedicated to Our Lady of Guadalupe, the patron saint of Mexico. 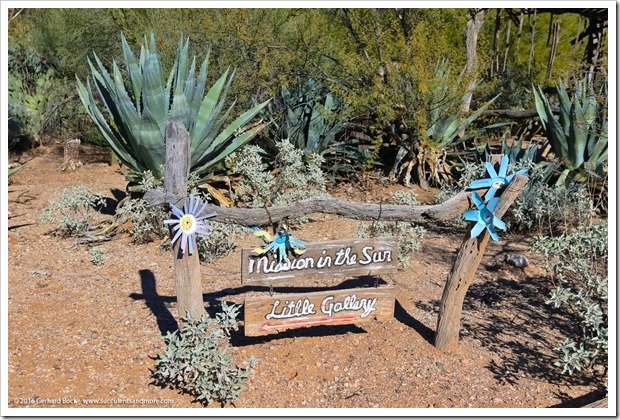 I love what DeGrazia said about his little mission:

“I built the mission for myself. I’m not a churchgoing man but I am a religious man and perhaps religious only within me. Religion to me is right or wrong. You do right and you’re a religious man. It’s not Catholic it’s just an old chapel for anybody who wants to go in there whether Christian or non-Christian.” 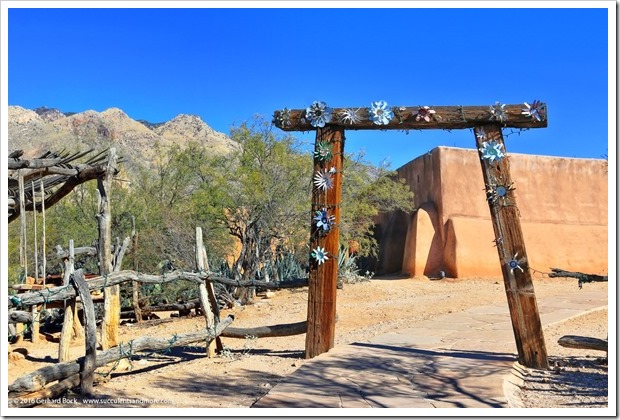 The flowers you see in the photo above are found everywhere on the grounds. They’re made from recycled cans.

The chapel couldn’t be more perfectly suited for its surroundings. 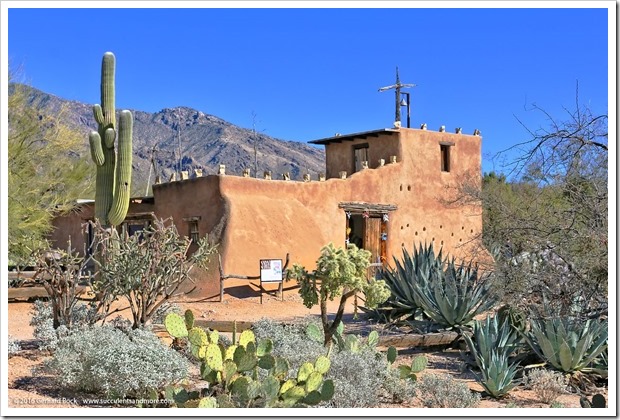 The cactus and agave plantings are the icing on the cake. 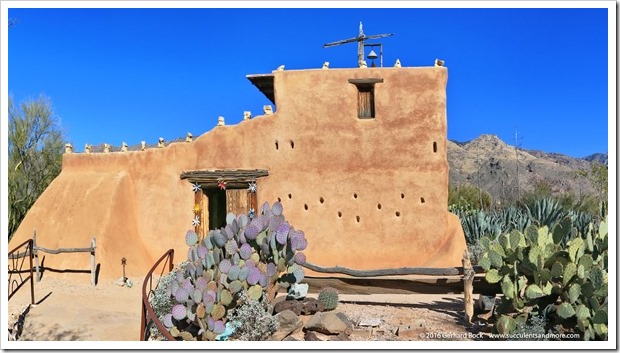 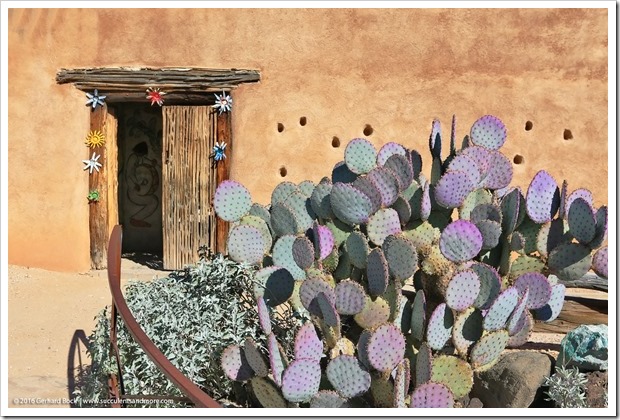 Before I went inside the chapel, I took a few more photos of the area around it. 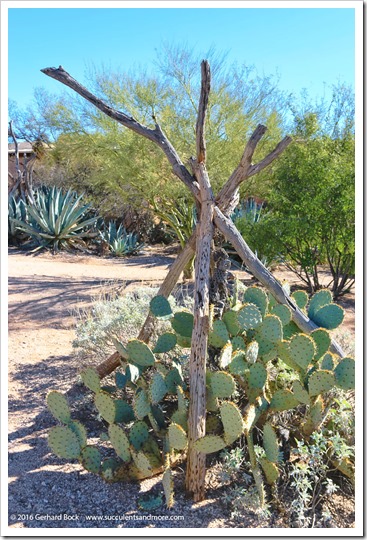 A cactus tent? I don’t know what the significance is of these tipi-like structures. 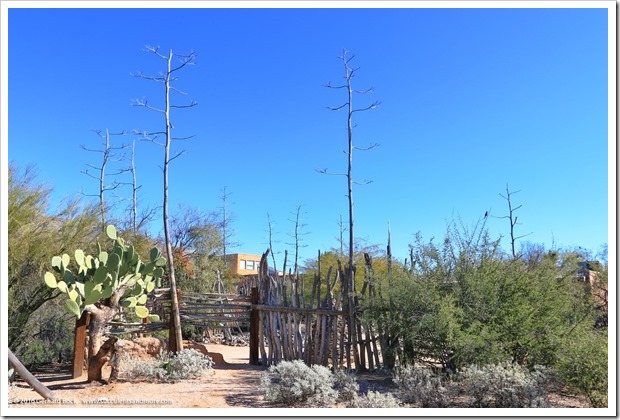 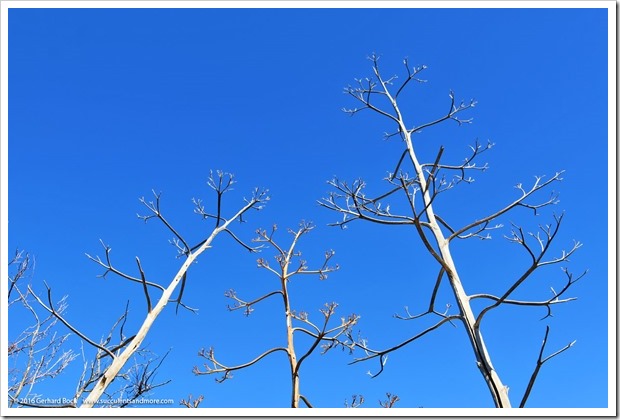 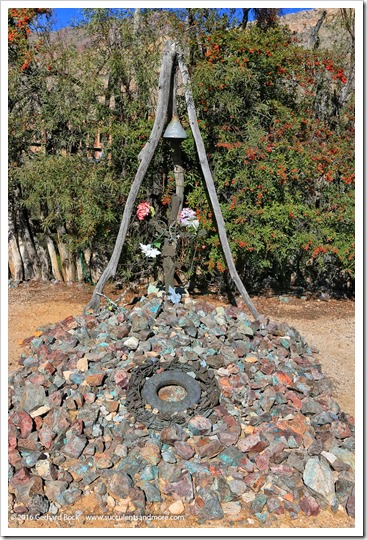 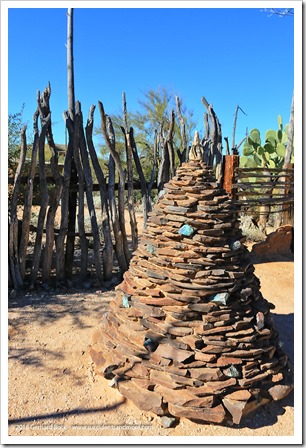 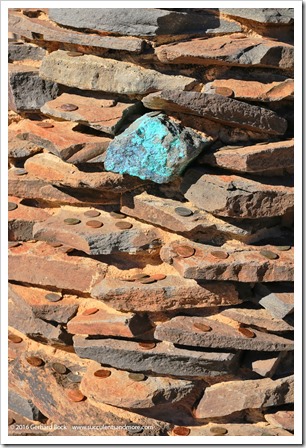 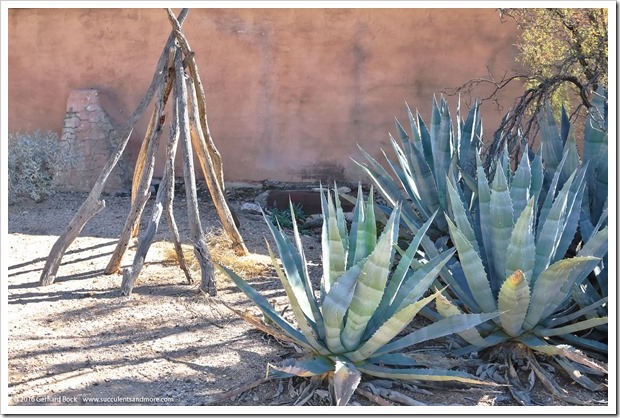 More branches lashed together like a tipi (and Agave americana) Mission in the Sun 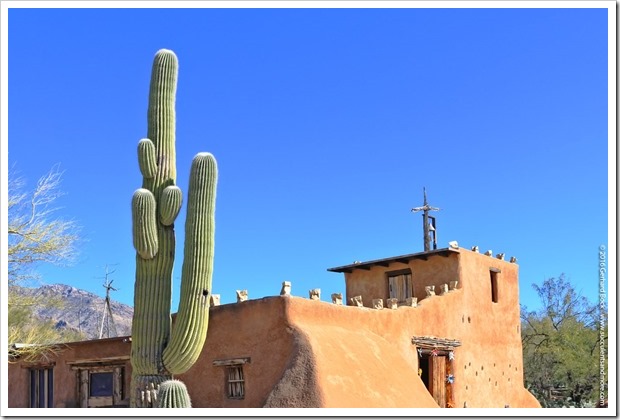 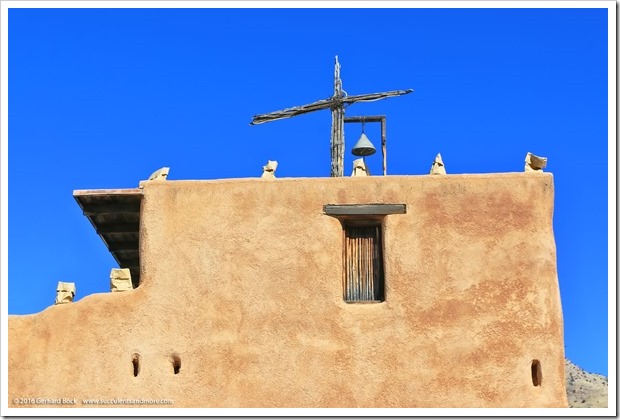 The cross on top is made from a saguaro skeleton 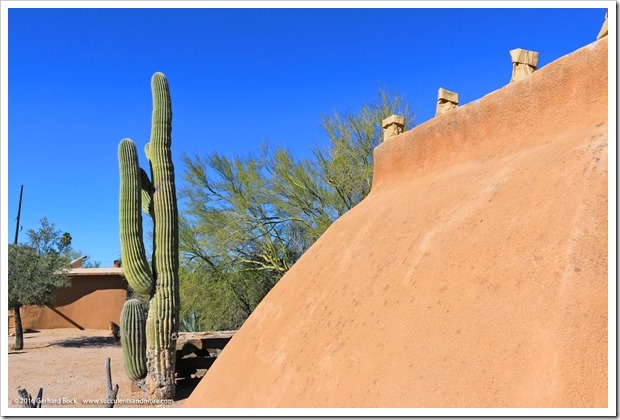 Luminaria bags on top of the chapel 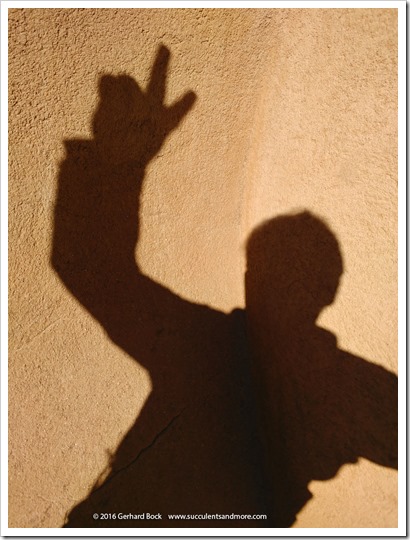 Where did this creepy figure come from? 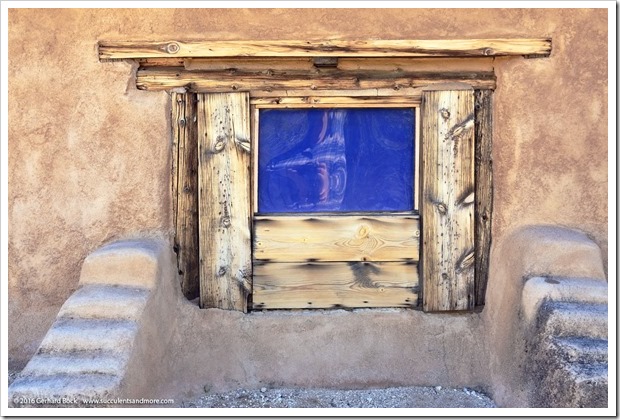 I knew the inside of the chapel was very special and I wanted to experience it by myself, with no one else around. I had to wait for a while… 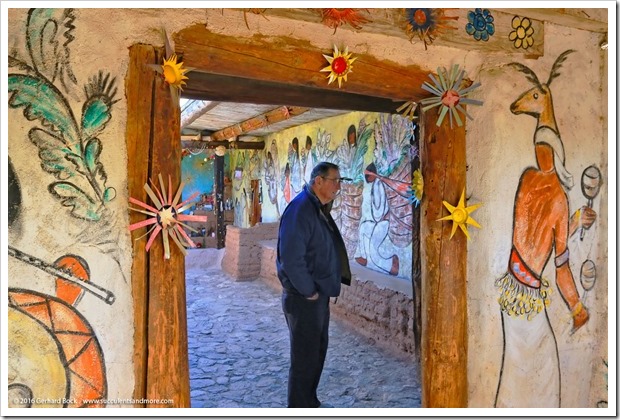 …but for a few minutes I was alone. 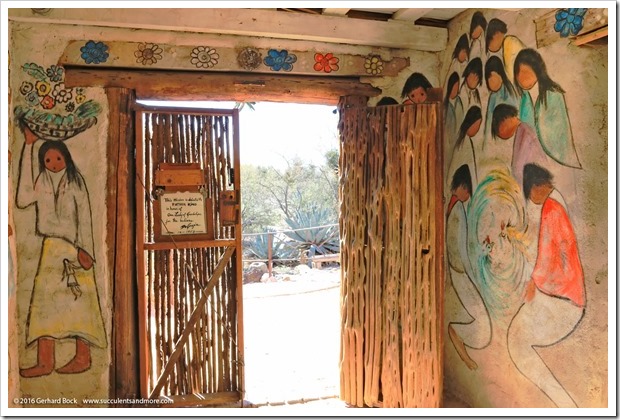 I can’t quite express how much the seemingly simple beauty of this chapel affected me. The colors, the textures, the architectural details work together perfectly to create something profound. 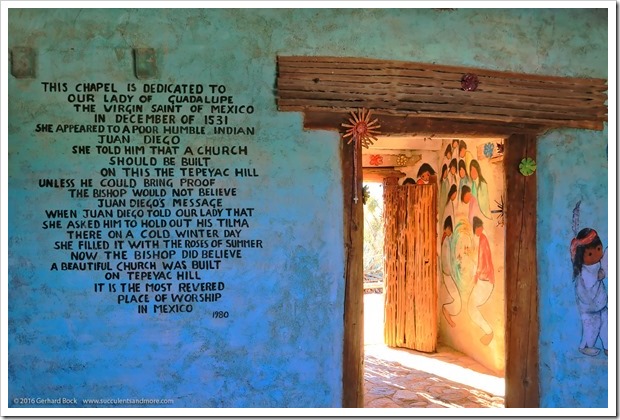 The floor is rough-hewn rock, and the roof is open in the middle. A few spartan benches offer seating. 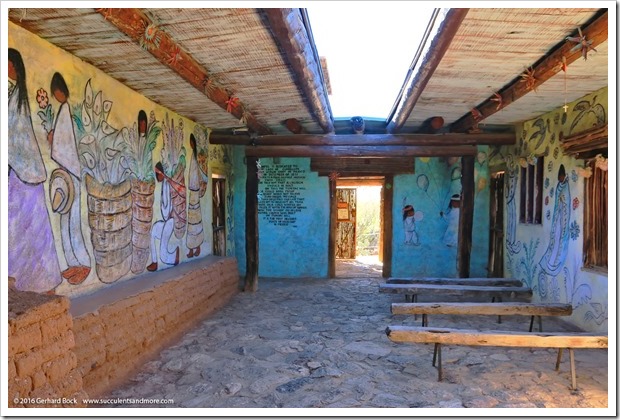 I’m clearly not the only one affected by the spirit of this place. The altar has become a shrine, decorated with crosses, photos of loved ones, candles and other small objects that have meaning to those who left them behind. 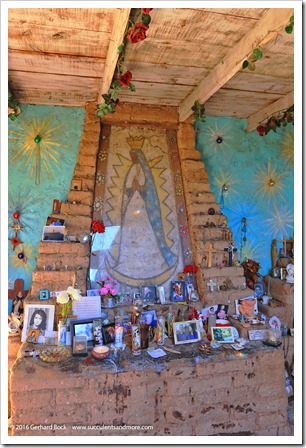 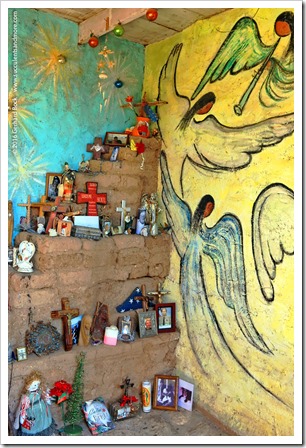 I’m not a religious person, but I felt how special this small adobe structure is. Maybe because it has soaked up the prayers, hopes and desires that untold scores of visitors have left behind over the decades. 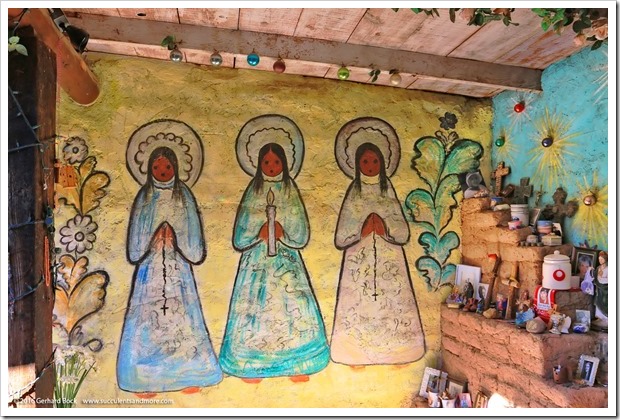 In part 2 I’ll show you the small house where DeGrazia and his wife lived as well as the main building, the Gallery in the Sun, and its succulent-filled courtyard. There is a lot more to see!