On my way to Phoenix last Monday I decided to take a scenic detour off Interstate 10: US 60. I hopped on 60 at its western terminus east of Quartzite and stayed on it all the way to Phoenix.

I think I-10 is plenty scenic but I hate the fact that you can’t just pull over whenever you feel like it—the highway patrol frowns on that kind of behavior. Fortunately, this isn’t a problem on a virtually deserted two-lane highway like US 60. The downside, of course, is that you end up spending way more time on taking photos than you would otherwise. But since I was on vacation and didn’t have a strict schedule to follow, it really didn’t matter.

Needless to say I took the requisite road shots: 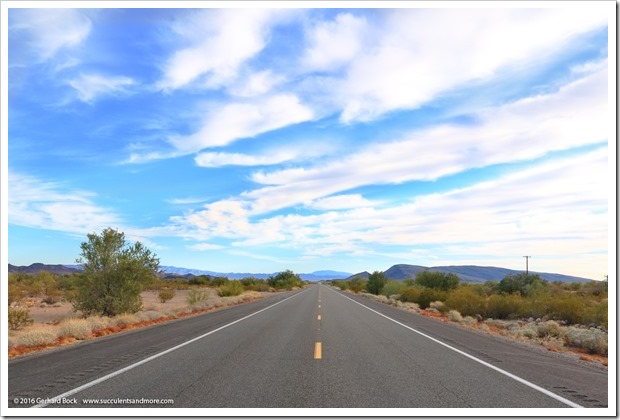 But what I love best about these lonely desert roads are the small towns you drive you, usually preceded by a cluster of abandoned buildings. 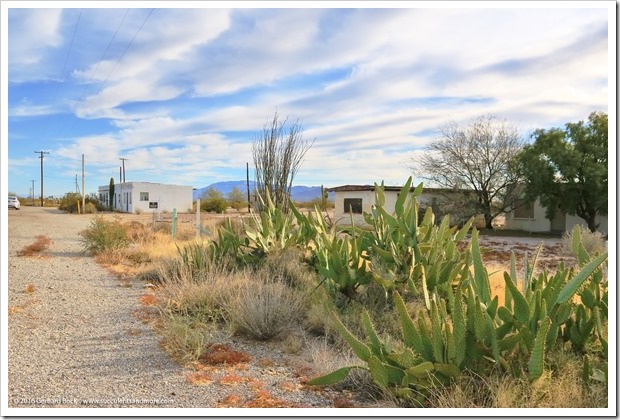 The town of Salome (pronounced “suh-LOAM”) is a good example. 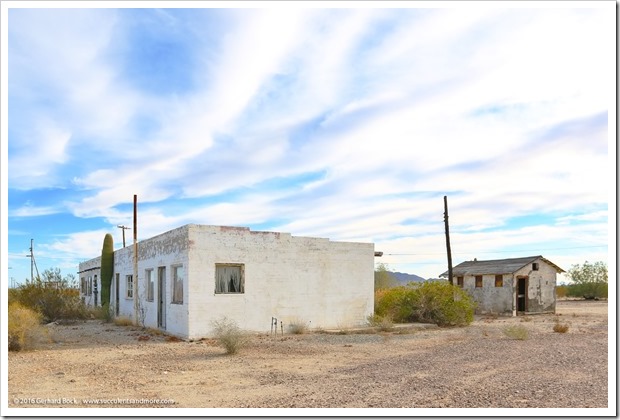 Look how close this saguaro is to the house. I wonder what will happen to it as the structure continues to deteriorate. 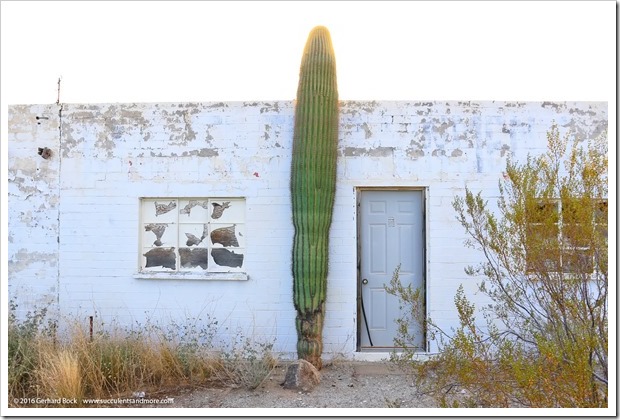 A lonely ocotillo silhouetted against the winter sky added to the aura of melancholy. In the old days, when US 60 was the only major road, there was a steady flow of travelers, and these small towns were vibrant and full of life. Now travelers zip along at 70+ miles per hour on the nearby interstate and don’t stop here any more. 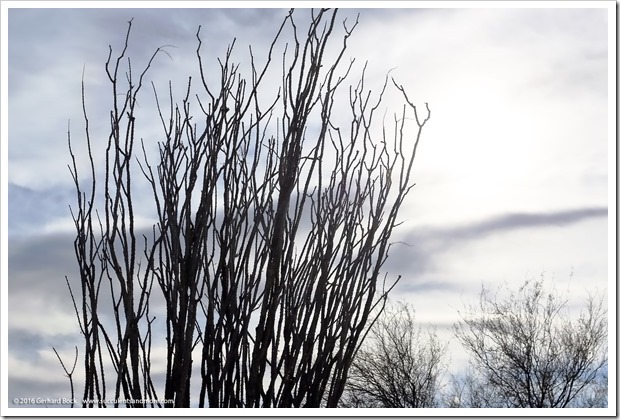 This sign made me quite curious about the town. “Where she danced?” Where who danced? And why? 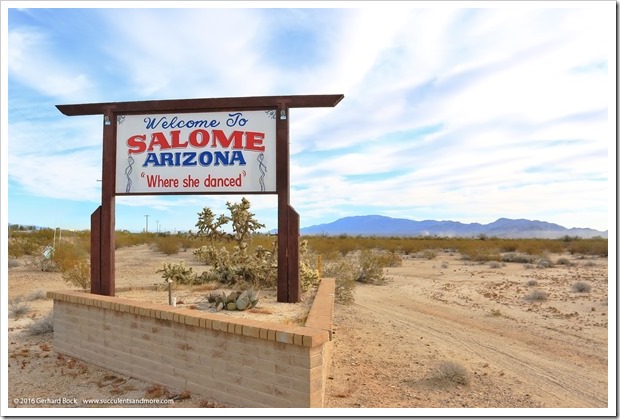 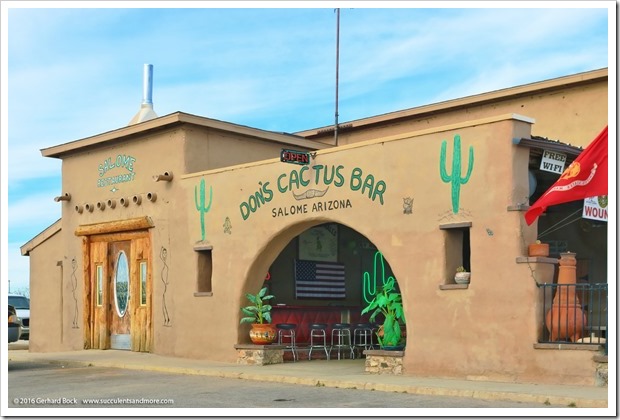 But this historical marker did: 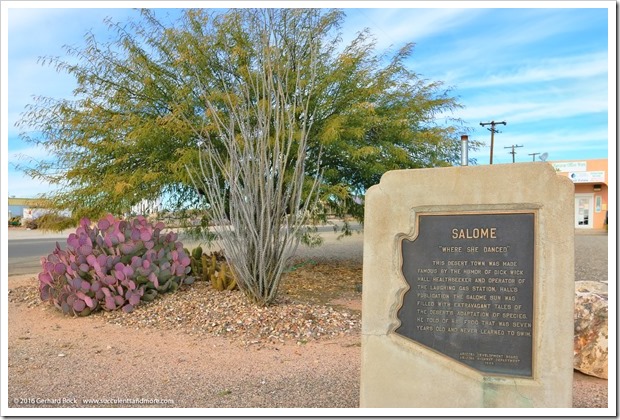 Or did it? It sure was one of the most quixotic markers I’d ever seen. It reads:

This desert town was made famous by the humor of Dick Wick Hall, healthseeker and operator of the Laughing Gas Station. Hall’s publication The Salome Sun was filled with extravagant tales of the desert’s adaptation of species. He told of his frog that was seven years old and never learned to swim.

I was more confused than before about this town’s claim to fame. Fortunately, Wikipedia sheds some light on the mystery. Dick Wick (what a name!) Hall co-founded the town in 1905 together with a man by the name of Charles Pratt whose wife, Grace Salome, apparently removed her shoes and began hopping on the hot sand when she first arrived (hence “Where she danced”).

In 1920, when Salome was finally connected to the outside world by road, Hall opened his Laughing Gas Service Station and began distributing a mimeographed newsletter called The Salome Sun to his gas station customers. It was filled with tall tales about life in the desert—for example about a 7-year-old, 18-pound bullfrog that carried around a canteen and couldn’t swim for a lack of swimming holes. The Salome Sun somehow came to the attention of The Saturday Evening Post, in its heyday the most widely circulated weekly magazine in America. Hall became a regular contributor from 1920 until his death in 1926. (Tragically, he died at the young age 49 from an infection following a tooth extraction.)

Before he died, Hall bought plans for a golf course from a visitor passing through town. Because of the hot climate, the plans were sweat-stained and Hall got the measurements wrong, misreading “rds” (rods) instead of “yds” (yards). That’s quite a difference—a rod equals 5½ yards. Hence the golf course ended up being 40 miles (!) long, the largest in the country.

In the old days many small towns along the highways and byways of America counted colorful characters like Dick Wick Hall among their residents. I wonder where the Dick Wicks of today are? 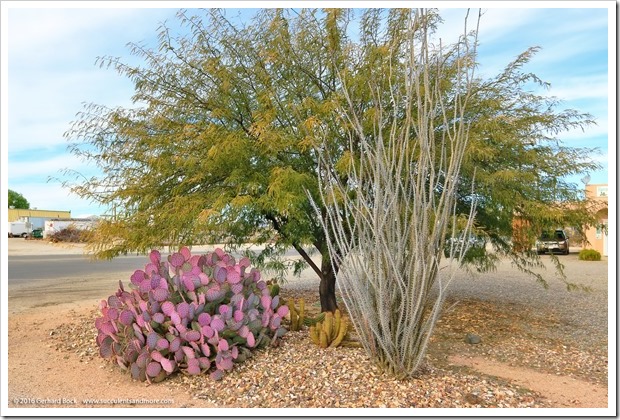 This clump of Santa Rita prickly pear (for the sake of convenience I will call it Opuntia santa-rita although there is much debate about its correct name) was the most colorful I encountered on my entire trip. Plus, it was not infested with cochineal scale like so many opuntias, both in the wild and in cultivation.

My next stop was Wenden, about 5 miles east of Salome on US 60. This is what made me pull over: 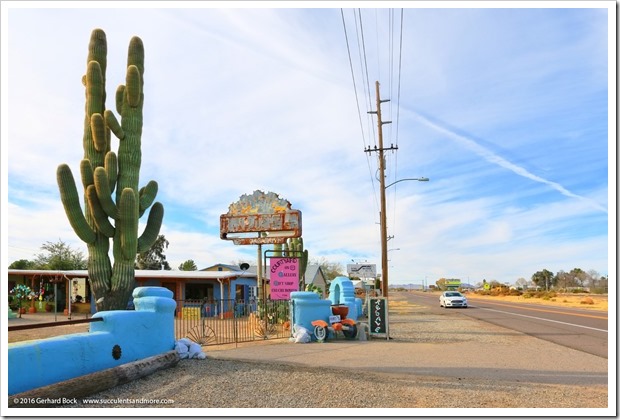 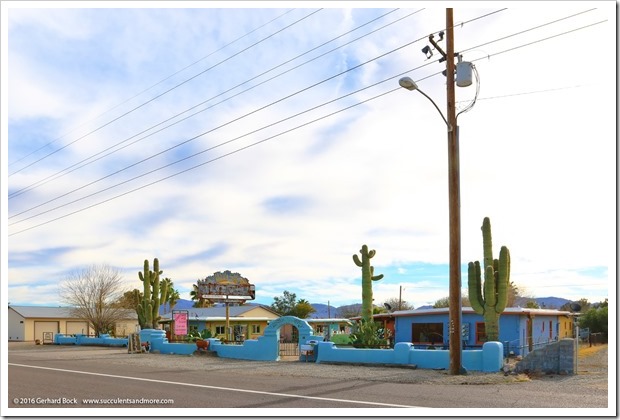 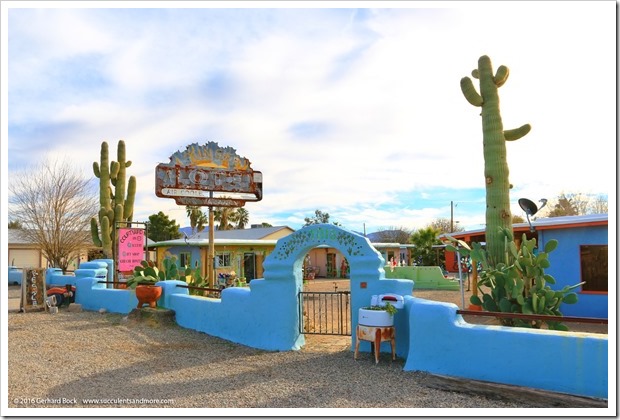 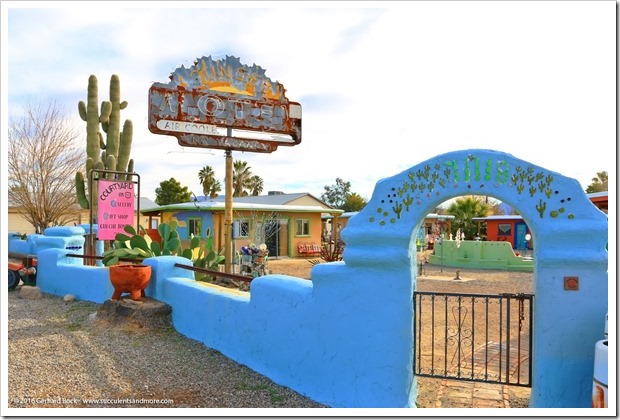 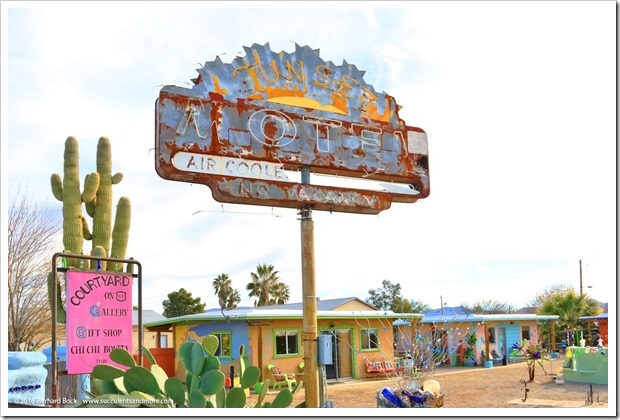 Isn’t it great? An old motel converted to a funky art gallery. It was closed and I wasn’t able to find out anything about its history but it does have a Facebook page with more photos. 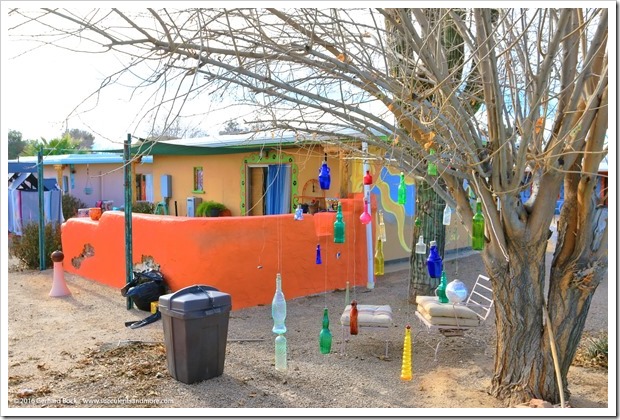 Somebody appears to be living in this motel unit

One of the reasons why I decided to take the US 60 detour was to see the Saguaro Motel in Aguila. I had seen photos of its old sign on Flickr and wanted to photograph it myself. Little did I know that the property is surrounded by a 6-ft. chain link fence topped by 2 ft. of barbed wire. Hardly a friendly setup. The owners clearly don’t want to be bothered by strangers. All I could do was carefully stick my camera through the strands of barbed wire. I did get a nice photo, but I wish I could have explored the place from all angles. 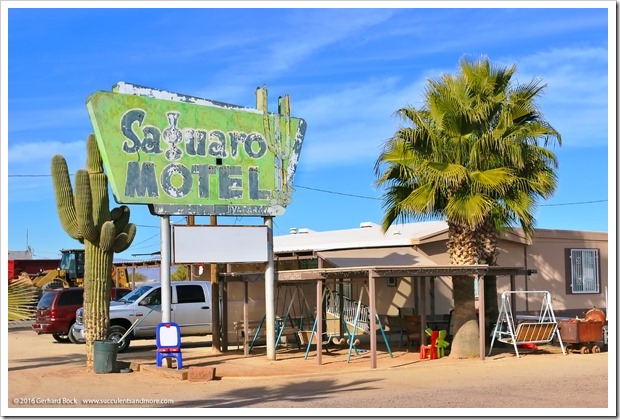 After another 25 miles I got to Wickenburg. It’s by far the largest town in this area—the only real town, you could say. I pulled over briefly to take a picture of the old Saguaro Theater (cactus-themed placed always catch my eye for some reason). Apparently it only plays one movie at a time. The Good Dinosaur seemed like an odd choice at a time when everybody wants to see nothing but Star Wars: The Force Awakens. But maybe it was too expensive for a small theater to rent. 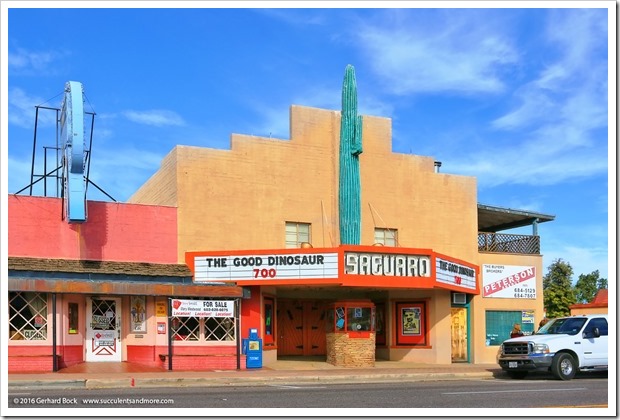 Not long after Wickenburg the desert started to give way to light industrial and suburban developments and the wistful charm of US 60 disappeared in my rearview mirror. 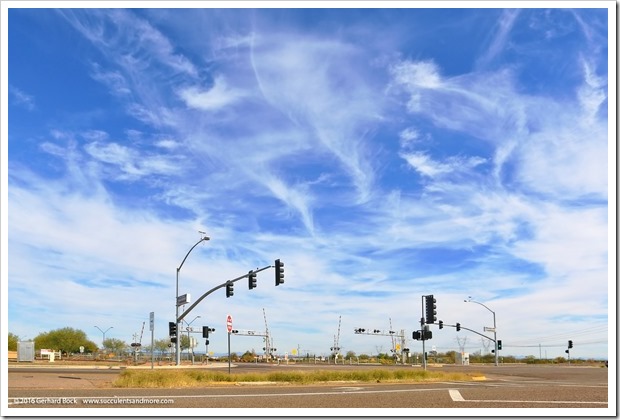 But the strange bout of sadness I felt didn’t last long because I soon arrived at my first Phoenix destination, and one of my favorite botanical gardens in the world: 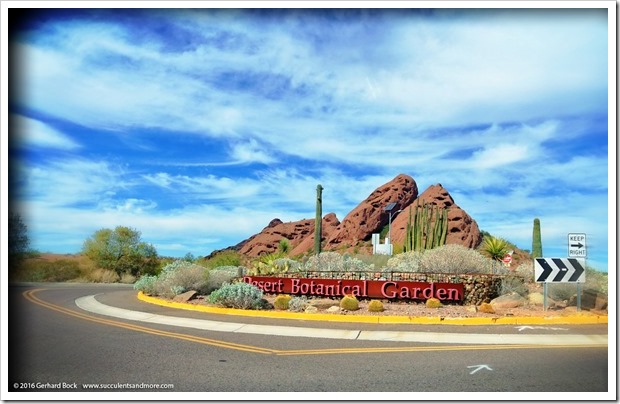 Look for a treasure trove of photos from the Desert Botanical Garden in a future post or two.