For some reason, I always seem to miss the monthly Garden Blogger’s Bloom Day. On the 15th of every month, garden bloggers from around the world post photos of what’s in flower in their garden at that particular point in time. Call me two weeks early or two weeks late, but here’s what’s blooming in my garden on August 29, 2014.

Late August/early September marks a subtle transition. Summer-flowering plants are slowly declining, while fall-flowering ones are gearing up for their time in the limelight. In a month’s time, things will look very different around here. Hopefully I will remember to post another update then.

I never know how to organize this kind of post. First I thought I’d present these photos in random order, but then I decided to sort them by color. For once, organization wins over chaos—not that I don’t like a healthy dose of the latter. 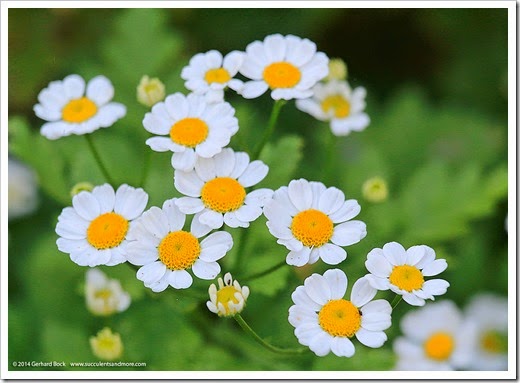 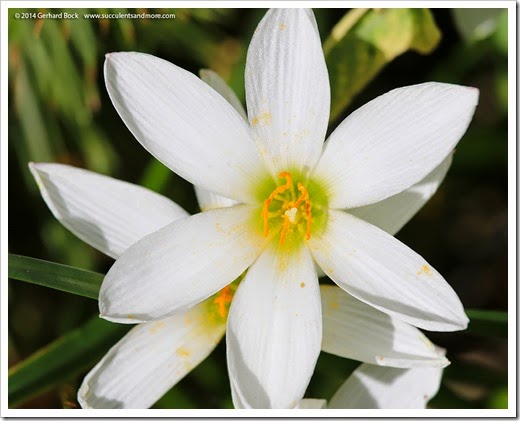 Argentinian rain lily (Zephyranthes candida). I planted about 25 bulbs five years ago, and they have doubled in number, spreading along the front of the border on the inside of the front yard fence. The individual flowers don’t last long, but it seems there’s always at least a dozen plants in bloom at any given time. 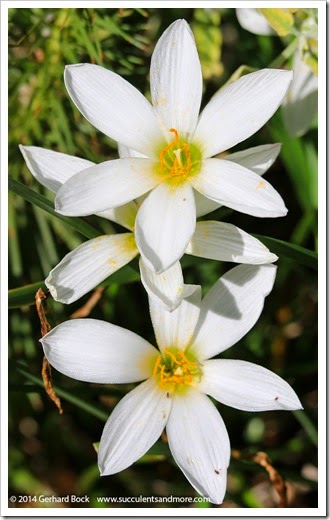 Many sources say that rain lilies need constantly moist soil but in my experience that’s simply not true. Mine get watered once a week, together with everything else in the perennial border. 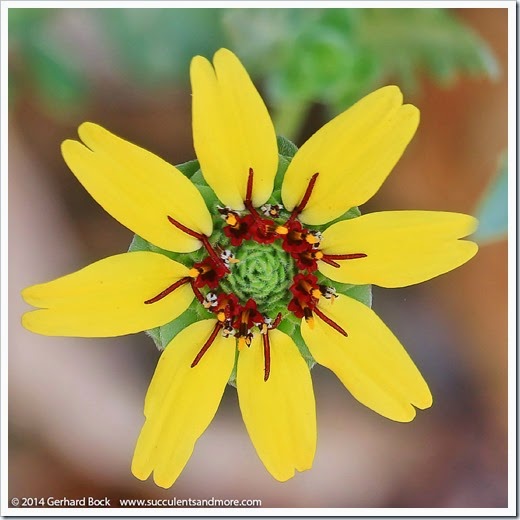 Chocolate flower (Berlandiera lyrata). This daisy the size of a quarter smells just like chocolate. I planted two just a few months ago, and they’ve been blooming non-stop. Even after the petals fall off, the “flower” still looks interesting. 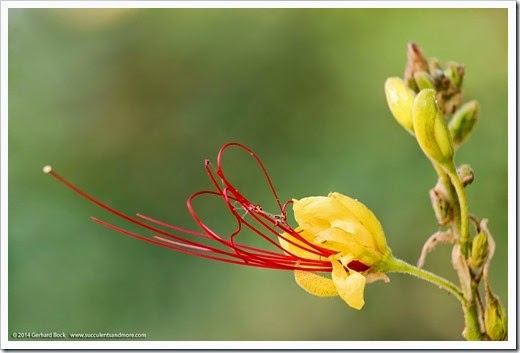 Yellow bird of paradise (Caesalpinia gilliesii). I have two specimens, and both have been thriving in the heat, blooming constantly all summer. 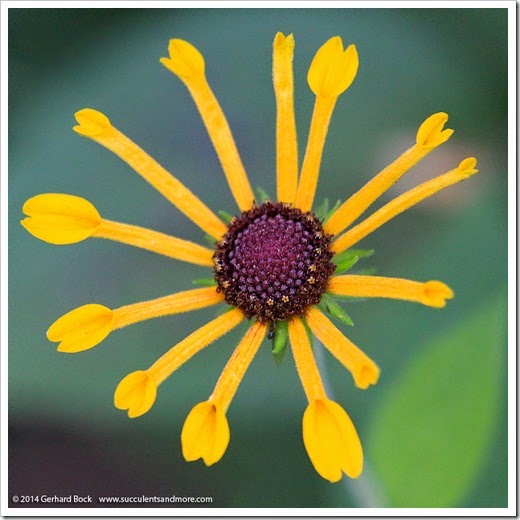 Rudbeckia subtomentosa ‘Henry Eilers’. I love the unique look of this black-eyed susan—so much so that I took a few more photos for you. 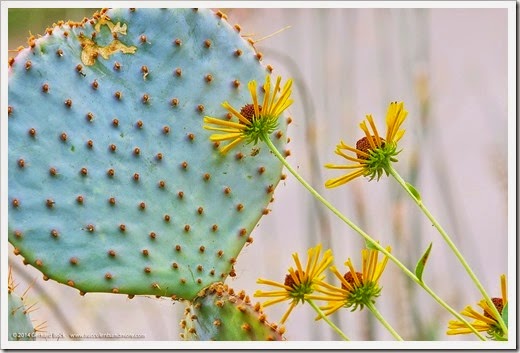 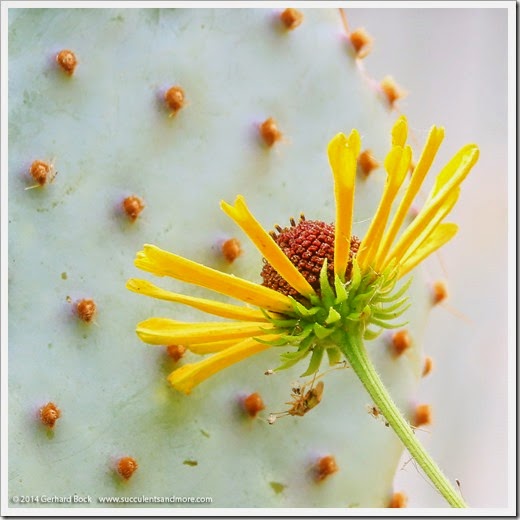 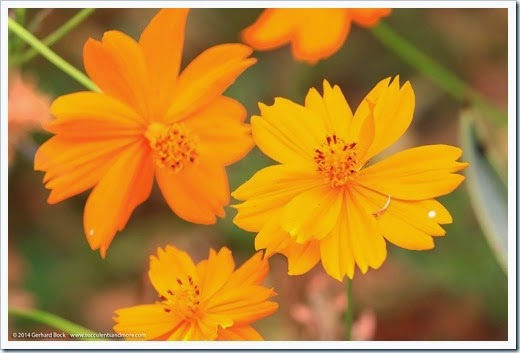 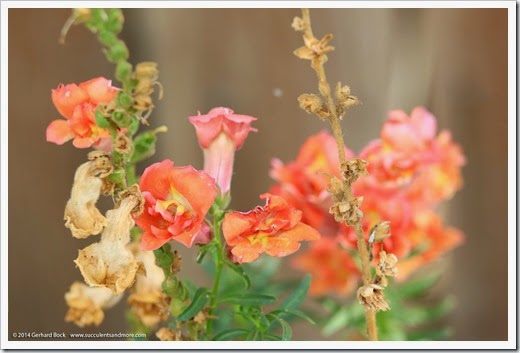 Still on the fence about this one: Penstemon barbatus ‘Schooley’s Coral’. It’s been a steady bloomer since spring, but I’m not in love with the frilly snapdragon-like flowers. 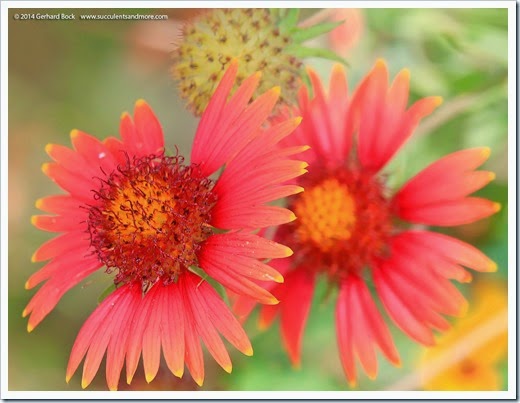 Unidentified blanket flower (Gaillardia sp.) that was part of the “Dry Land” seed mix I sowed in part of the new desert garden bed 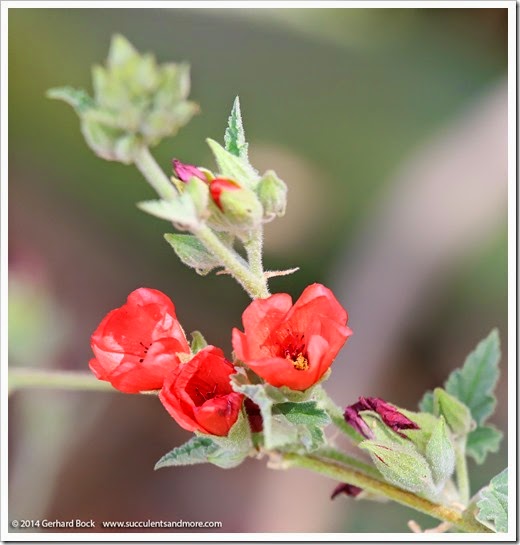 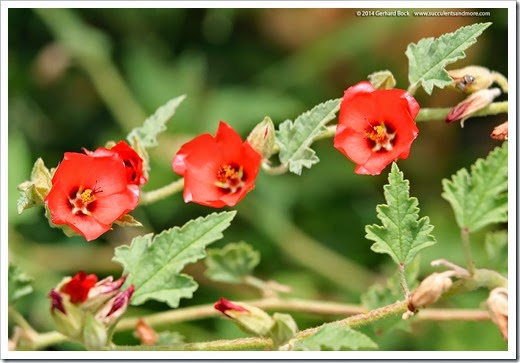 …blooming non-stop since the spring 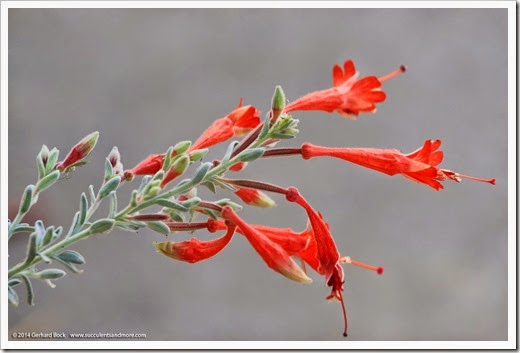 Epilobium canum ‘Calistoga’, one of several California fuchsia cultivars. All of them are coming into their own, now that fall is approaching. 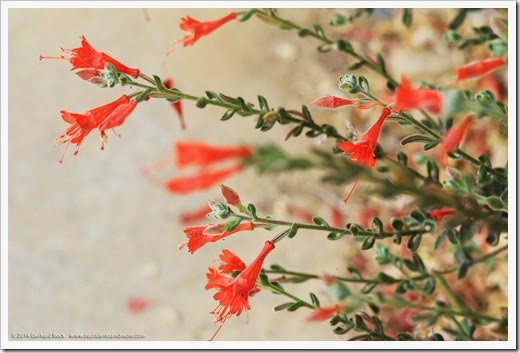 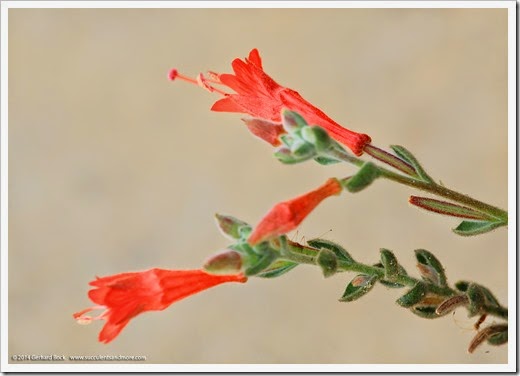 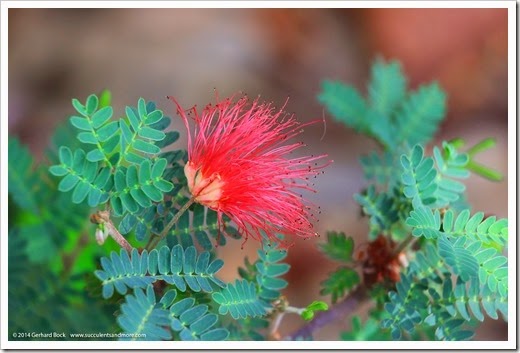 Baja fairy duster (Calliandra californica), coming back into flower after taking a break in the heat of the summer 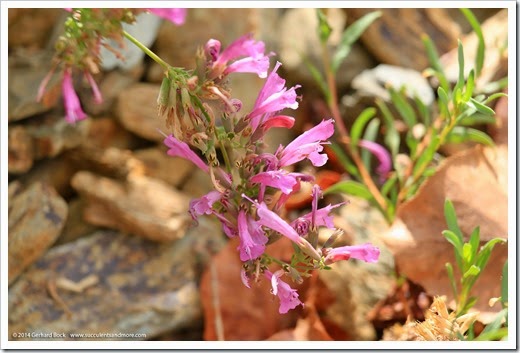 Agastache mexicana ‘Acapulco Rose’. This species has done much better in the new desert garden bed than Agastache aurantiaca and Agastache rupestris. The other two species don’t seem to be anywhere near as heat-tolerant. 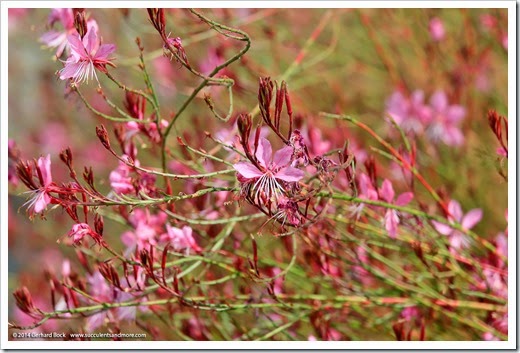 Gaura lindheimerii, slowing down now after a non-stop flower display that has lasted for months 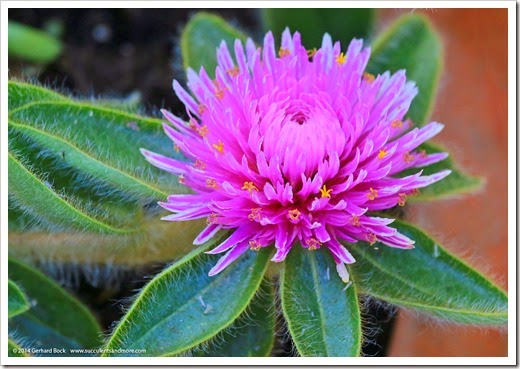 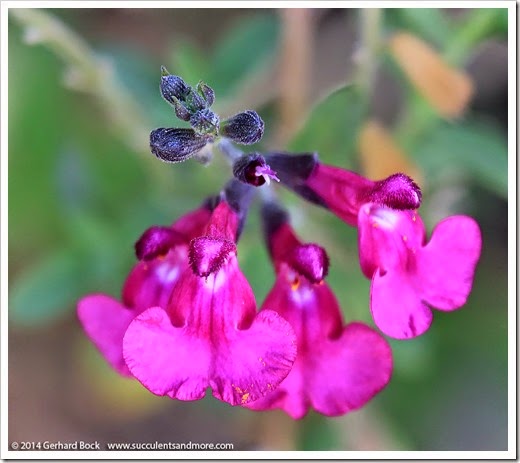 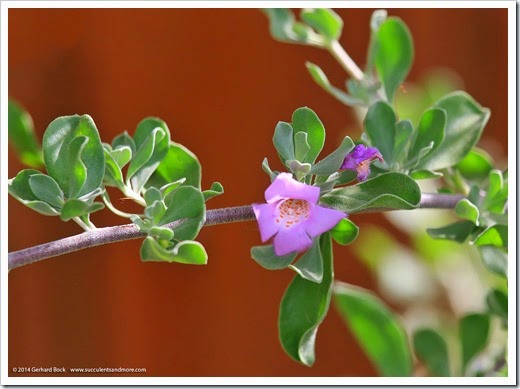 Leucophyllum frutescens ‘Compacta’. Both of our compact Texas rangers are in bloom, although I swear that every time I want to photograph them, there are fewer flowers than the day before. I love the fuzzy gray-green foliage and the soft purplish-pink flowers. 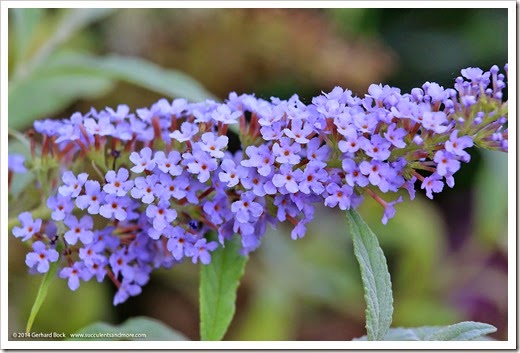 Buddleia davidii ‘Buzz’. This is a true dwarf butterfly bush, no more than 3x3 ft. 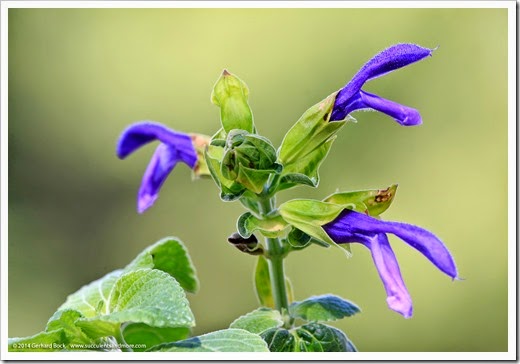 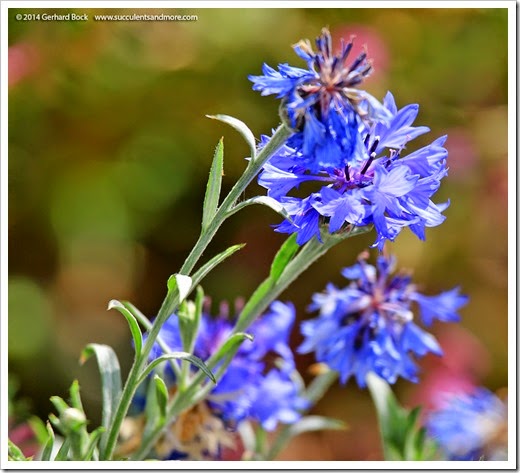 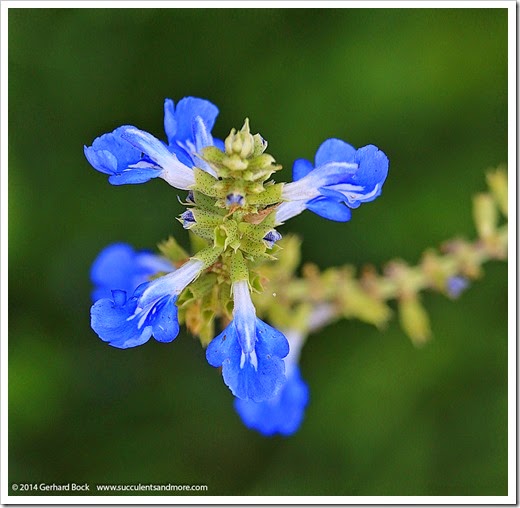 Bog sage (Salvia uliginosa), one of the my favorite sages, still pumping out flower and flower 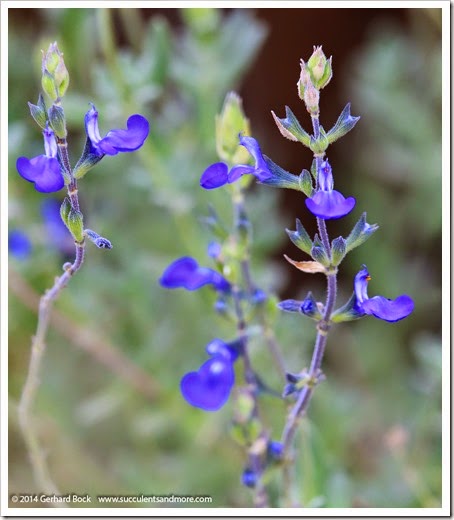 Another favorite, electric blue sage (Salvia chamaedryoides). This species is short-lived but I keep replacing it because I love the gray leaves and indigo flowers. The plant in the photo above is outside the front yard fence, but the one that’s done the best and has lived the longest is in the backyard in spot where it never gets watered. It survives on rainfall alone—and we lived in a Mediterranean climate with virtually no summer rain.

To wrap up this post, I want to show you three plants getting ready to flower: 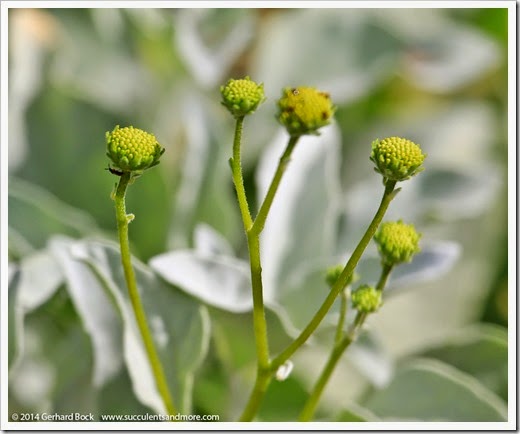 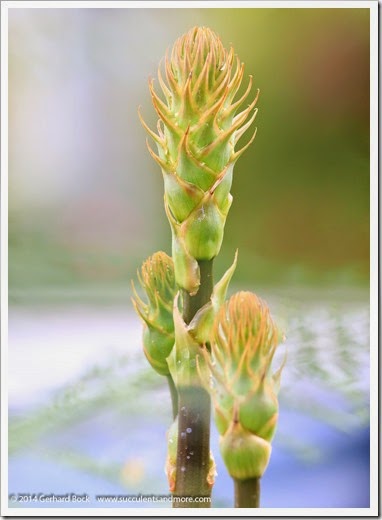 Aloe cryptopoda pushing up a tall flower spike (almost 5 ft. tall now). This species is supposed to be a winter bloomer. I have no idea whether it’s early or late… 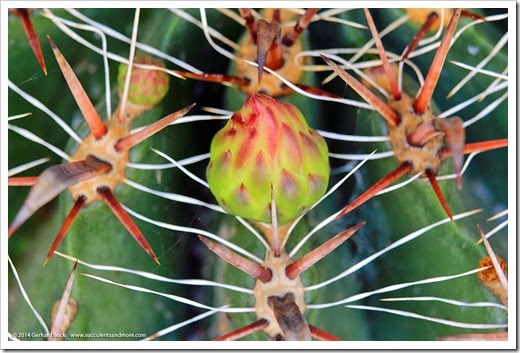 Fishhook barrel cactus (Ferocactus wislizeni) getting ready to bloom for the first time. It had five flowers last year but they stopped growing after they’d reached a certain size and never opened. This year there are three flowers that look like they will open. I bought this cactus at Mariscal Cactus & Succulents in Desert Hot Springs during our February 2011 trip to the Southern California Desert.