Here’s a tongue twister for you: Puʻuhonua o Hōnaunau. Hawaiian is a seemingly difficult language to pronounce, but it really isn’t. The key is to break words into individual syllables. So Puʻuhonua o Hōnaunau is pronounced “poo-oo-HO-new-ah o HAW-now-now.” Easy, isn’t it? Not!

Hōnaunau is a small town south of Kailua-Kona, the main city on the western side of the island of Hawaii. A puʻuhonua was a place of refuge to which people who broke one of the ancient laws could flee to evade death. Puʻuhonua o Hōnaunau, then, means place of refuge of Hōnaunau.

Keone'ele Cove, the traditional landing place for royal canoes and off-limits to commoners

Puʻuhonua o Hōnaunau National Historical Park preserves one of Hawaii’s most sacred historic places. This site was once home to the chiefs of Kona, one of the six independent chiefdoms of ancient Hawaii all of whom answered to their supreme ruler, or king. Built in the 1500s, a massive wall over 1,000 ft. long, 17 ft. thick and up to 12 ft. tall, separates what once were the royal grounds from the place of refuge, which was both a religious center and a sanctuary for lawbreakers and non-combatants in time of war. 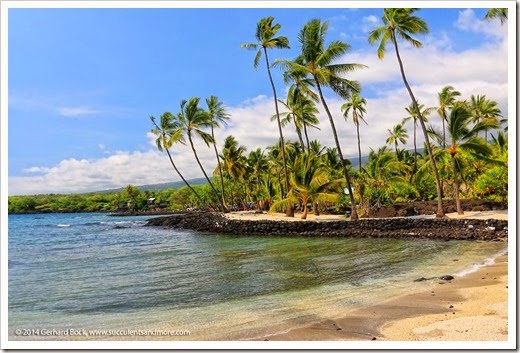 Ancient Hawaiian society was a strict caste system with complex laws. Called kapu, these rules governed every facet of everyday life. For example, commoners were not allowed to look at the chief, their shadow was not allowed to fall on the palace grounds, women were not allowed to eat together with men, etc. Kapu also regulated when timber could be cut, when certain fish could be caught, and so forth.

The punishment for breaking one of the kapu was usually death, typically by clubbing, stoning, strangulation, burning or drowning. (I wonder if the offender was given a choice?) Enforcement was swift because it was feared that the gods would not take kindly to kapu offenses and send earthquakes, lava flows and other natural disasters in retaliation.

Lawbreakers had only one way to cheat death: escape their pursuers and make it to the pu’uhonua. Once there, a priest would perform a ceremony to forgive the kapu breaker, who could then return to his community and resume a normal life. 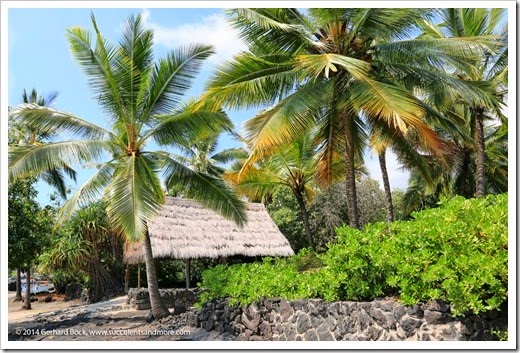 Puʻuhonua o Hōnaunau is a stunningly beautiful site. The grounds are studded with coconut trees growing out of the white sand, and replicas of buildings such as temples and dwellings provide a sense of time and place. 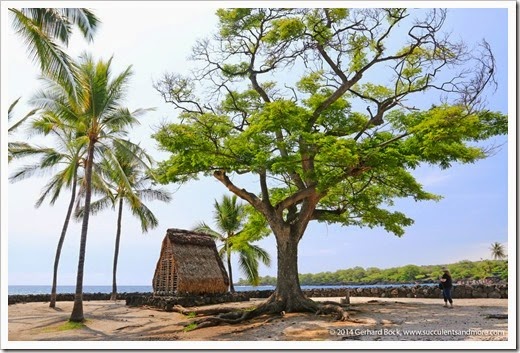 Half-size reconstruction of a temple

A self-guided tour takes you to the major sights in the park. The map we’d been given contained just enough information to know what was, but just being there was a fantastic experience. Take a look at these photos and you’ll see why. 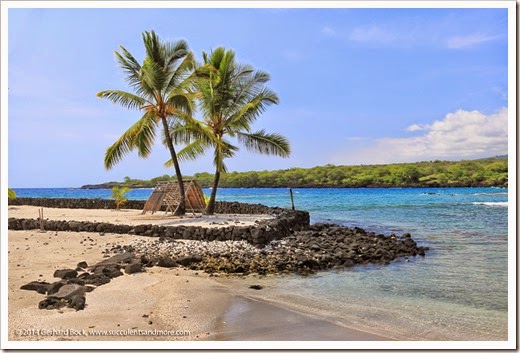 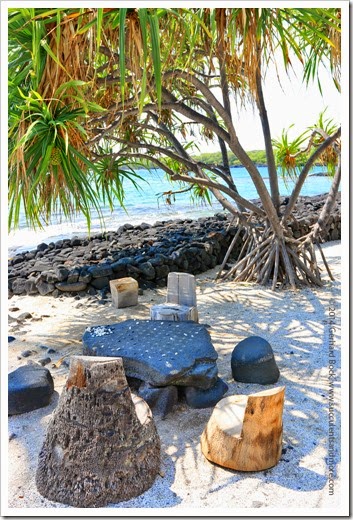 Kōnane board and chairs for the players. Kōnane is a two-player board game resembling checkers. 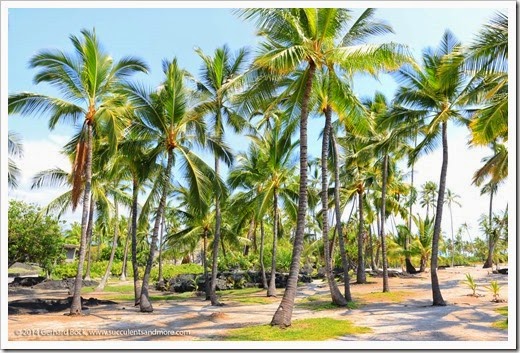 So many coconut palms! I’d be happy to just have one or two in my own garden. 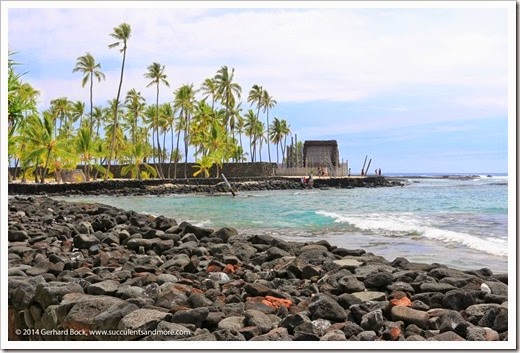 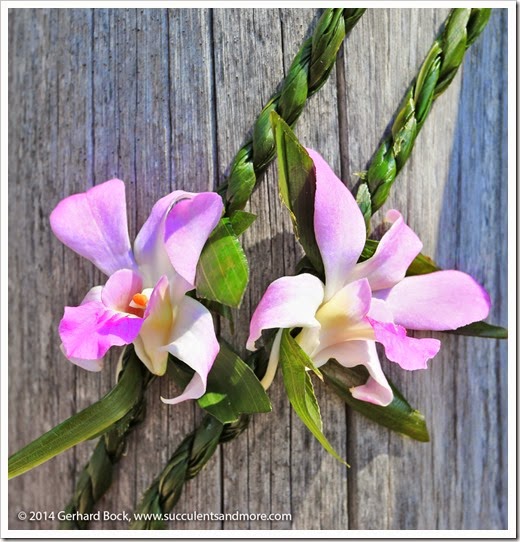 Lei hanging on a post outside the Hale o Keawe 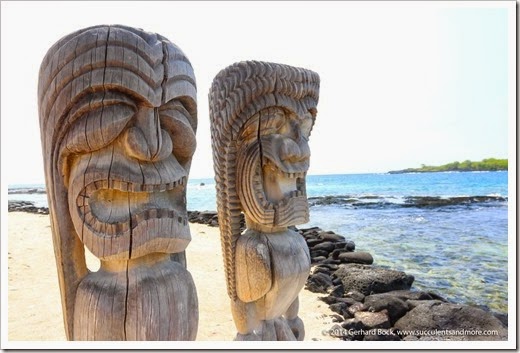 Carved wooden ki'ii statues looking out to sea. The ki'ii (literally “images”)represent the gods worshipped by the ancient Hawaiians. 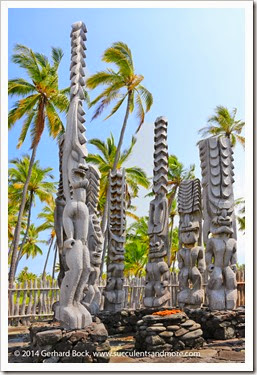 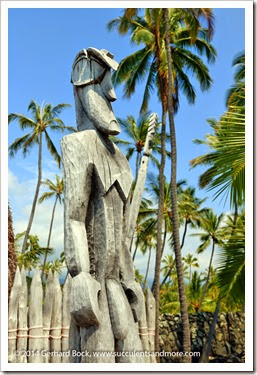 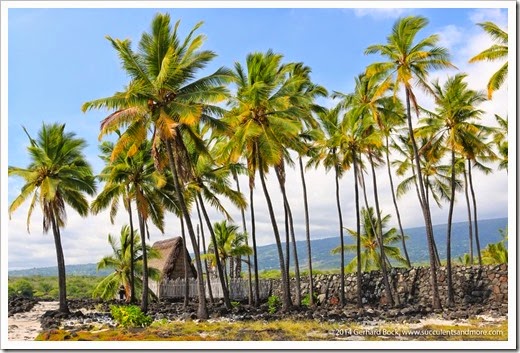 Wall separating the royal grounds from the place of refuge, with Hale o Keawe on the left 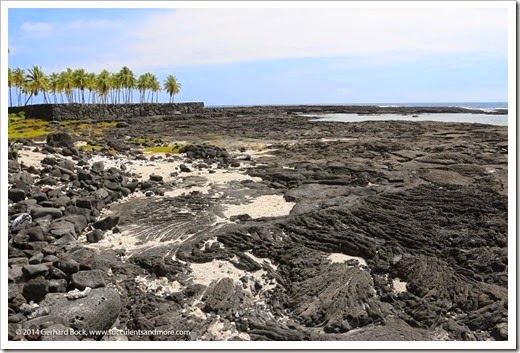 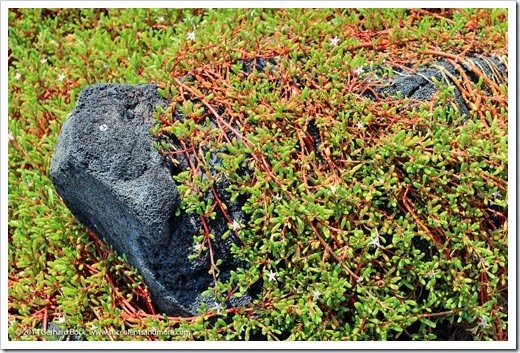 Swamp crassula or pygmyweed (Crassula helmsii), a New Zealand native, has naturalized here and is considered an invasive weed 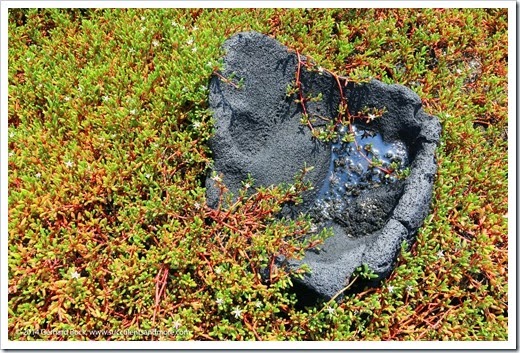 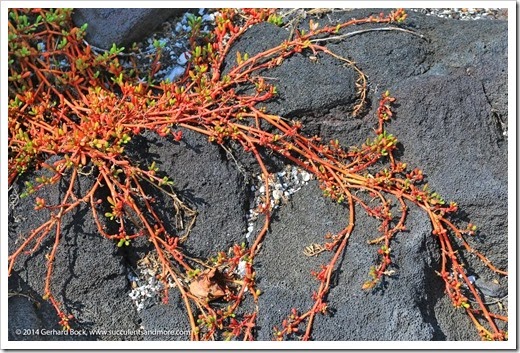 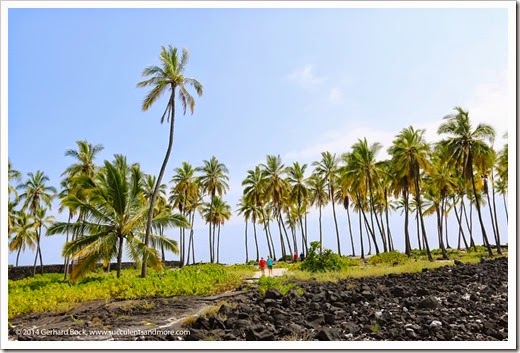 Who can resist the exotic splendor of coconut palms! 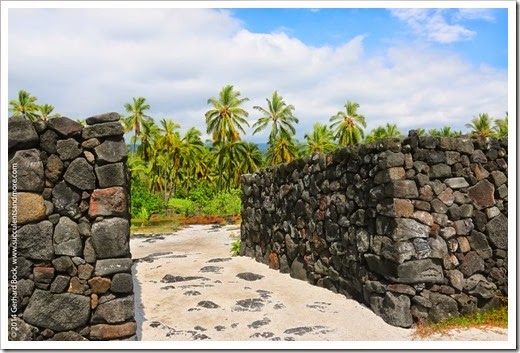 Opening in the massive stone wall 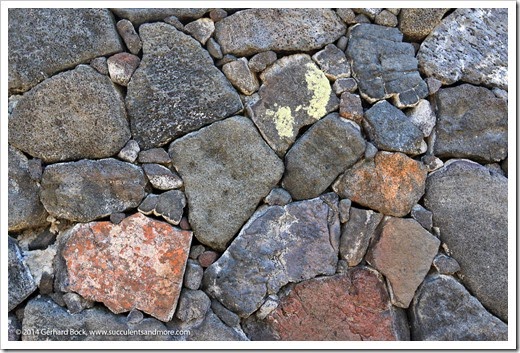 Wall detail. The wall was built in the 1500s entirely without mortar. While it has been stabilized by the National Park Service, it’s still mostly original. 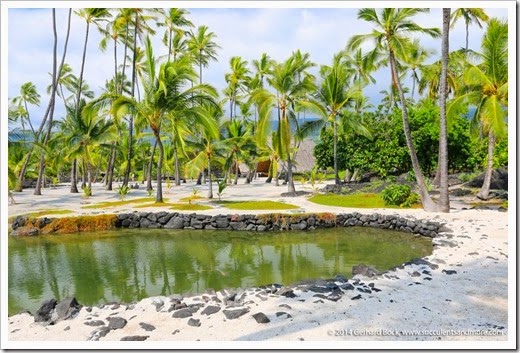 One of the royal fish ponds. The fish were reserved for the aliʻi, or chiefs. 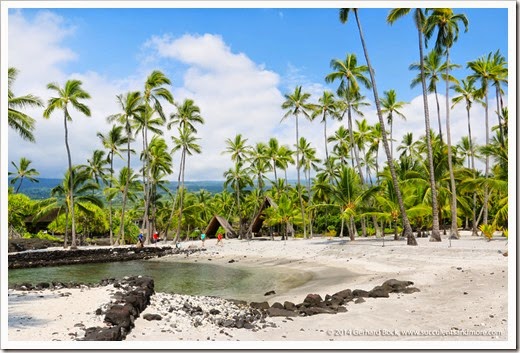 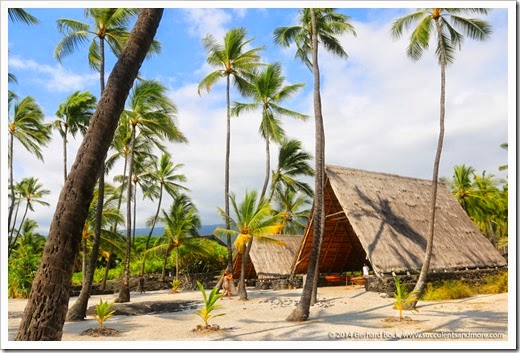 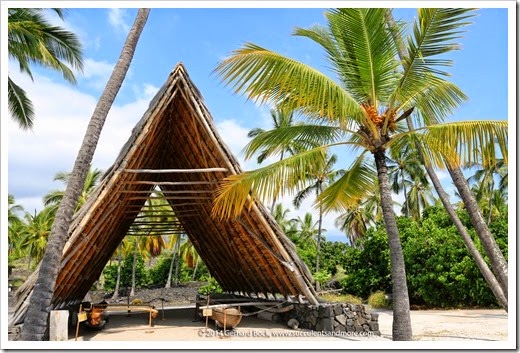 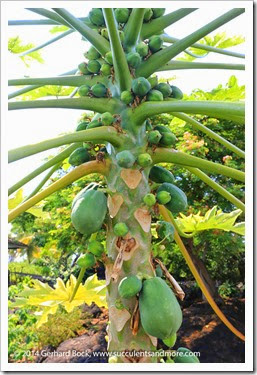 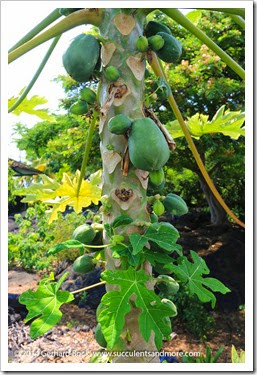 Papaya near the Visitor Center 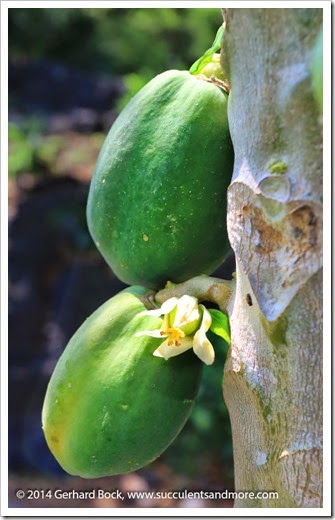 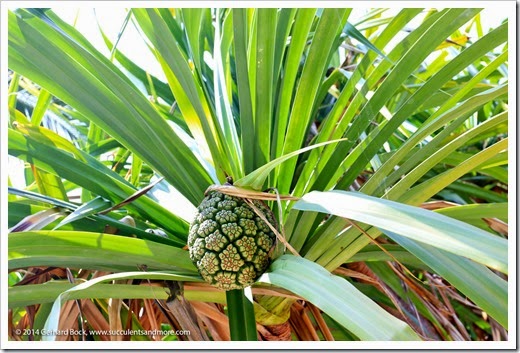 Fruit of the screwpine, or hala (Pandanus tectorius) 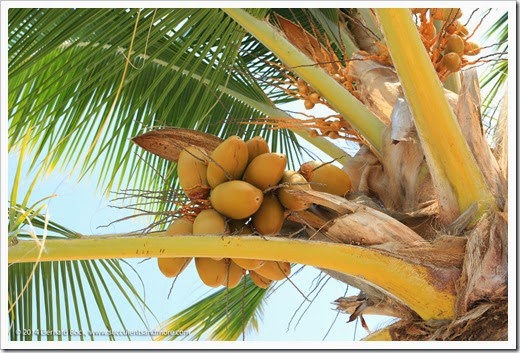 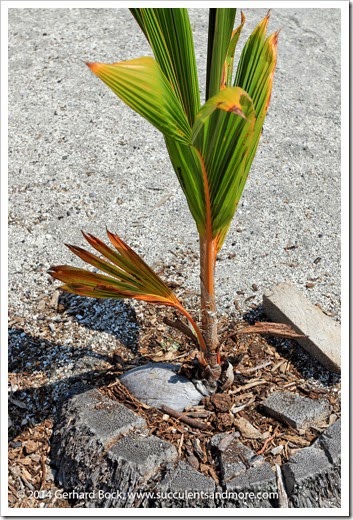 So how do you pronounce Puʻuhonua o Hōnaunau again?

If you want to practice further, here are some names of Hawaiian kings and chiefs that practically roll off the tongue: Keaweʻīkekahialiʻiokamoku, Kekaulike-i-Kawekiuonalani, Umiulaikaahumanu, Kalanikauleleiaiwi.