After spending six days on the outrageously green eastern side of the Big Island, the arid landscape of the northwest corner of Hawaii was a surprise—but at the same time a welcome sight. When I saw the wide open expanses, with little to block your view, I realized just how confining the tropical rainforest had been. Don’t get me wrong, I enjoyed the jungle scenery tremendously, but it’s clear that I’m more of a desert person at heart.

Just take a look at how wonderfully sparse this landscape is:

The mountain you see looming in the background in the panorama above is the island of Maui. It’s 26 miles away.

Most of the trees dotting the arid plains on the west side of Hawaii are kiawe (Prosopis pallida), a mesquite native to Columbia, Ecuador and Peru. It can survive where few other plants can. When deprived of water, it only grows to the size of a shrub or small tree. Where precipitation is plentiful, it can grow to 85 ft. in height. 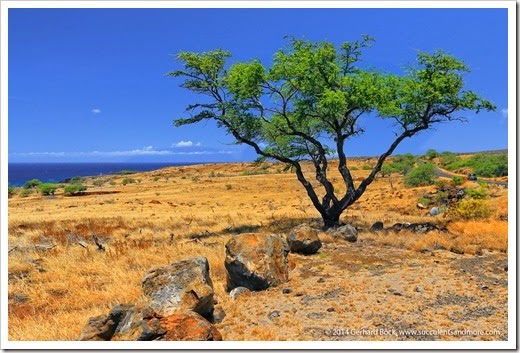 Apparently all the kiawe trees in Hawaii can be traced back to a single seed Father Alexis Bachelot, the head of the first catholic mission to Hawaii, brought with him from the royal garden in Paris. The seed was planted in 1828, and by 1840, the offspring from that one tree had become the dominant shade trees in Honolulu. Today Prosopis pallida is found in huge numbers of Maui and Hawaii where they are considered by some to be a nuisance at best, or a pest at worst. 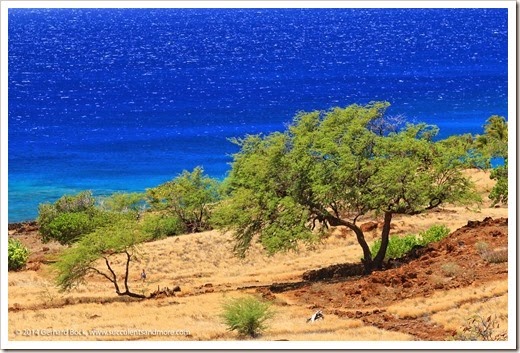 Still, the kiawe is very useful as a shade tree and provides valuable firewood. The seed pods are used as livestock fodder, and the light yellow flowers attract bees, which in turn produce the renowned white mesquite honey. 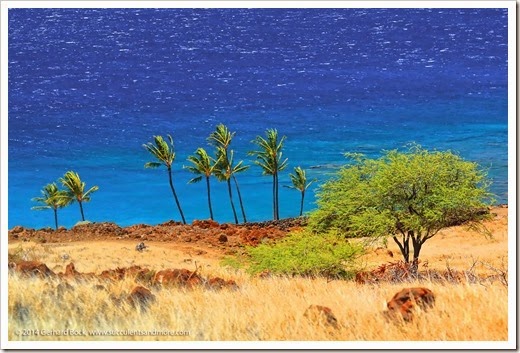 After driving up the Kohala Coast we had lunch at Gill’s Lanai in Kapaau (enthusiastic thumbs up from all of us). While waiting for our food, I took a series of pictures of this little guy, another green anole: 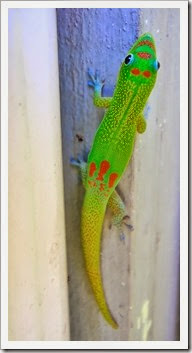 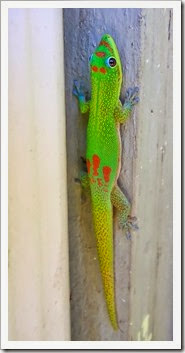 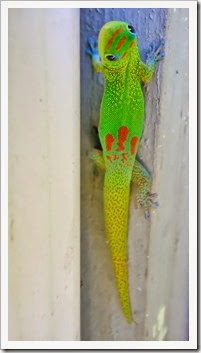 The road past Kapaau ends at the Pololū Valley Overlook. As the crow flies, Pololū Valley is only about 12 miles from Waipiʻo Valley, which we’d visited the other day. However, the terrain in between is extremely rugged and it takes days to hike from one valley to another. The view from the overlook, and to a lesser extent from the trail down, was stunning. 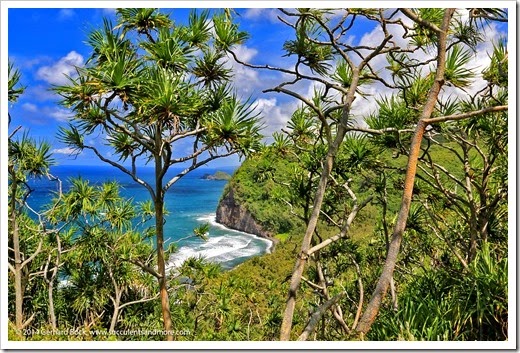 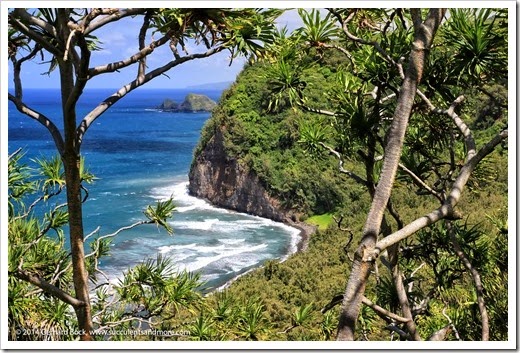 On our way back to Kapaau from the Pololū Valley Overlook I spotted this impressive tree house in a very large banyan tree: 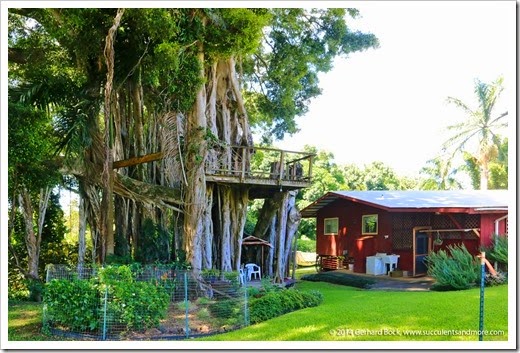 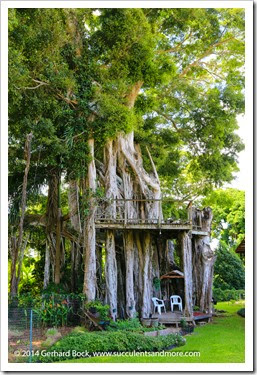 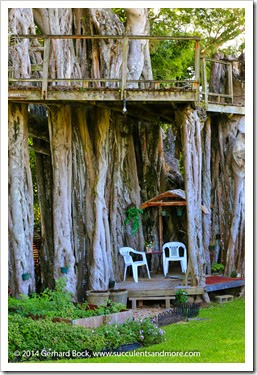 Can you imagine how much fun it would be for a child to have this tree house in their backyard!

Instead of returning on the coastal route (Route 270), we took the Kohala Mountain Road (Route 250). It crosses the heart of the cattle country of northern Hawaii, cresting at 3,500 ft. Unlike the very arid landscape on the northwestern coast, this area is lush and green, with expansive views towards the south, east and west. 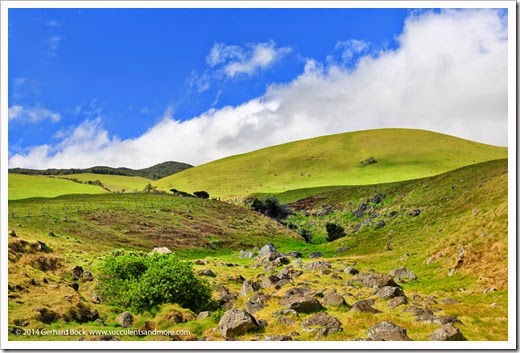 From several spots along the road you can see Maui looming in the distance: 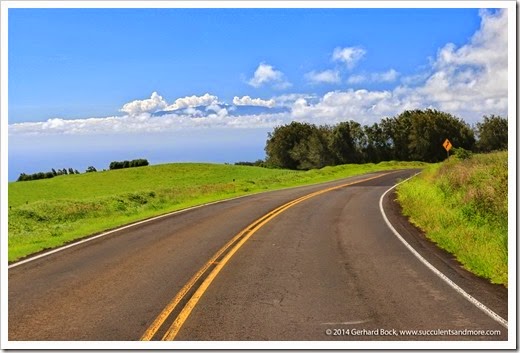 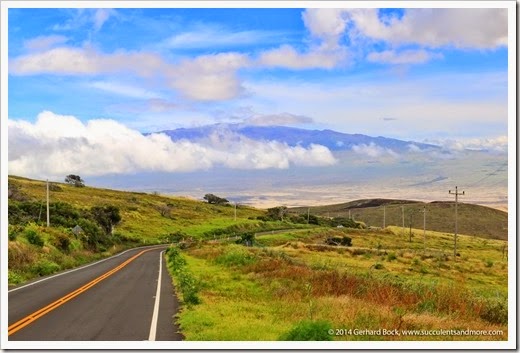 Here are a few more shots taken on the Kohala Mountain Road just outside of Waimea: 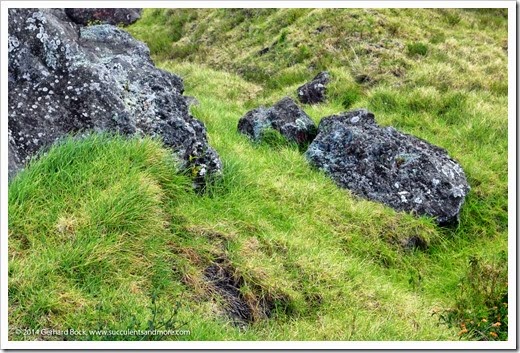 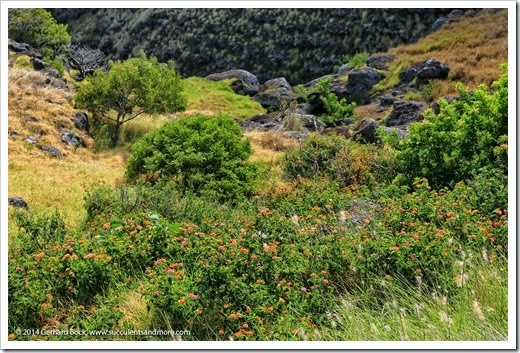 Lantana camara. At home it’s sold in nurseries, here it is has naturalized and is considered an invasive weed.

On a completely unrelated note, there’s a botanical garden literally minutes from our rental house, Pua Mau Place Arboretum and Botanical Garden. Usually I’d be jumping up and down with excitement, but the Trip Advisor reviews aren’t great. 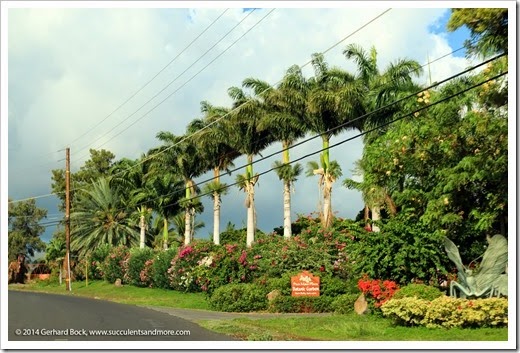 Should I pass, or should I sacrifice myself for the greater good and check it out? I could walk there in less than 10 minutes…