Hawaii: Driving up the Hāmākua Coast

On Monday it was time to leave our first vacation rental in Pahoa and move to our second home away from home on the Kohala Coast on the northwestern tip of the Big Island. To get there, we drove up the Hāmākua Coast, crossing over to Waimea, and finally dropping down to the ocean at Kawaihae.

But let’s start at the beginning. Our first stop was the Hawaii Tropical Botanical Garden, which I had visited on Saturday. It’s such a special place that I wanted my family to see it, too. Unfortunately, the humidity was off the charts, putting a bit of a damper on the experience.

I took another 100 photos, the best of which will go into my dedicated post (look for it in August). Here are a few more teasers. 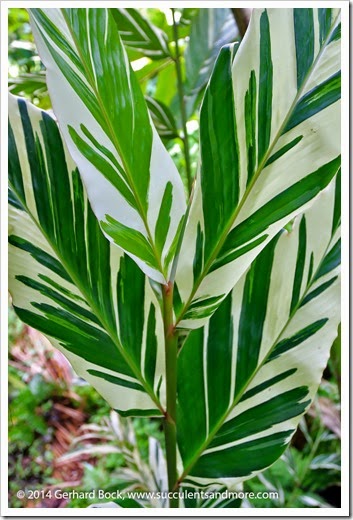 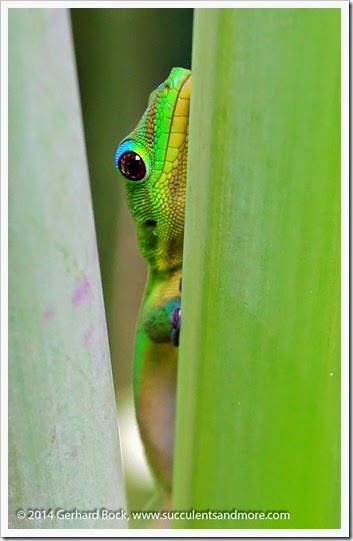 Green anole (Anolis carolinensis). Native to the southeastern U.S., this lizard escaped from pet stores into the wild in the 1950s and is now a common sight. 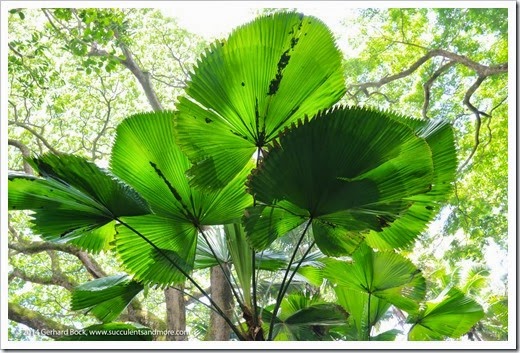 Our next stop was at ʻAkaka Falls, not far off the Hawaii Belt Road (Highway 19). This spectacular waterfall is considered one of the most scenic on the Big Island. It’s certainly the most accessible, and hence the most visited, of the taller falls.

This is the view right from the parking lot: 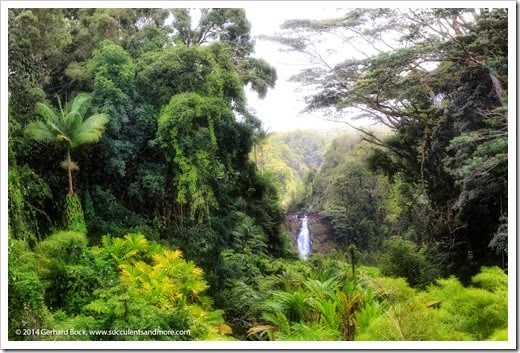 The trail takes you to several groves of painted bamboo (Bambusa vulgaris ‘Vittata’). It may be common here on the Big Island, but for me it’s still an arresting sight every time I see it. 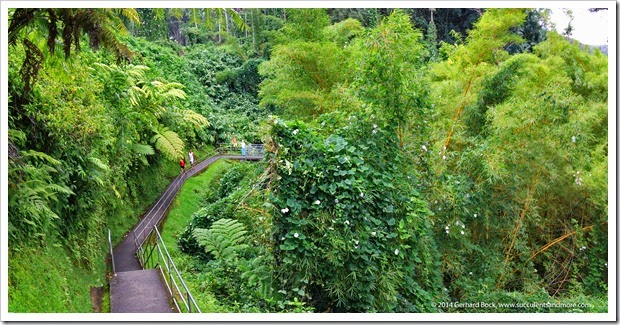 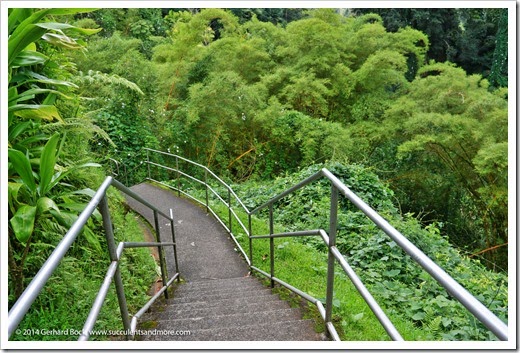 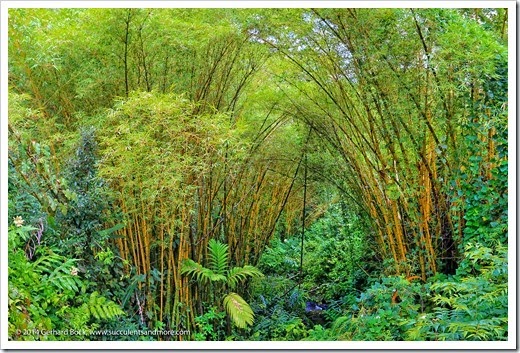 The waterfall itself is pretty impressive, too. 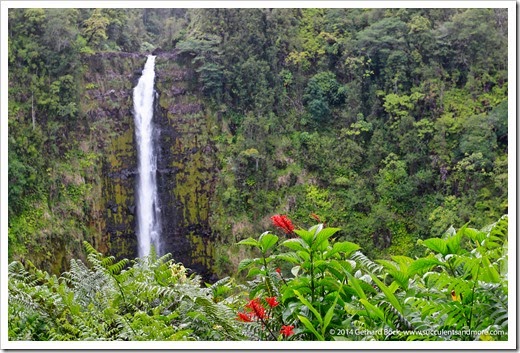 It drops 422 ft. into a deep gorge clad in velvety green. The setting is impossibly scenic and timeless. You almost expect dinosaurs to roam at the bottom of the gorge. Think Jurassic Park, which was filmed on the island of Kauaʻi. 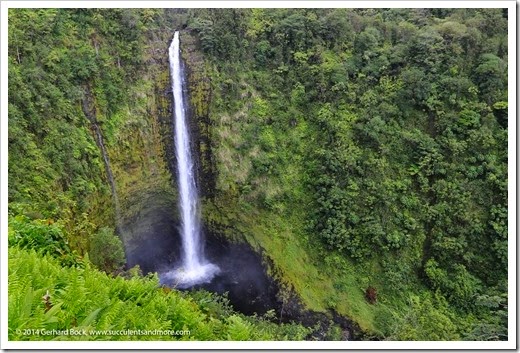 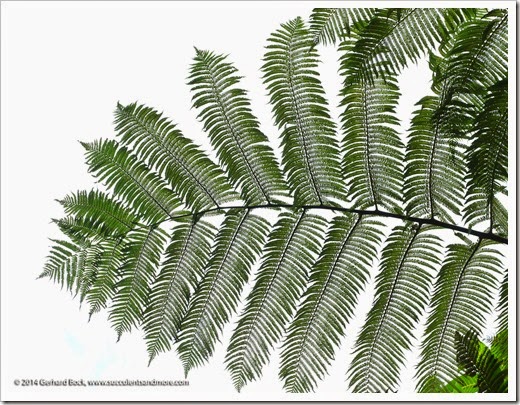 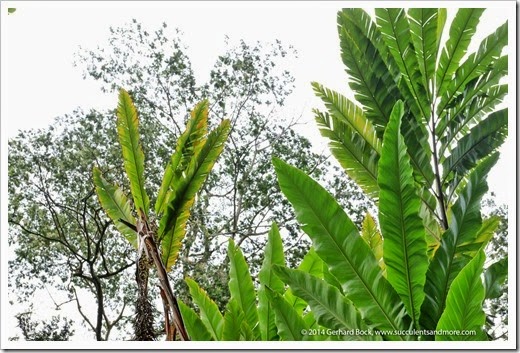 Our third and final stop was at the Waipiʻo Valley Lookout  on the northeast side of the island. It is widely considered to be the most beautiful spot anywhere on the island. 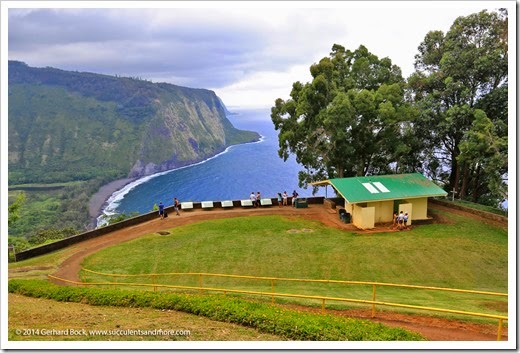 For a thousand years, fertile Waipiʻo Valley was an important agricultural, political and religious center for the native Hawaiian people. Known as the “Valley of the Kings,” it was home to many of the island’s rulers. Oral history says that as many as 10,000 people lived in Waipiʻo Valley before the arrival of Captain Cook in 1778. The spirit of 50 generations of Hawaiians who lived and died here is said to live on in the land until this day.

With the influx of other groups in the late 1800s, among them Chinese immigrants, a real town emerged at the valley floor, complete with churches, schools, a hotel as well as a post office and a jail.

Everything changed in 1946 when the most devasting tsunami in the history of Hawaii destroyed practically everything in Waipiʻo Valley. Most people left and the valley was virtually uninhabited for the next 20 years. In the 1960s and 70s hippies and discharged Vietnam veterans who wanted to get away from it all discovered the valley and found it ideal for their way of life. Today, about 50 people live there permanently, with no services of any kind, and they have a reputation of not being very friendly towards outsiders.

The road into Waipiʻo Valley, while paved, is insanely steep. With a 25% grade, it is considered to be “the steepest road of its length in the United States[2] and possibly the world.” It’s accessible only two 4WD vehicles. 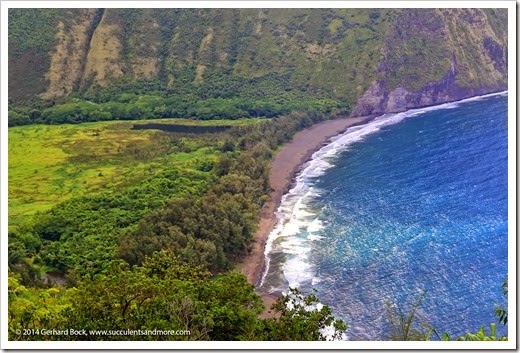 After 6 hours in the car, everybody was ready to relax so we headed to our Kohala vacation rental where we will stay until we fly home next week. Located at 500 ft. above sea level, the house doesn’t have the jaw-dropping oceanfront exposure the house in Pahoa did, but the panoramic views of the coastline are just as spectacular.

As you can see in the next photo, there is dry grass—something you just wouldn’t see on the Hilo side. It turns out the Kohala area is the driest on the Big Island; it only gets an average of 10” of rain a year, compared to 150” (!) or more on the Hilo side. 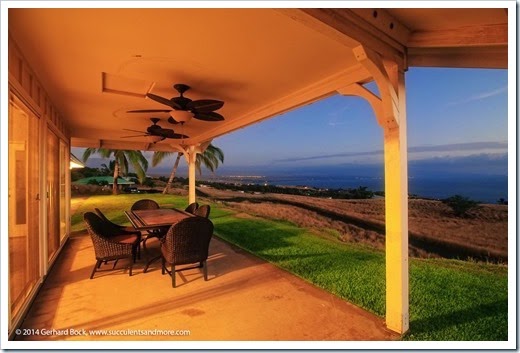 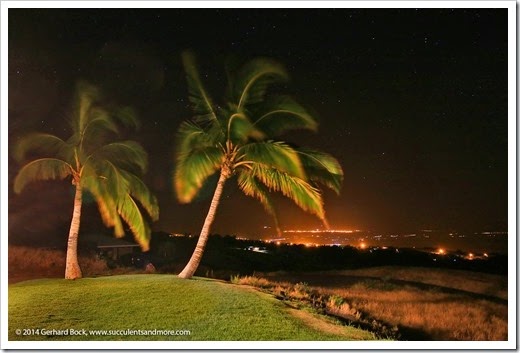 Yes, there is a pool and hot tub, both overlooking the ocean. After this, how will we ever settle back into our daily routine at home? But vacation is supposed to a fantasy, the antithesis of real life, so I guess we’ll adapt. 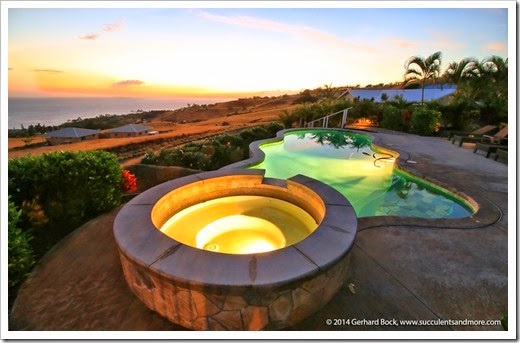 The landscaping around the pool is not mature yet, but I spotted two beautiful specimens of tropical flora last evening: 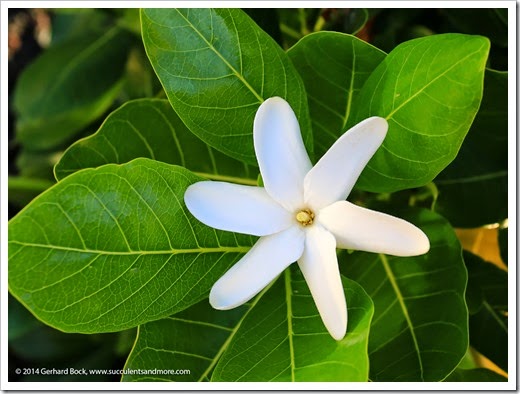 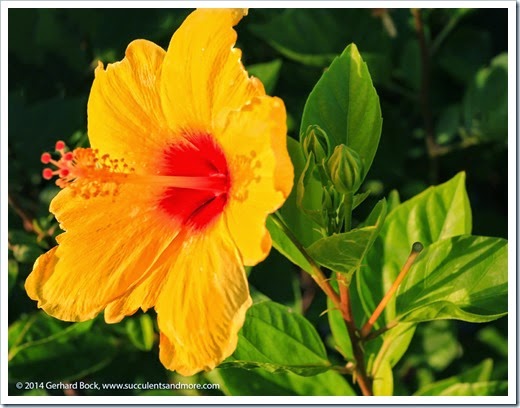 And here is the requisite map that shows the route we took yesterday. This is for myself as much as for all your map lovers out there. 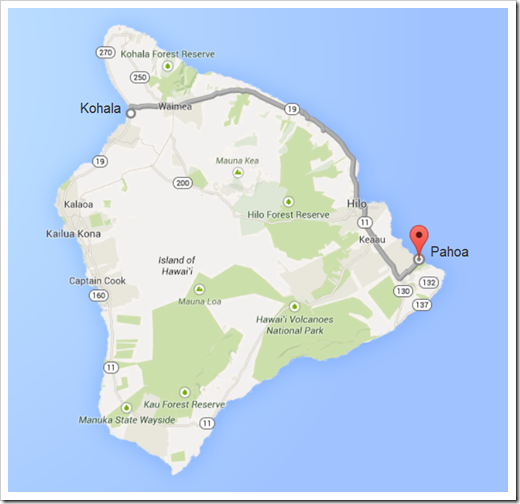