It’s been 3½ months since since we removed the Pittosporum tobira hedge next to the house and built a mounded “desert bed.” This is what it looked like right after we’d put in the plants on March 16, 2014: 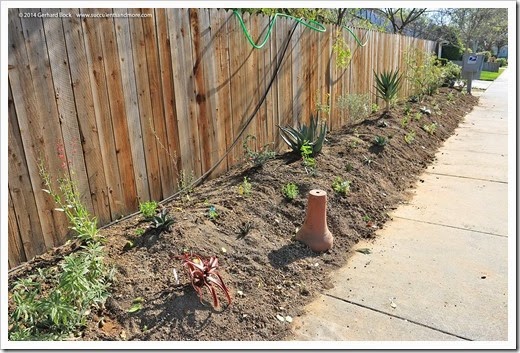 And the same view now in the third week of June: 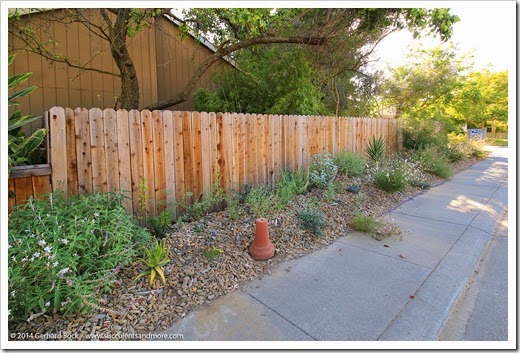 Let’s take a closer look. Some plants, above all else the perennials and the shrubs, have put on a tremendous amount of growth—more so than I ever expected. Being slower growers by nature, the agaves and aloes will need another season or two before you’ll see noticeable progress. 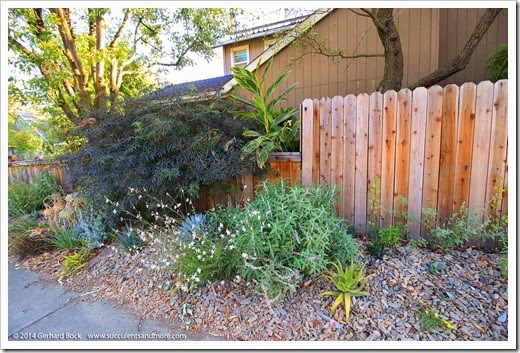 The three Gaura lindheimeri ‘Snow Fountain’ have exploded. Here is one of them. 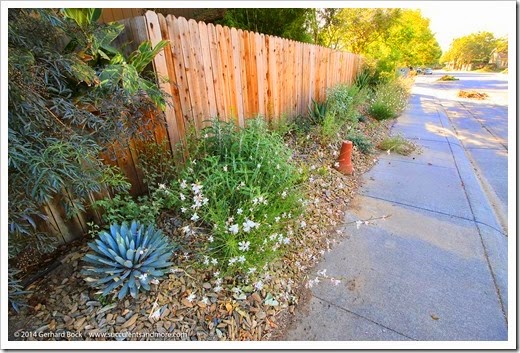 And the same view in the opposite direction. The Agave macroacantha I bought at the UC Botanical Garden has settled in nicely and is actively growing, judging both by the number of new leaves and a new offset I recently spotted. 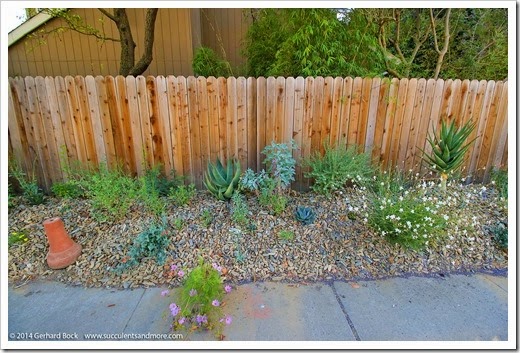 In March I scattered a package of “dry land” seed mix in this corner of the bed, and the cosmos (Cosmos bipinnatus) you see in the front is one of a half dozen plants that have come up. 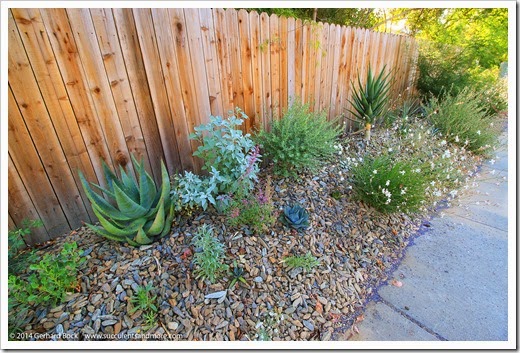 The brittle bush (Encelia farinosa) next to the Aloe ferox has doubled in size, and the Texas ranger (Leucophyllum frutescens ‘Compacta’) to the right of it isn’t far behind. 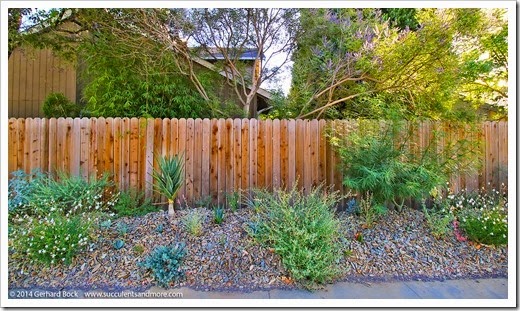 I wish I had measured the Aloe ‘Hercules’ when I planted it—a major oversight. It has a reputation as a very fast grower. I think it has gotten taller but I don’t know for sure. 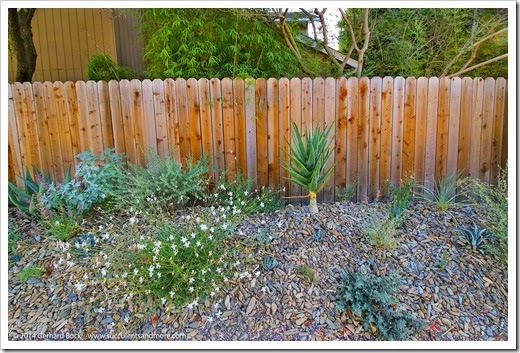 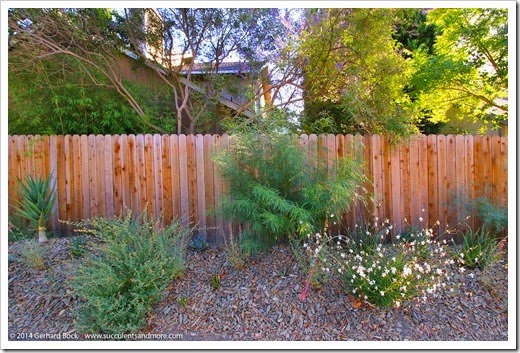 The award for the growth champion goes to our ‘Sonoran Emerald’ palo verde (Parkinsonia ‘Sonoran Emerald’). It bloomed like crazy and has almost doubled in size since I planted it. That’s quite a feat! 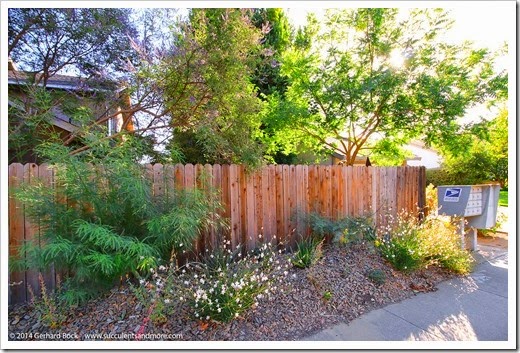 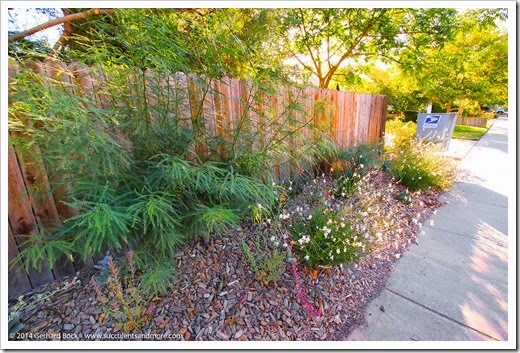 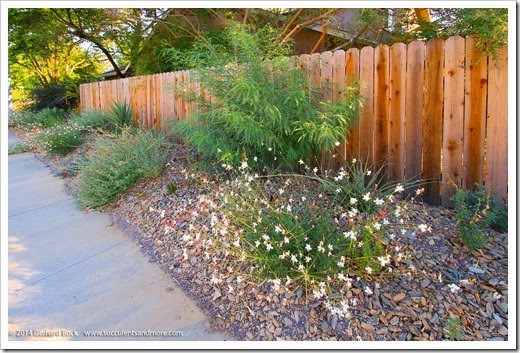 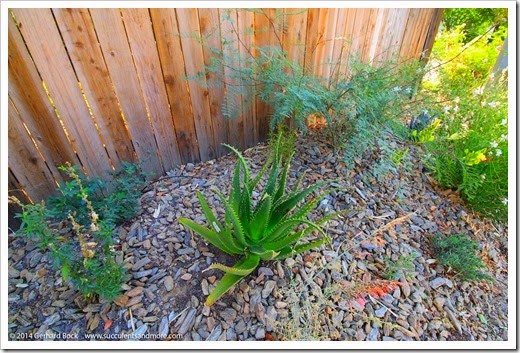 The newest addition to this bed is Aloe ‘Erik the Red’. It replaced a small Aloe marlothii that I moved elsewhere. ‘Erik the Red’ is a complex hybrid that will grow to 6-8 ft. tall by 2-3 ft. wide. In the winter it produces blood-red inflorescences. I’m hoping that with a half dozen medium-to-large winter-blooming aloes (Aloe ‘Erik the Red’, Aloe ferox, and three Aloe ‘Moonglow’) this bed will be attractive even at the least exciting time of year.

There have been a few casualties. A couple of the the seed-grown sundrops (Calylophus hartwegii) fried in the sun. The other four are fine. Some of small agave seedlings are barely hanging on or may already be past the point of no return (Agave deserti var. simplex, Agave cerulata ssp. nelsonii, Agave zebra). It’s too early to tell whether they will pull through.