On Monday, agave expert extraordinaire Greg Starr gave a presentation entitled “Agaves as Living Sculptures” at the Sacramento Cactus and Succulent Society (SCSS). Greg had traveled all the way from Tucson, AZ especially for this talk, and I was thrilled to see so many people show up—not just club members, but new faces as well. There’s no better validation for a speaker than a large turnout, and we certainly had that. 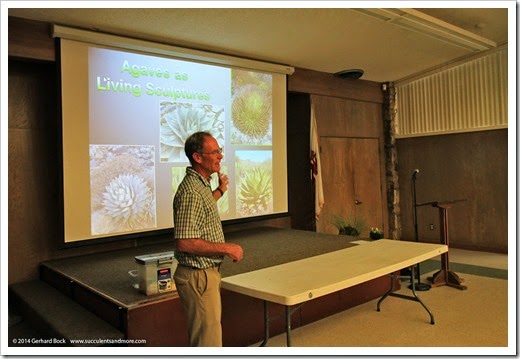 Before the start of Greg’s presentation there was ample time to admire—and buy!—the plants he had brought.

As the SCSS Program Chair I was busy with other things and didn’t get a chance to take photos of the plant table right away. By the time I got my camera out, many plants had already been snapped up. 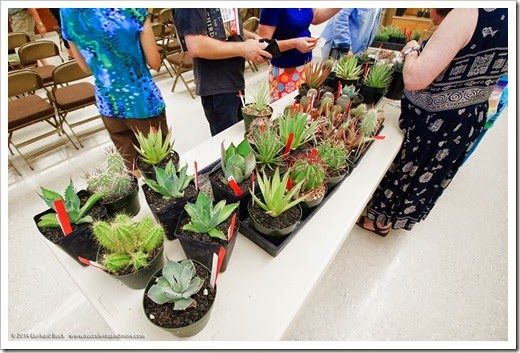 It goes without saying that Greg brought a good selection of agaves, including some rarities like the much sought-after and stunning beautiful Agave victoria-reginae ‘Snow Queen’ (much like this one, but in a smaller size) and an Agave petrophila, which I managed to appropriate. But he also brought a variety of cactus, including Astrophytum, Ferocactus and Echinocereus. 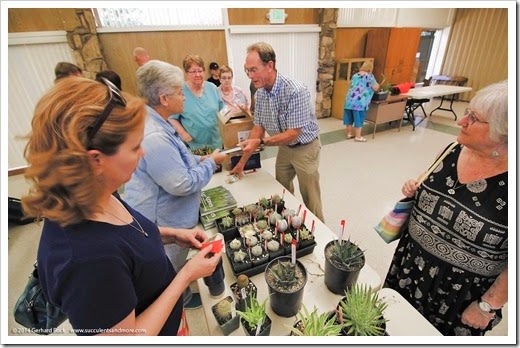 In addition, Greg had copies of his Timber Press book Agaves: Living Sculptures for Landscapes and Containers on hand. If you don’t have a copy yet, run—don’t walk!—and get one. In my opinion, it is the best book on agaves out there for general-interest gardeners and plant lovers. Click here to take a look inside the book. 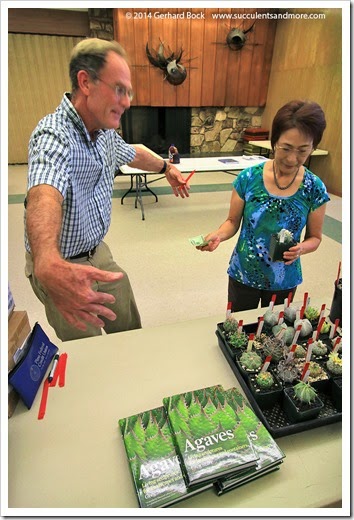 I don’t know what Greg was demonstrating to SCSS member Oksun Avery in the photo above, but it must have involved a very large agave!

After some other matters and the monthly raffle—with plants provided by Greg—it finally was time for Greg’s presentation. I think he was as eager to get started as the audience was! 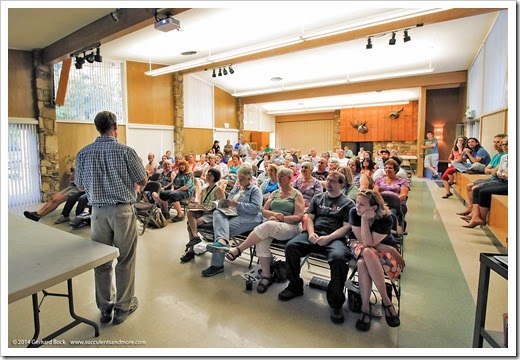 Greg’s talk focused on a dozen select species (Agave bovicornuta, gentryi, montana, multifilifera, ovatifolia, parryi, schidigera, striata, stricta, victoria-reginae and zebra) to illustrate the range of sizes, shapes and textures that exist in the agave kingdom. In breathtaking photos he took us to Mexico—the epicenter of all things agave—and described some of his adventures photographing agaves in habitat. I don’t know how many plant expeditions Greg has been on in Mexico, but it must have been dozens (Tucson’s vicinity to Mexico certainly helps cut down on travel time). In recent years he has been studying the agaves of Baja California—most of which are not in cultivation in the U.S.—and he is in the early stages of writing a book on the subject.

Some of the photos we saw in Greg’s presentation are also in his Timber Press book, but others were brand-new, taken on a May 2014 trip to Central Mexico. It’s one thing seeing a beautiful agave in somebody’s yard or in a botanical garden, but it’s an entirely different experience seeing it in its native environment. I would love to go on a plant expedition to Mexico someday.

Knowing that most people don’t have an in-depth knowledge of Mexican geography, Greg thoughtfully showed a map for each agave species he talked about, with its distribution circled in red. This really helped me understand where each species comes from, which provides some clues to its ability to thrive in our area. While Greg’s talk didn’t specifically focus on the cultivation of agaves, he did provide information on cold hardiness, sun/shade preference, etc. More detailed cultivation information can be found in his book.

When Greg got to Agave zebra (he presented the species in alphabetical order) I knew that he was almost done, but I could easily have listened to him talk for another hour. In addition to being a veritable fount of knowledge, he also has a wicked sense of humor, and he had the audience in stitches more than once.

I can’t recall the last time I enjoyed a plant-oriented presentation more. I hope we will have a chance to welcome Greg back to Sacramento soon for another exciting talk on agaves. By then he probably will have squeezed in a few more trips to Mexico!

Side note: Greg has also written what I think is one of the best general-interest books on plants suitable for hot climates like the Southwest and California’s Central Valley. Titled Cool Plants for Hot Gardens (Rio Nuevo, 2009), it is sadly out print but your local library might be able to get a copy through interlibrary loan.