Camellia and daphne and … agave?

Once upon a time, water seemed plentiful in our corner of California, I planted bamboos wherever I could, and this blog was known as Bamboo and More. In those halcyon days, the Borinda papyrifera in our backyard was lush and green because it was getting enough water (mostly thanks to thrice-weekly irrigation). 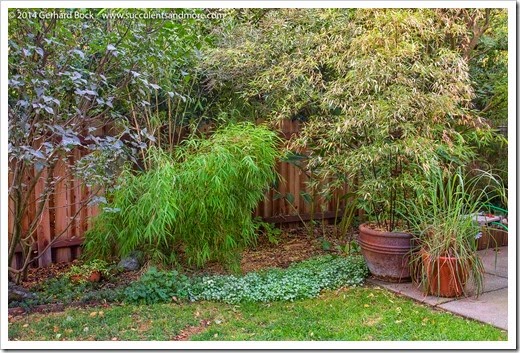 Fast forward to 2014. California is in the iron grip of a multi-year (permanent?) drought. I’ve cut back our irrigation schedule to once a week. Most Mediterranean-type perennials and succulents aren’t fazed, but many of the bamboos are suffering, especially the ones in pots but also Borinda papyrifera.

Earlier this year it became clear that this bamboo wasn’t going to look good enough on less water. The new shoots were smaller in diameter than last year’s, which would lead to even more flopping and an even more disheveled look. After much back and forth, I finally made the difficult decision to take it out. The actual removal took place in May, and it was far less strenuous than I had thought. A shovel and pry bar was all I needed. I think the plant was so weakened by the lack of water that it wanted to be put out of its misery.

For a while I wasn’t sure what I wanted to do with this space, which is separated by the fence from the desert garden bed we created a few months ago. It’s sheltered overhead both by our chaste tree and our lilac so it’s fairly well protected from the hot late afternoon sun while still getting a good amount of sunlight in the late morning and early afternoon. Parts of this area are visible from the kitchen window so I wanted something interesting to look out on.

I don’t know when exactly it happened, but at some point last week a light bulb went on in my head. Why not combine plants I already had in a way that was completely unexpected? Who knows how this will play out in the long term, but this is what this area looks like as of today: 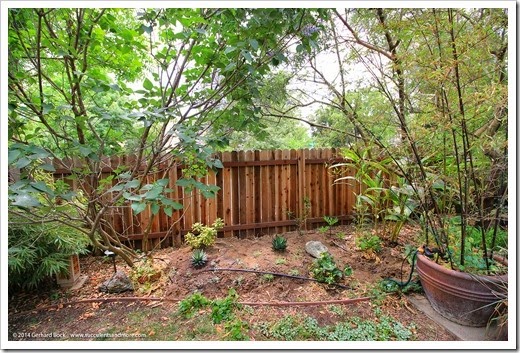 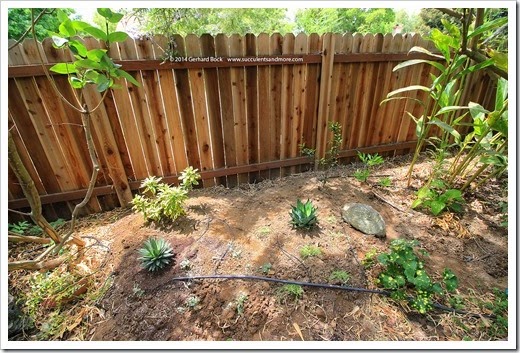 On the left, in the back, is the Daphne odora ‘Maejima’ I gave my wife for Valentine’s Day. It had been in a pot since then and it had proven to tolerate far more sun than I had ever expected while becoming ever more variegated. I know I had vowed never to put a daphne in the ground again, but I planted it on a mound so it’s almost like growing in a pot. 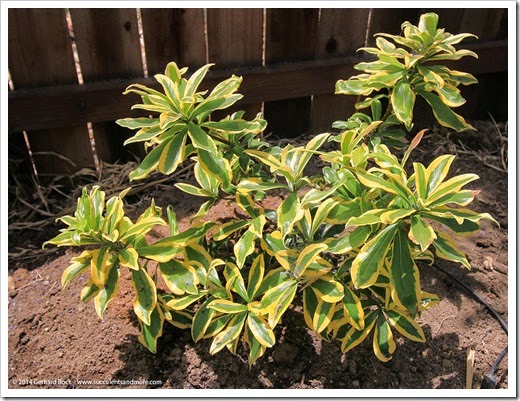 In front of the daphne is a Queen Victoria agave (Agave victoria-reginae) that had been in a talavera pot for the last few years. It was in need of repotting, and putting it in the ground is even better. 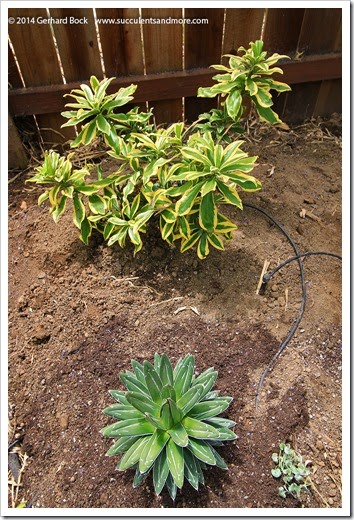 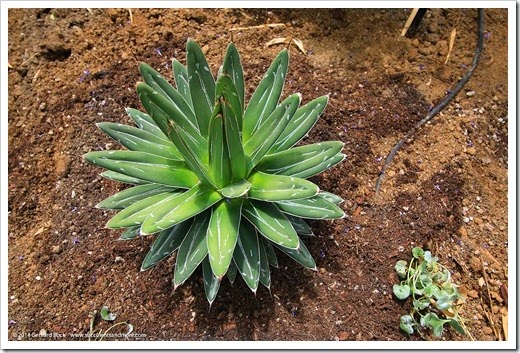 About 5 ft. to the right is an Agave montana, one of the most beautiful agave species. I recently bought it at Green Acres Nursery in Sacramento. It had been on sale for $25 in a #5 can; a very good deal. This is my fourth Agave montana; two are in the driveway succulent bed, and the third one is in a shallow bowl on the backyard patio. 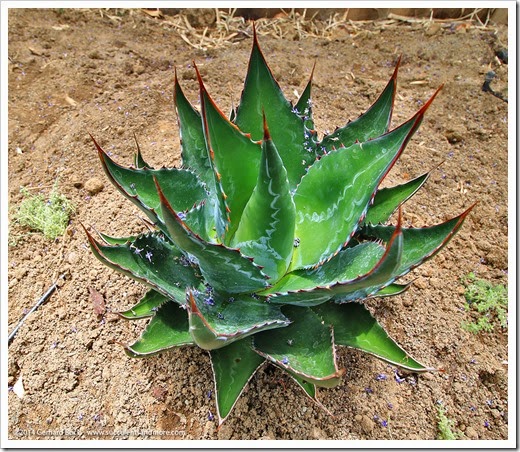 The two agaves are surrounded by two groundcovers: silver ponysfoot (Dichondra argentea 'Silver Falls') on the left, and woolly thyme (Thymus pseudolanuginosus) on the right. I planted one six-pack each. I’m not sure they get enough sun here but time will tell. And they were cheap, at less than $3 per six-pack.

On the right-hand side of this area is a Camellia ‘Night Rider’. I first saw one at the 90th Sacramento Camellia Show in early March. As I said in my blog post then:

I’ve got to say a word about ‘Night Rider’. The flowers, though small and relatively simple, were utterly stunning. They’re a dark burgundy, darker than in my photo above, and when I laid eyes on them, I knew I had to have a plant. (This page has much better photos.) Unfortunately, the sole plant vendor at the show was already sold out. In addition, it seems ‘Night Rider’ is one of the rarer varieties and fairly difficult to obtain. As luck would have it, though, Peacock Horticultural Nursery in Sebastopol, which I profiled last fall (here and here) has a couple in stock, and one of them now has my name on it. I will grow it in a pot under the bay trees in the backyard where I can enjoy its flowers up close.

Last Saturday, after the Garden Conservancy’s Marin County Open Day, I swung by Peacock Horticultural Nursery to pick up my Camellia ‘Night Rider’ (I’ll have a separate post on the wonderful goodies I saw at Peacock). I planted it closer to the fence so it’s protected from the sun during the afternoon but still gets a bit of late morning and noon sun. It should be a good spot for it. We’ll see next spring. If it flowers, it likes its new home!

The three smaller plants on the right in the next photo are voodoo lilies (Amorphophallus konjac). Years ago I was given three small corms by a UC Davis student and the plants come back every summer, slightly larger each time, but still too small to flower. 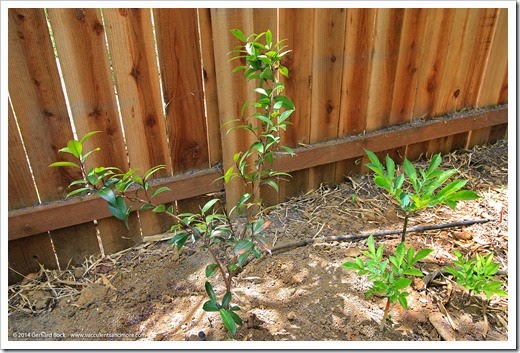 Here is one final photo of the two agaves and the daphne. I took it from the dining room with a telephoto lens. The long lens compressed the perspective so much that the plants look like miniatures in a scale model! 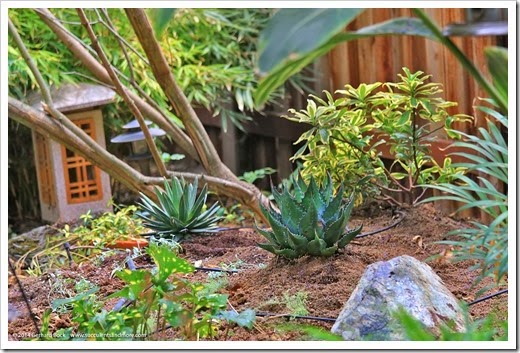 I was a bit hesitant to write this post because the space looks looks very raw and not as attractive as it will be after I’ve added more rocks and mulch. But since this blog is a visual diary of what I do in the garden, I wanted to have this baseline for future reference.