One of the presentation at the 2013 Succulent Extravaganza was entitled “Coring agaves.” What does that mean, you might ask? I must admit I didn’t really know either when I arrived at Succulent Gardens. Since the talk was about agaves, my favorite group of plants, my curiosity was piqued, and yet for a brief second I toyed with the idea of skipping it in favor of hanging out with other Succulent Fanatics folks. In hindsight, I’m very glad I didn’t because it ended up being my favorite presentation of the entire event. 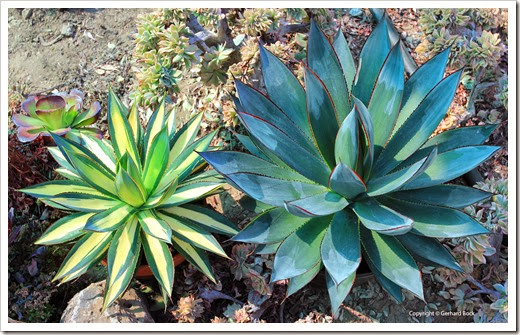 The presentation was given by Tony Krock, succulent buyer for and co-manager of Terra Sol Garden Center in Santa Barbara, CA. (Click here to read about my visit to Terra Sol this spring. Unfortunately, I didn’t know Tony at the time.) Tony is a passionate collector of variegated agaves and has been very successful in creating specimens that show a high degree of variegation. His secret? Coring! Tony Krock holding up a growth tip he had snapped off

In a nutshell, coring involves removing the growth point in the center of the agave, essentially killing the apical meristem. This causes the agave to produce pups in order to survive. On a variegated specimen, this technique can be used in conjunction with selective leaf removal to produce pups that show better variegation.

Take an agave that shows uneven variegation. The leaves on one side might be mostly green, the leaves on the other side might show much better variegation. You pull (or cut) off the leaves with the most variegation and leave the less variegated leaves to produce energy for the plant. This causes pups to grow on the side that had more variegation; these pups will show a higher degree of variegation than the mother plant.

The next step is to snap off the growth point in the center of the agave—the growth tip that will become the next set of leaves—and then take a sharp tool to dig down until you’re almost at ground level. Tony used a “snake tongue” hand weeder like this one. Other people use a drill or even a sharpened and heated piece of metal. This is not an exact science so use whatever you have on hand. The goal is to remove the “core” of the agave to kill the meristem which produces new growth. 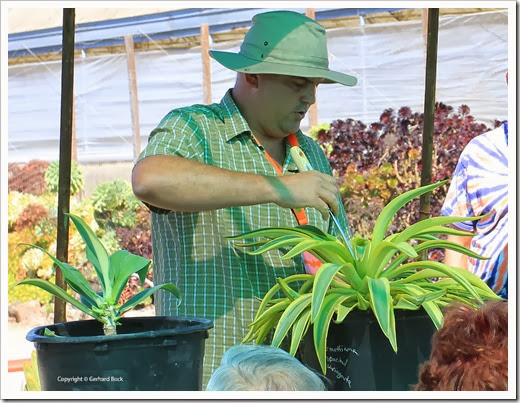 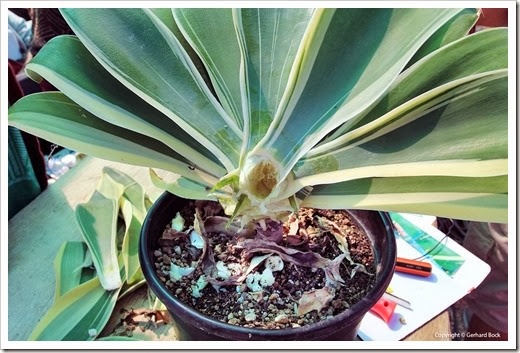 Treat the plant like you normally would and over time (1-3 months, depending on the time of year), you will see pups emerge from where the removed leaves had been: 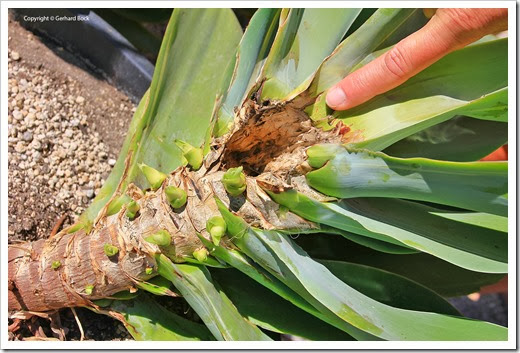 When the pups have reached a decent size (3-4 inches), separate them from the mother plant with a sharp knife. Leave them in a dry, shady place for 5-7 days so the cut surfaces have a chance to callus over, then put them in a pot filled with dry succulent mix. Lightly moisten the soil and then water only after the soil has dried out completely—err on the side of under-watering to prevent rot. In the warm weather, the pups should start to root within a month.

According to Tony, the best time of year for coring is late spring or early summer when the plant begins its active growth phase. In a warm climate—or in a greenhouse—you can core at any time of the year.

Judging from their reaction, it was obvious that most of the people in the audience had never seen or done this before. As Tony was pulling off leaves, snapping off the growth tip and coring out the center—all very cheerfully and nonchalantly—the audience was groaning and/or inhaling sharply. Never having witnessed this kind of treatment, I was no exception. “It’s plant torture,” one man called out.

Tony reassured us that in spite of looking brutal this technique works very well. He has been able to selectively enhance what started out as uneven variegation and over the course of several generations produce strikingly variegated specimens (see the first photo in this post).

Coring is also used to propagate agave species that are generally solitary or produce few pups, such as Agave ‘Blue Glow’, Agave ovatifolia, Agave bovicornuta, etc. As I was walking through the propagation greenhouses during Candy Suter’s photo walk, I saw the successful results of coring on Agave attenuata ‘Ray of Light’: 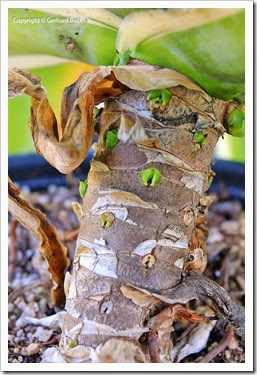 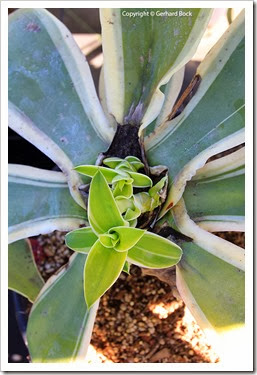 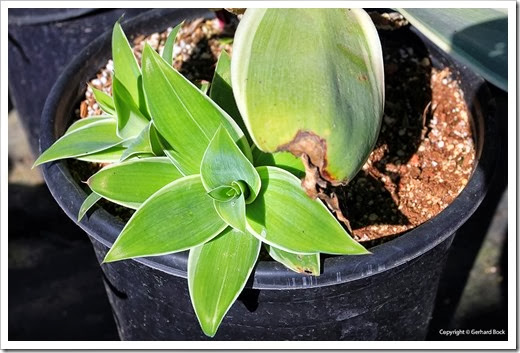 I left the presentation all pumped up and ready to do some coring of my own but I must admit I haven’t found a specimen yet that I’m willing to sacrifice for my initial experiment. Maybe I’ll simply grab something from the ugly corner…

Check out this recent post from Spiky Obsession. Coring works!