One of the plants I bought at last week’s Succulent Extravaganza was a stunning Agave guadalajarana. It was the blue form, seen on the left in this photo taken at Succulent Gardens: 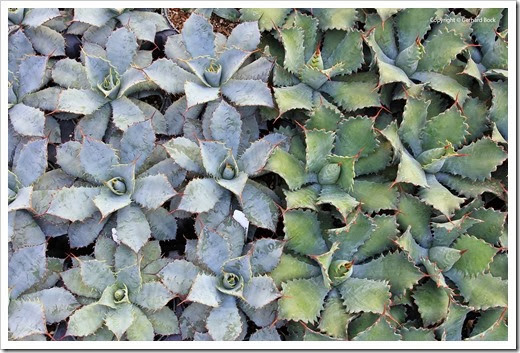 I looked through quite a few plants at the nursery before I picked what I thought was the most perfect one. I stowed it very carefully in the car so its leaves wouldn’t get bent or bruised. I unloaded it carefully when I got home so as not to damage it. And then I put in on the front porch in a spot where I thought it would be fine.

Except I forgot that this “protected” spot gets hit by the afternoon sun. Not for long, but long enough to do this: 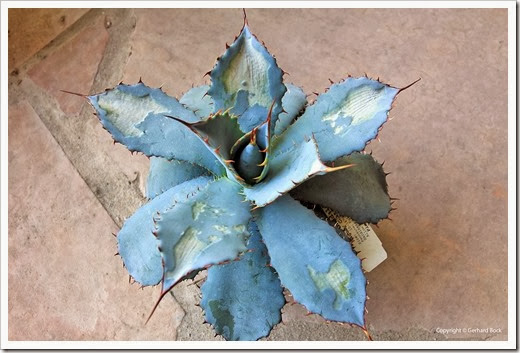 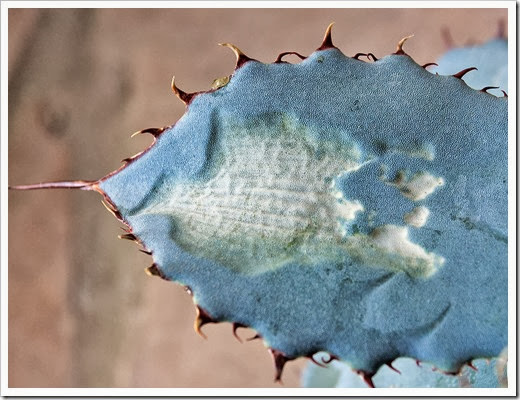 This is what happens when you suddenly expose a greenhouse-grown plant to the sun without acclimatizing it slowly.

I was so mad at myself when I saw what had happened. This was so unnecessary. And it was entirely due to my own stupidity.

I know that the damage is mostly cosmetic. But it will still take years before this agave will be beautiful again. None of this is the plant’s fault, but I can’t bear to look at it so it’ll be banished to the ugly corner in the backyard.

Moral of the story: When you bring home new plants, be mindful of the conditions they’re accustomed to. Even at this time of year the sun is still strong enough to damage plants that aren’t used to it.

Now please excuse me while I hide in the corner and cry some more.

Southern California-based garden designer and succulent expert Michael Romero suggests that the damage might be “agave edema.” At Succulent Extravaganza 2013 he talked with Robin Stockwell, the owner of Succulent Garden, about this very issue.

According to Mike, “it seems to affect agaves and other succulents when they travel during deliveries in closed trucks or trailers” and is caused by “darkness, humidity, elevation changes, and heat.”

This perfectly describes the conditions my Agave guadalajarana was subjected to. I bought it on Friday, then left it in the trunk of my car on Friday night and all day Saturday. Saturday was a fairly warm day, and temperatures inside the trunk were definitely in excess of 100°F, maybe even 120°F.

This means the sun my agave was exposed to on our front porch beginning on Sunday might not have had anything to do with the symptoms you see in the photos above. By the time I got home, the tissue was probably already damaged.