When it comes to non-stop bloomers that thrive in our hot summer sun, African daisies are hard to beat. “African daisy” doesn’t refer to one specific flower. Instead it encompasses several related genera, typically Osteospermum, Artotis and Gazania.

Osteospermums are so common in our area that they are lovingly referred to as “freeway daisies.” They thrive in hostile places like median strips of parking lots and, as their nickname suggests, along the freeway (provided they get at least occasional watering). With their trailing habit, they are a fast-growing and attractive groundcover

Arctotis are particularly elegant because of their silver foliage. I recently added two Arctotis hybrids called ‘Wine’ to the front yard.

But the most beautiful of the African daisies are the gazanias, especially the newer hybrids. They come in many different colors—white, pink, yellow, orange, red—and the flowers of the latest introductions are larger and more complex that ever before. 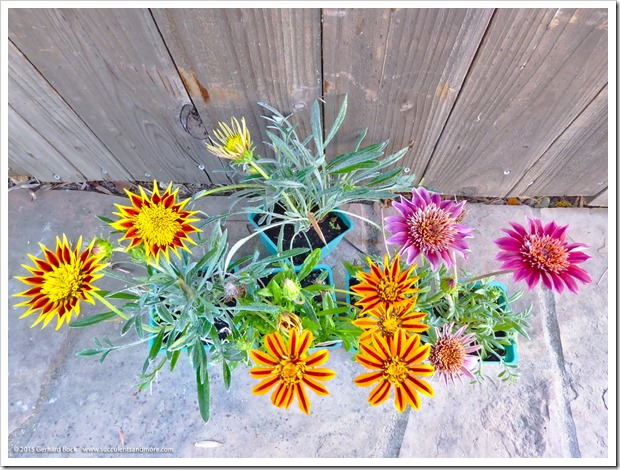 One of the newest series of gazania hybrids is called ‘Sunbathers’. Unlike regular gazanias, the flowers of these hybrids stay open in low light, at least partially. I first became aware of ‘Sunbathers” in a recent post on Kris Peterson’s awesome blog Late to the Garden Party. Yesterday I was at our local Ace Hardware to buy some mulch and I spotted several ‘Sunbathers’ for sale. I ended up buying three different cultivars: ‘Totonaca’, ‘Tikal’ and ‘Otomi’.

‘Otomi’ reminds me of a purple coneflower (Echinacea purpurea): 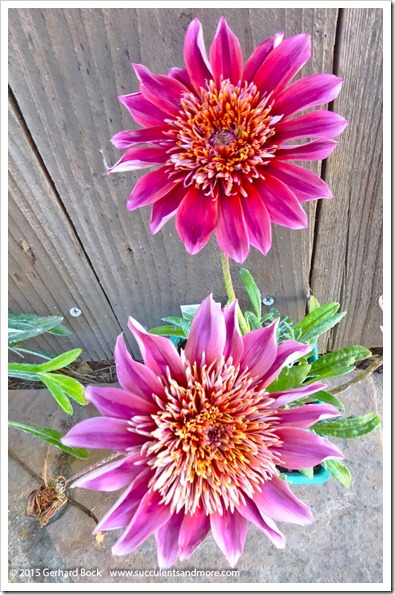 ‘Tikal’ has the circus-tent stripes of ‘Harlequin’ marigold. 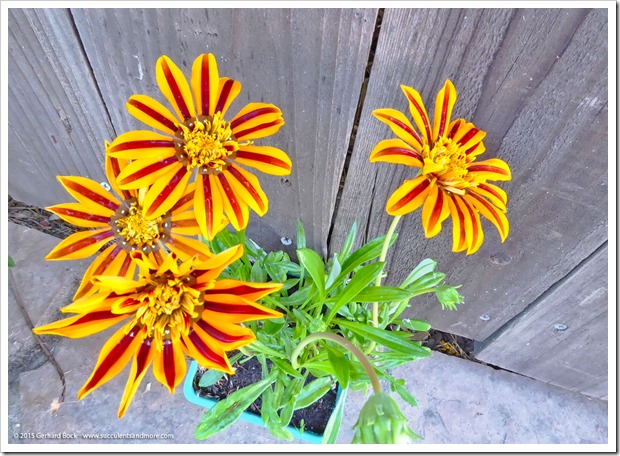 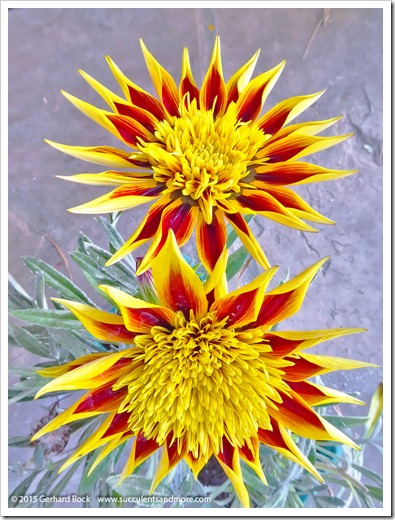 There are nine hybrids in total in the ‘Sunbathers’ series. You can see them on the website of the grower that created them, Jaldety. Thomson & Morgan and Burpee sell seeds for some cultivars so they appear to fertile. I will try to collect seeds in the fall; for now I will keep my plants deadheaded to encourage more flowers. Having seeds on hand will be a good insurance policy because gazanias aren’t very hardy and don’t reliably overwinter here.

Gazanias are fantastic companion plants to succulents. In my garden, they get watered once a week via drip irrigation once established (two to three months after planting). That’s the same watering regimen I use for everything else.

The two ‘Otomi’ I bought went in the planting strip outside the front yard fence near the Arctotis ‘Wine’. The others I added to the newest succulent in the front yard (update to follow soon). I appreciate pops of color in the dead of summer, and these gazanias are sure to deliver.