My day began with a visit to the University of British Columbia (UBC) Botanical Garden. I got there right at 9:30am when the garden opens and for a few minutes I had fairly even lighting. It didn’t take long for the clouds to dissipate, though. Before I knew it, I had to contend with the harsh light that makes photography challenging. 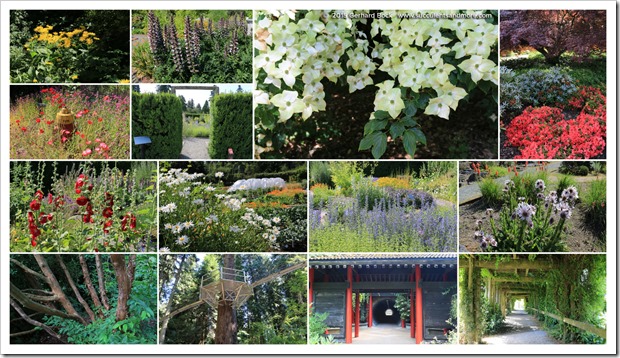 The UBC Botanical Garden is quite large—78 acres (32 hectares) in total. It is divided into two sections (north and south), separated by a tunnel under Marine Drive. The south section, where the entrance and parking lot are, is occupied by the David C. Lam Asian Garden. The north section consists of a number of smaller gardens, including the Alpine Garden, Food Garden, Physic Garden, Arbor, etc.

One of the biggest attraction, the Greenheart Canopy Walk in the Asian Garden, is a series of suspension bridges 50 feet above the forest floor. We’ll do that tomorrow morning so look for photos in my next posts.

At 34 acres, the David C. Lam Asian Garden is the largest garden in the UBCBG, and it’s where I spent most of my time this morning. It’s a second-growth coastal forest underplanted with trees, shrubs, vines and perennials from Asia. It’s a peaceful and quiet space, and I had it virtually all to myself. 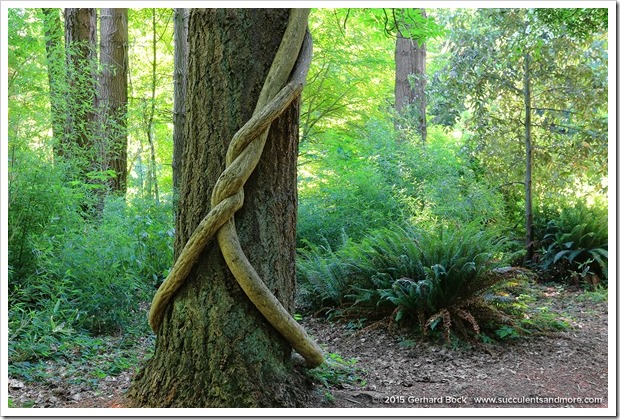 My favorite area, though, was the Physic Garden in the north section. Modeled after a classic physic garden from the 1600s and 1700s, it is enclosed by a yew hedge (designed to keep out “the ignorant”) and features twelve concentric beds featuring plants with medicinal properties. In the physic gardens of yore, such as the famous Chelsea Physic Garden in London, many of the plants would have been poisonous, but I’m not sure that’s common practice in public gardens any longer.

Physic Garden at the UBC Botanical Garden; many plants were in glorious bloom

While technically part of the UBCBG, the Nitobe Memorial Garden is in a separate location from the main botanical garden. It’s considered to be one of the most authentic Japanese gardens outside of Japan. I was going to walk over from our apartment on the UBC campus later in the afternoon but I forgot that it closes at 5:00pm, even in the summer. (In contrast, the VanDusen Botanical Garden I visited yesterday stays open until 8:30pm in June, July and August.) So the three or four photos I took on my cell phone during our UBC campus tour (see below) is all I have.

In the early afternoon, we took an official tour of the University of British Columbia campus. My daughter is interested in transferring here in a few years, and we wanted to see what the campus is like. UBC is consistently ranked as one of the top 40 universities in the world and the campus reflects that. It’s huge (993 acres, 400 hectares) but surprisingly easy to navigate. Located on Point Grey Peninsula, it’s surrounded by forest on three sides and ocean on the fourth. Its even has its own beach.

I snapped a few photos on my cell phone during the two-hour walking tour and gave them the Instagram treatment. These are random impressions of what caught my eye rather than true-to-life photos of the campus buildings (many of them in the Brutalist style). To see those, check out UBC’s official Flickr album. 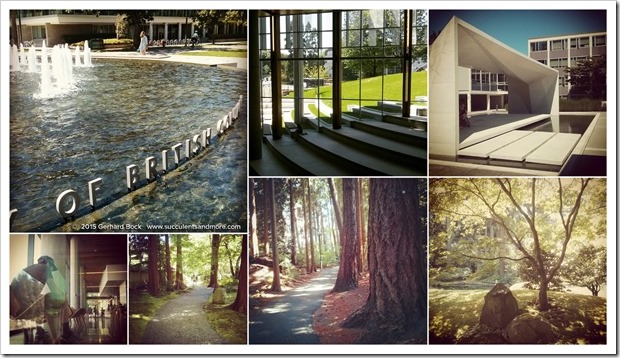 UBC campus, including a few from the Nitobe Japanese Memorial Garden (we were allowed to take a quick peek without having to pay admission)

In the evening we headed downtown to celebrate our last evening in Vancouver. We had dinner in the historic Gastown district, Vancouver’s oldest neighborhood. Its distinctive architecture, and the many trees planted along the streets, are remarkable. I realized that this is how our visit to Vancouver should have started: with a leisurely walk instead of trying to see the city by car. 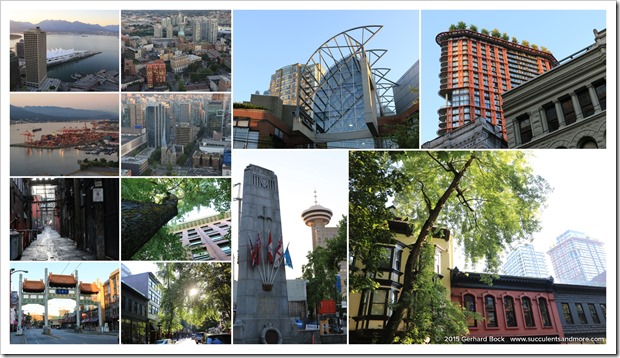 Vancouver has Canada’s largest Chinatown. Unfortunately, it’s declined to the point where we didn’t feel comfortable walking the streets in the evening. I quickly snapped a photo of the Millennium Gate on Pender Street (see lower left in the collage above) and then moved on.

A block or two from the Millennium Gate I spotted strange activity at the far end of a narrow alley. Entrance to the alley was blocked by two policemen but they acted relaxed, almost bored. So this definitely wasn’t a crime scene. 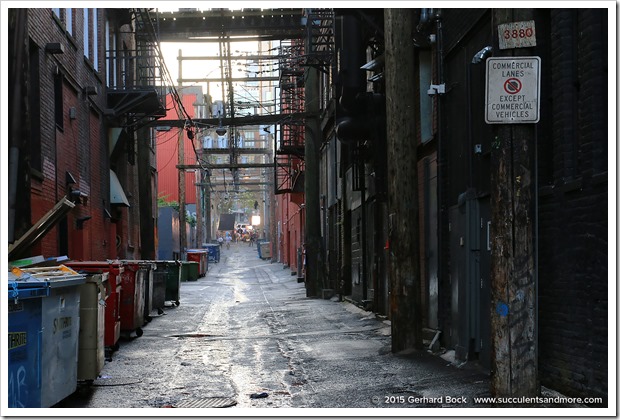 I crossed the street and asked one of the policeman what was going on. It turned out they were filming a scene for the upcoming X-Files reboot! As a huge fan of the original series, I naturally wanted to get closer. The policeman said we should walk around the block and check out the action at the other end of this alley. There the production crew was busy setting up giant lights and reflectors but I didn’t see Dana Scully or Fox Mulder (Gillian Anderson and David Duchovny), the two main characters of the series. 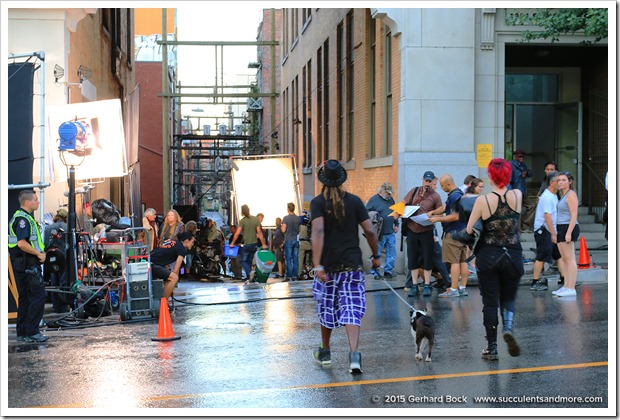 Oddly enough, the homeless camp in the park across the street was part of the shoot. I don’t know if the extras were really homeless or just pretending to be, but it looked very realistic. 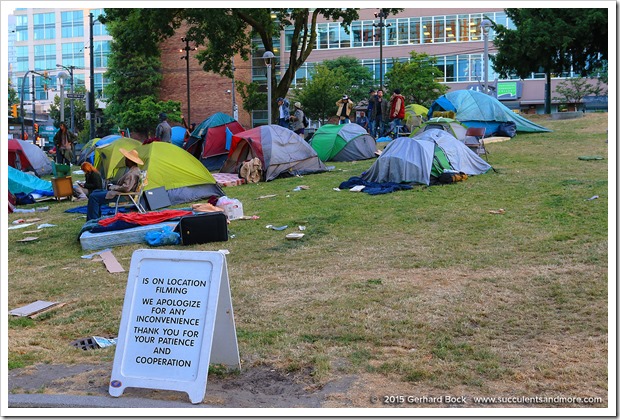 To end our evening on a high (literally), we rode the glass elevator to the Vancouver Lookout on top of the Harbour Centre complex. From there you have a stunning 360° view of Vancouver and beyond. As you can see from the photos below, this is a fantastic vantage point—definitely the best that is accessible to the public. 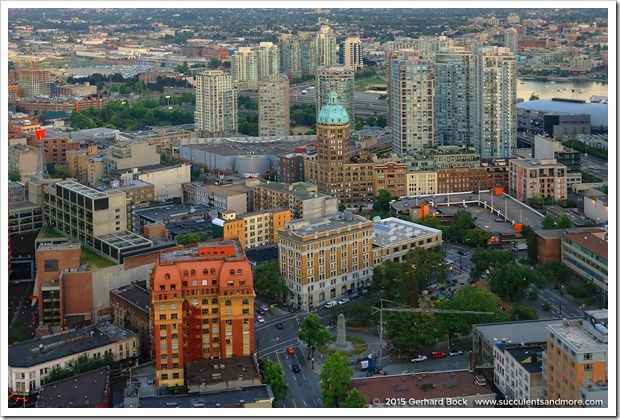 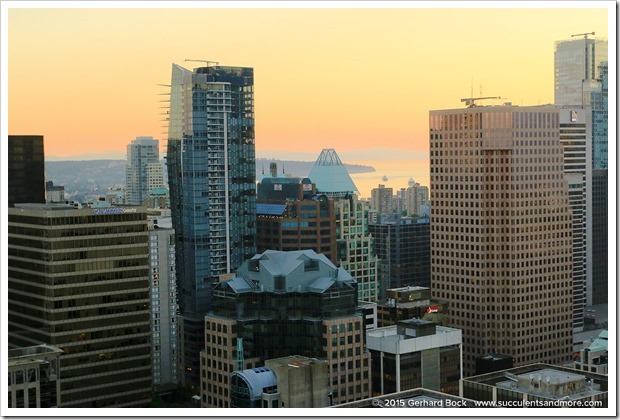 Check out the balconies on the top floors of the highrise on the left—I saw people out there!

Now that our stay in Vancouver is almost up, I will admit that I’ve warmed up to the city. After walking through the Gastown district and seeing Vancouver at sundown from a height of 550 ft., I realized just how magnificent its setting is. Yes, it’s a large metropolis with the throngs of people and cars that come with it. But leaving all that aside, Vancouver truly is a beautiful city.