We’ve been in Vancouver, British Columbia for two days now, and it hasn’t been love at first sight. True, its location is stunning, as you can see below.

But the city is very large, very crowded, and very noisy. In addition, everybody seems to always be doing something: running, bicycling, speed-walking. It’s as if life is happening at a faster pace here than elsewhere. More than once I was reminded of an old documentary called Koyaanisqatsi. Its time-lapse and fast-motion sequences of modern life left quite an impression on me when I first saw in in the mid-80s. 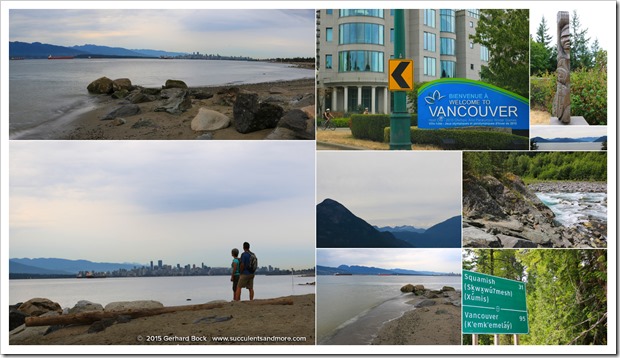 I will say that on the morning of day 3, I’m getting acclimated to Vancouver, and that we’ve progressed from frenemies to acquaintances. Who knows, by the time we leave tomorrow, we may have struck up a friendship.

Yesterday we drove to the resort town of Whistler, about two hours north of Vancouver. I’d seen photos of towering mountain peaks and pristine alpine lakes. All of that may be there somewhere, but what we encountered was an extension of the traffic and crowdedness of Vancouver. Whistler Village is dominated by massive upscale lodges completely out of scale given the environment; expensive shops; and stressed-out drivers looking for parking. I felt so uncomfortable there that we left as soon as we arrived.

The most interesting thing of the whole drive to Whistler were the bilingual road signs in English and Squamish. Squamish looks to be a highly complicated language. Just take a look at the sign in the collage above (lower right). The town of Squamish is written as “Sḵwx̱wú7mesh.” Click here to hear it pronounced by a native speaker.

After our less-than-satisfying outing to Whistler I dropped my family off at our apartment on the campus of the University of British Columbia and headed to nearby VanDusen Botanical Garden to find some peace and solitude. In his 2014 book The Pacific Northwest Garden Tour: The 60 Best Gardens to Visit in Oregon, Washington, and British Columbia, Donald Olson calls VanDusen not only “one of the great gardens of the Pacific Northwest” (and the one garden to visit in Vancouver if you only have time for one), but “one of the great gardens of the world.”

I haven’t been to enough gardens internationally to judge the merit of that claim, but I thoroughly enjoyed my visit to VanDusen for several reasons: There were very few people there, and shortly after I arrived it started to drizzle. Feeling raindrops on my skin felt indescribably good. It was warm, around 80°F, and quite humid, but I didn’t mind. 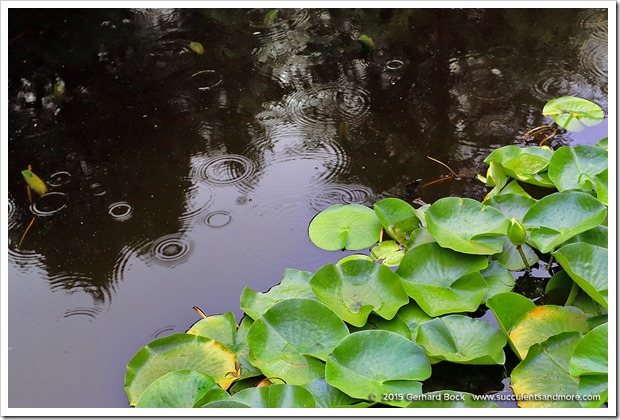 VanDusen is a large garden. I spend a couple of hours walking and I still didn’t see everything. It wasn’t until later that I read it’s spread out over 55 acres (22 hectares).

Living in California and typically drawn to sun-drenched Southern California and Arizona, I’m used to xeric gardens that are wide open. In contrast, VanDusen has many shady areas with dense stands of trees, alternating with expanses of grass and ponds (some of them called “lakes”). Clearly there is no shortage of water here in British Columbia. It took me a while to get used to such an abundance of water-loving greenery.

I took many photos, more than enough for a dedicated post. Look forward to a cornucopia of large-leafed plants! 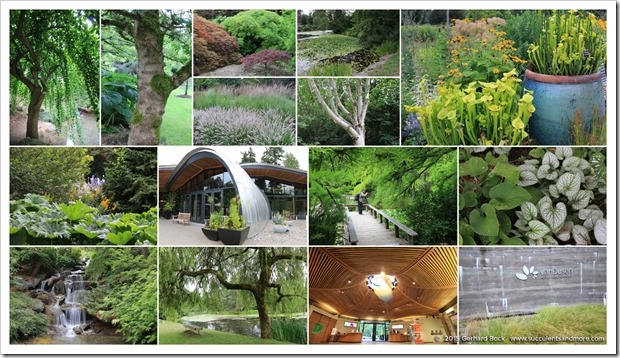 I should also mention the Visitor Centre. Opened in 2011 and one of only five buildings worldwide that have received LEED Platinum certification (LEED’s highest energy-efficiency and sustainability rating), it is a fluid combination of wood, glass, concrete and metal. Seen from the air, it apparently resembles an orchid. I wish I’d had more time to explore it, but I’d already stayed longer than I thought I would and I had to meet my family for dinner.