‘Bonsai Blue’ jacaranda, where have you been all my life?

I’ve made no secret of my love for the blue jacaranda (Jacaranda mimosifolia). This South American native may be a messy tree—really messy, not politely so like our ‘Desert Museum’ palo verde—but few trees can hold a candle to it for sheer beauty when in bloom. And even when it isn’t, its fern-like foliage is attractive year round. 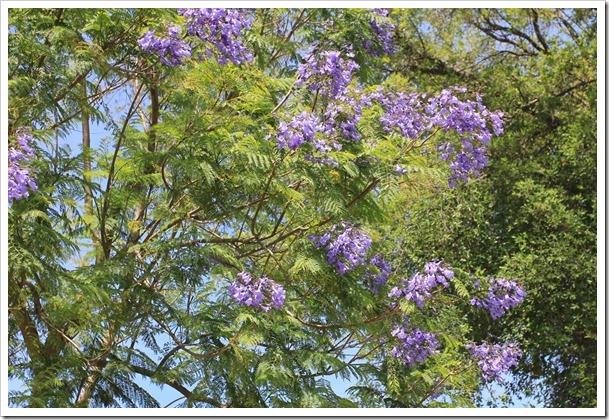 Quite a few cities in warmer climates turn a sea of blue when Jacaranda mimosifolia blooms in the late spring. This includes Pretoria, South Africa; Sydney, Australia; as well as Los Angeles and other places in Southern California. Even here in Davis we have a few jacarandas although my favorite tree on 8th Street was cut down last year (no idea why; it was the only thing pretty at an unattractive older apartment complex).

When we removed the truly messy (there’s that word again!) ornamental purple plum next to the driveway in September 2013, I briefly toyed with the idea of planting a Jacaranda mimosifolia but ultimately decided in favor a ‘Desert Museum’ palo verde—the very tree that’s been blooming its head off since late April. My concerns were the aforementioned messiness as well as its frost sensitivity (around 25°F). The latter isn’t a problem in a normal winter, but I don’t want to lose something as substantial as a tree in one of those really cold winters we seem to get every 15-20 years. (In December 1990 temperatures dropped into the high teens, which killed a lot of trees, especially citrus.)

I thought I’d gotten my desire to have a Jacaranda mimosifolia out of my system until I read this post on Kris Peterson’s blog Late the Garden Party. In it, Kris briefly mentions a new dwarf jacaranda by Monrovia called ‘Bonsai Blue’. I immediately went to work and found a nursery that had it in stock. Orchard Nursery  in Lafayette, CA is only 10 minutes from Walnut Creek, and I picked up my ‘Bonsai Blue’ last Tuesday when I met friends from Portland at the Ruth Bancroft Garden.

Yes, it was expensive, even for a large plant in a #5 container, but at least it was cheaper than the specimen Kris Peterson saw at Roger’s Garden in Orange County in Southern California.

Orchard Nursery had four or five Jacaranda ‘Bonsai Blue’ and I picked what I thought was the largest and fullest: 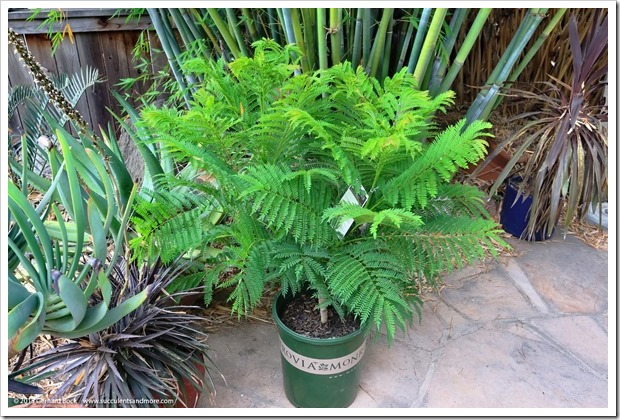 Look at the lush green color and the finely dissected foliage. Perfection! 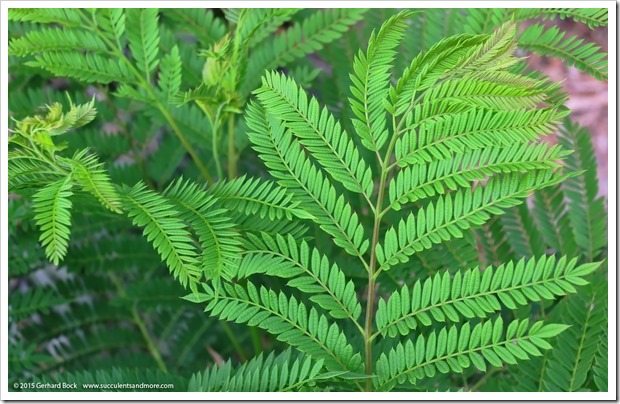 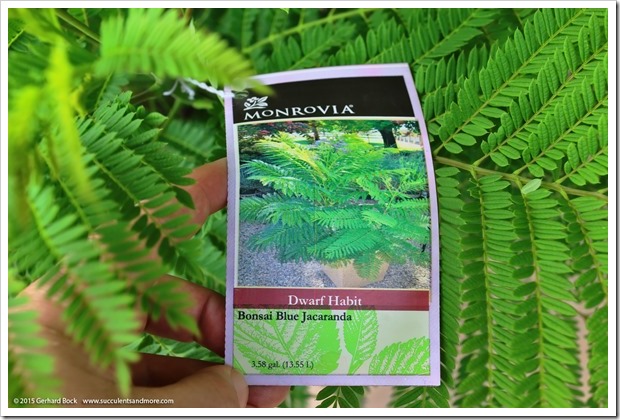 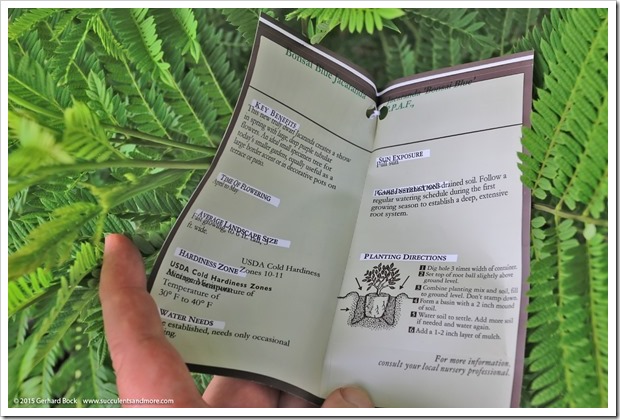 I had been unhappy with the performance of the smokebush (Cotinus coggygria ‘Royal Purple’) on our backyard patio. Instead of the deep purple color Cotinus coggygria shows on the coast, we get a difficult-to-describe sickly green (see photo below). Nobody seems to know if it’s our inland heat, less water, or what. Even before I knew Jacaranda ‘Bonsai Blue’ existed, I had decided I was going to replace the smokebush with something else. 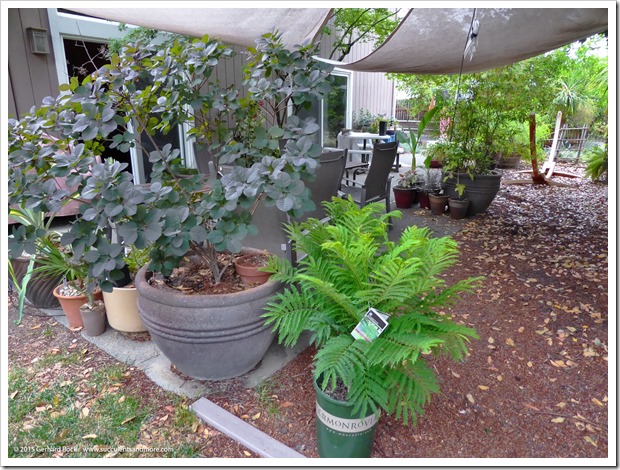 As happens so often, serendipity did its thing and made the decision for me. The smokebush will go to my mother-in-law’s garden in Mount Shasta, in the mountains of far northern California where it’s cooler, and Jacaranda ‘Bonsai Blue’ will take its place.

And that’s exactly what happened. Here is the end result. 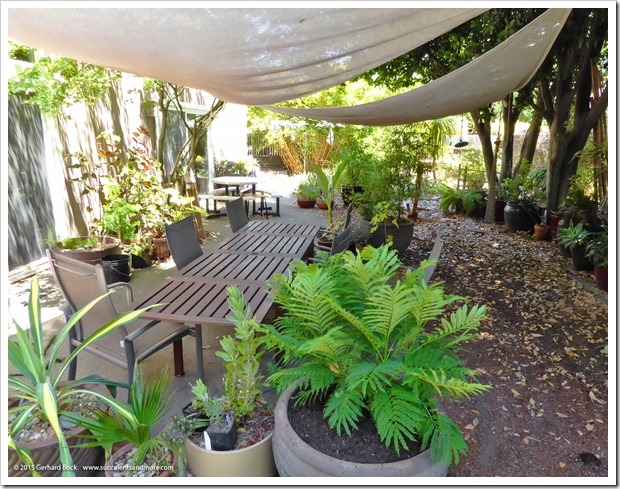 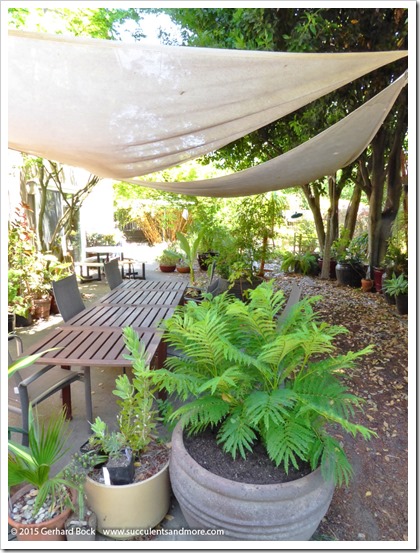 Jacaranda ‘Bonsai Blue’ looks fantastic in this very large concrete planter. Even if it never bloomed, I’d be happy to have such beautiful foliage next to the backyard dining table.

Postscript: The Jacaranda ‘Bonsai Blue’ marketed by Monrovia is a true dwarf developed by Kiyoshi Sakai in Japan. It tops out at 6 ft. in height by 5 ft. in width, as compared to a height of 40+ ft. for a regular Jacaranda mimosifolia. Cold tolerance is the same at 25°F (zone 9b). The first 800 specimens sold by Monrovia were contract-grown in Israel by Hochberg Export Ornamental Plants. Availability for 2015 is limited, but hopefully it will be sold in more nurseries (and at a lower price) in the years to come.