Time for a quick update on our new front-yard desert garden. We planted it on March 15 and 16 when temperatures were in the mid-80s. This must have been quite a shock to many of the plants which had been used to milder temperatures, both at the nursery and in the staging area at our house (aka our driveway). This was followed by several weeks of rain—mostly intermittent, but for a few days fairly steady—and then two more weeks of sunny spring weather with daytime highs in the mid to high 70s. 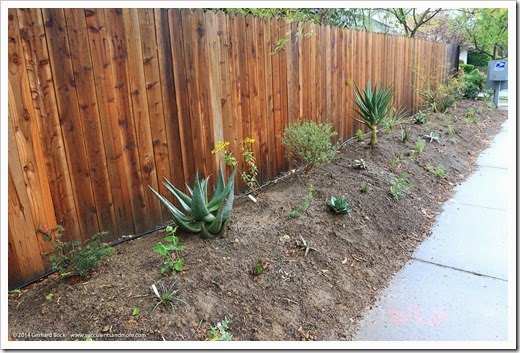 In general, the plants have fared well. They seem to be actively growing, and some have started to flower. 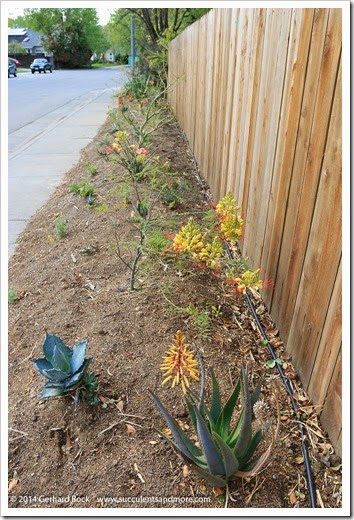 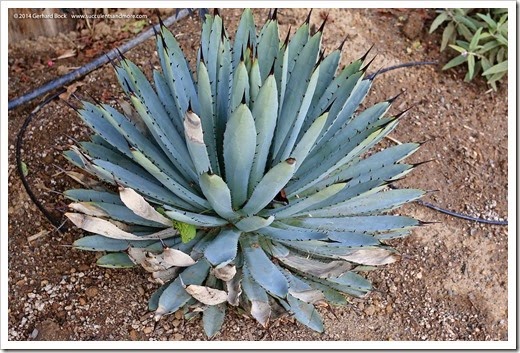 Agave macroacantha, purchased bare-root from the UC Botanical Garden in Berkeley, didn’t re-root fast enough. Unfortunately, quite a few leaves lower down have dried up. I will remove them to preserve the symmetry of the rosette as much as possible. Otherwise the plant looks healthy. 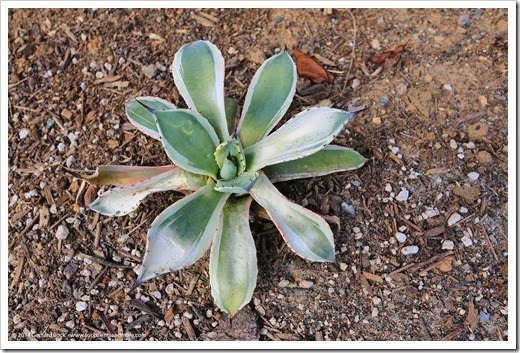 Agave applanata ‘Cream Spike’ has a bunch of fried leaves. I’d protected it with shade cloth for a while but clearly not long enough. The damage is cosmetic and the plant will grow out of it, but for now it sure is ugly. 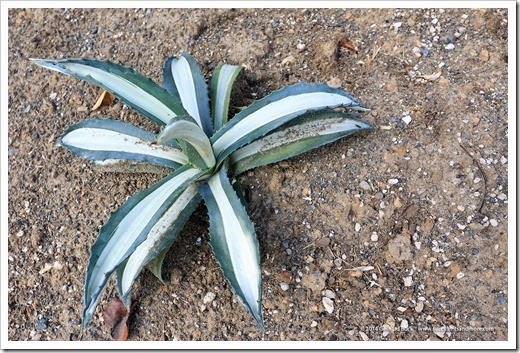 Agave americana ‘Mediopicta Alba’ only has one partially fried leaf. You’d think it would be just as susceptible to sun damage as ‘Cream Spike’ above but it appears to be more tolerant. 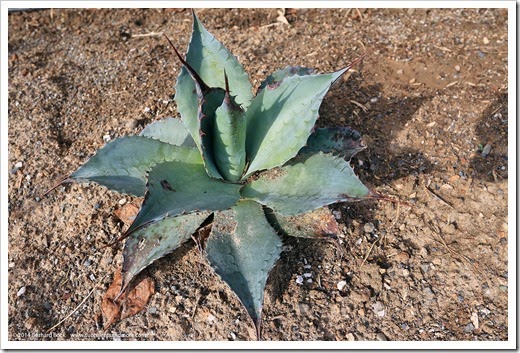 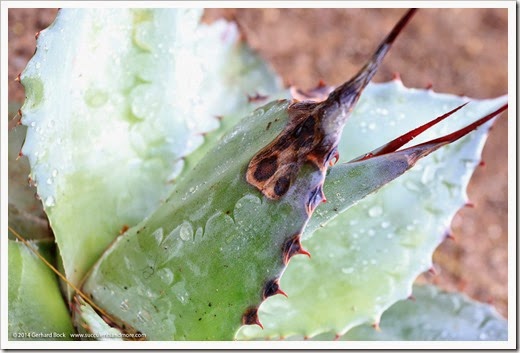 …there are some worrying signs… 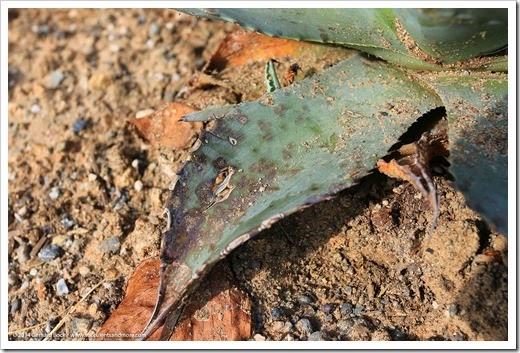 …of what might be fungal damage from the recent rains. Or is it simply sunburn? The round brown spots are a cause for concern. Does anybody what they could be? 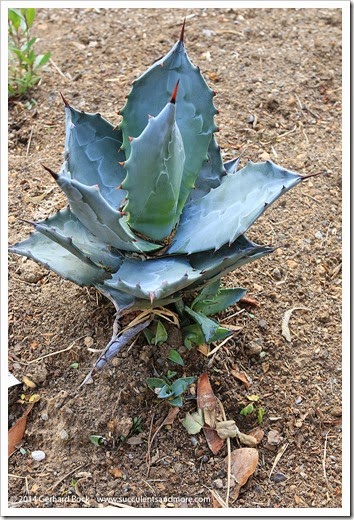 Agave colorata, on the other hand, looks perfectly fine. It has a dozen pups. I’ll remove most of them when they’re a little bigger and plant them separately. 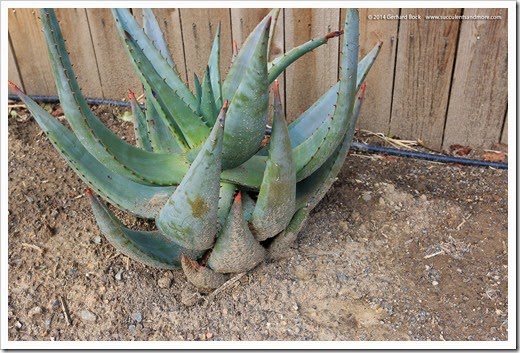 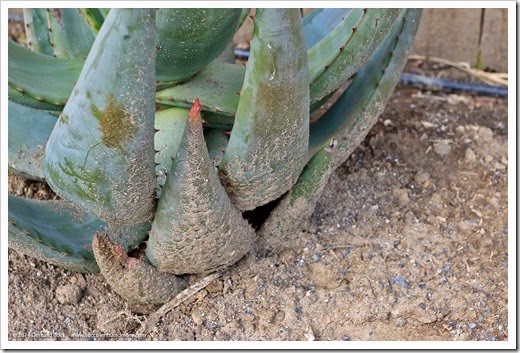 …except from the dirt on the underside. You can see how hard it rained at times! And yet, California is still only at 50% of normal rainfall. 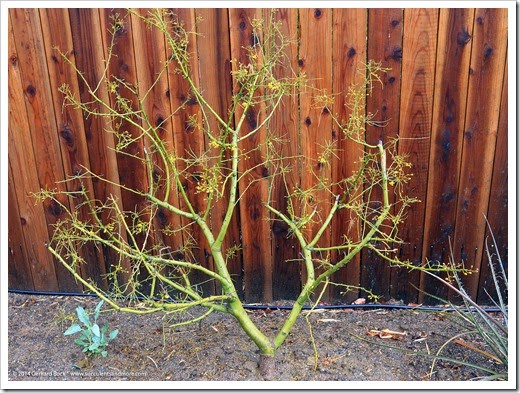 ‘Sonoran Emerald’ palo verde (Parkinsonia ‘Sonoran Emerald’) definitely suffered transplant shock. It lost all its leaves and stopped blooming. Now the leaves are growing back. The flower buds are still there; I wonder if they’ll start opening? 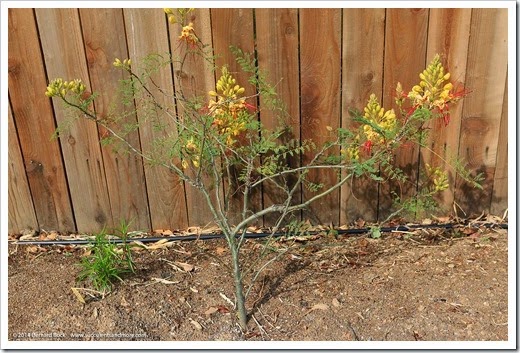 Yellow bird-of-paradise (Caesalpinia gilliesii), on the other hand, didn’t miss a beat… 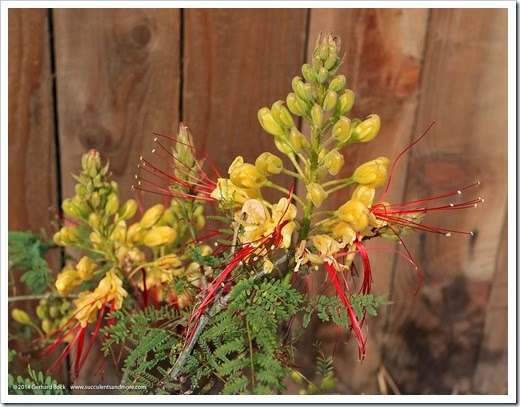 …and is merrily flowering. Look at the enormously long stamens! 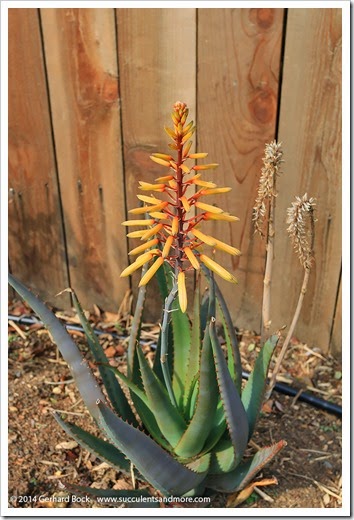 Also flowering, Aloe ‘Moonglow’. The flowers aren’t quite as yellow as I’d hoped, but the color is very pretty. 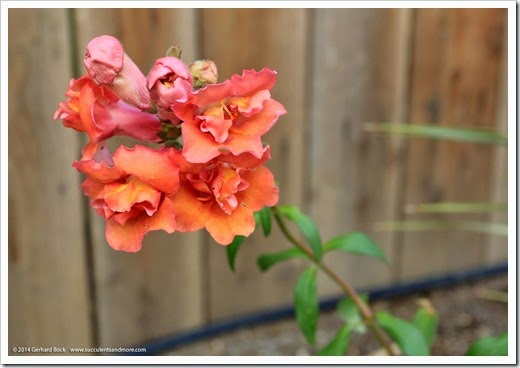 This globe mallow hybrid from England, Sphaeralcea ‘Newleaze Coral’, has been blooming for a few weeks now. I don’t know what to think of it. I like the color a lot, but the flowers themselves are too frilly for my taste. I’ll give myself a while to get used to them, but I’m not sure this one fits my overall scheme.