One of the things I look forward to the most each spring is seeing Echium wildpretii in bloom. This Canary Island native nicknamed “tower of jewels” has become very popular in Davis, and at this time of year you can spot the towering flower cones all over town.

Last year I tried a hybrid called ‘Mr Happy’ (Echium wildpretii × Echium pininana). It looked quite similar I didn’t find the blue flowers as attractive as as the magenta ones of Echium wildpretii.

This year I have two towers of jewels that are in bloom. Both were seedlings from my 2011 plant that had sprouted in a pot with a Yucca rostrata. The “extrication” described in this post was successful, as you can see below.

It’s interesting to note that while Echium wildpretii is a biennial—i..e. it flowers in its second year, sets seeds and then dies—my two plants took three years to bloom. 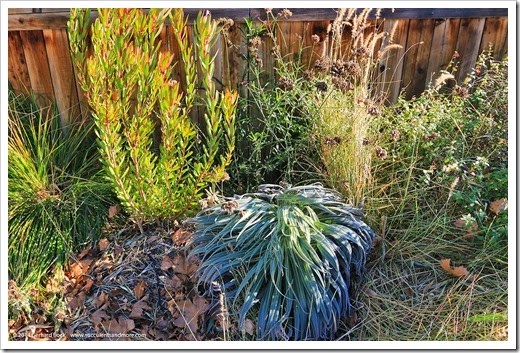 December 12, 2013, looking not so hot after a week-long cold snap. It quickly recovered. 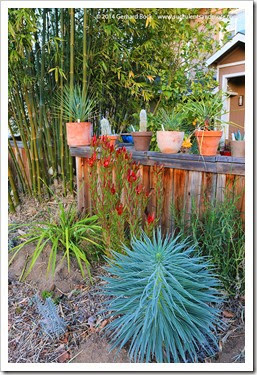 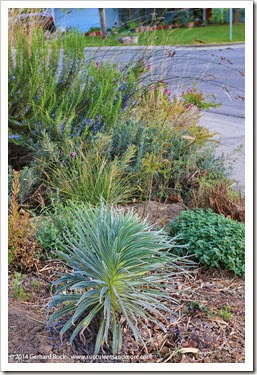 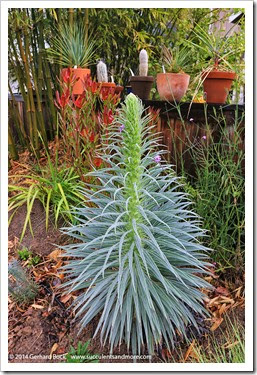 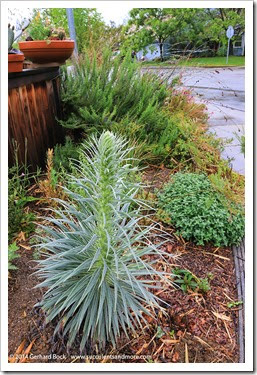 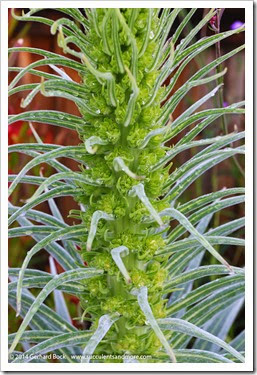 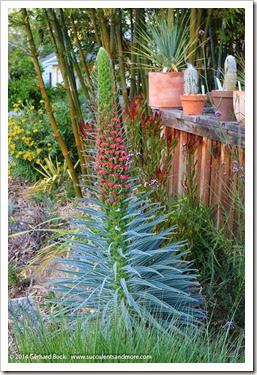 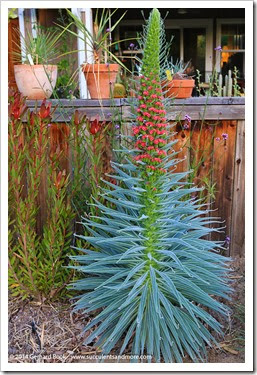 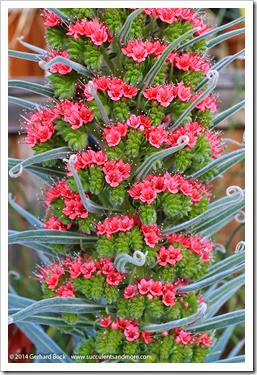 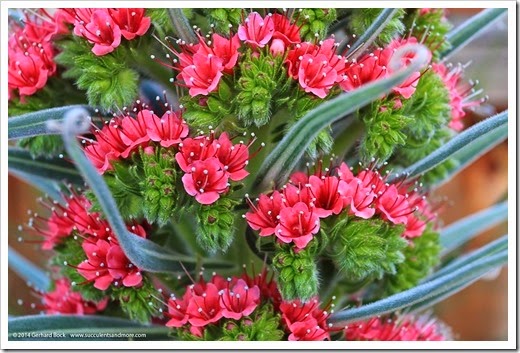 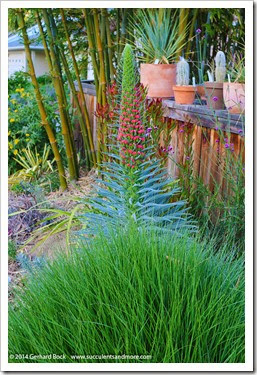 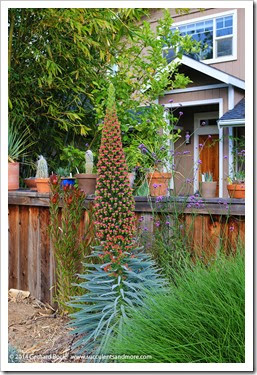 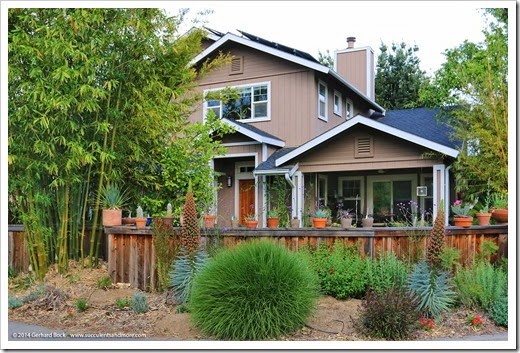 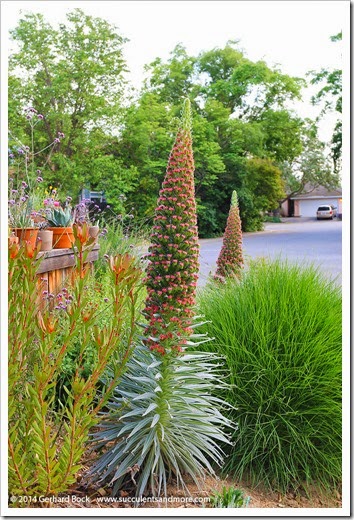 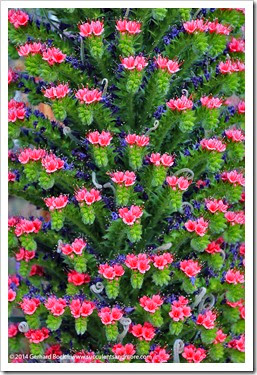 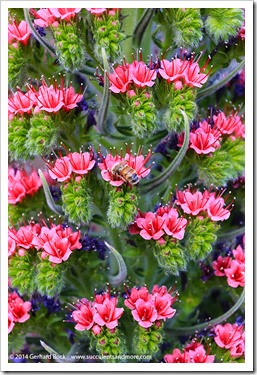 April 21, 2014
Here you can see how the old petals turn dark blue so it looks the plant has two-tone flowers.

Yesterday I took my mother-in-law to the campus of UC Davis to show her a tower of jewels I’d seen in front of the Sciences Lab Building back in February when I photographed the aloes in bloom. On our way there, I spotted these Echium wildpretii in front of Storer Hall: 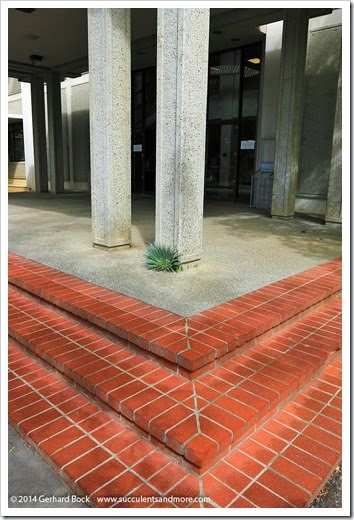 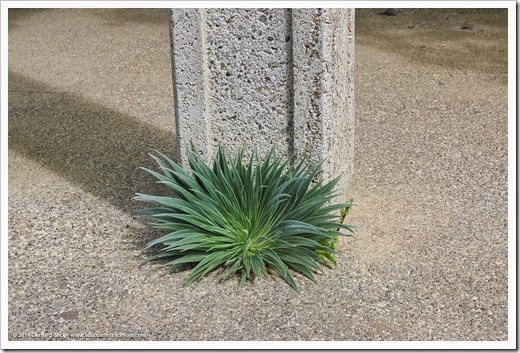 It will bloom next year if all goes well. I’ll check up on it later in the year. 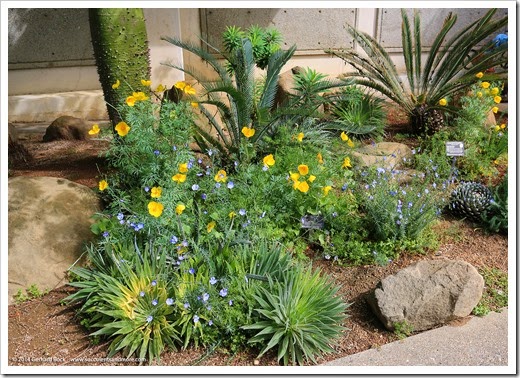 Still in front of Storer Hall, here are four Echium wildpretii in the front… 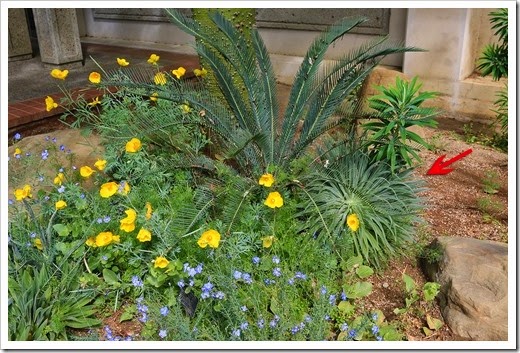 …and one in the back. This could be a stunning sight next year. I can already see four towers surrounded by these unusual yellow poppies and unidentified blue wildflowers. The cycad in the back is a Dioon edule.

The tower of jewels in front of the Sciences Lab Building did not disappoint. 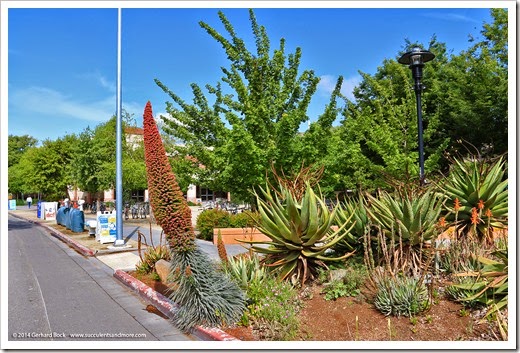 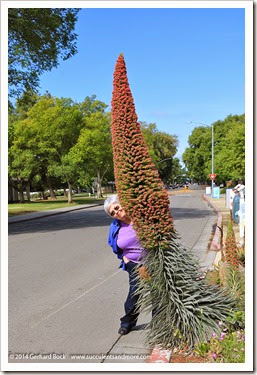 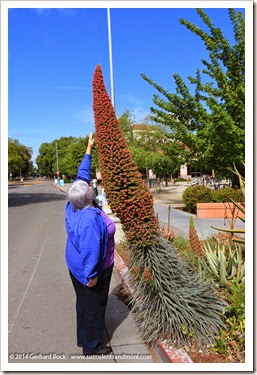 Taking a closer look, I realized that it’s actually four plants squished together. The other three towers are just 2-3 ft. tall. 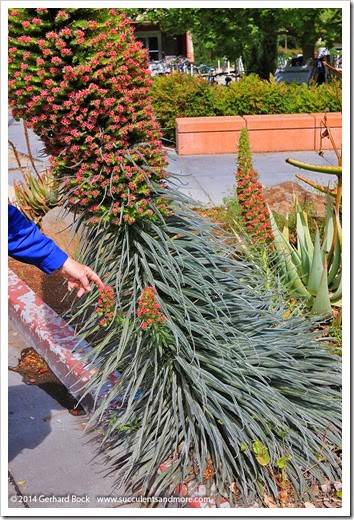 Nearby I spotted a one-year old Echium wildpretii growing next to a clump of Aloe perfoliata. Another one to check out next year when it will be of flowering age! 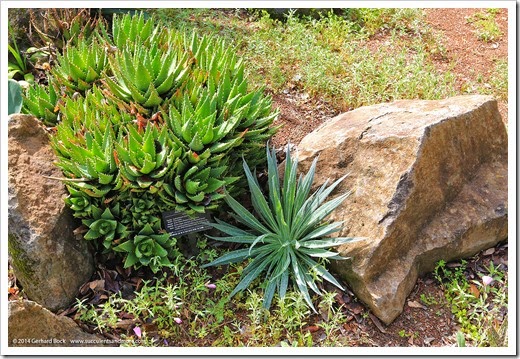 Echium wildpretii is native to the dry slopes of Mount Teide on the island of Tenerife in the Canary Islands. This biennial forms a rosette of fuzzy grayish leaves in its first year before producing a tall inflorescence (up to 10 ft. in its native habitat) densely packed with flowers in its second year. After flowering and setting seed, the plant dies, but it leaves behind thousands of seeds that scatter as the dried up “tower” falls over.

Echium wildpretii prefers a dry and sunny position and demands well-drained soil. It tolerates temperatures down to the low twenties but quickly dies below that, especially if the soil is wet for longer periods of time.