Google’s definition of the word “whimsical” applies perfectly to Anna Zakaria’s succulent creations. I had seen Anna’s work on her Facebook page and on her blog, 4 Surya Garden, and I had met her at Donna and Keith’s pottery workshop in January. Anna lives very close to the Ruth Bancroft Garden, and last Saturday, after the RBG spring plant sale, Anna had Candy “Sweetstuff’s Sassy Succulents” Suter and me over to her house for lunch. 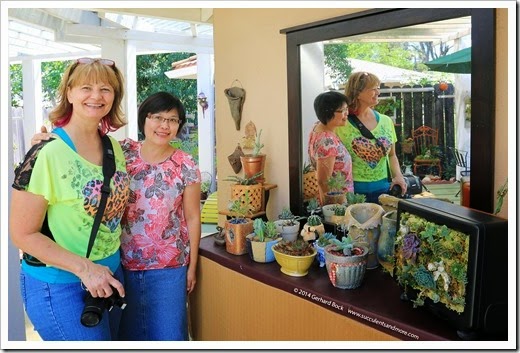 Candy Suter (left) and Anna Zakaria in her Anna’s backyard

The food and iced tea were fantastic, but I had a hard time sitting still at the patio table. All around me were containers large, small, and smaller; traditional, quirky, and downright fantastical. And most of them had succulents in them.

While many people surround themselves with potted succulents, Anna goes a big step further. Seriously, how many people do you know who have turned an old portable TV into a vertical succulent garden? 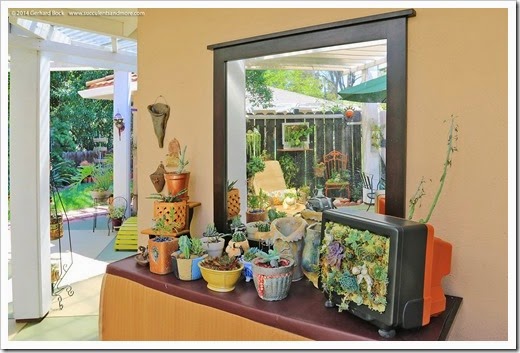 This TV sits on a sideboard on Anna’s patio, which, I should add, is furnished much like a living room might be. The entire patio is covered so it stays dry when it rains. 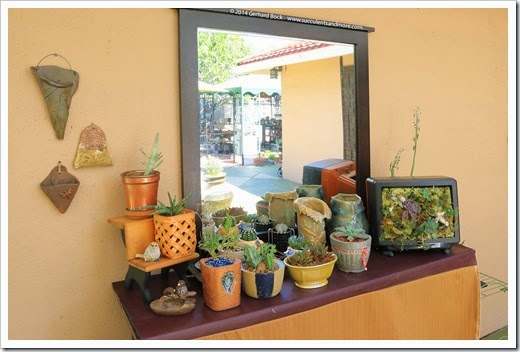 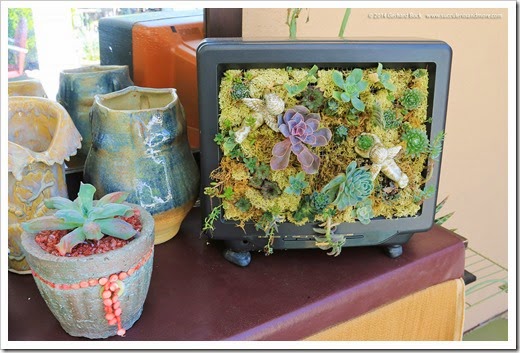 Take a look at this seating arrangement on the patio. Wouldn’t you want to sit here with a good book? Don’t miss the orange pedestal fan on the right. Yes, it, too, is planted with succulents. 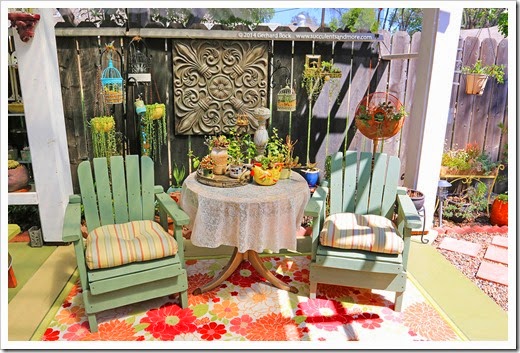 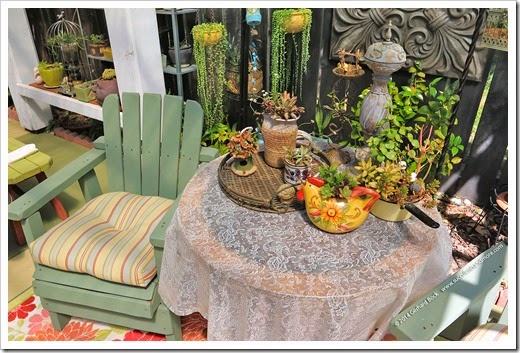 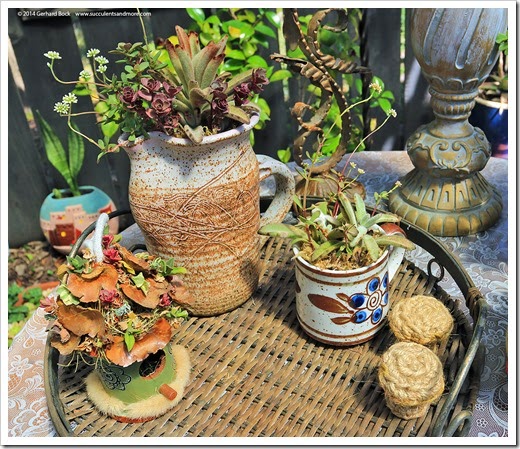 Virtually every surface is covered with small gems. The wall pockets in the next set of photos are Anna’s own creation. She made them at Donna and Keith Taylor’s workshop. 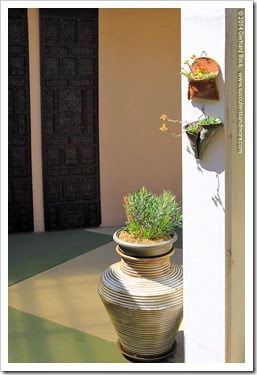 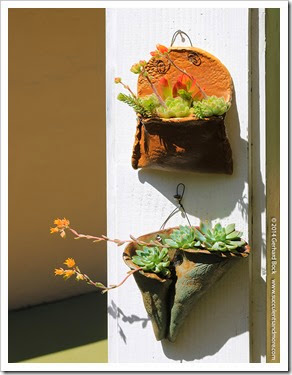 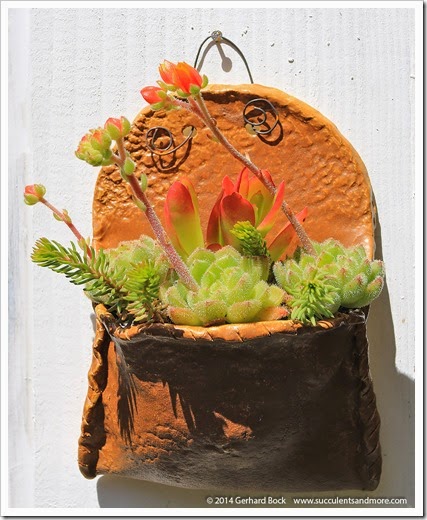 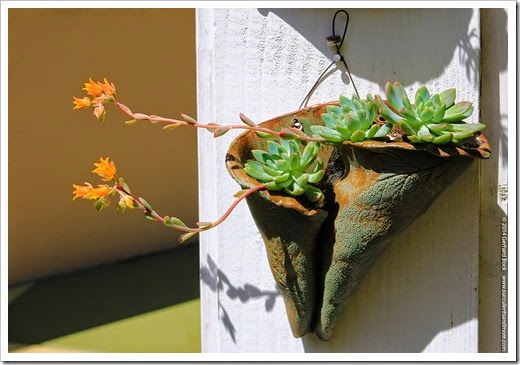 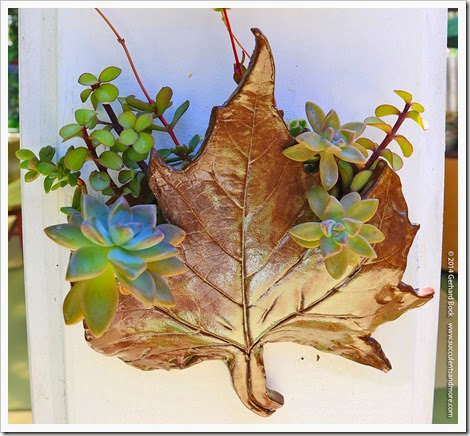 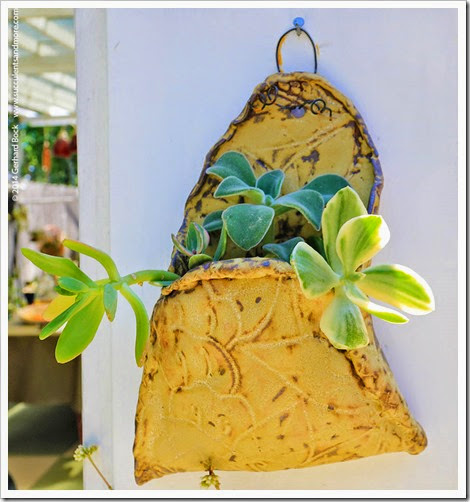 Most of us don’t even have one succulent TV, Anna has two. The second one is on a shelf attached to the backyard fence. Interested in how Anna did it? Read this post on her blog, 4 Surya Garden. 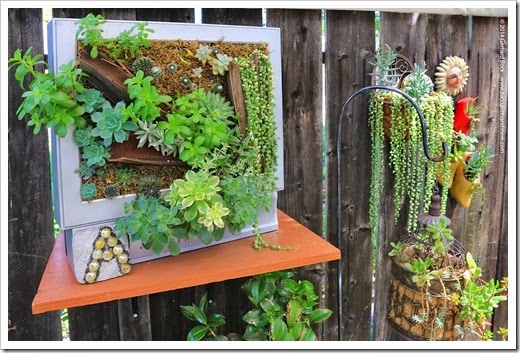 Next to the TV is a hanging basket with variegated string of pearls (Senecio rowleyanus f. variegatus), much sought-after by succulent lovers. (Candy and I were able to buy some at the RBG plant sale.) The Dutch shoes are a nod to Anna’s native country of Indonesia, which was once a Dutch colony. 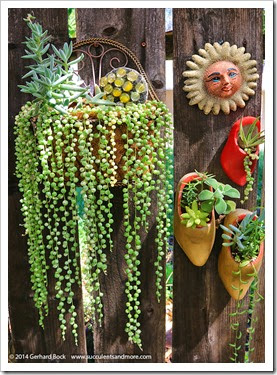 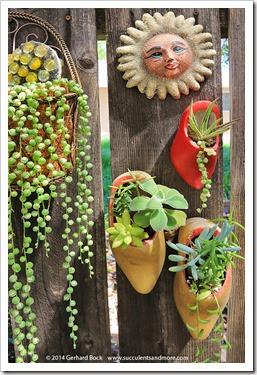 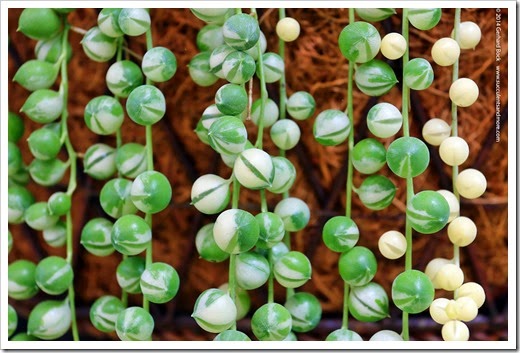 Another motif I recognized are chairs: real chairs like this one, stuffed with succulents… 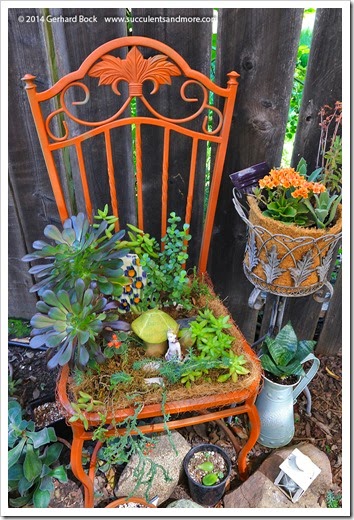 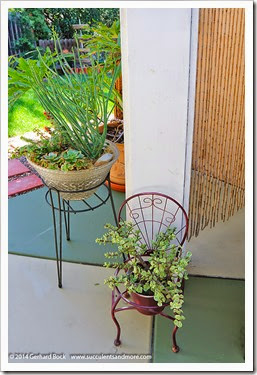 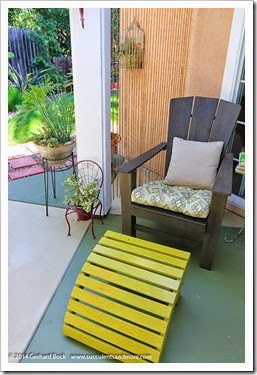 And then there are the birdhouses: 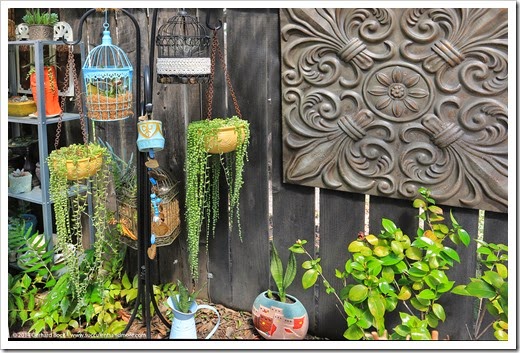 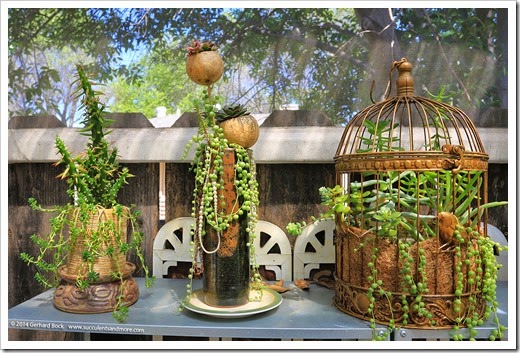 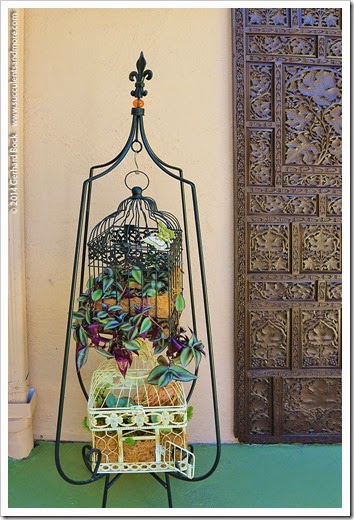 Anna’s creativity knows no bounds. Other people would get rid of an old BBQ, Anna turned it into a succulent planter. Look closely: The can of pork and beans is actually planted with a succulent called pork and beans (Sedum rubrotinctum)! 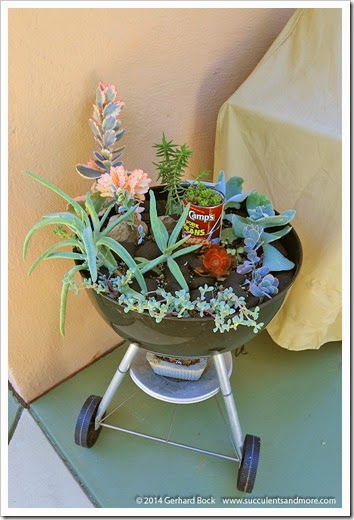 Using every square inch of space, Anna mounted a shelf below this window (I believe it’s the kitchen window) to display even more succulent creations. 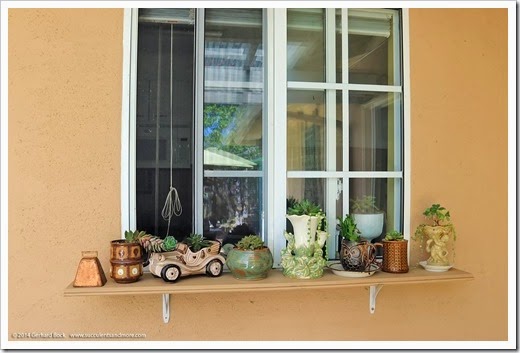 One of my personal favorites was this one: 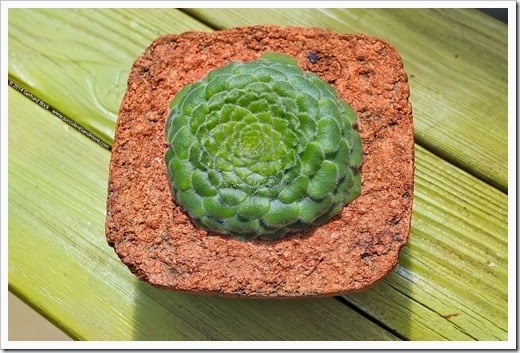 It’s an Aeonium tabuliforme planted in a hypertufa pot made by Anna and painted a terracotta red. It’s perfect in its simplicity.

To see more of Anna’s work, go to to her Facebook page. In February, Anna also started a blog called 4 Surya Garden. It showcases her upcycling projects, including tips on how to make and decorate hypertufa pots.

Anna occasionally sells her potted arrangements at arts and crafts fairs in Northern California. Contact her via her Facebook page for more information.

I greatly admire Anna’s unbridled creativity—I wouldn’t be able to think of 1/10 of the things she does—and I can’t wait to see what she comes up with next!