The pittosporum hedge is gone

Yesterday was the big day: The guys at Alliance Tree Service took out at the hedge along the street. The result is both startling and exciting: 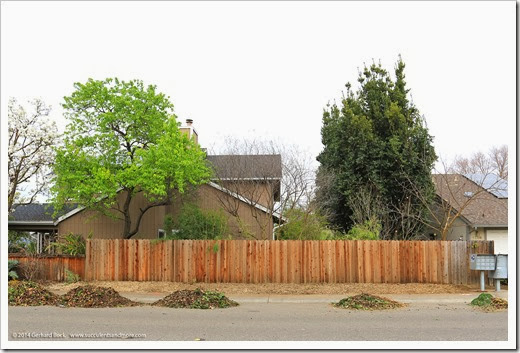 This is what it had looked like just hours before:

All of this is part of a major overhaul of this side of our property. Instead of the hedge—too large for this spot, too difficult and time-consuming to maintain, and plain ugly—there will be a palo verde tree, succulents and flowering companion plants. All of them will be low maintenance and, above all, use little water. I cannot emphasize enough how important this is, considering that even with the recent rains we’re still only at 30% of normal for the current water year.

Let’s take a look at how things unfolded yesterday. 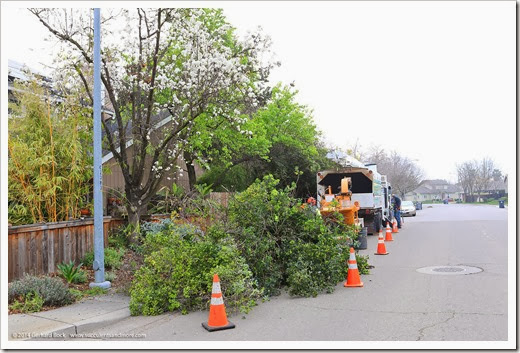 It didn’t take the crew of four long… 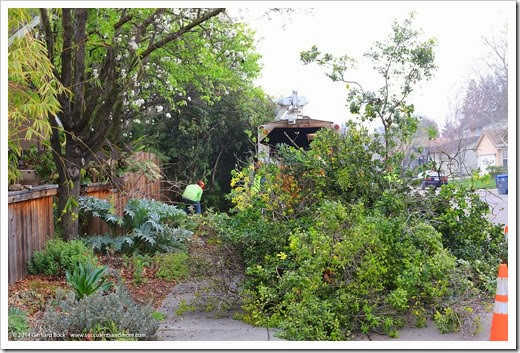 …to chop down the nine Pittosporum tobira shrubs 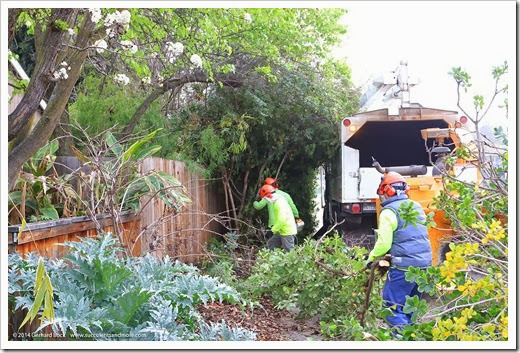 …and feed them into the chipper 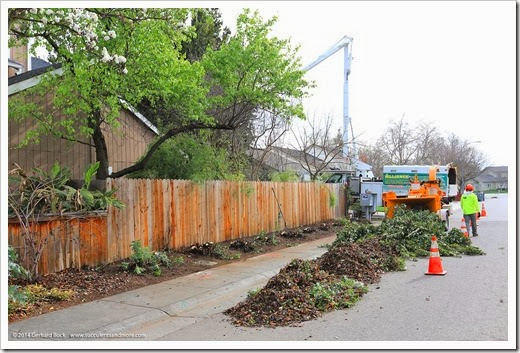 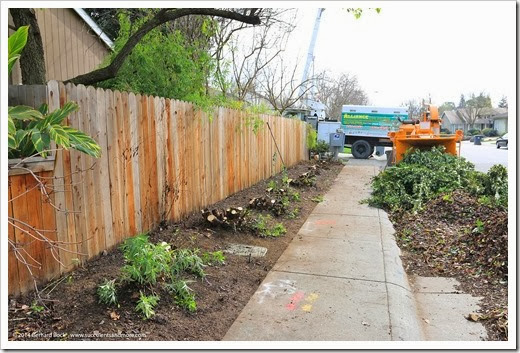 Nothing but the stumps left 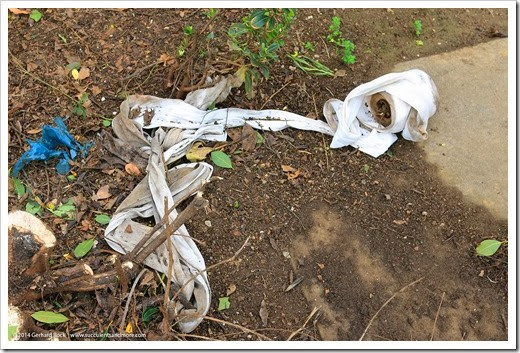 In addition to beer cans and plastic bags, the crew also made this strange find: I think it’s a roll of bandage material. I’d love to know how it ended up in our hedge, right next to the mailboxes. There’s got to be a good story there! 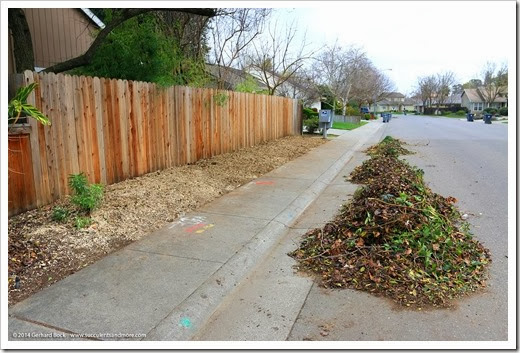 In the afternoon, the stumps were ground out… 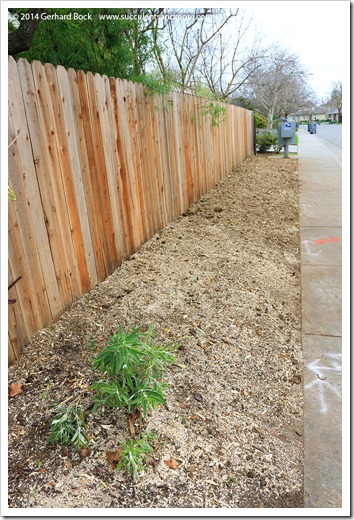 …leaving nothing but fine wood chip on the far side of this variegated Mexican bush sage (Salvia leucantha ‘Variegata’). The roots were up 16 inches deep, and some were over 4 inches in diameter. I don’t think I could have done this work myself, with just a crowbar and saw. 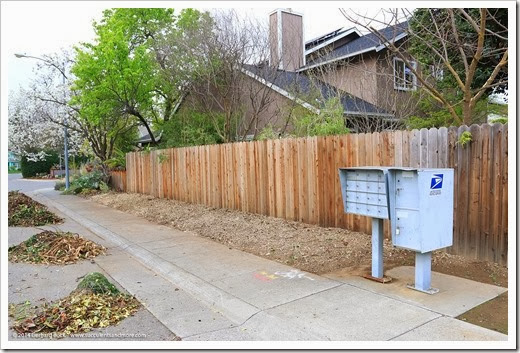 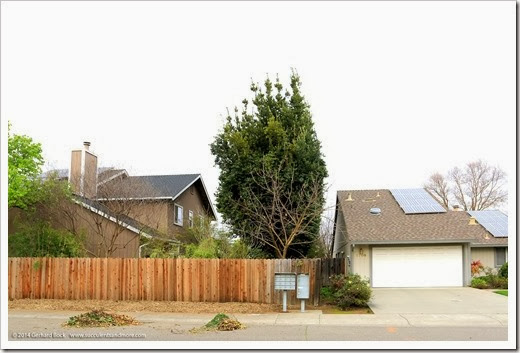 Also check out the row of bay trees in the photo above. They were trimmed back from both our house and our neighbor’s house. Alliance did a spectacular job—these trees have never looked so good! The piles left in the street aren’t the chippings from the hedge, by the way, they’re old leaves the crew raked out from under the shrubs. For some reason, the biomass plant that takes the chippings doesn’t take old leave; they will be picked up by the City of Davis yard waste people next week.

As excited as I am about creating my new “desert garden,” my wife and I were concerned about the loss of privacy in the back yard. The hedge, a good 10 ft. tall, had shielded us from the street and the houses on the other side:

View of the hedge from the back yard

Now that the hedge is gone, this part of the back yard does feel much more exposed:

Same view after the hedge was removed

I know that there will be much privacy once the Chinese pistache, lilac and chaste tree have leafed out. In addition, the palo verde on the outside of the fence will create a lush and delicate screen. But for now the new reality will take some getting used to.

Here is another before and after comparison: 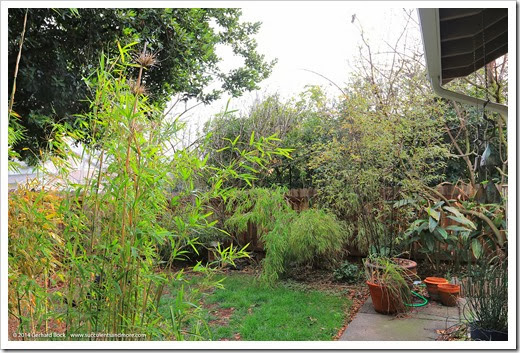 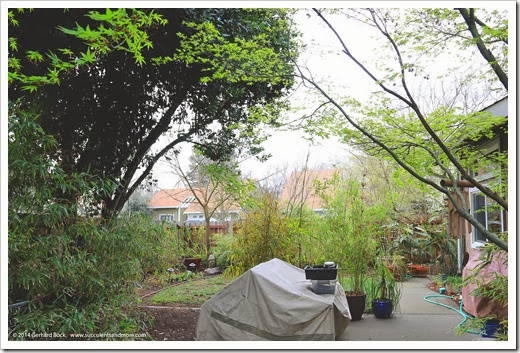 As I mentioned above, Alliance not only removed the hedge, they also trimmed our four bay trees—the dominant feature in our back yard. 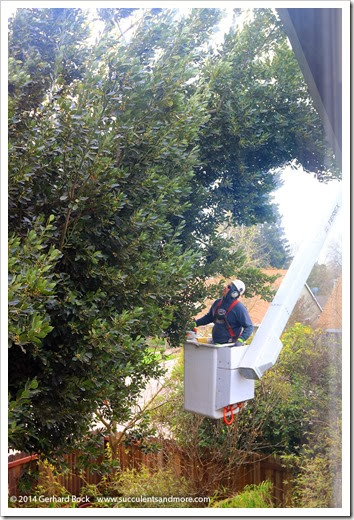 The bay trees had grown so much since their last haircut three years ago that many of the plants I’d planted in the bed you see in the next photo had died from a lack of light. Strangely enough, my Aloe marlothii has been hanging on even though it would much prefer a sunnier spot. 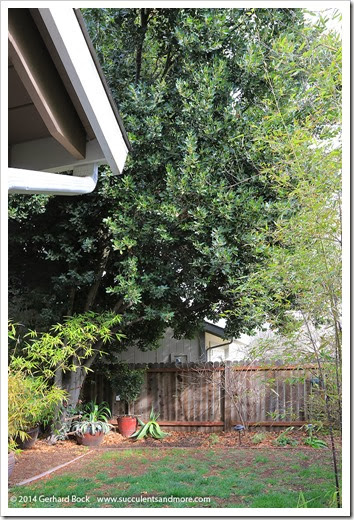 Before: check out how massive this bay tree looks! 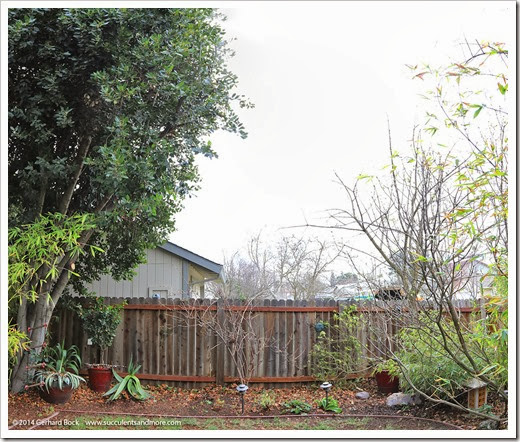 After: much better! Now I can give this bed a radical makeover.

I cannot say enough nice things about the guys at Alliance Tree Service. This is the second time we’ve used them, and they’ve been fantastic on both occasions. They are courteous, professional, knowledgeable, fast and they do a very thorough job cleaning up after they’re done. If you live in the Davis-Woodland area and need a tree service, give them a call. You’ll find their contact info on their website. (This is not a paid endorsement, just a personal recommendation.)