This weekend (May 4 and 5, 2013) is the Sacramento Cactus & Succulent Society’s 53rd annual show and sale. It is being held at Shepard Garden and Arts Center adjacent to McKinley Park. For more information, go to the SCSS web site.

To whet your appetite—or to show you what you missed—here are some photos I took yesterday (Saturday). Be sure to click each photo to see a large version. 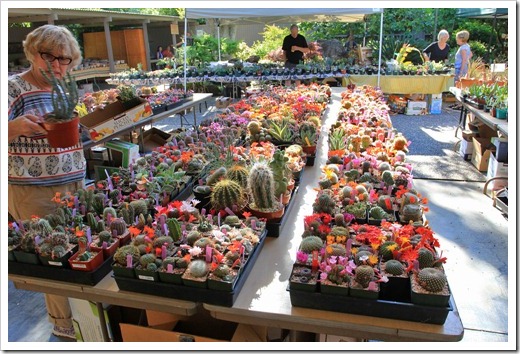 The tables where overflowing with succulents of all descriptions. For many visitors, the biggest draw were the blooming cacti on the Planta Seca tables. I don’t know how owner Bill Munkacsy does it, but his cacti are stunning, year after year. (In case you’re wondering, the majority of the flowering cacti were Rebutia or Sulcorebutia species.) 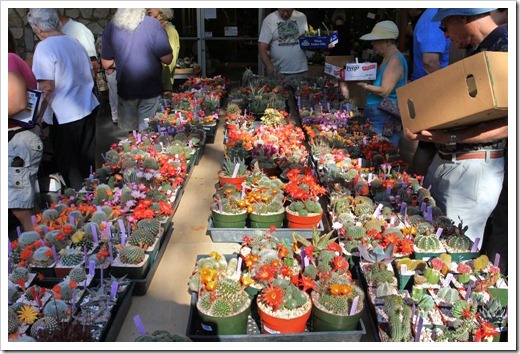 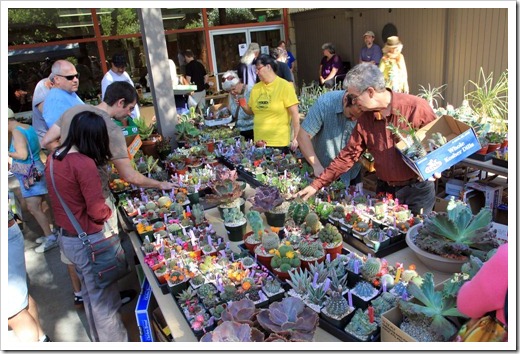 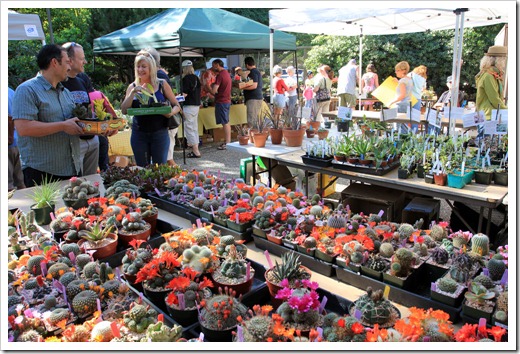 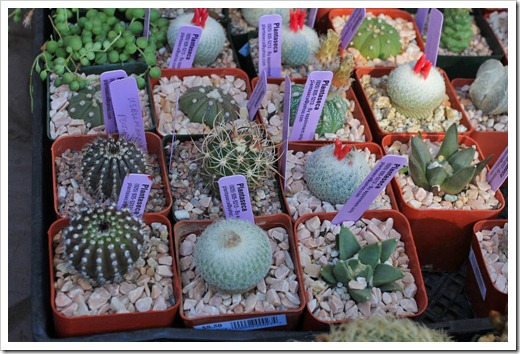 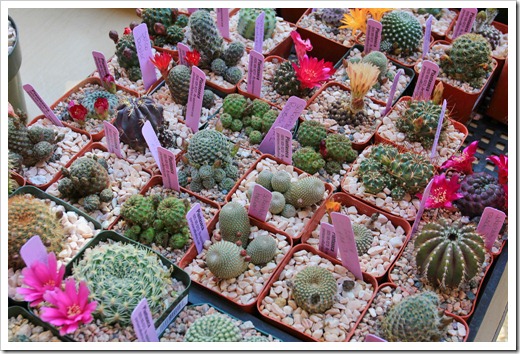 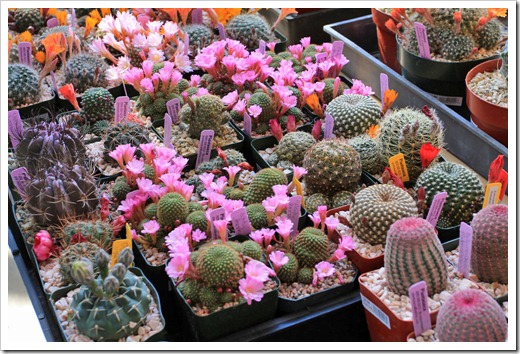 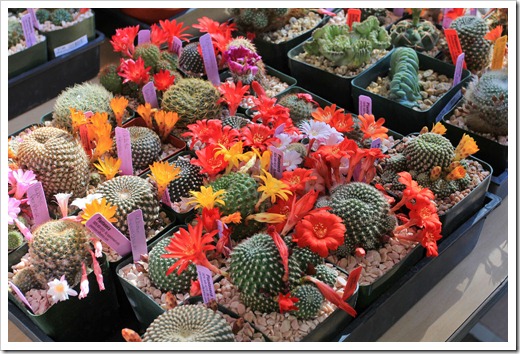 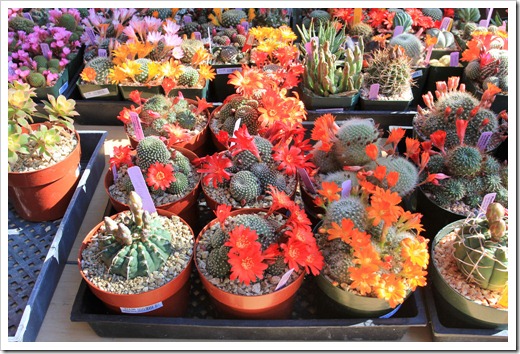 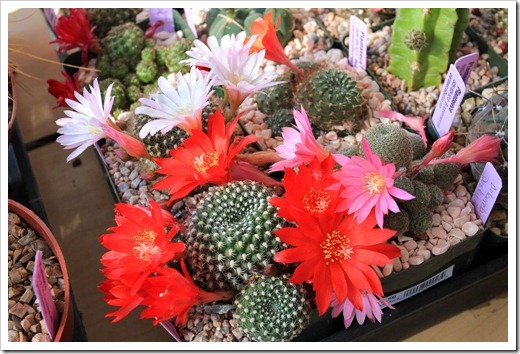 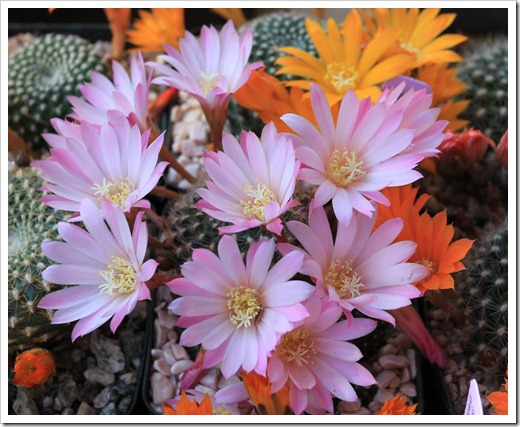 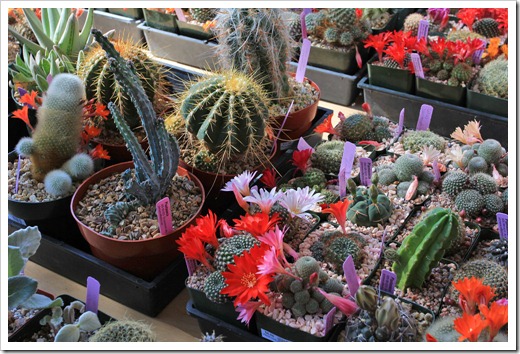 As alluring as the bright colors of these rebutias are, my favorite flowering cactus was the one in the next photo, a Neochilenia odieri. I do have a thing for white or off-white cactus flowers, I must admit! 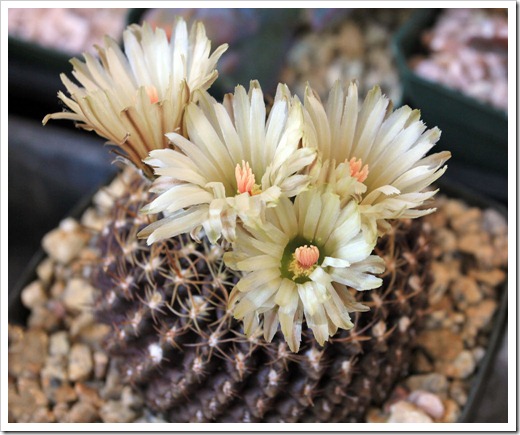 I also liked the cacti that were on the verge of blooming. Knowing how short-lived the flowers are, you’re probably better off buying a plant that isn’t in full flower yet. 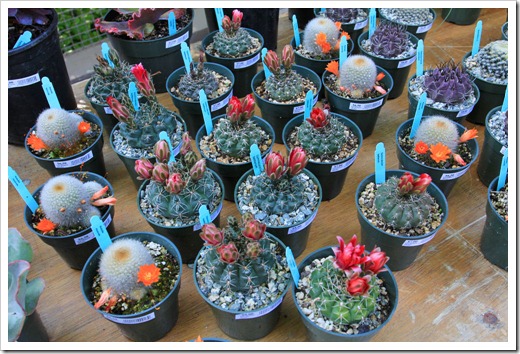 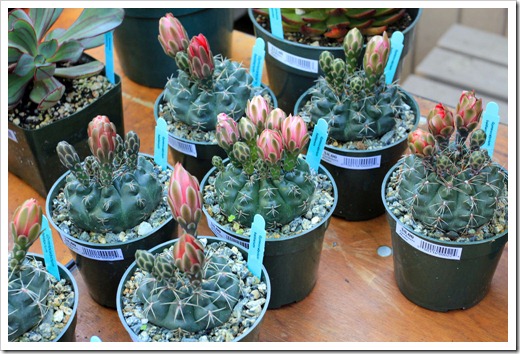 Here are a few non-cactus succulents that caught my eye. (Actually, so many plants caught my eye that I could have posted dozens of additional photos but I didn’t want to go overboard.) 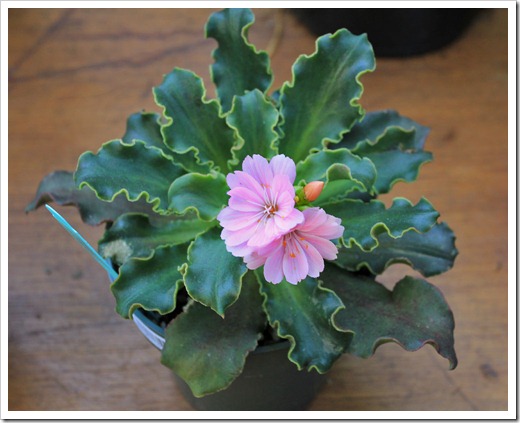 Lewisia cotyledon, a curious succulent native to the West Coast of the U.S. I’ve tried—and failed—several times trying to grow lewisias. They just hate our hot summers, much like dudleyas. 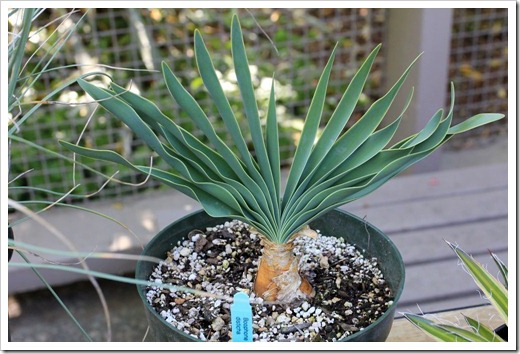 Boophane disticha, a South African bulb that with age forms a stunning fan of leaves. This plant is probably 10+ years old. Unfortunately, at $50 it was too pricey for me. 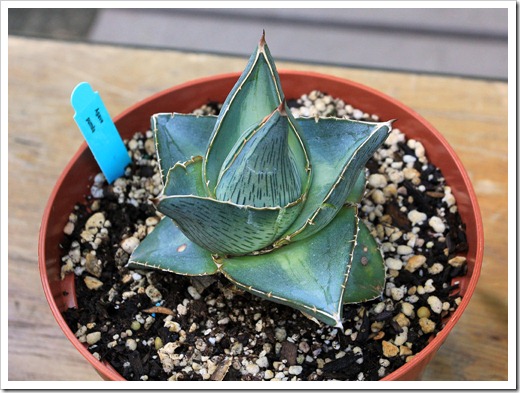 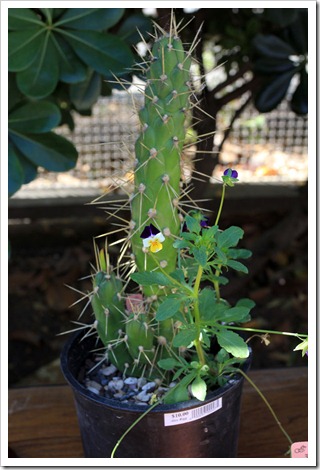 I had to laugh when I saw this cactus: the lucky buyer got a Johnny Jump Up for free!

Club member J.D. Wikert sold not only beautiful succulents from his own garden but also hypertufa dish gardens. This one, incorporating a large piece of driftwood, was particularly striking: 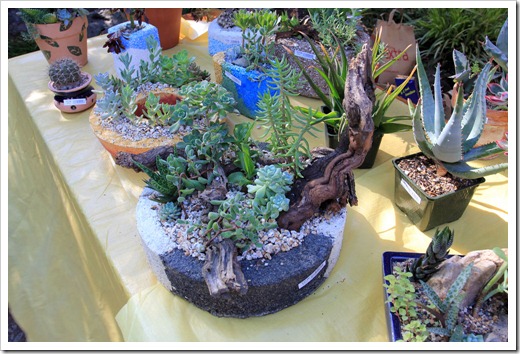 Another personal highlight were the tables of Fresno succulent collector and potter Mark Muradian. Mark’s designs incorporate many different patterns made using tools as varied as coins, rubber stamps, lace, corn cobs, and his own hands. The shapes are equally innovative. I already had two of his pots and bought a third one. 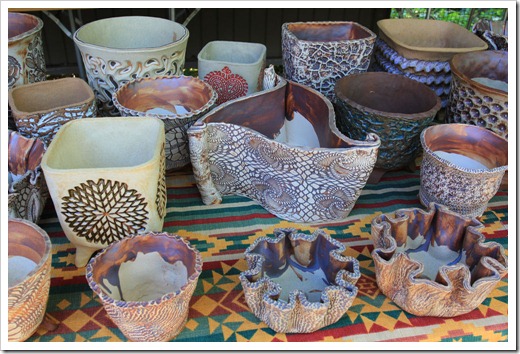 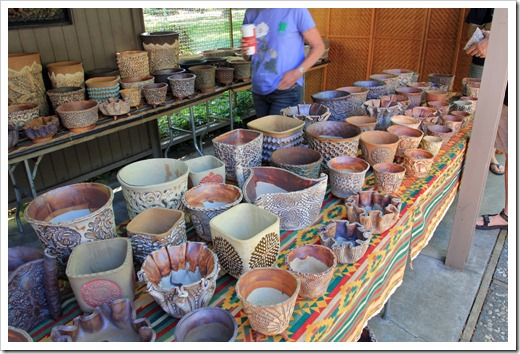 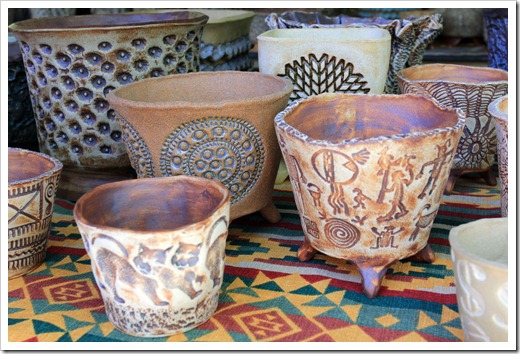 Here are the plants I bought for myself: 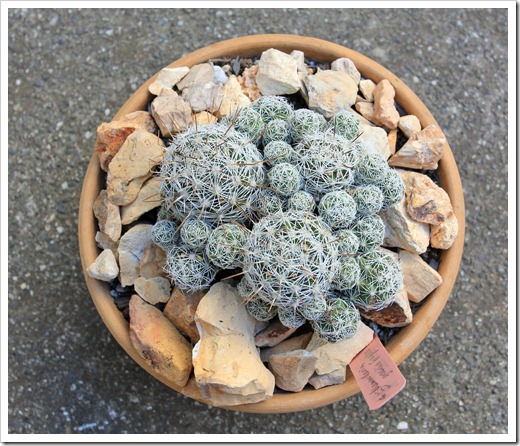 Mammillaria gracilis var. fragilis, aka thimble cactus (shown here in my own pot after repotting) 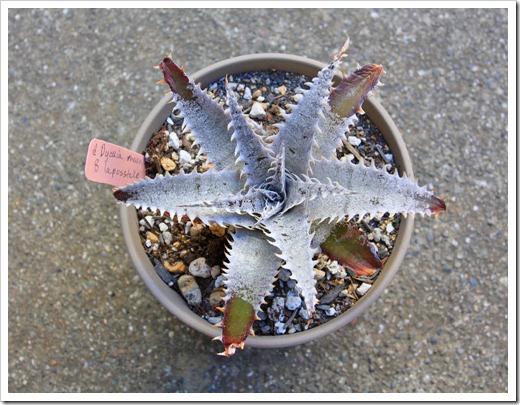 By far the best deals were the plants propagated by SCSS members specifically for this sale: 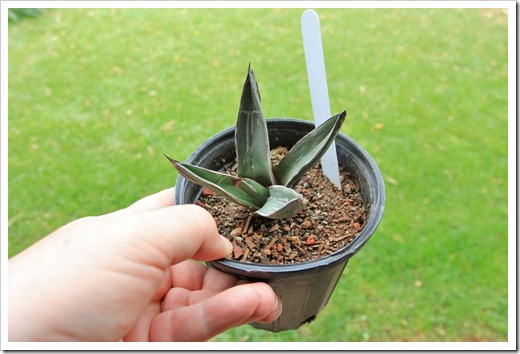 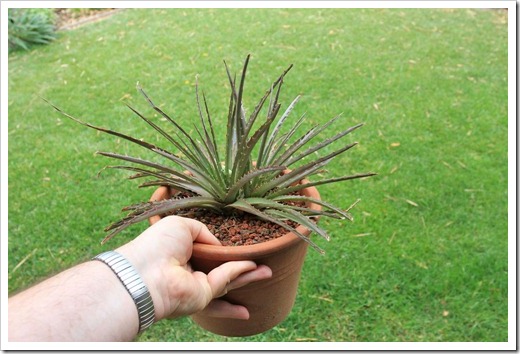 Dyckia sulphurea in an attractive 9-inch rolled-lip terracotta pot (at $4.00 the best deal of the day; the pot alone costs more than that) 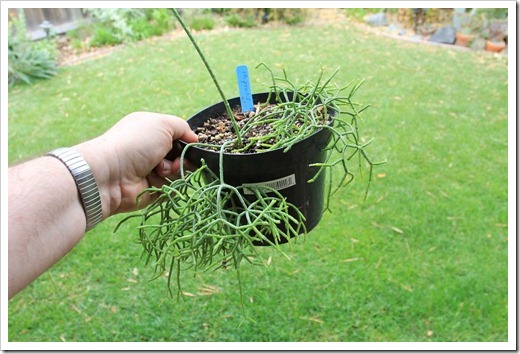 Rhipsalis cactus sold at an unbeatable price of $1.50

This post shows some of the interesting plants that were entered in the juried show.