Palm Springs, California has been a popular resort for over 100 years, especially in the winter when the days are reliably sunny and warm (but not blistering like in the summer). The climate is ideal for growing succulents, and there is one well-known botanical garden nearby: the Living Desert Zoo and Gardens in the neighboring town of Palm Desert. (I visited it in February 2011; click here for my post.)

I would have loved to go back to the Living Desert, but I only had half a day in Palm Springs so I focused on two places I hadn’t visited before: Moorten Botanical Garden and Sunnylands Center & Garden. I’ll have in-depth posts on both destinations at a later date so I’m limiting myself to just a few photos from each.

Moorten Botanical Garden is located in south Palm Springs. In fact, it turned out to be right next door to the motel I was staying at—a mere 3-minute walk! 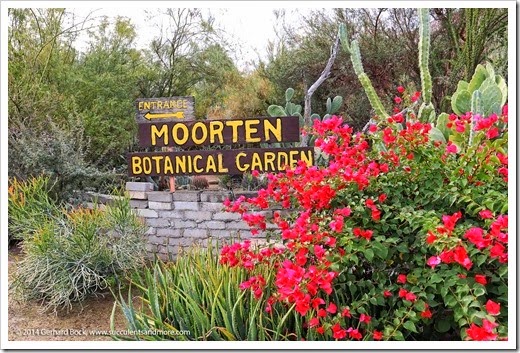 The 1-acre garden was established in 1938 by Patricia and Chester Moorten and is now owned and run by their son Clark. It contains some 3,000 specimens from the Americas and Africa as well as a “Cactarium,” which turned out to be just a small a greenhouse with succulents and caudiciforms. 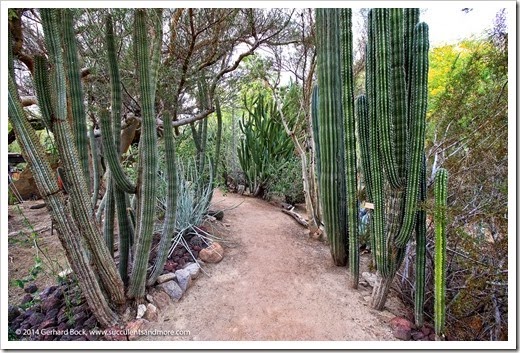 The in-ground specimens are mostly grouped by geographic regions. Many of them are impressive, especially the columnar cacti and some agaves. 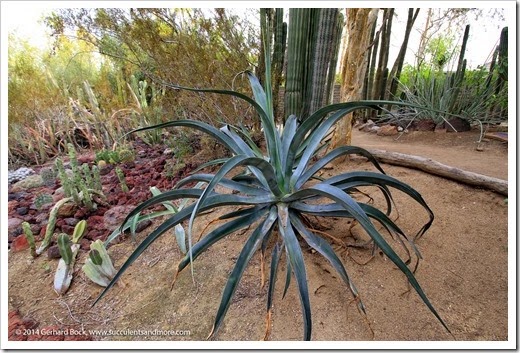 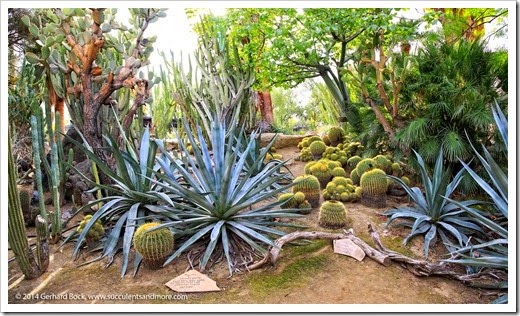 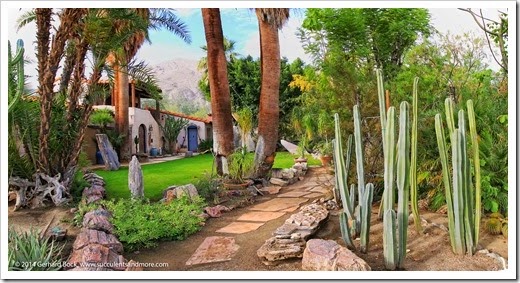 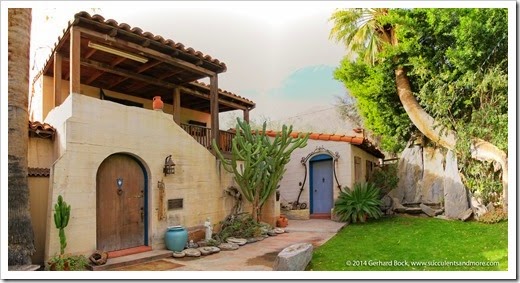 The Moorten Botanical Garden also displays an assortment of rocks and minerals as well as mining equipment, I guess to cater to a wider audience. 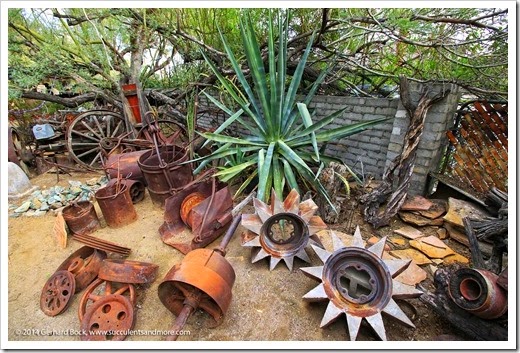 A small nursery sells a limited selection of plants, most them unfortunately unlabeled. 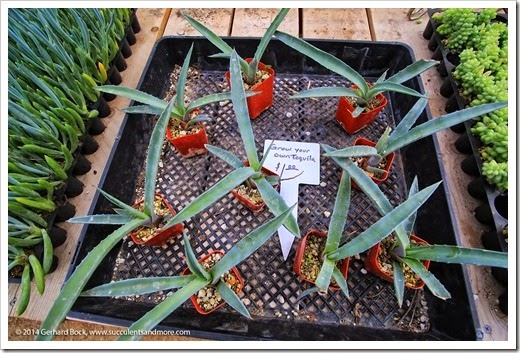 Running a public garden is hard work, even one that is quite small. Many plants looked great, but others clearly are in need of TLC or even replacing. On the plus side, there was a steady stream of visitors this Sunday morning, which made me happy because a small operation like this one needs all the support it can get.

Sunnylands Center & Garden in Rancho Mirage, about 20 minutes from Moorten Botanical Garden, is the polar opposite. This 200-acre estate was owned by publisher and diplomat Walter Annenberg and his wife Leonore, a businesswoman and Chief of Protocol under President Reagan. The Annenbergs were major philanthropists and donated an estimated 2 billion (!) to educational and art-related causes (this, presumably, includes their collection of Impressionist art, which Leonore donated to the Metropolitan Museum of Art after Walter’s death in 2002).

The Annenberg estate consists of the 25,000 sq.ft. main house, guest cottages, a private golf course and 11 man-made lake. The celebrities and political figures who stayed here reads like a who’s who of the last 50 years. Now owned by the Annenberg Foundation, the estate can only be seen on special tours that require reservation. It is still very much in use for political meetings of the highest order: President Obama met here with Chinese President Xi Jingping in 2013 (I bet there were no tours during that time). 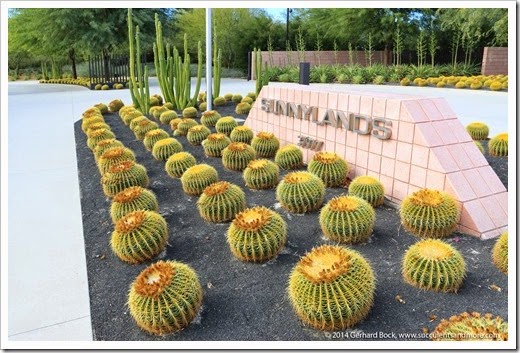 What makes Sunnylands so interesting to succulent lovers are the gardens surrounding the new visitor center built less than five years ago. Nine acres are planted “like an Impressionist canvas” to celebrate the Annenbergs’ love of Impressionist art. Consulting with horticulturist Mary Irish, author of the book Agaves, Yuccas, and Related Plants, landscape architect James Burnett chose a fairly limited palette of just 70 desert-adapted species (they’re listed in this garden guide) and repeated them on a grand scale: there are over 53,000 individual plants. Can you imagine THAT nursery bill! 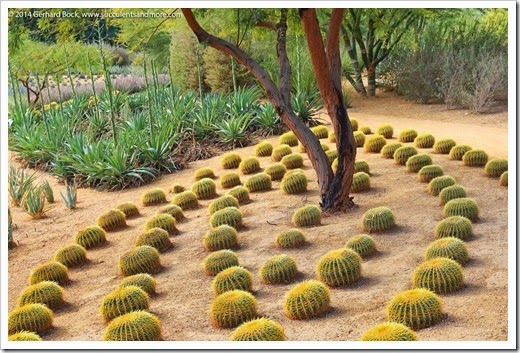 Golden barrel cactus (Echinocactus grusonii), for example, appear everywhere, both in the entrance garden and the garden behind the visitor center. They must have bought every commercially available specimen between Palm Springs, Tucson and beyond! 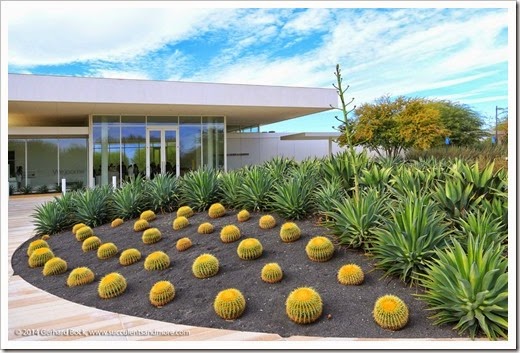 The effect of this mass planting, often in sinuous curves or in straight grids, is nothing short of spectacular. 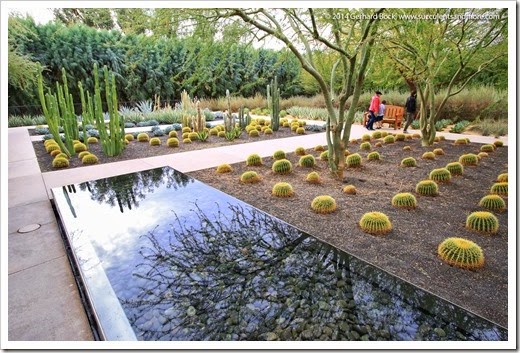 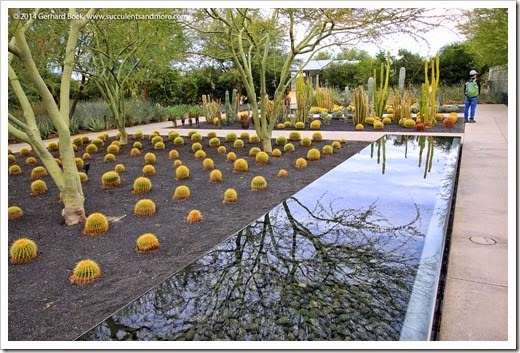 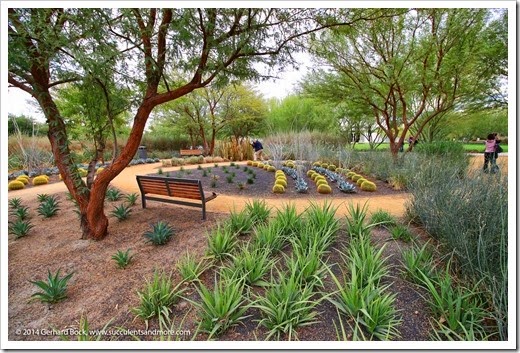 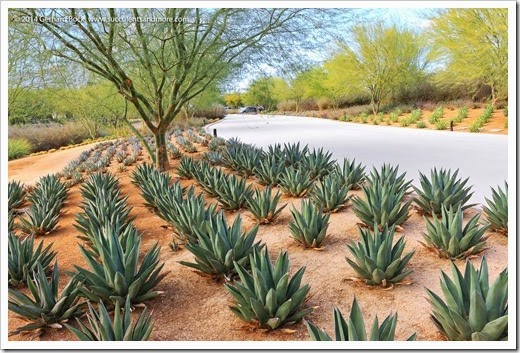 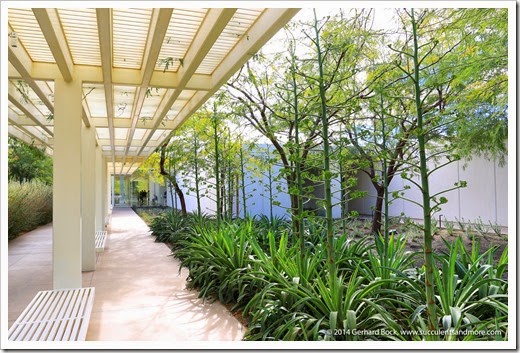 I will have a much longer post on Sunnylands very soon. In the meantime, check out their web site at http://www.sunnylands.org/.

The visitor center and gardens are open to the public Thursdays through Sundays from 9 a.m. to 4 p.m. Admission is free; no reservation needed.