We took advantage of the beautiful weather on Christmas Day to take a walk in the UC Davis Arboretum. On our way to where we parked the car we drove by the Graduate School of Management (GSM). I hadn’t been in the part of the campus in quite a while and almost slammed on the brakes when I saw this: 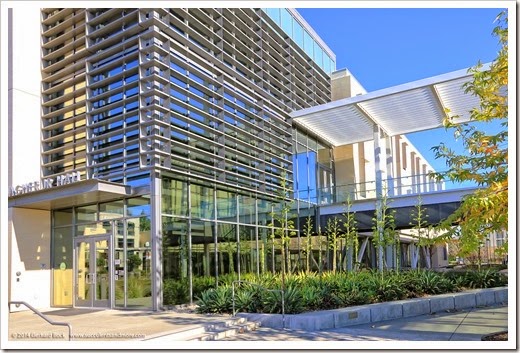 Fortunately campus was deserted and I was able to pull into a parking space nearby, hop out, and take some photos. 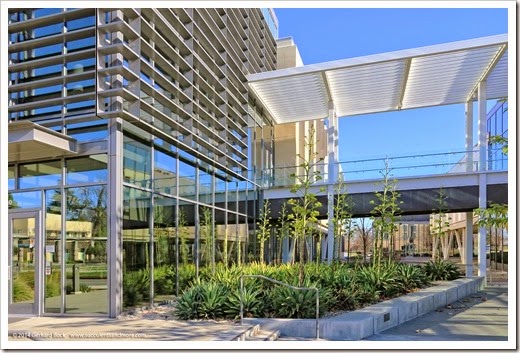 I couldn’t believe the number of flower stalks on these agaves. As you’ll see below, they were in all stages of development: just emerging, flowering and covered in bulbils (live plants). 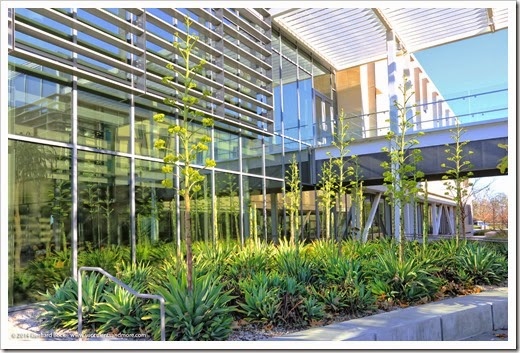 All of these agaves are Agave desmettiana, the regular species, not the variegated cultivar I have (which, as you saw in yesterday’s post, is sporting a massive inflorescence of its own). 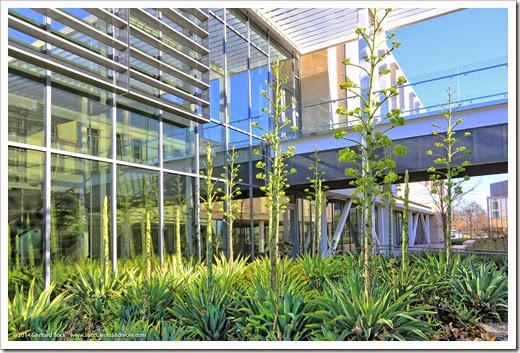 Gallagher Hall, the home of the Graduate School of Management, opened in September 2009. It does have LEED Platinum Certification, but I don’t think a planting of agaves is a requirement for that! 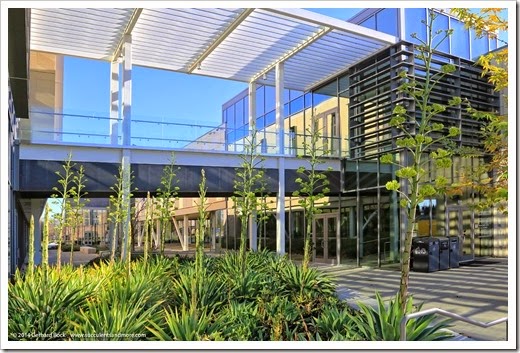 I don’t know when exactly these agaves were planted. From this photo, however, it’s apparent that they were much smaller when they were put in the ground. 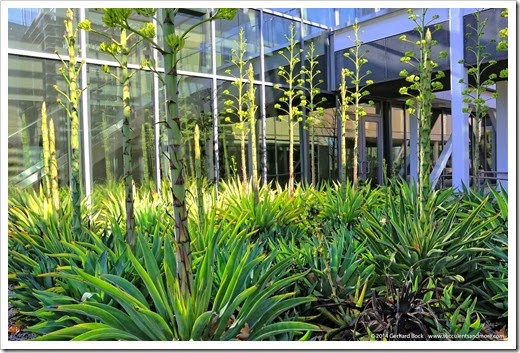 Agave desmettiana blooms at a relatively young age (around 7 years). I imagine the landscape designers picked this species precisely because of that because they wanted this spectacle on a regular, if not an ongoing, basis. As the flowering rosettes die, pups take their place and the cycle repeats endlessly. 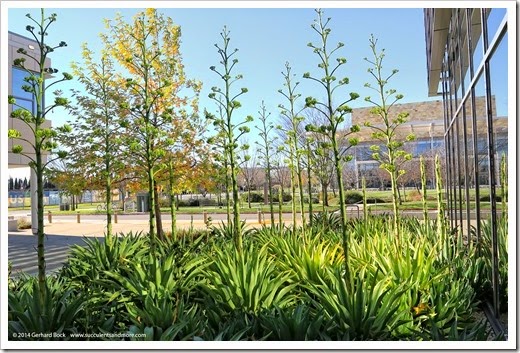 I couldn’t get enough of this “forest” of agaves. It would have been impressive on its own, but because of the expansive glass surfaces, it looked like there were twice as many plants as there actually were. The overall effect was dazzling. 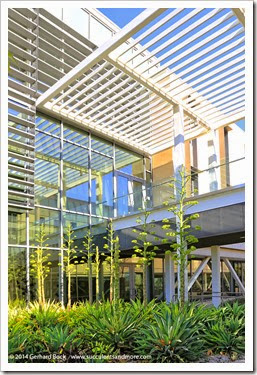 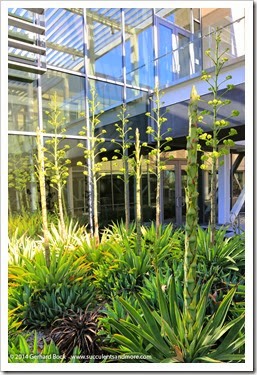 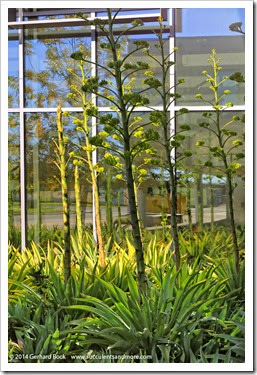 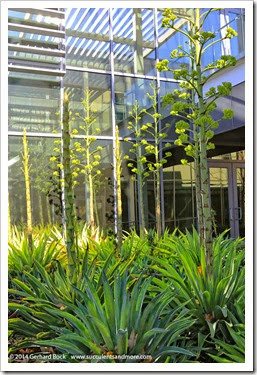 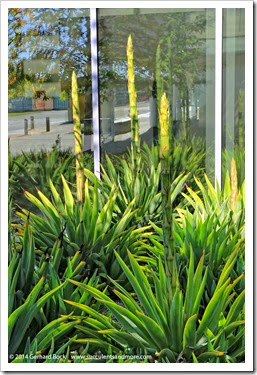 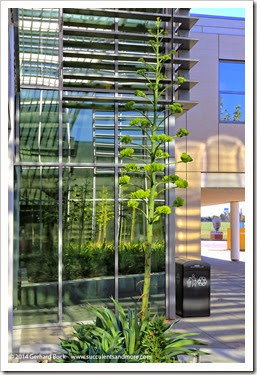 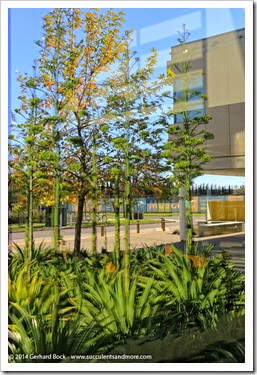 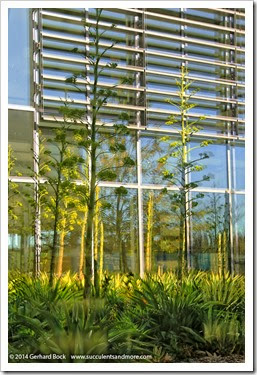 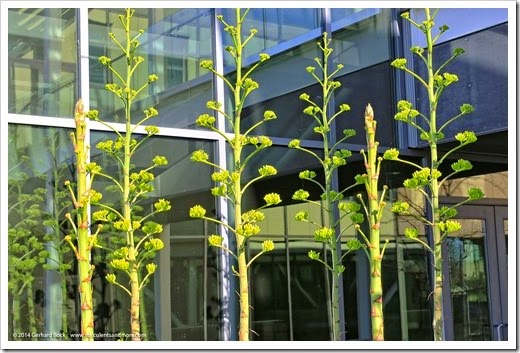 Several flower stalks had either toppled over or been cut down. They were covered with bulbils, many of them a decent size. 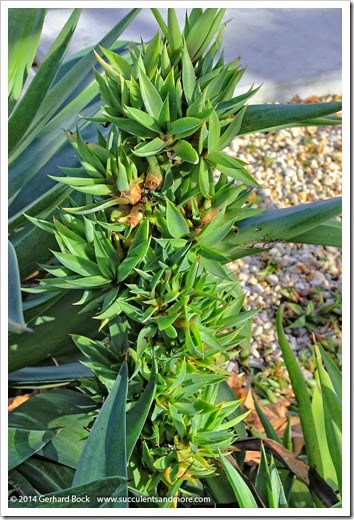 Looking closely, I saw many bulbils on the ground. It seems that the landscapers are collecting them, possibly for replanting elsewhere. 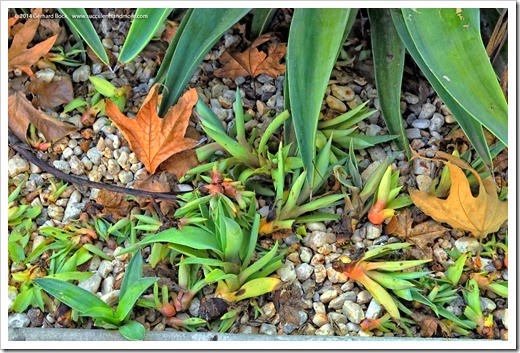 Yes, I was tempted to abscond with one or two bulbils, but my law-abiding nature got the better of me. Plus, I already have more pups of Agave desmettiana ‘Variegata’ than I know what to do with—and a crop of bulbils from my blooming mother plant in the near future.

If you’re interested in seeing this spectacle yourself, Gallagher Hall is located right across the Vanderhoef Quad from the Mondavi Center