It’s no secret that I love agaves. I’ve written more posts about agaves than any other group of succulents. It’s no surprise that I sometimes get asked if there are any books on agaves that I would recommend.

Yes, there are. In fact, I know of four agave-centric books currently in print (sorted by year of publication): 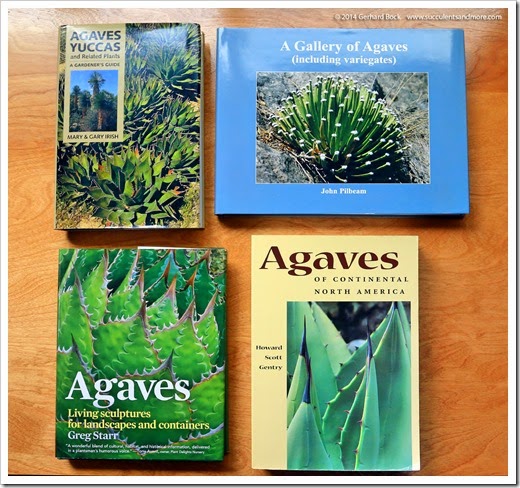 Let’s take a look at each one. I’ll tell you what I think its merits are so you can decide for yourself if it’s the right book for you. 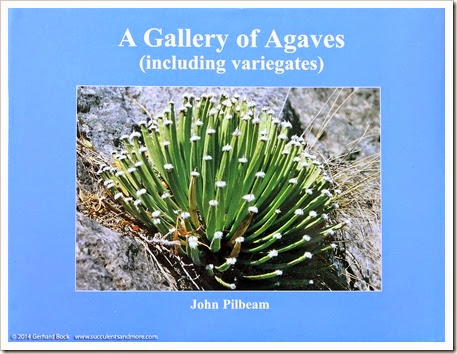 Jim Pilbeam: A Gallery of Agaves (including variegates) (2013)

Published by the British Cactus & Succulent Society, A Gallery of Agaves is the first coffee-table book dedicated to agaves. Measuring a generous 9 × 11 inches, it includes color photos of some 200 agave taxa (species, subspecies, cultivars, and hybrids). In total, the book contains an impressive 305 photos and weighs in at a little over three pounds.

For each entry there is a brief description, including information on its native habitat and where the photo was taken. Here is a typical example: While it contains some useful information on classification and geographic occurrence, as well as some pointers on cultivation, the real value of this book is in the photos. In addition to all the common species, A Gallery of Agaves also includes many Central American and Caribbean species I had never even heard of before, let alone seen. Who knew, for instance, that Cuba is home to more than 25 species and subspecies, 9 of which are illustrated in the book? Sure, you may be able to find similar photos online, but not in an attractive package like A Gallery of Agaves.

In addition, the book contains a fairly sizeable section (some 60 pages) dedicated to variegates, many of them unusual or rare: 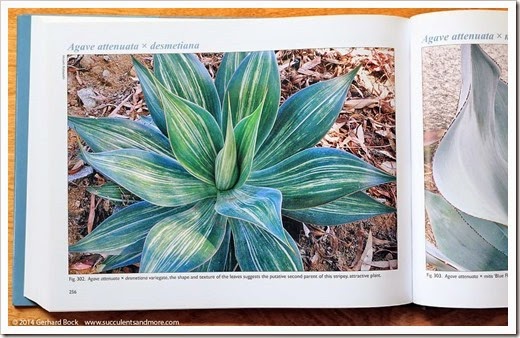 The reproduction quality varies depending on the quality of the source material. Some photos are borderline, but the large majority are very good to excellent. This book may be a bit pricey for people who have just a passing interest in agaves, but it would make a great gift for any true agavephile.

A Gallery of Agaves is a bit difficult to find in the U.S. The best source I know is Chuck Everson: http://www.cactusbookstore.com/a15.html ($59.95).

(Disclosure: I contributed several photos to the book and received my copy for free.) 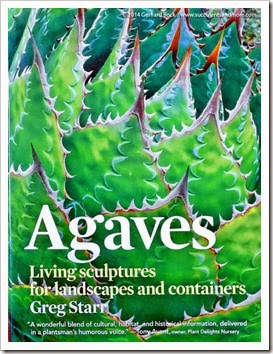 Short and simple: Greg Starr’s book is the one to get, whether you’re a hardcore agave fanatic or just a casual admirer. Out of all four books reviewed in this post, I believe it has the most useful information for gardeners and collectors as well as the most beautiful photos. Here’s a sample page: 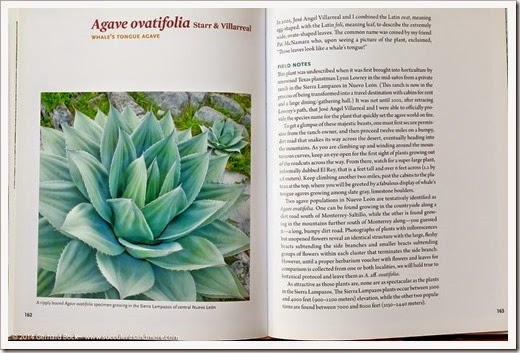 Starr has a great sense of humor that comes across loud and clear. Writing about Agave petrophila, for example, he says:

These canyons rarely if ever experience frost. With that in mind, I have yet to leave any plants outside during winter for fear that they will turn into a gelatinous pile of mush; in fact, plants have visibly shivered when I walked by them with a glass of ice water, even in the summer heat.

Starr has traveled extensively in agaveland—the U.S. Southwest and Mexico—and has visited the type localities of virtually all of the species described in his book. He gives detailed location information that should help you find the best spots to see these beauties in their native habitat if you’re so inclined (and lucky enough to make the trip).

In addition to comprehensive listings for 80 species, cultivars and hybrids, Starr’s book contains a wealth of useful information on a variety of topics, such as reproduction, distribution, taxonomy, horticultural history, cultivation, and diseases.

Three sections in the back of the book go even further, including a listing of agaves by size, a detailed glossary of botanical terms, and a very useful comparison of look-alike species that are sometimes hard to tell apart. Very specific descriptions and illustrative photos help you distinguish between similar-looking species, for example Agave colorata, Agave marmorata, and Agave zebra: 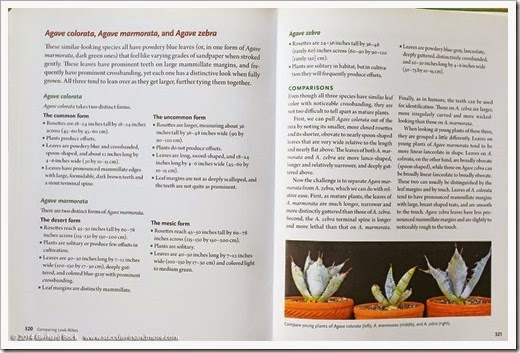 Criticism about Agaves: Living Sculptures for Landscapes and Containers seems to center on which species Starr chose to include, or rather what he decided to leave out. For instance, there are no entries for Agave americana, Agave attenuata or Agave desmettiana, all popular and widely grown. In Starr’s defense, the book doesn’t claim to be a comprehensive treatise on all agaves in cultivation. Confronted with limited space, Starr opted to forgo some of these popular species and include lesser known or newly described species, some of which had never been covered in a book before. Agave albopilosa and Agave petrophila are two good examples.

Agaves: Living Sculptures for Landscapes and Containers is widely available from all the usual sources. You can even buy an autographed copy from the author himself: http://starr-nursery.com/product-category/books/ ($34.00). 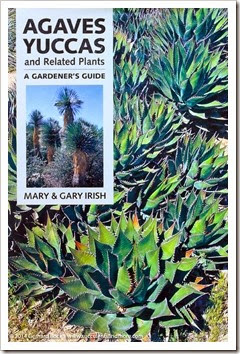 Until the publication of Greg Starr’s Agaves, this is the book I would have recommended as the prime go-to source for gardeners and collectors. Starr gives credit to Mary and Gary Irish (Agaves, p. 9):

After the publication in 2000 of Agaves, Yuccas, and Related Plants by Mary Irish and Gary Irish, interest in the cultivation of agaves was pushed to the forefront of horticulture in the southwestern United States…. From the great foundation laid by Irish and Irish, this book is a natural progression.

Agaves, Yuccas, and Related Plants covers the history, botany, taxonomy, and cultivation not just of agaves, but of also of Yucca, Hesperaloe, Furcraea, Manfreda, Beschorneria, Polianthes, Nolina, Dasylirion, Beaucarnea, and Calibanus. The main section of the book includes detailed profiles on over 100 species, subdivided into sections such as “Common name,” “Size,” “Leaves,” “Bloom,” “Distribution,” “Propagation,” “Cultural requirements,” and “Similar or related species.” 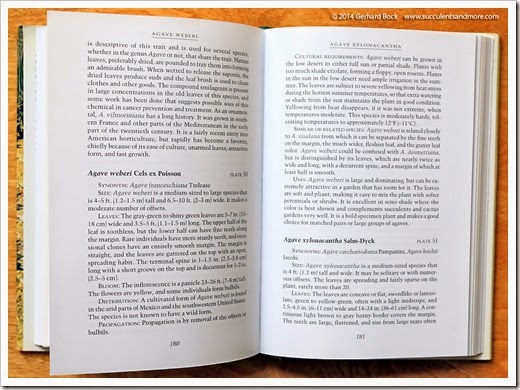 The bulk of the book is straight text and looks fairly plain, much like books used to be “in the old days.” However, two sections with color photos (100 in total) help put a face to the name, as it were: 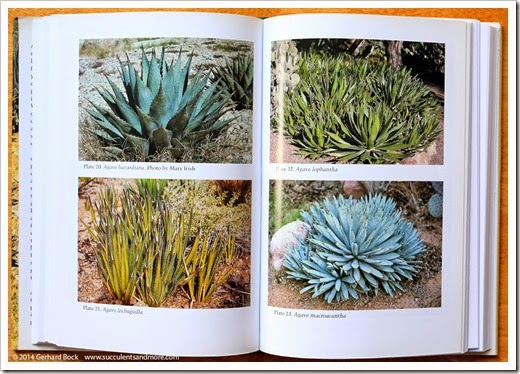 While Starr’s Agaves has superseded Agaves, Yuccas, and Related Plants in many respects, I still find myself referring to it quite frequently, not just for agave species missing from Starr’s book but also for genera on which no standalone book has ever been published, including Yucca, Nolina and Dasylirion. Particularly useful is the first-hand experience the Irishes gained growing many of these plants at their home at the time in Phoenix, AZ. From their descriptions I can extrapolate how a particular species might fare here in the Sacramento Valley.

Although Agaves, Yuccas, and Related Plants is out of print now, it’s still widely available on Amazon, Abebooks and other sites for approx. $15.00. 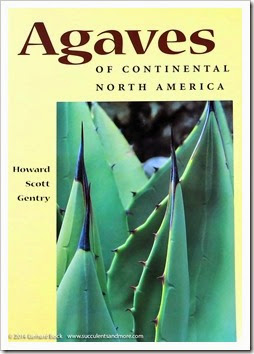 Gentry’s Agaves of Continental North America is the granddaddy of them all. First published in 1982, this 670-page tome is based on the groundbreaking research Gentry conducted over a 25-year period in various positions for the U.S. Department of Agriculture and the Desert Botanical Garden in Phoenix, AZ. Unlike the three books above, Agaves of Continental North America was not written with laypersons in mind. This is hardcore botany: 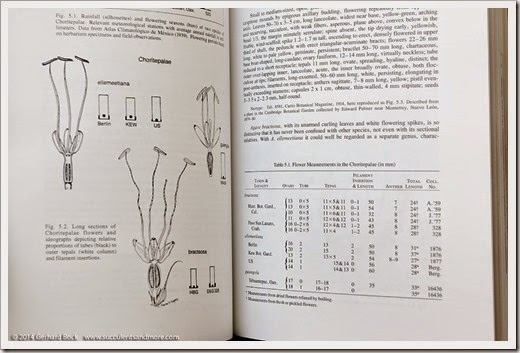 While there are many photos, they are all in low-resolution black-and-white: 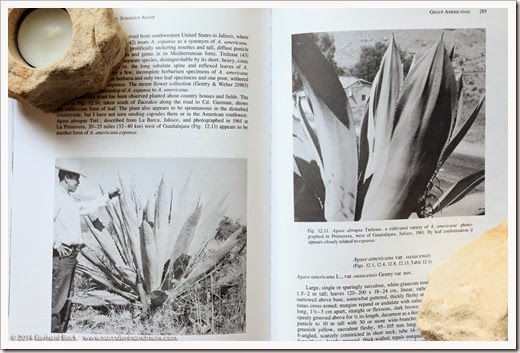 While Agaves of Continental North America is still considered the leading work on North American agaves, 32 years have gone by since its original publication, Much has happened since then; many new species have been discovered, and old ones have been renamed (including Agave gentryi, described in Agaves of Continental North America as Agave macroculmis) or reclassified. Because of this, and the very dense writing, I would recommend this book only to hardcore agave aficionados who have a profound interest in botany. For everybody else, it’s overkill and a waste of money.

The original 1982 hardcover edition of Agaves of Continental North America is long out of print, but the 2004 paperback reprint is still available from the usual sources. At a list price of $55 (about $43 on Amazon) it’s not cheap.