Update on our palo verdes—and a sighting downtown

I was going to post an update on our palo verde trees when my wife told me that the specimen in front of the Davis Food Co-op (620 G Street) is in full bloom. It’s still a juvenile—more large shrub than tree at this point—but it’s covered with cheery yellow flowers that attract bees from far and wide. When I took these photos, the buzz from hundreds of bees was so loud you could hear it from ten feet away. 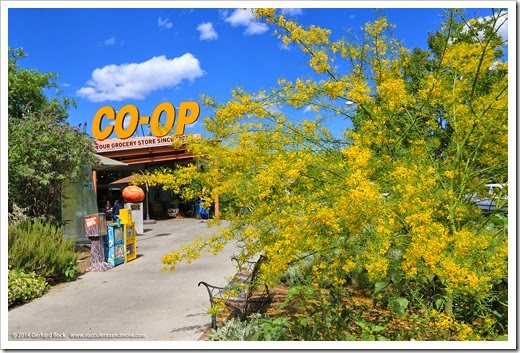 The flowers against the California sky dotted with puffy white clouds are a beautiful sight. 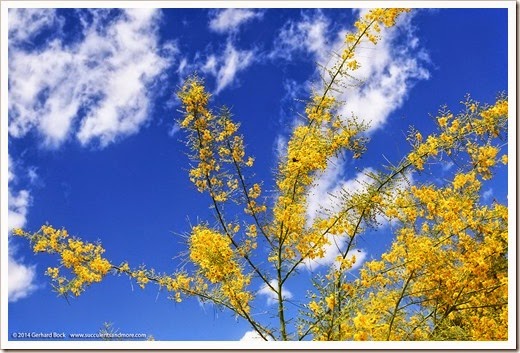 As if that weren’t enough, two thornless and free-flowering hybrids of superior horticultural value are available in the trade: ‘Desert Museum’ (a naturally occurring hybrid between the foothills, blue and Mexican palo verde first identified in the late 1970s by Mark Dimmitt, at the time Director of Natural History at the Arizona-Sonora Desert Museum outside of Tucson) and ‘Sonoran Emerald’ (presumably a hybrid involving the Sonoran and possibly the blue palo verde but I wasn’t able to find definitive information about its parentage). 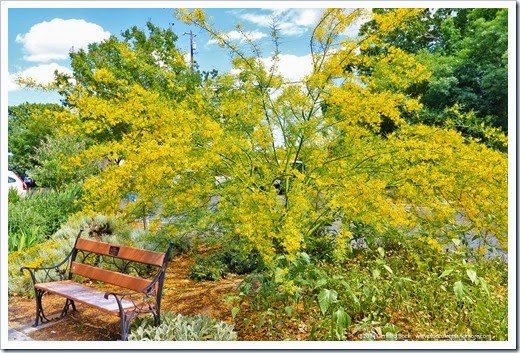 I’m not a palo verde expert and I can’t tell you with certainty what the specimen in front of the Davis Food Co-op is, but its growth habit, flowers and leaves look very similar to our two ‘Desert Museum’. 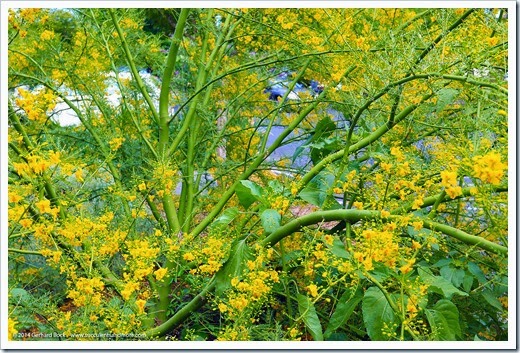 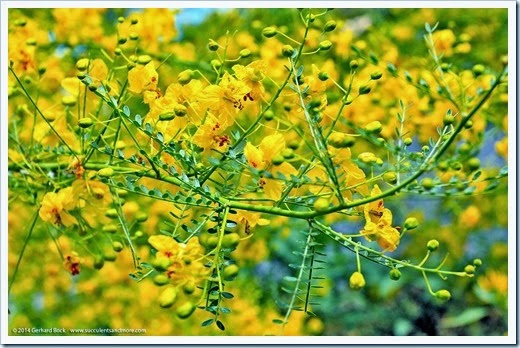 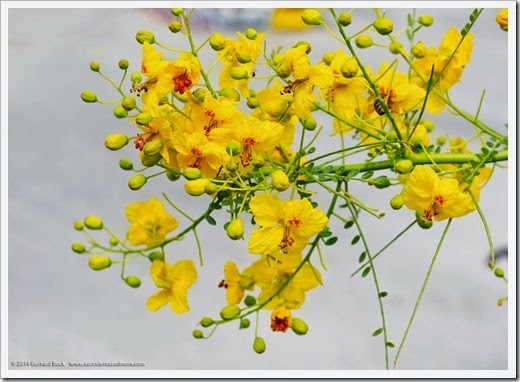 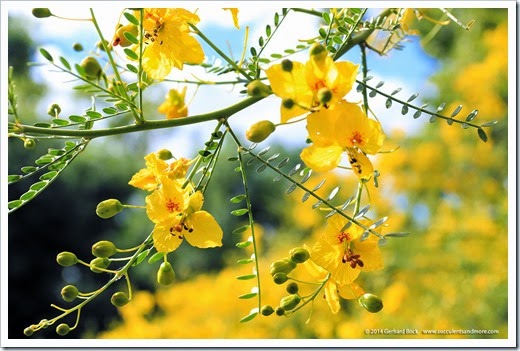 The two ‘Desert Museum’ palo verdes I planted last fall in front of our house are much smaller than the one at the Davis Food Co-op and only have a smattering of flowers. But I expect they will be significantly larger—and have many more flowers—next year. 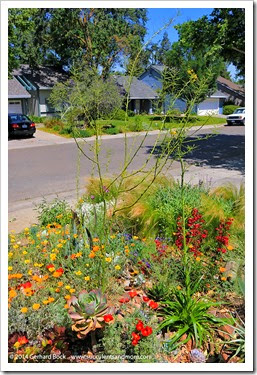 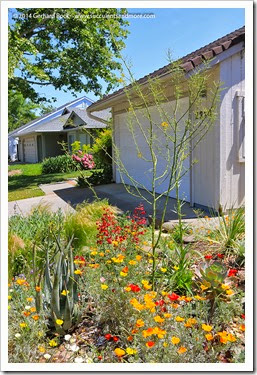 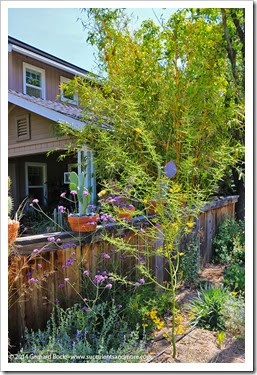 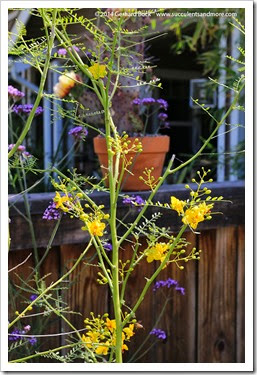 ‘Desert Museum’ #2 on the other side of the front yard, along the street

As part of our new desert garden bed next to the house—technically outside the backyard fence since we’re on a corner lot—we planted a ‘Sonoran Emerald’ palo verde. This hybrid has denser growth than ‘Desert Museum’, and even our 15-gallon specimen has hundreds of flowers already. 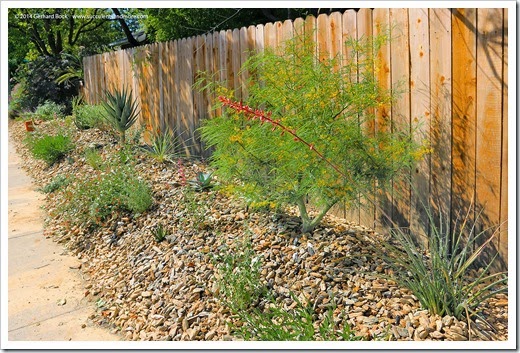 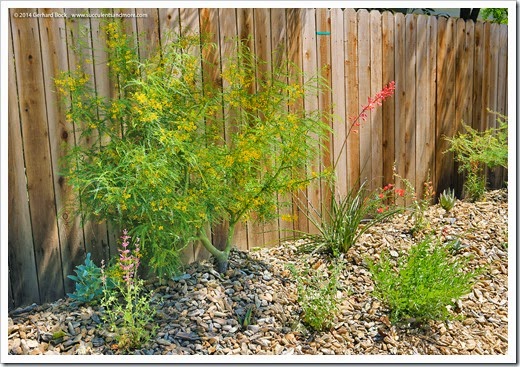 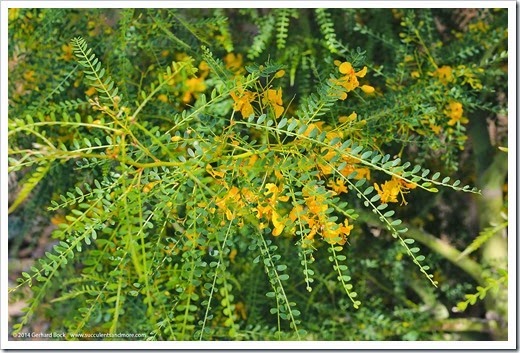 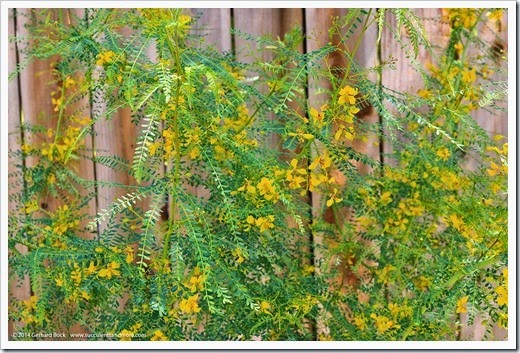 Palo verdes are uniquely sculptural and extremely drought-tolerant. This makes them ideal trees for our area, and yet they are exceedingly rare. I had a very hard time finding one last fall, and I doubt availability in the Sacramento area has improved since then. The best source in our area continues to be Village Nurseries. That’s where I bought all three of ours, the two ‘Desert Museum’ and the ‘Sonoran Emerald’. They also carry the blue palo verde (Parkinsonia florida) and the Sonoran palo verde (Parkinsonia praecox); if you talk to them, note that their database lists all palo verdes under their previous genus, Cercidium.