The garden after our vacation

As hard as it is to come back from vacation, one thing I always look forward to is seeing what has changed in the garden. Davis has been in the throes of a heat wave that started during our last week of vacation so many plants are stressed. Others love the heat, especially the bamboos. These two, Bambusa chungii ‘Barbellata’ and Bambusa multiplex ‘Alphonse Karr’, are happy as a clam, producing lots of new growth. 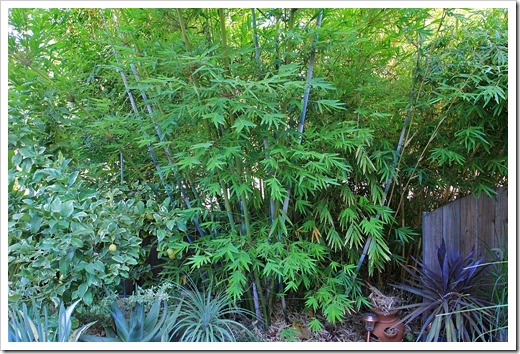 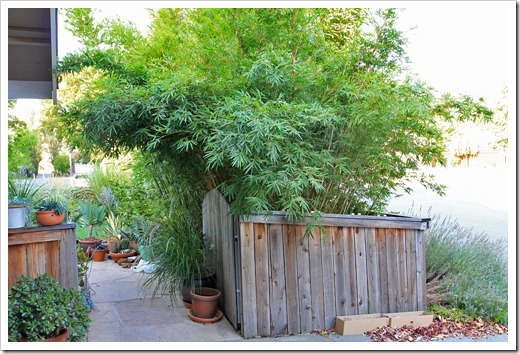 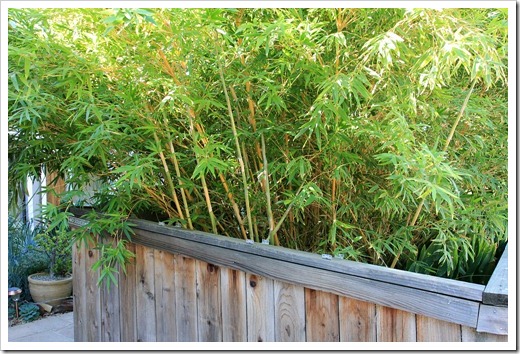 Bambusa multiplex ‘Alphonse Karr’. Too many new culms to count.
I will definitely have to do some thinning and pruning soon.

Two other bambusas, Bambusa textilis ‘Mirabilis’ and Bambusa eutuldoides ‘Viridividatta’, also have new culms. It’s a bit hard to see in the photo below, but the culms on the textilis are approaching two inches in diameter. 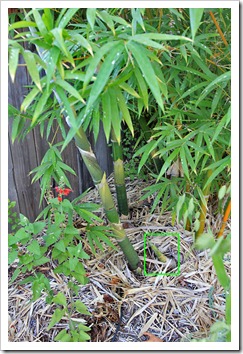 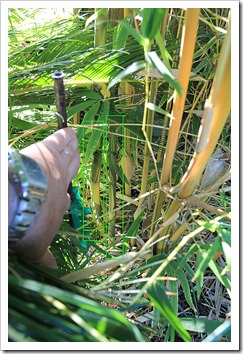 The ornamental grasses in the front yard have been going to town. As much as I love our miscanthus cultivars, I hate it when they get to the point in mid-summer where they start to flop over under their own weight, smothering neighboring plants. My wife has been wanting to remove the “bullies,” and I can see her point. 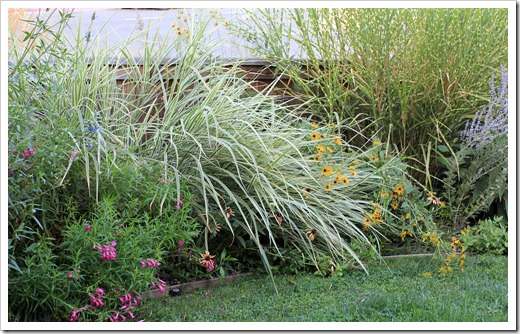 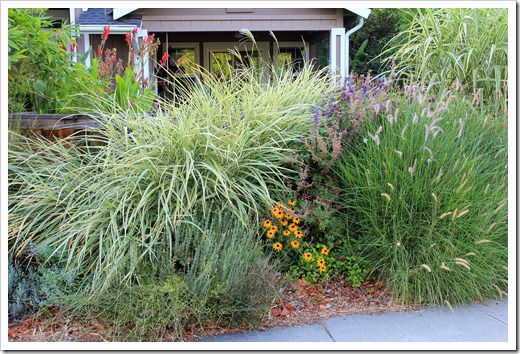 The one miscanthus that does not flop over is also the largest we have, ‘Cabaret’ (seen on the right in the next photo). It stays upright no matter what. It’s 6 ft. tall now and at least that wide. 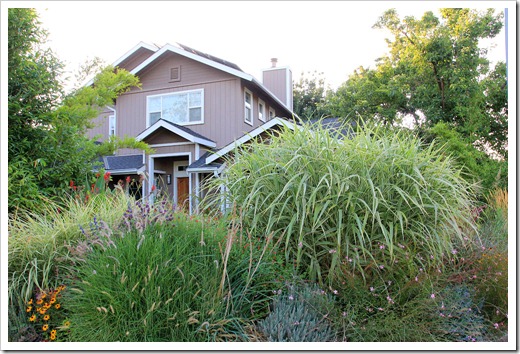 Another well-behaved grass—and wonderfully see-through to boot—is Elliot’s love grass (Eragrostis elliottii). It has exploded since we left on our trip. And the Karl Foerster grass behind it (Calamagrostis × acutiflora 'Karl Foerster') looks as good as it ever has. 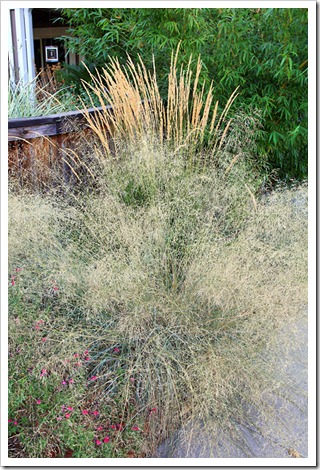 Guess what else is thriving? This thistle! It’s so tall and obvious, I almost didn’t notice it! 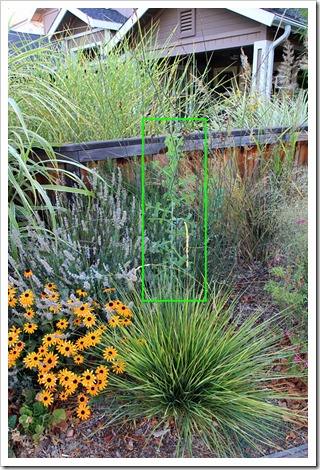 This thistle is clearly happy, too

Just before we left on our trip, I was given a large Orbea variegata. It didn’t have any flowers then but it has one now, and it is a stunner. The smell is unpleasant, but nowhere near as bad as some other carrion flowers. 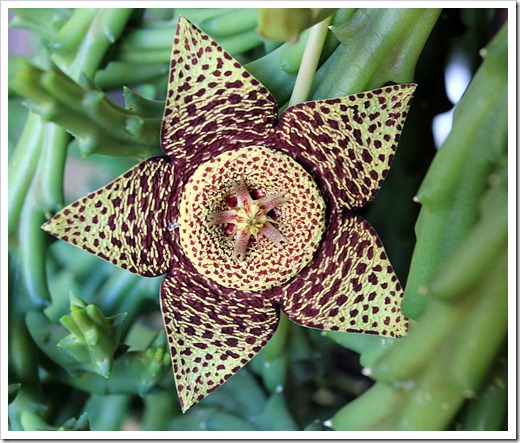 These two cacti, Pilocereus pachycladus, are among my favorites because of their incredibly blue coloration. I bought them a couple of years ago in 1½ inch pots and they’ve grown tenfold since then. I swear they added another inch in height in the last month, especially the one on the right. (They were the same size, originally.) 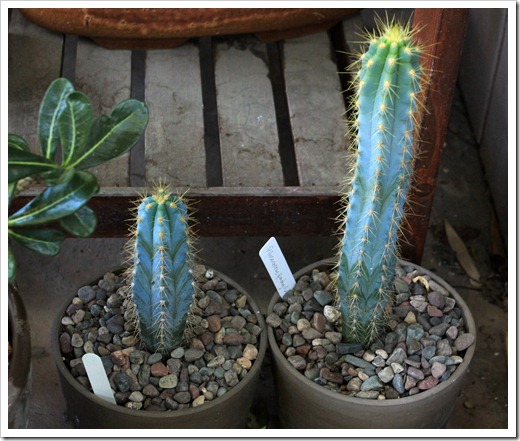 I didn’t expect this desert rose (Adenium obesum) to still be blooming, but it is. It’s had over a dozen flowers this year. 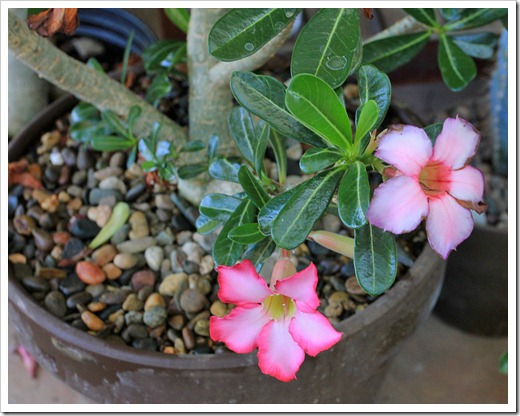 If you think absolutely everything is perfect, rest assured that’s not the case. Like every summer, I’ve been battling mealy bugs for months now. I threw away a cactus that was heavily infested, and I’ve been vigilantly spraying plants with insecticidal soap at the first sign of infestation.

This Aeonium hierrense is in a pot next to our front door. Above it is a light that’s on all night. Spiders love to build webs near the light because it attracts bugs. Most of the detritus you see in the next photo are bug carcasses sucked dry by spiders but the white fluffy dots are signs of mealy bug activity. I just sprayed the plant with soap and will keep an eye on it. It’s a rare aeonium and I don’t want it to be damaged. 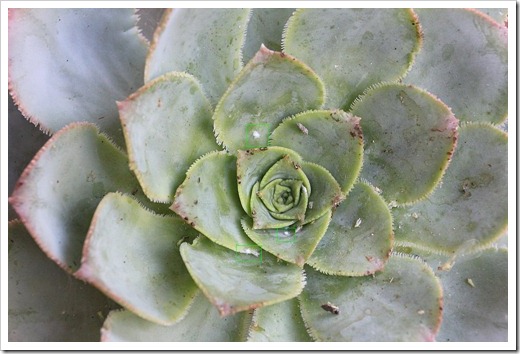 The other major theme was plants suffering from the heat and a lack of water. I had left detailed instructions for our house sitter and he did a great job. The inevitable mistakes were all mine, like telling him not to water this plant, Fenestraria rhopalophylla, commonly called baby toes. Looking at it, it did need more water than it got, and it also needs to be moved to a spot where it gets more sun. 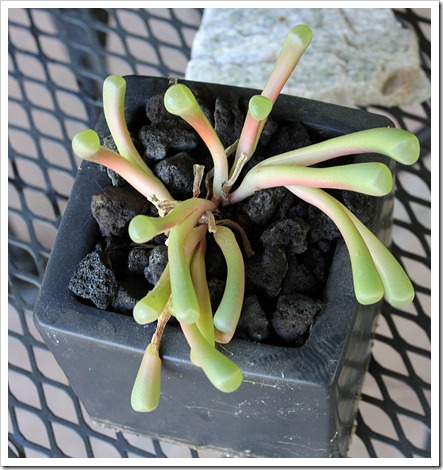 The lion’s tail (Leonotis leonurus) in the next photo looks completely dead now. For some inexplicable reason, its drip emitter got turned off about six weeks ago so it received no water for who knows how long. Before we left there was still some green left and I was hoping it would recover but it doesn’t look like it now. 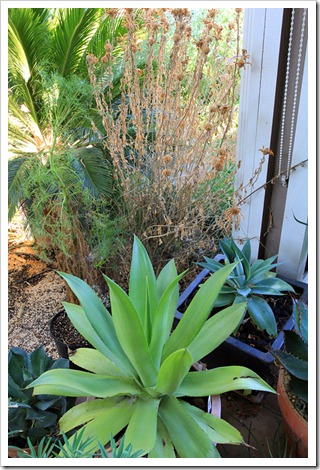 Speaking of drip irrigation: As convenient as it is, it does require monitoring. I use adjustable spray emitters and I swear the squirrels or some other unseen creatures mess with them occasionally. One day they’re perfectly fine, and the next day they release much less water than before. Oddly enough it’s never the other way around.

Case in point: This potted temple bamboo (Semiarundinaria fastuosa) looks like it didn’t get quite enough water when I was gone. 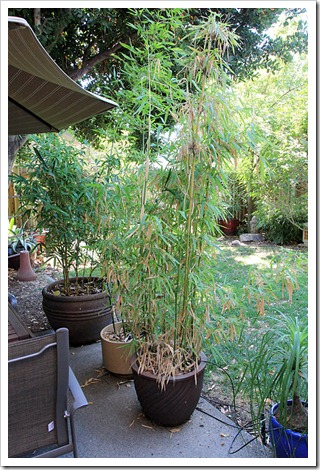 And this Fargesia dracocephala ‘Rufa’ still looks bad. In late April or early May the ground fault interrupter that controls the sprinkler controller tripped unknownst to me. Nothing got watered for at least a week, maybe two. This ‘Rufa’ was the proverbial canary in the coal mine; when its leaves started to desiccate, I realized that something was wrong. I’m thinking I need to cut all the culms back to the ground and wait for new growth. Or better yet, take it up to my in-laws’ place and plant it in the ground. My experience has shown that ‘Rufa’ isn’t well suited to pot culture. 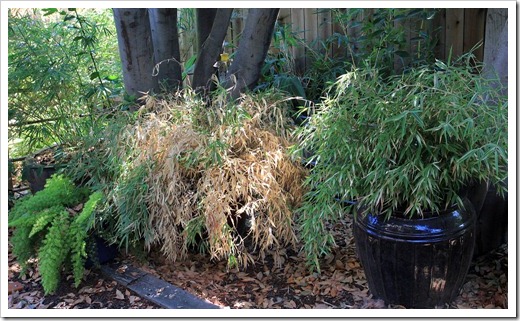 My volunteer cardoon (Cynara cardunculus) is another victim of the heat and lack of water. Or maybe that’s just its normal behavior at this time of year? It sure doesn’t look like it will be a perennial in our garden. 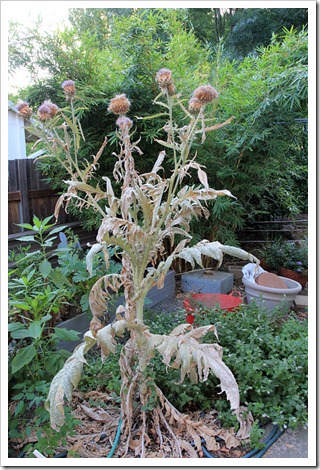 Our cherry tomatoes are producing like crazy but the plants are a tangle of vines, as always. The tomato cages we use are clearly insufficient. Every year we resolve to find a better solution but we never get around to it. But in spite of the mess, the tomatoes taste great! 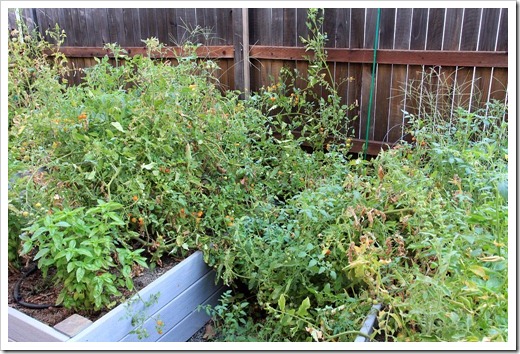 This Echeveria ‘Afterglow’, created by the late Don Worth whose garden I had the pleasure of visiting earlier this summer, has started to bloom. Next to is the terminal flower stalk of an Aenonium tabuliforme, purchased less than a year ago. Like all aeoniums and most agaves, the plant dies after flowering. I’m hoping for some viable seed, otherwise I’ll be left with nothing but memories. 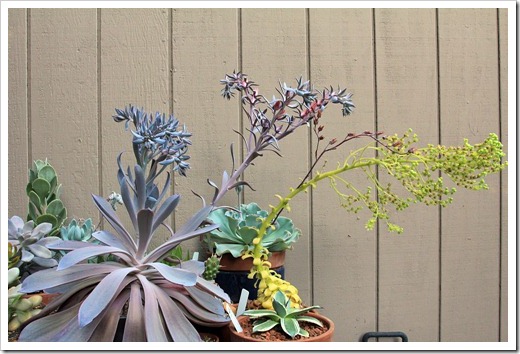 Tucked away next to the air conditioner I found a pleasant surprise: new arms forming on one of the Queen of the Night cacti (Cereus hildmannianus ssp. hildmannianus) I propagated last year from cuttings found in the gutter. The nasty-looking hole in the middle was caused by a calla lily leaf touching the cactus for an extended period of time in the winter. This caused rot to form on the stem, but the cactus miraculously healed itself. It’s not pretty but it’ll give the plant character when it’s a multi-armed specimen some day. I just need to find room to put it in the ground. 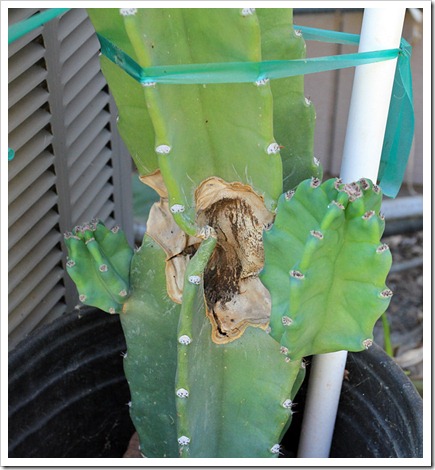