The first stop of the day before leaving Window Rock was to see the rock formation for which the capital of the Navajo Nation is named. I was astounded by how perfectly round the opening in the rock was; I expected more of an arch. In the Navajo language it is called “Tségháhoodzání,” which means “rock with hole through it.” 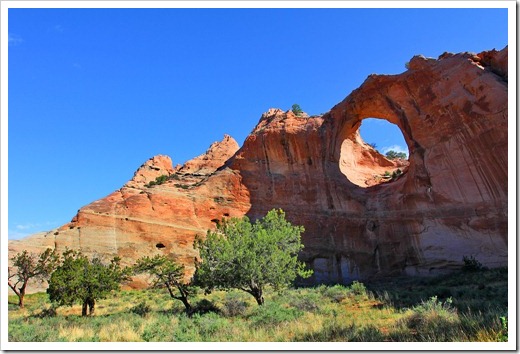 Window Rock in the capital of the Navajo Nation

Speaking of the Navajo language (called “Diné bizaad” in Navajo), it is still spoken by 120,000 people. In fact, during our stay in the Navajo Nation I overheard quite a few people speaking to each other in Navajo. There is also an all-Navajo AM radio station, KTNN, which we listened to yesterday our our way to Canyon de Chelly. They even played country music in Navajo.

The Navajo language played a central role during World War II. Navajos were recruited by the U.S. Marine Corps to create a Navajo code to be used in the Pacific theater. Thanks to their efforts, the U.S. was able to take Iwo Jima and other islands in the Pacific. The Navajo code was never broken by the Japanese. 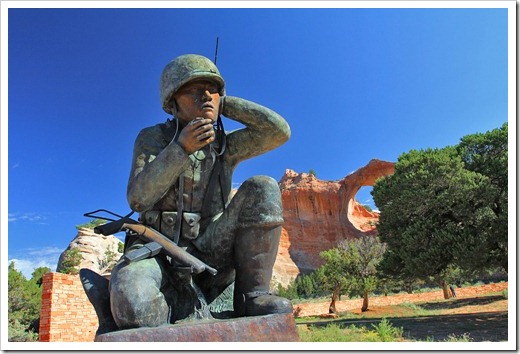 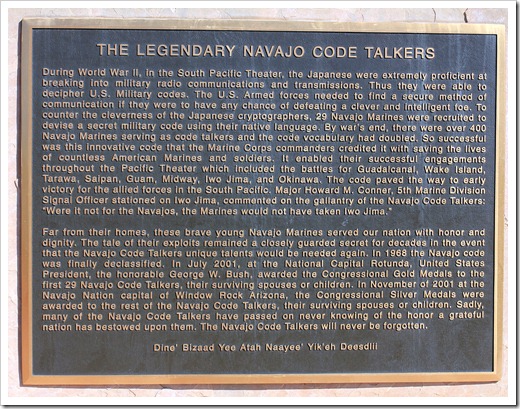 When we first arrived in Window Rock on Friday, we saw a whole bunch of strange flying creatures hovering over a clump of blooming thistles outside the Navajo Nation Museum. They were slightly smaller than the hummingbirds we have in Davis (their body was about 3-4 inches in length) and they were flapping their wings blindingly fast, just like hummingbirds, but at the same time they clearly weren’t hummingbirds. I took some photos and my wife showed them to the man working at the reception inside the museum but he didn’t know what they were. In our motel room, my older daughter did a Google search and found out that these were white-lined sphinx moths, also called hummingbird moths (Hiles lineata). 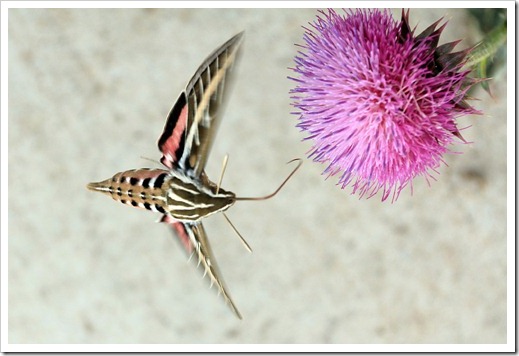 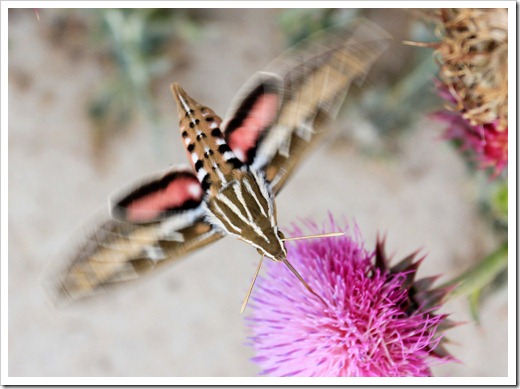 We were so fascinated, we went back today to take some video. We could only find a couple whereas yesterday there had been dozens. But I still managed to capture a brief video showing one in action. 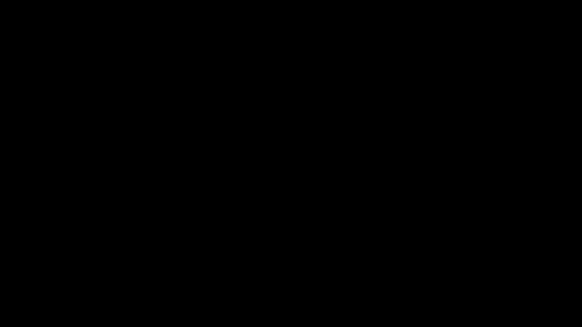 After we finally tore ourselves away from the hummingbird moths, we headed north through the Navajo nation on Indian Service Route 12 and Indian Service Route 32/NM-132 E. From the high-desert scrubland surrounding Window Rock (elevation 6,830 ft.) we climbed at least two thousand feet into dense pine forest just to descend rapidly into a true desert without much vegetation at all. But the rock formations by the side of the road were spectacular. 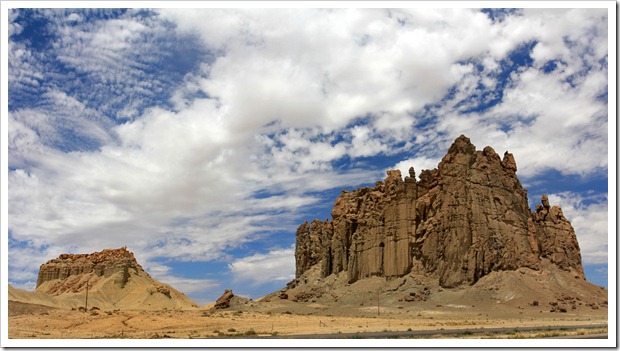 Our next destination was Four Corners Monument, the only place in the U.S. where four states meet—in this case Arizona, New Mexico, Utah and Colorado. 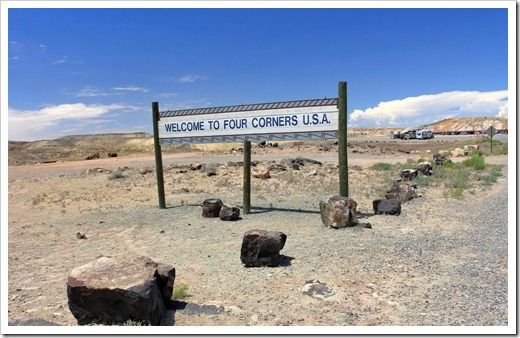 Four Corners Monument is a Navajo Tribal Park and admission is $3.00 per person. I’m sure much of that money is spent on servicing the many portable toilets that surround the actual monument (see below). 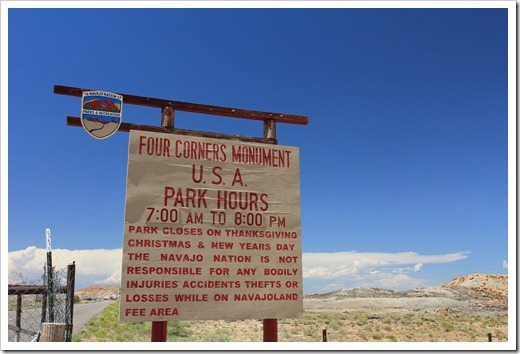 The Monument itself looks like this. People line up to stand in the middle of a plaque that marks the exact spot where the four states meet. Adults usually just stand on top of the small brass marker while children often put each hand and foot in a different state. 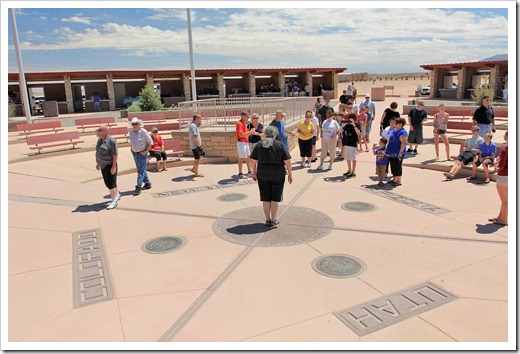 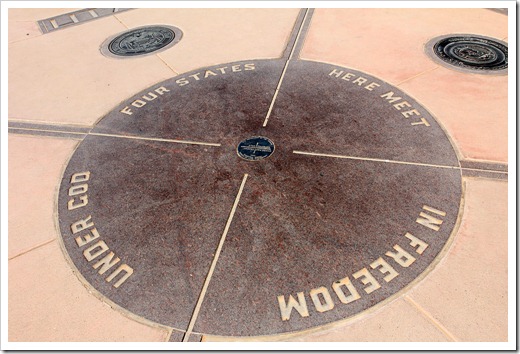 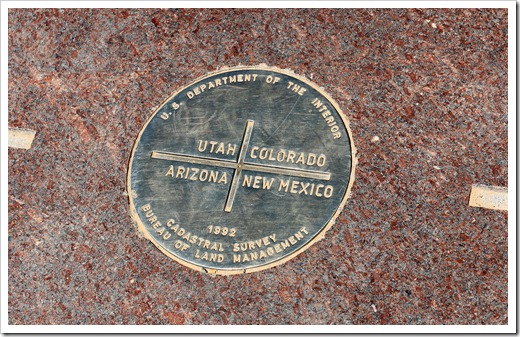 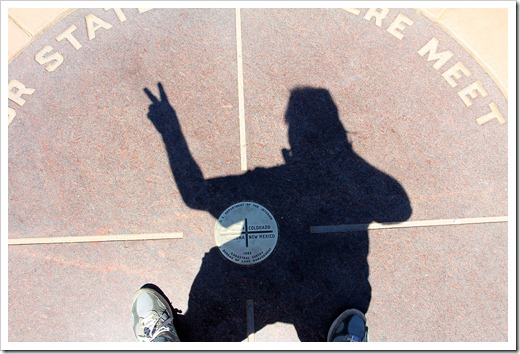 Instead of awkwardly placing each extremity in a different state, I decided to achieve the same effect using my shadow

The landscape surrounding Four Corners Monument is the very definition of a badland. It’s as desolate as can be, and hot. I was standing there looking out over this vast expanse of nothingness and yet I thought it had its own kind of beauty. The rocks had many subtle color variations, not just reds but also greens and grays.

But most visitors can’t wait to get back in their car and leave. 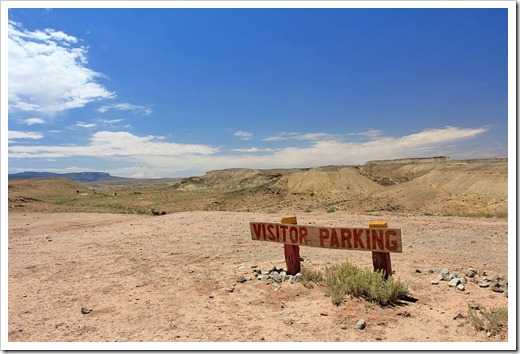 Did I mention there were portable toilets everywhere? 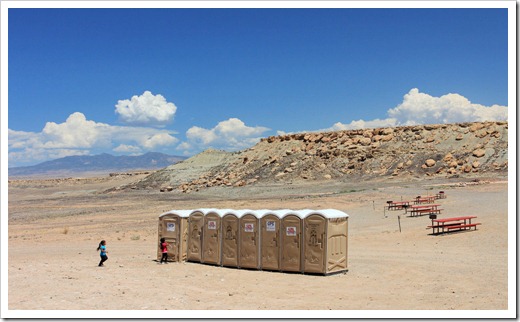 After Four Corners National Monument, we entered Colorado and headed northeast on highway 160 to the small town of Cortez, our home for the night. Cortez is located just a few miles outside of Mesa Verde National Park, which we will visit tomorrow. 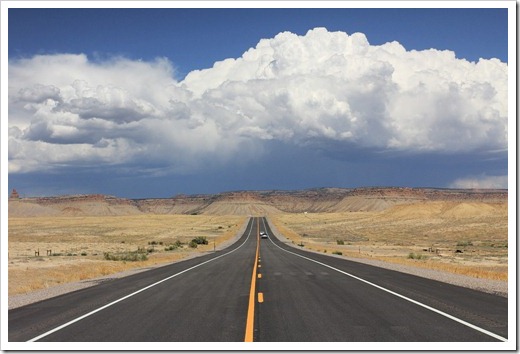 The owner of the small motel where we’re staying told us about a free Indian dance performance at the Cortez Cultural Center and initially I wasn’t too thrilled, expecting something fake and touristy. But we did go, and I’m glad we did.

The dances were performed by a married couple, Norman and Ramona Roach from Gallup, NM. She is Navajo (or Diné), he is Lakota, and they have been dancing in pow-wows for over 20 years. The dances they performed were a mixture of the traditional and the modern, incorporating music and dance elements from different Indian tribes, not just from the Navajo and Lakota. It was exciting to see that there is so much cross-fertilization between tribes, so while the performance we were seeing wasn’t “pure” in terms of belonging to one tribe or style, it was both educational and entertaining. 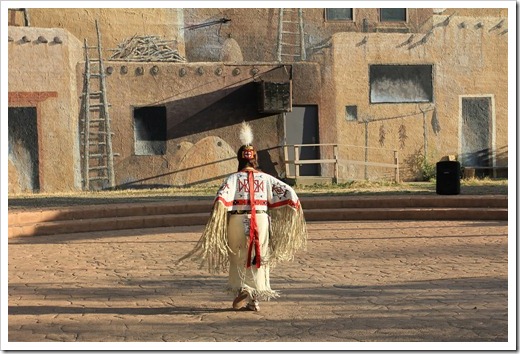 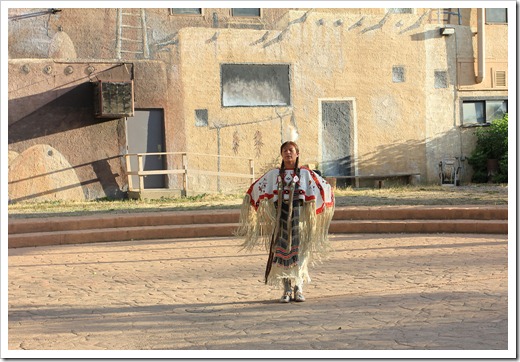 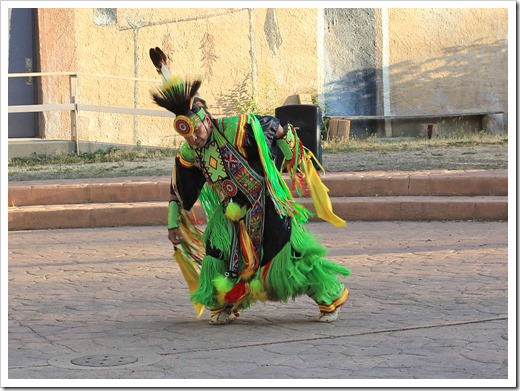 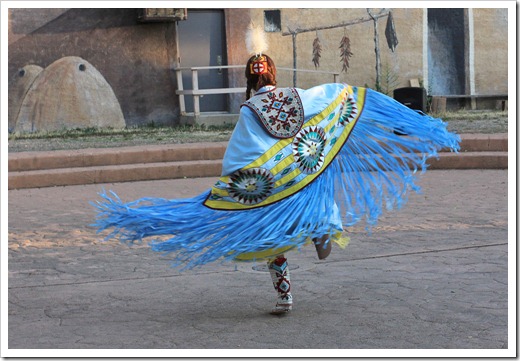