- July 03, 2017
Yolo County, the agricultural area surrounding the cities of West Sacramento, Davis, Winters, Woodland and a few smaller communities, is a world hub for sunflower research and development. This year, sunflower cultivation in Yolo Country is said to be 50,000 acres, double what it was in 2015. Most of the sunflowers are hybrids, bred to exacting standards. They're grown for seeds, which are shipped all over the world and planted primarily for sunflower oil production.

Sunflower fields have been a common sight in our 20 years of living in Davis. However, their location changes from year to year so the uninformed public (i.e. folks like me) never knows where the best spots will be. This year, the Yolo County Visitor’s Bureau has published an official Sunflower Map; that must mean that sunflower peeping is on the rise, and efforts are being made to attract visitors.

I did some sunflower hunting myself on Saturday, and here are some of the images I brought home. 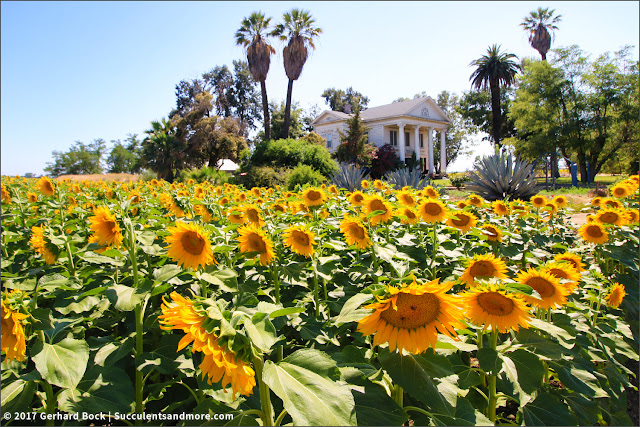 This spot was my favorite. Sunflowers are awesome on their own, but when they're combined with palm trees, a stately old farm house and agaves, the excitement meter hits the red zone.
I tried to do some research on this house, but the only mention I found was in the May 2009 Yolo County Historical Society Newsletter:

With only about 40 landowners along the corridor at any time, it is no surprise that few homes have ever been built here.  The 1908 and 1915 maps show just two-dozen farmsteads along the road and in 2009 there are just 35 dwelling units adjoining Road 27.  And these houses are not a very impressive lot.  This isn’t and never was an area of agricultural mansions.  Today only 2 of the 35 would be called grand or impressive, and one of them – the porticoed Beeman/Bullard house at Road 99 – is on the county’s inventory of historic homes. 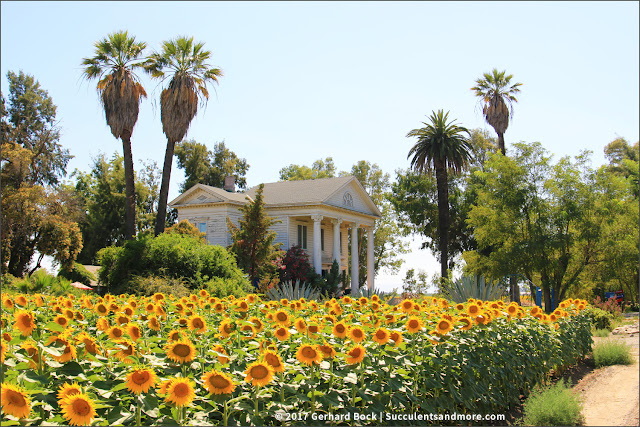 While Woodland itself has quite a few impressive late 19th/early 20th century homes, this is easily the most grandiose house outside the city limits. 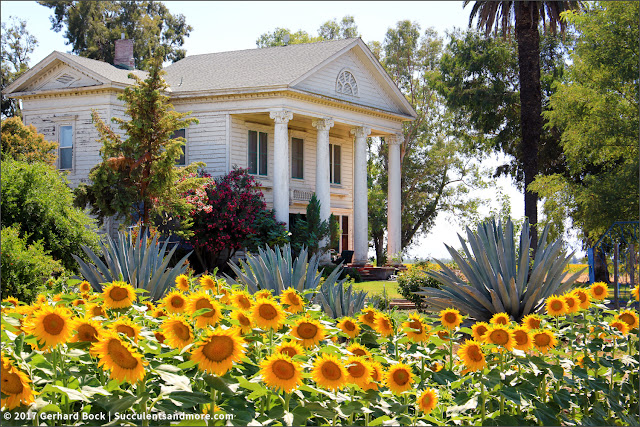 Three large Agave americana are the cherry on the cake: 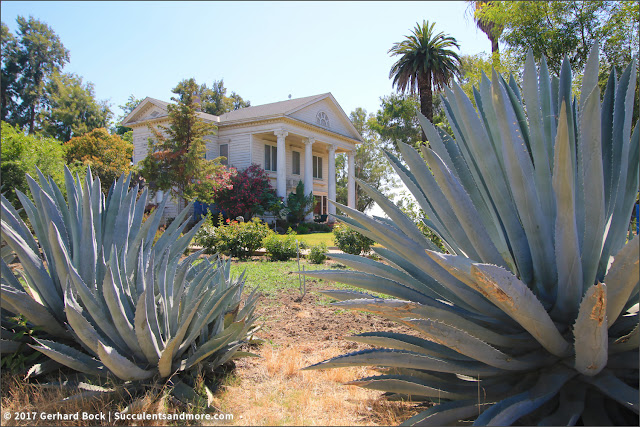 But back to sunflowers. I stopped at several fields, and all I had to do was point my camera at the sunflowers and start shooting. It's difficult to get a bad picture when you're surrounded by thousands of plants. 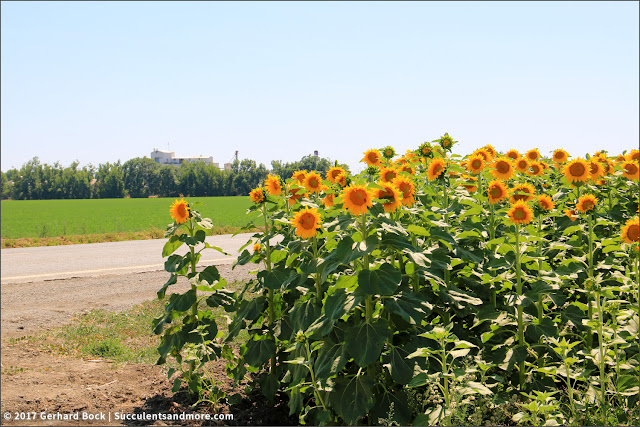 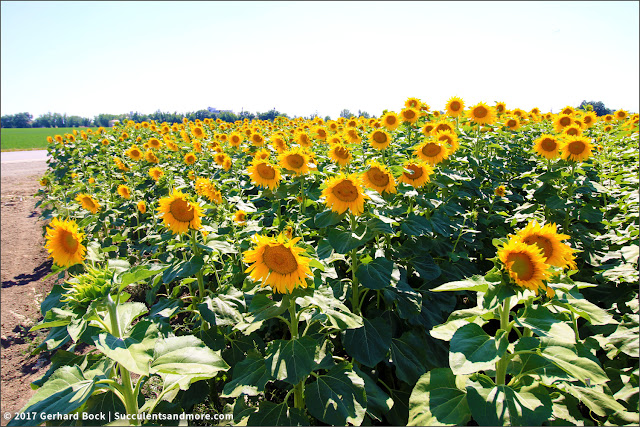 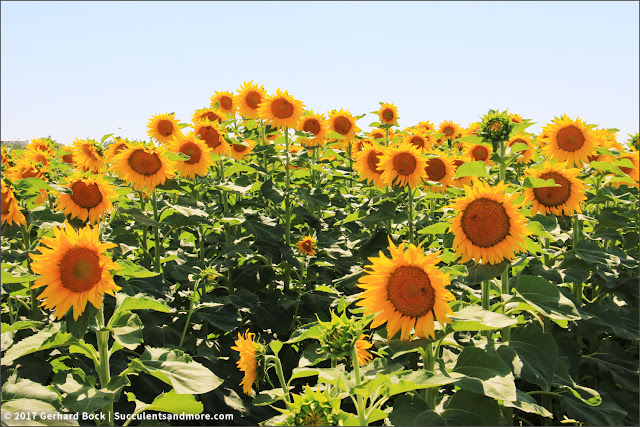 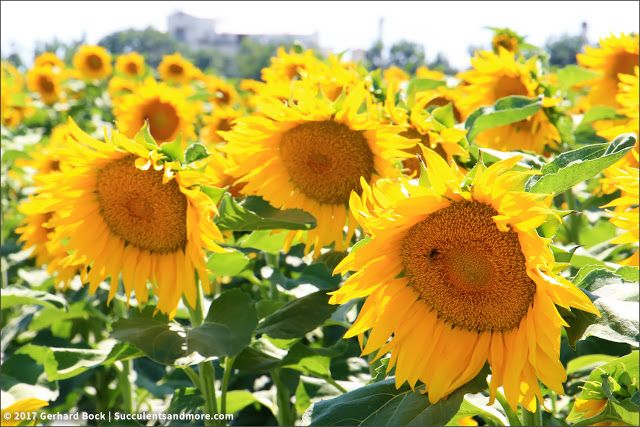 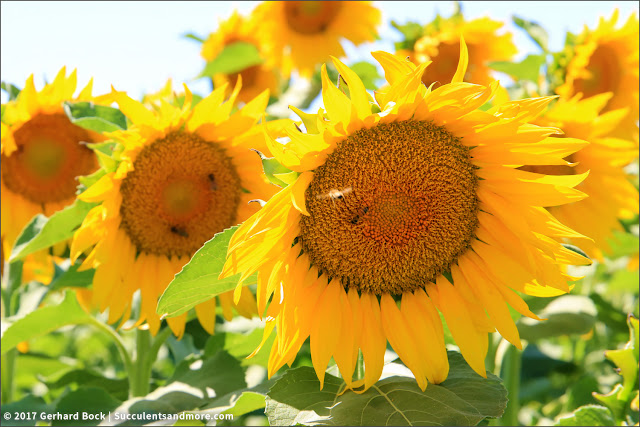 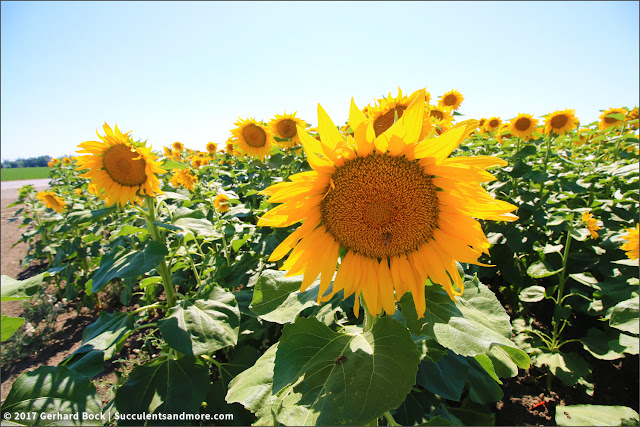 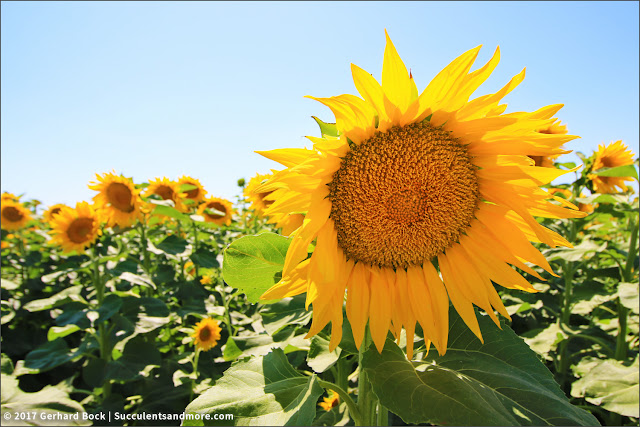 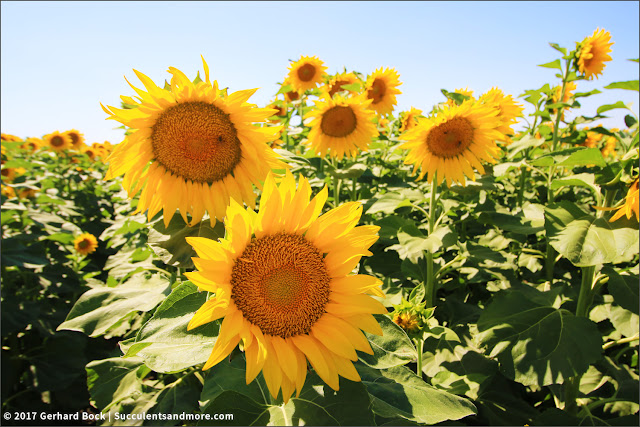 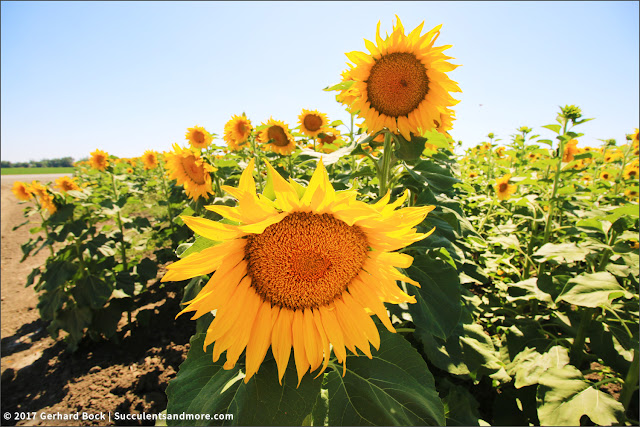 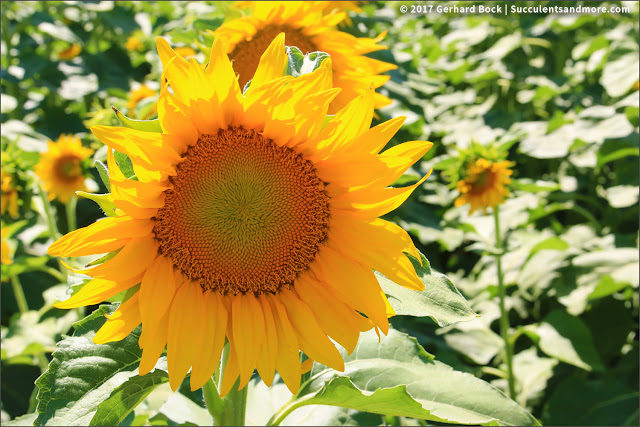 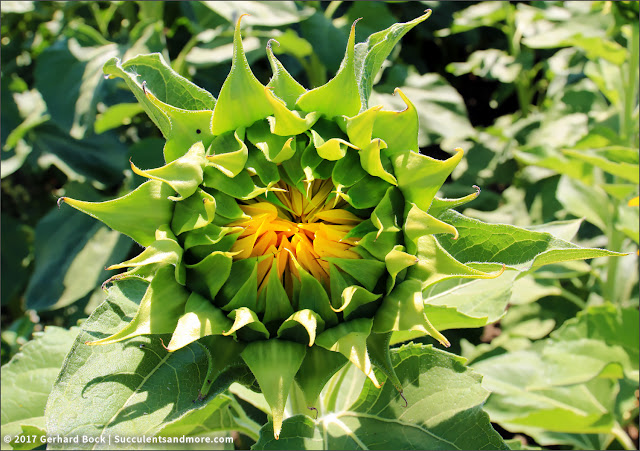 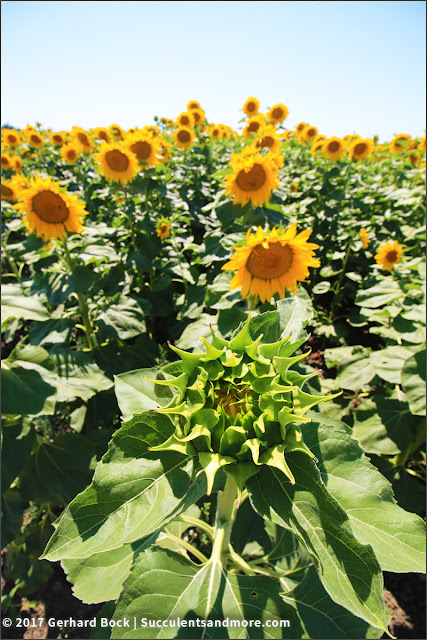 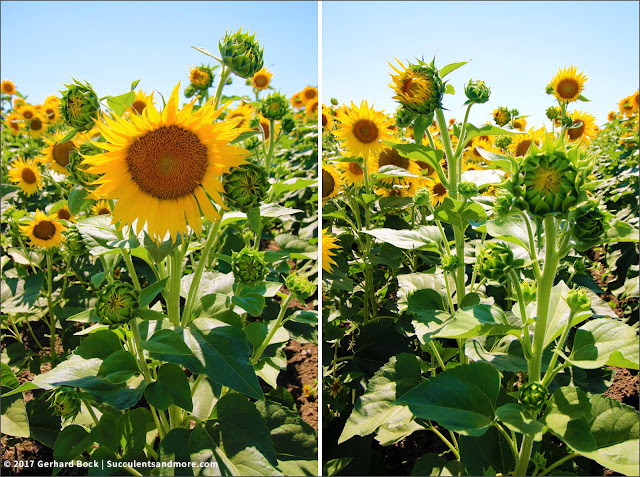 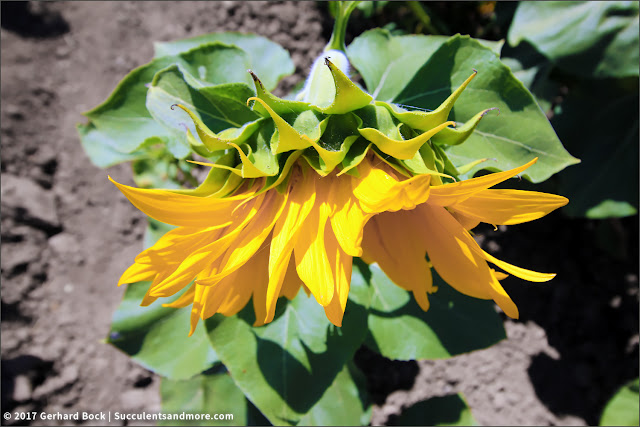 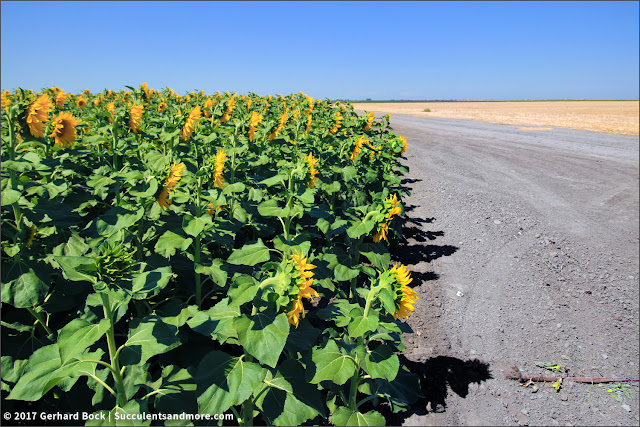 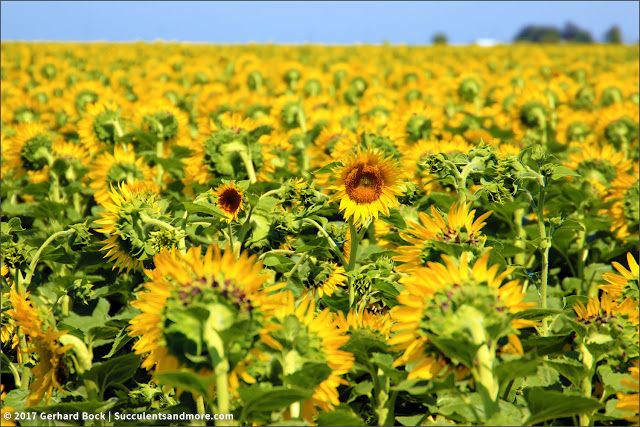 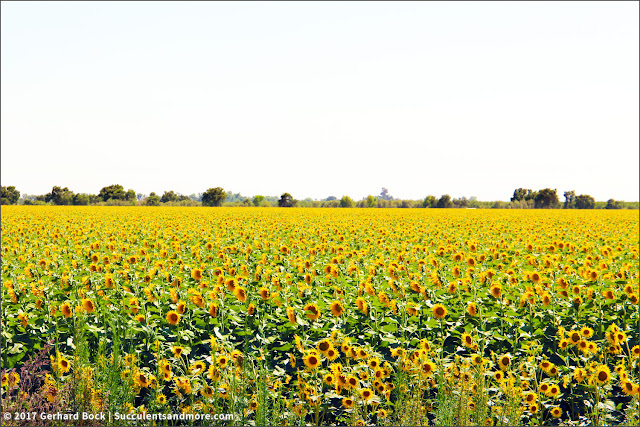 And finally a few fun facts about sunflowers:

1. Sunflowers do turn their heads.

This article sheds new light on heliotropism, the solar tracking behavior sunflowers are well known for:


During the day, the east side of a sunflower stem grows more quickly than the west side, causing flower heads to tilt from east to west. At night, the opposite happens as the stem’s west side grows more quickly than the east, reorienting flower heads to face east at dawn. After sunflowers bloom and reach maturity, their stem growth slows, which restricts flower head movement. Older sunflowers adopt a more permanent position facing east. [...] Advantages of facing east are warmer flower head temperatures, which attracted five times more pollinators than sunflowers facing west.


2. Sunflowers are native to the Americas.

According to Mental Floss, "[sunflowers] were cultivated in North America as far back as 3000 BCE, when they were developed for food, medicine, dye, and oil. Then, they were exported to the rest of the world by Spanish conquistadors around 1500."

3. Sunflower heads can have many, many, many seeds.

According to SpinFold, a "sunflower head is made up of 1000 to 2000 individual flowers which are joined at the base. The large petals which are found around the edge are individual ray flowers, which do not develop into seeds."

Owlcation adds that "according to National Geographic's Edible, some flower heads produce as many as 8,000 seeds."

According to the Guinness Book of World Records, "the tallest sunflower measures 9.17 m (30 ft 1 in) and was grown by Hans-Peter Schiffer (Germany) in Karst, Nordrhein Westfalen, Germany, as verified on 28 August 2014." That's the height of a two-story house!


Nearly six months after the devastating tsunami hit Japan, communities are turning to mother nature to help restore theirs homes and hopes. Millions of sunflowers have been planted in radioactive areas to soak up toxins from the ground and brighten the hillside of Fukashima [sic].

Koyu Abe, chief monk at the Buddhist Joenji temple has been distributing sunflowers and their seeds to be planted all over Fukushima. The plants are known to soak up toxins from the soil, and patches of sunflowers are now growing between buildings, in backyards, alongside the nuclear plant, and anywhere else they will possibly fit. At least 8 million sunflowers and 200,000 other plants have been distributed by the Joenji Buddhist temple. “We plant sunflowers, field mustard, amaranthus and cockscomb, which are all believed to absorb radiation,” Abe says.

This is not the first time sunflowers have come to the rescue in radioactive situations. Many were planted around the Chernobyl site to extract cesium from nearby ponds. Residents of Fukushima today are also experimenting with planting sunflowers next to vegetables in their personal gardens, hoping they will suck up all the toxins and they can begin to grow again.