- July 23, 2017
The final stop on our 4-day jaunt to the Bavarian Alps was a quick side trip to Salzburg, Austria, the birthplace of Mozart and the original home of the Sound of Music's von Trapp family. I had never been to Salzburg but based on what others had told me, I had high expectations.

But before we do Salzburg, I want to take you to Hallein, Austria, a town about 10 miles southwest of Salzburg and an equal distance northeast of Berchtesgaden, Germany. We spent the first night of our trip at the Kolpinghaus in Hallein. It is run by the Kolpingwerk Foundation, one of the largest social organizations of the Catholic church, and provides hostel-type accommodations for students. In the summer (July and August) it operates as a reasonably priced hotel (and no, you don't have to be Catholic or religious to stay there). The Kolpinghaus in Hallein consists of seven multi-story patrician houses originally built in the 1600s. Completely renovated about 10 years ago, the accommodations were unexpectedly spacious and comfortable. Our room was on the 5th floor and offered stunning views of the square in front of the hotel and beyond.

The town of Hallein is fairy small (pop. 21,000) but it's the second largest municipality in the Austrian state of Salzburg, after the eponymous capital. The area was settled as long ago as 4000 BCE and the town was founded in the early 1300s. Today Hallein is best known for its beautifully preserved historic core and for the Silent Night Museum dedicated to Silent Night, arguably the best known Christmas song of all times. It was composed in 1818 by óne Franz Xaver Gruber in a village nearby.


I was surprised by how deserted Hallein was for a Saturday evening. Not that we were complaining; it gave us the feeling of having the town to ourselves. 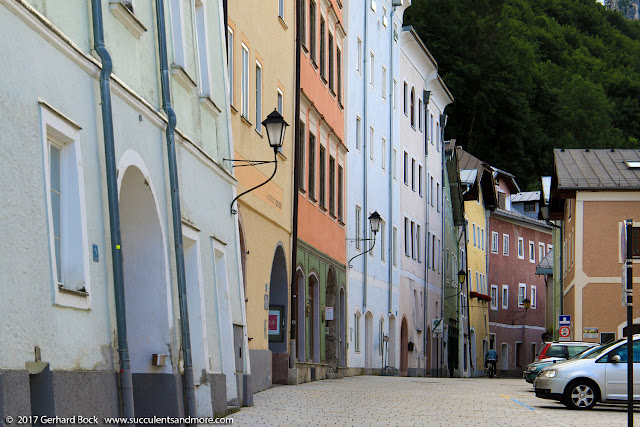 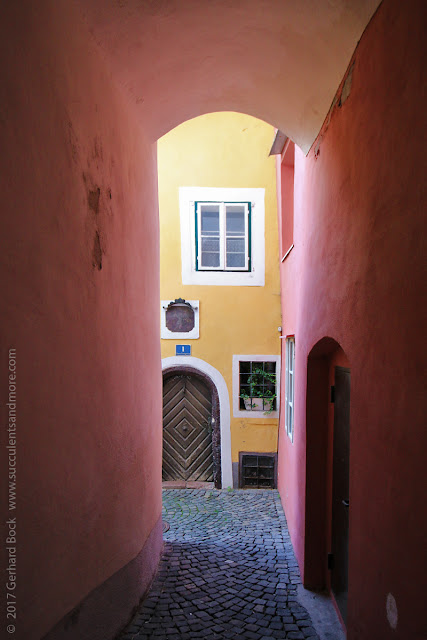 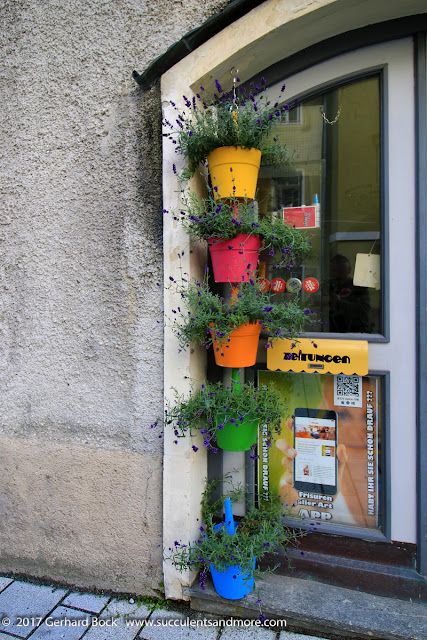 Fast forward now to day 4 of our trip. After spending two nights in an Airbnb rental in Berchtesgaden, Germany, we returned to Austria for a quick visit to Salzburg. Since we only had a few hours and aren't big Mozart fans, we decided to ignore all the Mozart stuff (although, completely coincidentally, we walked both by the house where Mozart was born and the house where he lived later on).

We started our explorations in the Getreidegasse (literally "Grain Lane"), the main shopping street in the heart of the historic Old Town, a UNESCO World Heritage Site since 1996. The Getreidegasse is one of Salzburg's biggest tourist attractions, not only because it's a shopping mecca for those so inclined but also because of the immaculately preserved attached town houses with their wrought-iron signs. (In the old days, the signs indicated which guild a merchant belonged to; today they bear the names of the commercial establishments in any given building.) 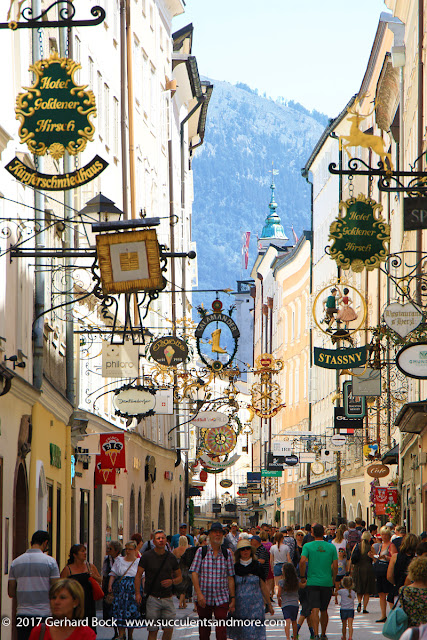 But there's one thing I found just as impressive as the multitude of signs: the sheer number of people milling about. While I suspect the crowds are worse in the summer, I have a feeling Salzburg is never without tourists. 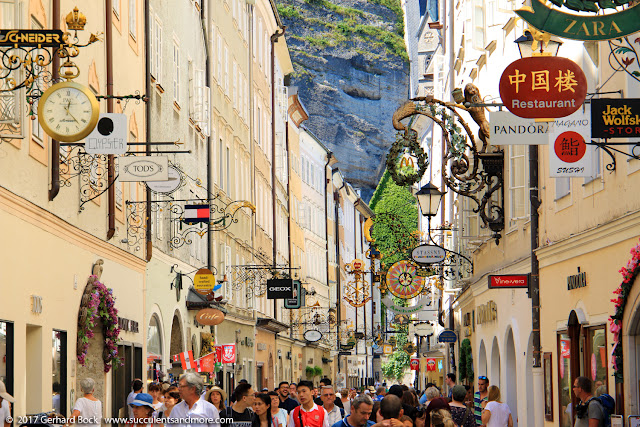 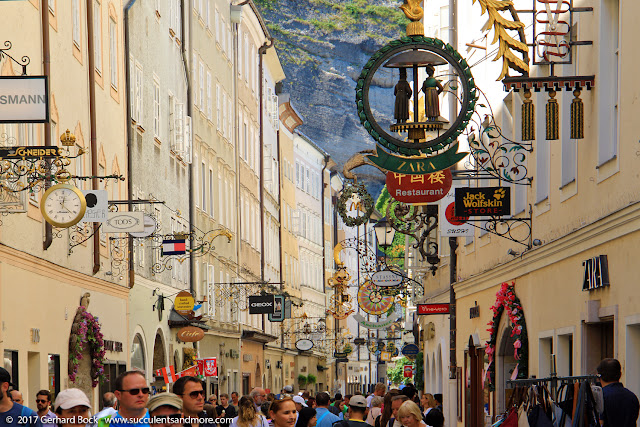 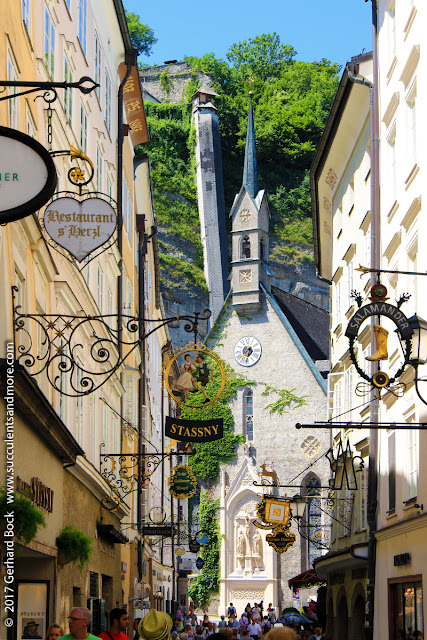 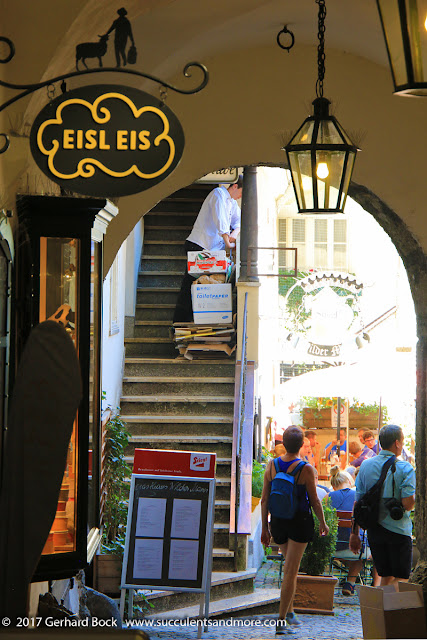 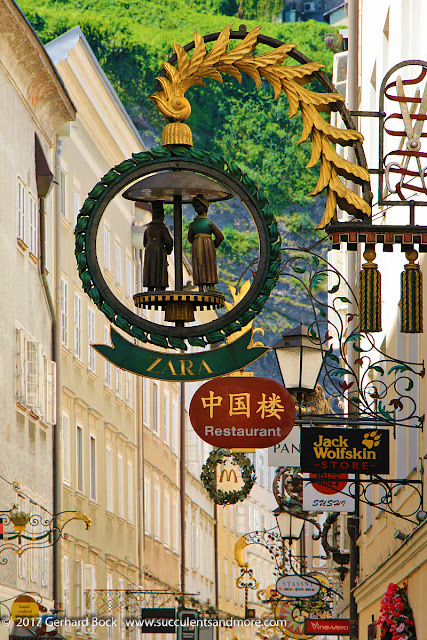 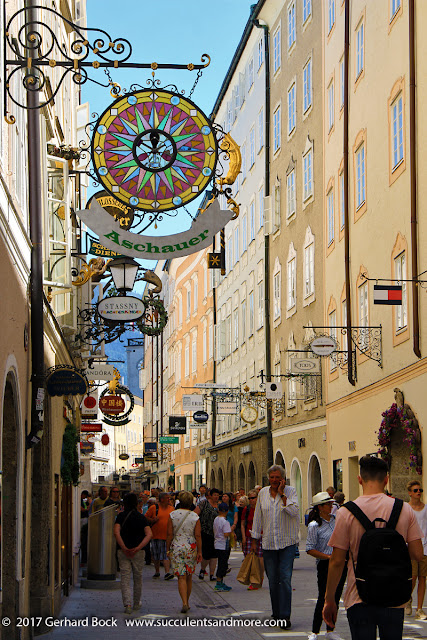 Our original plan had been to look at more sights in the Old Town and then drive up to Hohensalzburg Castle towering above the city, but it was so hot and so humid that day that we just gave up. The fact that we still had a 4+ hour drive ahead of us to get back to my mother's house in Northern Bavaria made our decision easier.

One our way back to the parking garage we crossed the Salzach River on Markatsteg, a footbridge that has become Salzburg's "Bridge of Love" because of the thousands of locks attached to the chain-link fencing. On TripAdvisor, it's ranked #25 of 171 things to do in Salzburg. I've seen locks of love in other places (including the UC Davis Arboretum and on the road to Tofino on Vancouver Island, British Columbia), but never that many. Not everybody is enthralled with this practice, but I had a smile on my face as I walked across the river. 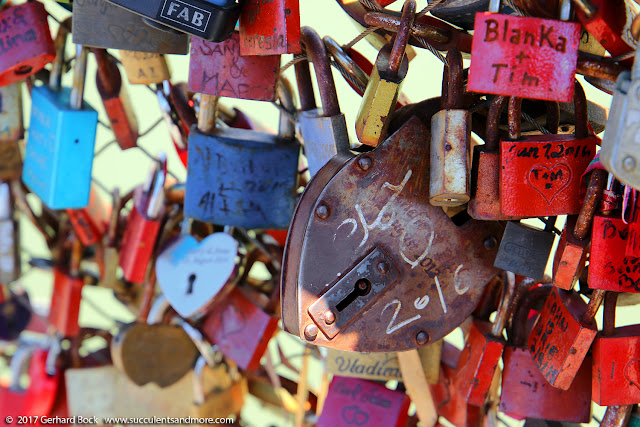 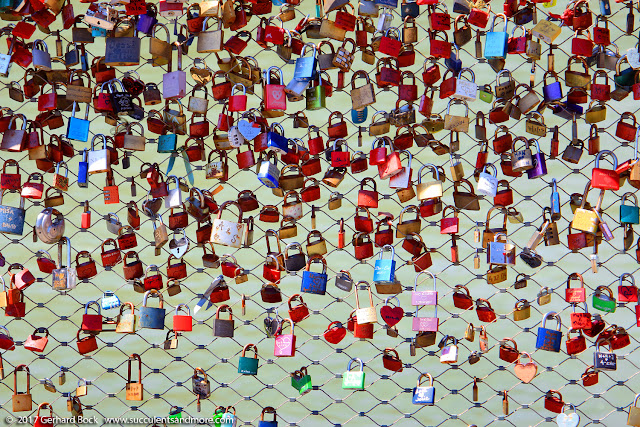 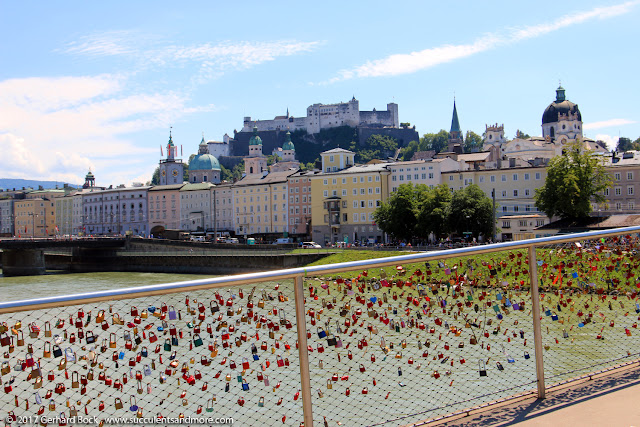 The last photo I took in Salzburg was of a typical pedestrian crossing near our parking garage. Yes, all these people crossed the street on the same green light. Stupendous! 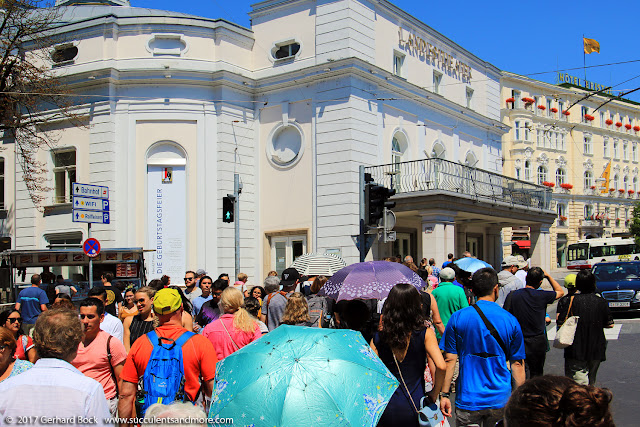 I do wish we'd had more time to spend in Salzburg--and that the weather had been less hot and sticky. As it was, we barely scratched the surface. But at least we have an excuse to go back if the opportunity ever presents itself.

I still want to try a Mozartkugel made from the original recipe by Paul Fürst, the Salzburg confectioner who "invented" it in 1890. His descendants still operate the pastry shop at Brodgasse 13. Insiders say Fürst's original Mozartkugel tastes even better than the mass-market versions by Mirabell and Reber. Which, in my opinion, are mighty fine already (in the U.S. you can find them in places like Cost Plus World Market). 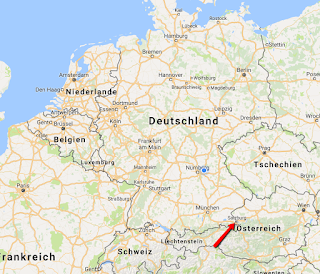