- July 12, 2017
We're in Germany visiting family and are trying to squeeze in as many tourist activities possible, weather permitting. The first couple of days were hot and muggy, with little relief overnight. Nobody has air conditioning, so there's no escaping the oppressive stickiness. Fortunately, a series of rainstorms on night 2 took the edge off, and day 3 was a lot more pleasant, albeit very wet at times. 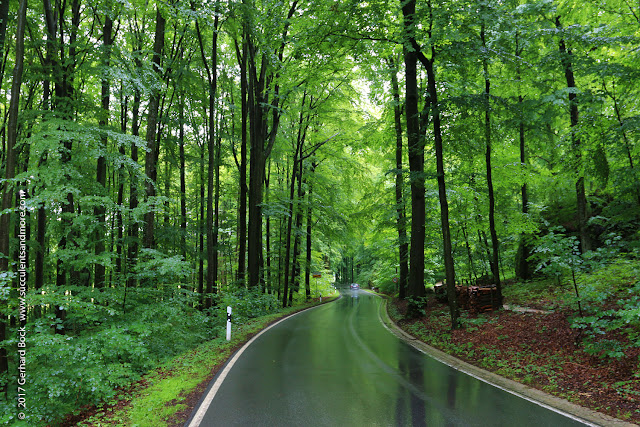 Our destination for the day was the Sanspareil Rock Garden near the city of Bayreuth in Northern Bavaria. It's definitely not what you might think when you hear the word "rock garden." Instead, it's a 35-acre (14 hectare) beech grove which during 1744-1748 was transformed into a woodland fantasy at the behest of Margrave Frederick of Bayreuth and his wife, Margravine Wilhelmina, the rulers of the principality of Bayreuth. As was typical of that age, the ruling nobility had seemingly unlimited funds to build whatever their imagination (or that of their court architects) could dream up.


According to the sign you see below, the name Sanspareil "is said to originate from the reaction of a lady of the court in 1746 who exclaimed: Ah, c'est sans pareil ! (It has no equal.)" 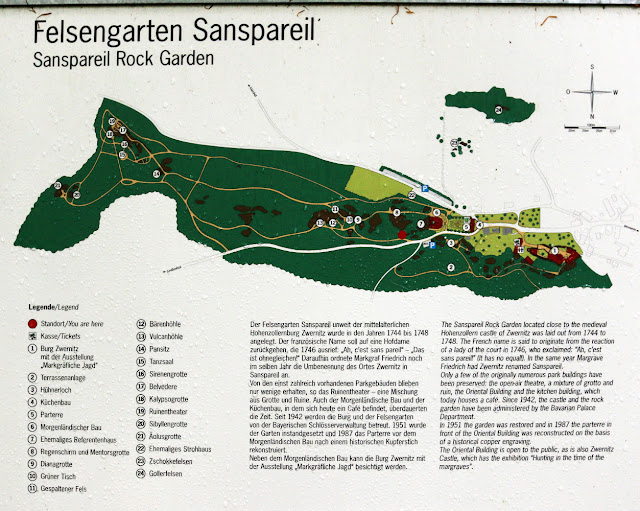 Margrave Frederick first come upon the enchanted beech grove some 20 miles outside of Bayreuth on a hunting expedition, and he liked it so much that he had it transformed into a garden. Court architect Joseph Saint-Pierre drew up ambitious plans that encompassed both natural features, such as the existing rock formations, and man-made structures, some of which were quite exotic:


In spite of the artifice, one main tenet was to build in harmony with nature. Margravine Wilhelmina is quoted as saying that "Nature herself was the architect."

Speaking of Wilhelmina, she was fascinated with the life of Telemachus, the son of Odysseus, who had to overcome many trials and tribulations on his quest to find his father (described in the first four books of Homer's Odyssey), and she designated rocks and grottoes in the forest as stations along Telemachus's journey. (From an early 21st century perspective, the pursuits of the wealthy in the 18th century seem frivolous indeed.) In addition, there was an ambitious literary program that included performances in the open-air rock theater, which is still in existence today.

What did fail, however, were attempts to install ambitious water features throughout the forest. When it became clear that the fountains the Margraves considered essential for the success of their woodland fantasy garden would never become reality, they lost interest in the project.

Sanspareil did remain a popular destination for the rest of the 18th century, but after the last Margrave abdicated in 1791 and Bayreuth became first a Prussian province and then part of the Kingdom of Bavaria, Sanspareil fell into oblivion and disrepair.

It wasn't until after World War II that restorations began. The original wooden structures are long gone. What remains are the open-air theater, the Oriental Building (the residence of the Margraves), and the Kitchen Building (now a charming café where we had an early lunch).

Today, the Sanspareil Rock Garden is an airy beech forest in the country where everyday worries seem as far away as the rest of civilization. We'd experienced torrential downpours on the Autobahn on our way to Bayreuth, but by the time we got to Sanspareil, the rain had stopped. Even though there were several cars at the parking lot, we saw nobody else on the paths. The forest was completely quiet, the only noise from the water dripping from the trees. Walking through the garden was pure magic--magic I hope I was able to capture in my photos. 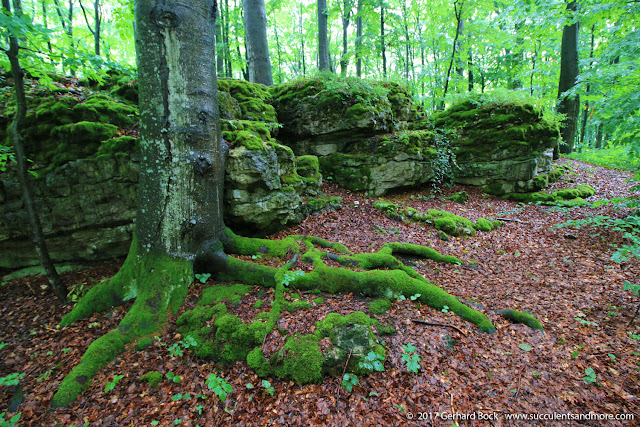 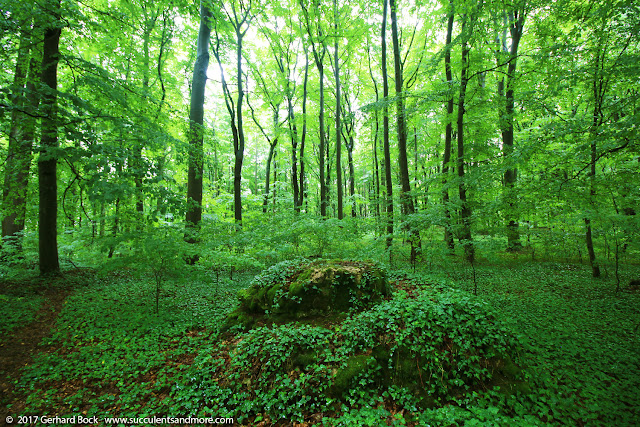 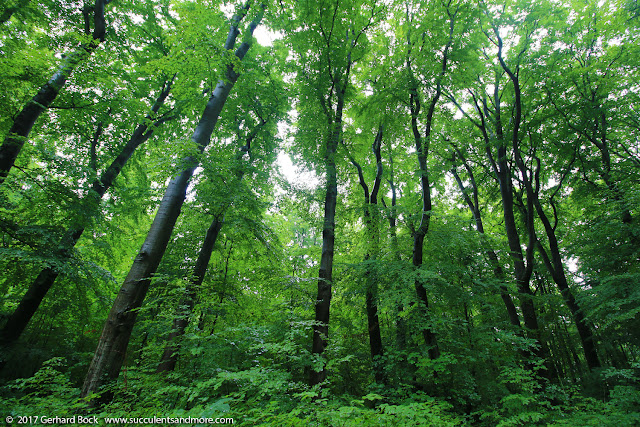 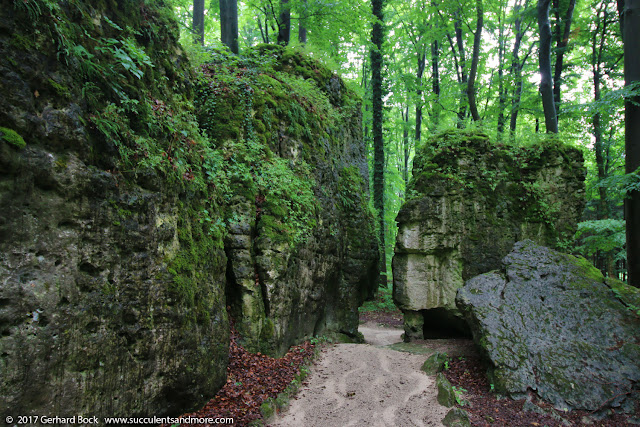 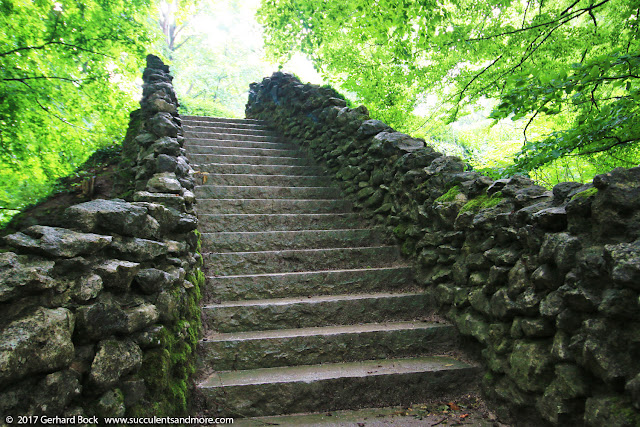 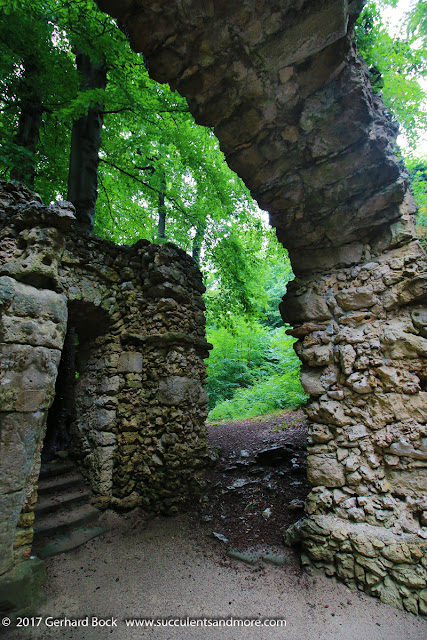 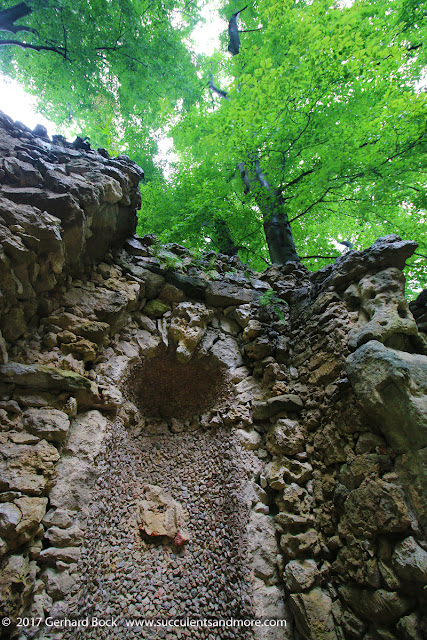 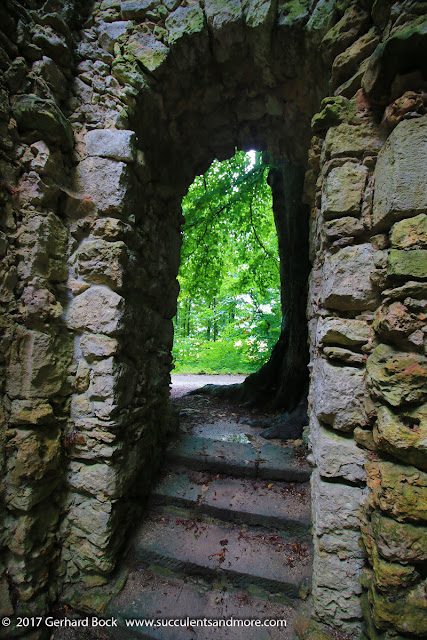 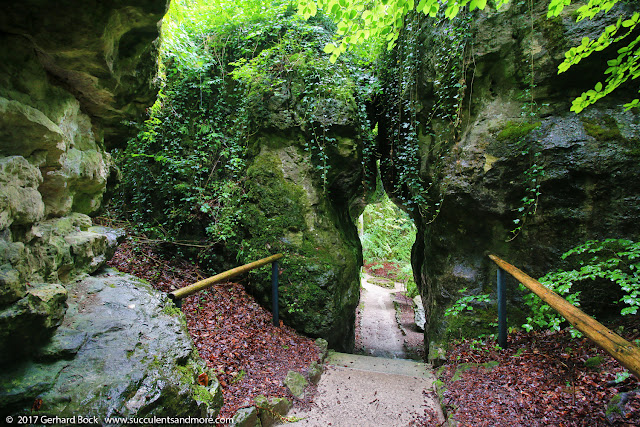 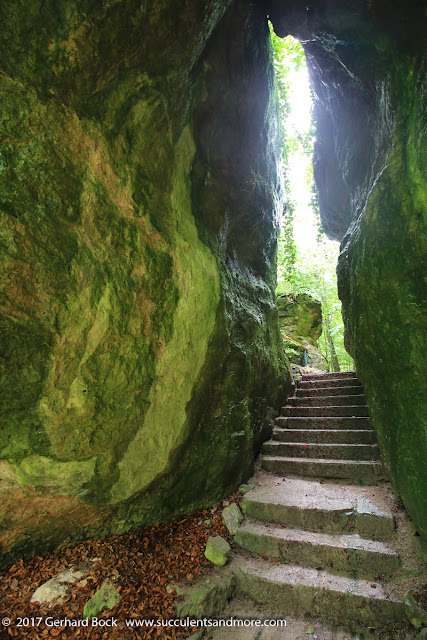 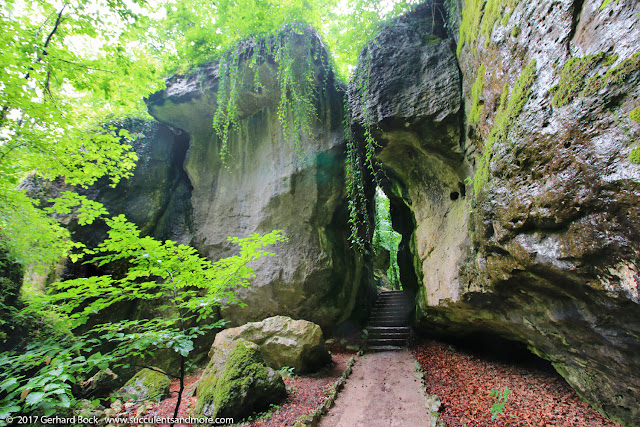 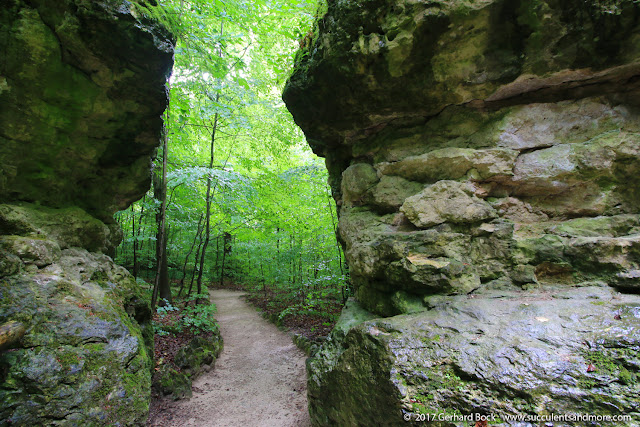 Now we're at the other end of the garden near the parking lot. The building you see below is the Morgenländischer Bau (Oriental Building) where the Margraves stayed when visiting Sanspareil. 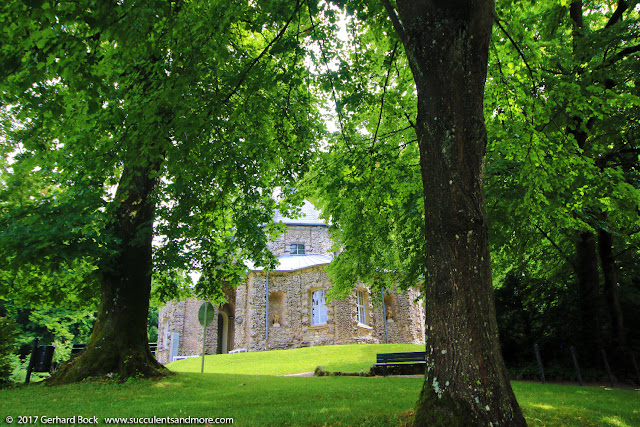 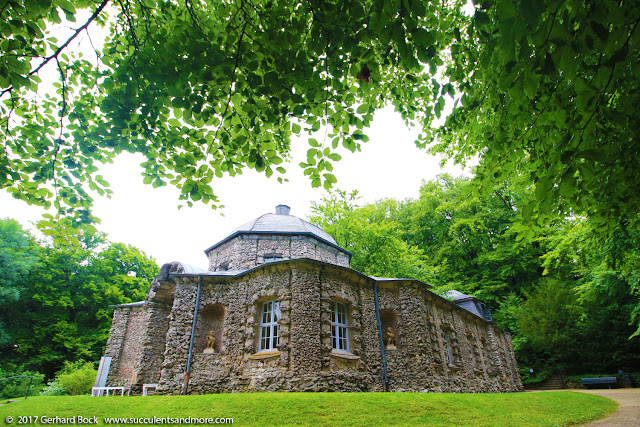 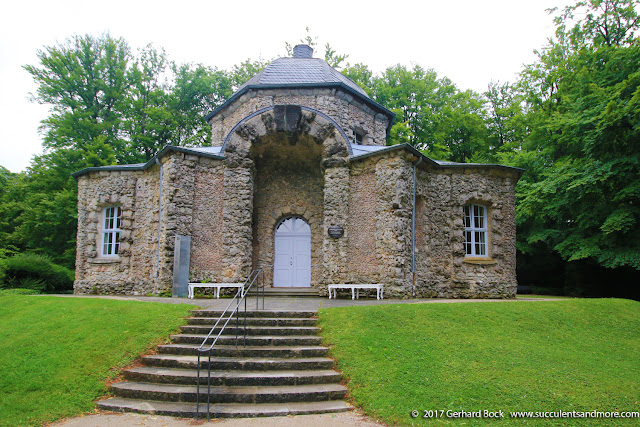 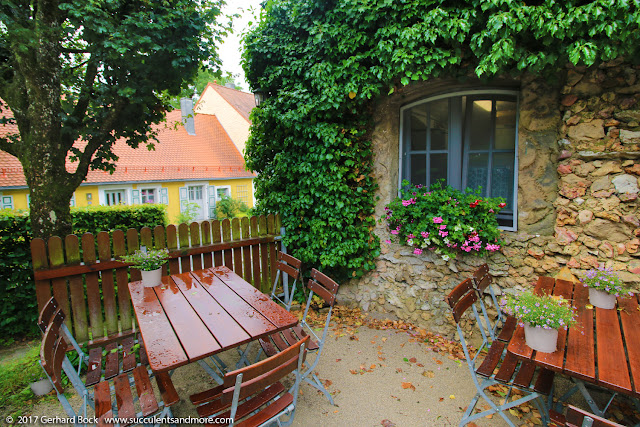 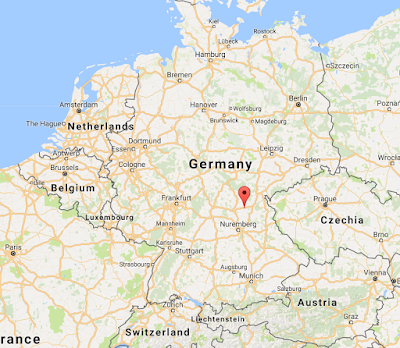