- July 14, 2017
With a population of 510,000, Nuremberg (German: Nürnberg) is Germany's 14th largest city. It's about 20 miles from my hometown, a quick-and-easy 16 minutes by train. It's always been my favorite "big city" in Germany, not only because it's the one I know best, but because the historic city center is so picturesque.

As the site of the Nazi Party's Nuremberg Rallies, the city was a major target for Allied forces in WWII and sustained extensive damage. Many structures were rebuilt, including the main churches in the city center. Today, Nuremberg is an important economic powerhouse, both in industrial production and advanced technologies. In addition, Nuremberg has always been a center of the arts and sciences and is home to major museums such as the Germanisches Nationalmuseum, Germany's largest museum of cultural history, and the Spielzeugmuseum, one of the best-known toy museums in the world.

My favorite thing to do in Nuremberg is to take a leisurely stroll through the city center, taking in the sights, sounds and smells (many stalls sell the famous Nuremberg Rostbratwurst). That's exactly what my family and I did the other day. Here is my photography booty.

The Hauptmarkt (Main Market Square) is a large square in front of the Gothic Frauenkirche (Our Lady's Church). In December, it hosts Nuremberg's world-famous Christmas market. The rest of the year it's home to vendors selling a wide variety of fruits, vegetables, flowers, spices, baked goods, and the like. Yesterday there was even a stall selling sushi.


After leaving the Hauptmarkt, we proceeded to walk up the hill towards the Imperial Castle:

Red geraniums seem to be the official window box flowers in Nuremberg: 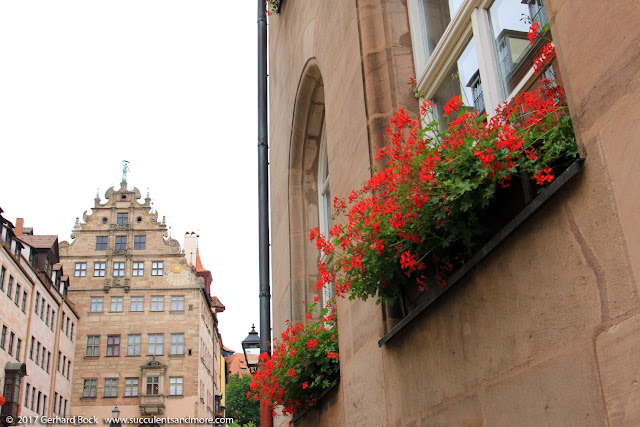 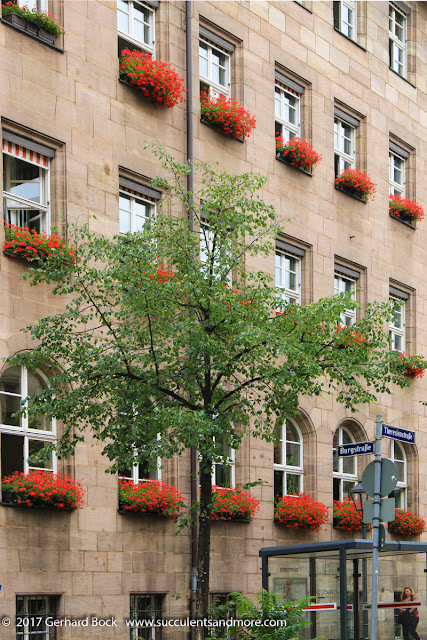 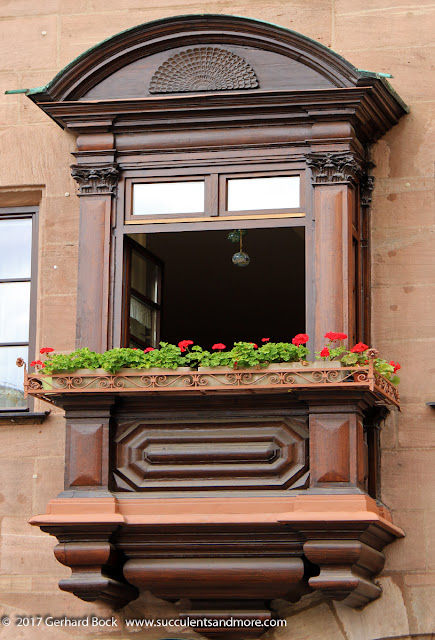 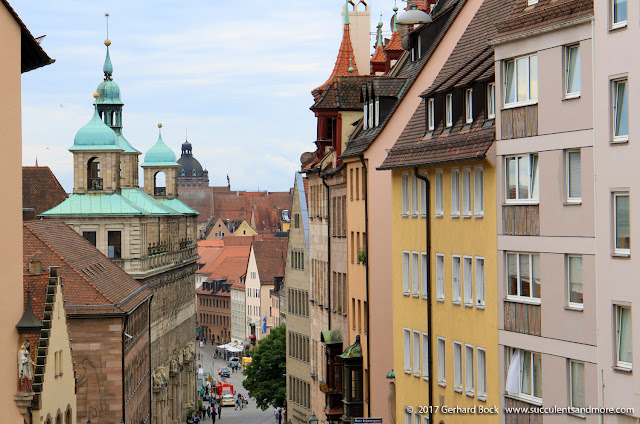 Nuremberg's Imperial Castle is a commanding presence on top of a sandstone ridge in the middle of the city. The beginnings of the medieval fortification can be traced back to circa 1000. The Imperial Castle dates to 1138-1254. Wikipedia has a great aerial photo that shows the entire complex. 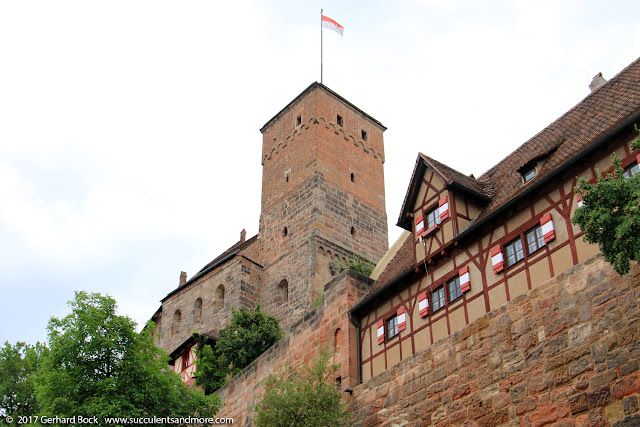 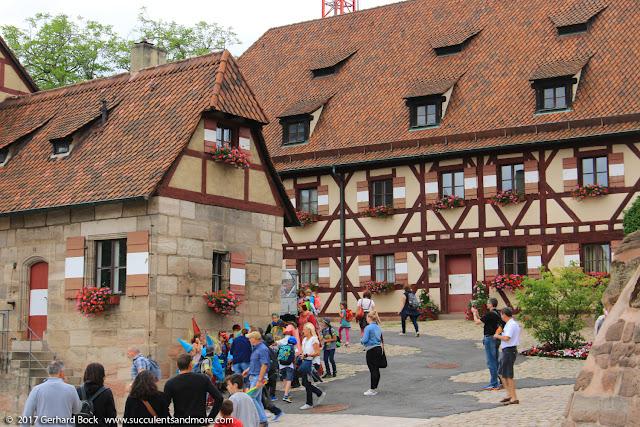 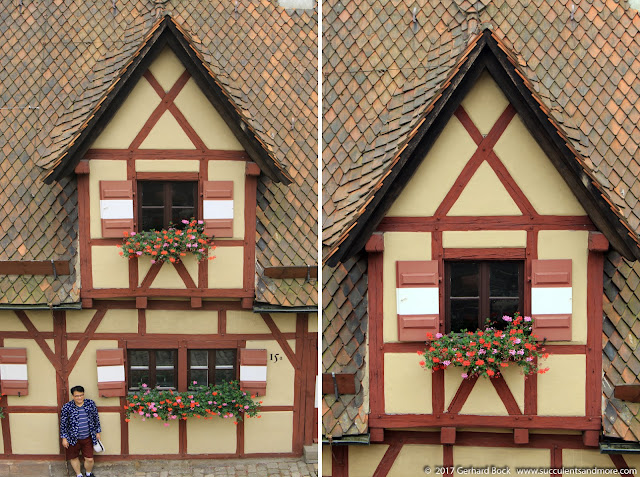 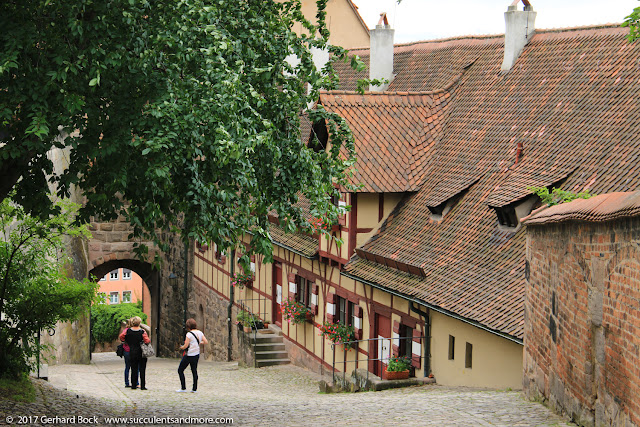 The area just below the Imperial Castle is home to many traditional timber-framed houses: 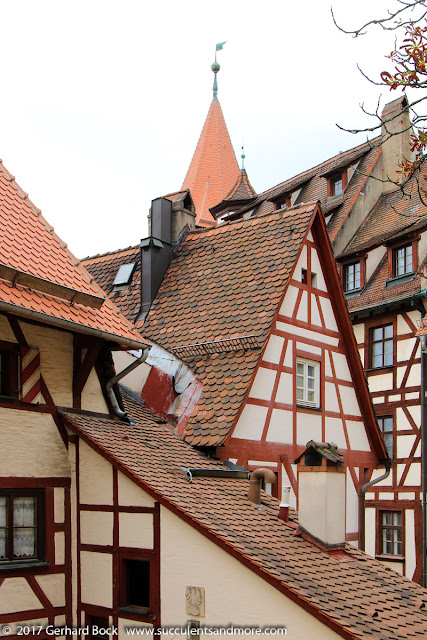 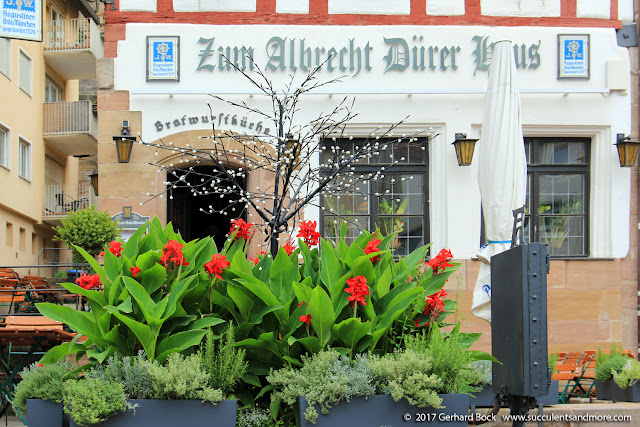 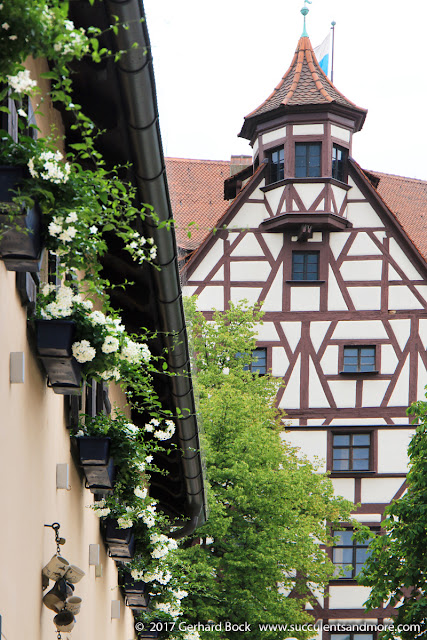 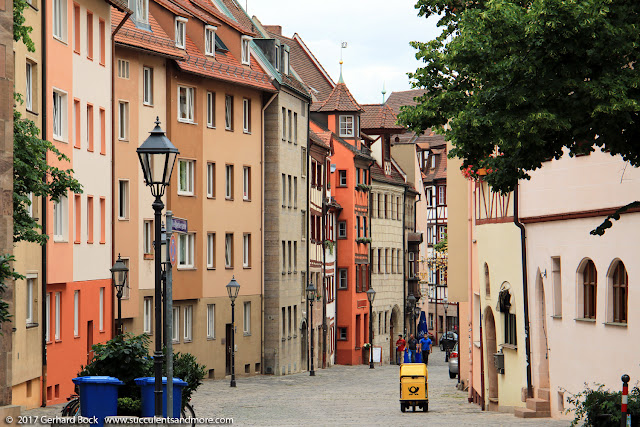 Now we're back in the pedestrian zone:

My favorite public art piece in the pedestrian zone is the Ehekarussell, a large fountain created between 1977 and 1981 by German sculptor Jürgen Wegner and installed in 1984. Six scenes show the ups and down of marital life--from courtship to the bitter end. When the Ehekarussell was first unveiled, it caused quite a stir. Many considered the depictions to be coarse and vulgar. Others, myself included, think they're humorous and, in the case of some relationships, not far off the mark. 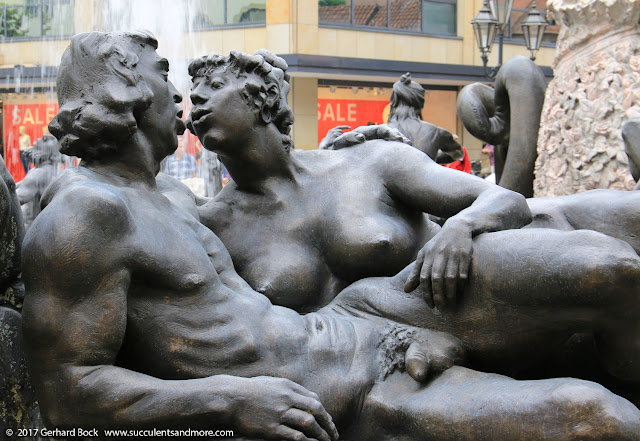 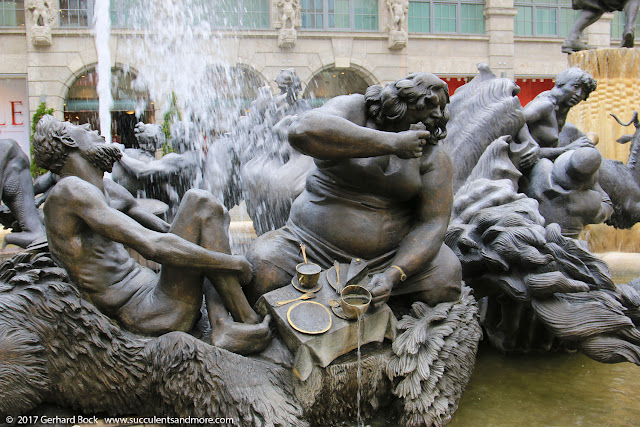 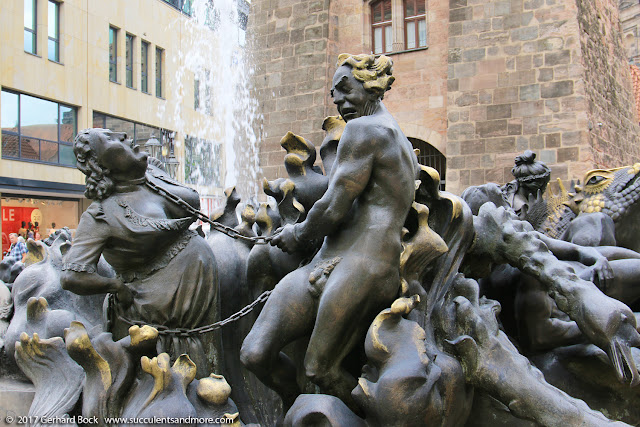 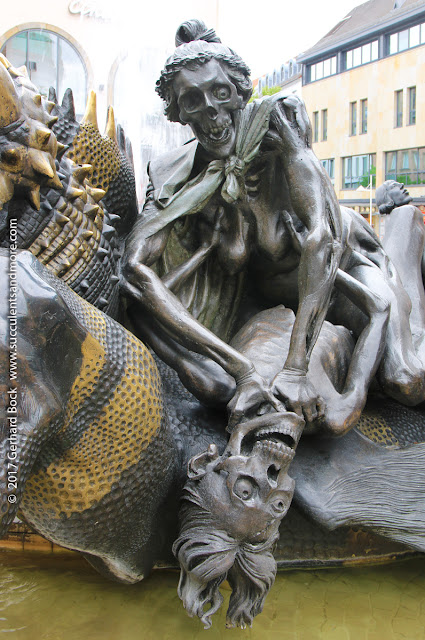 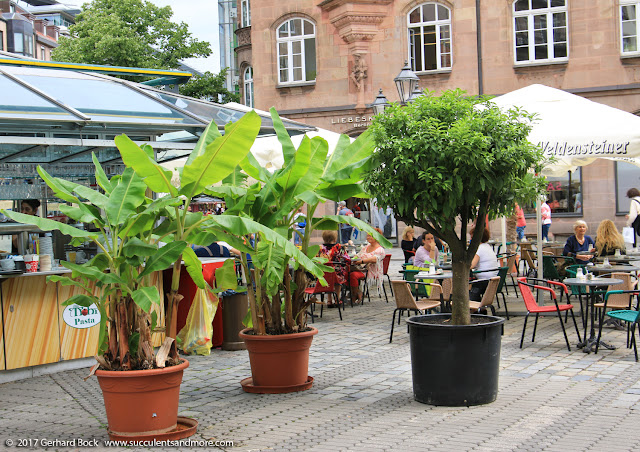 My favorite church in Nuremberg is the Lorenzkirche (St Lawrence Church), which dates back to the early 1400s: 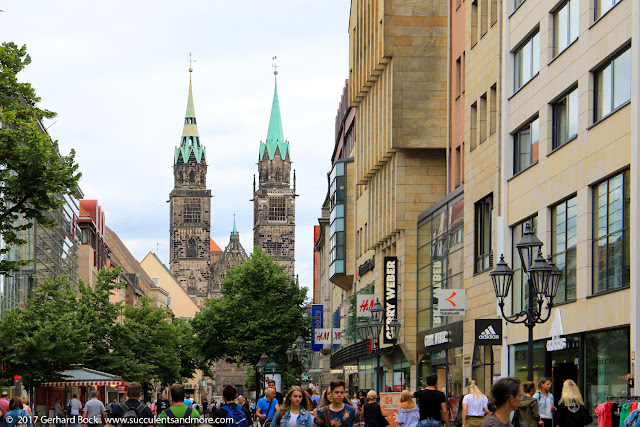 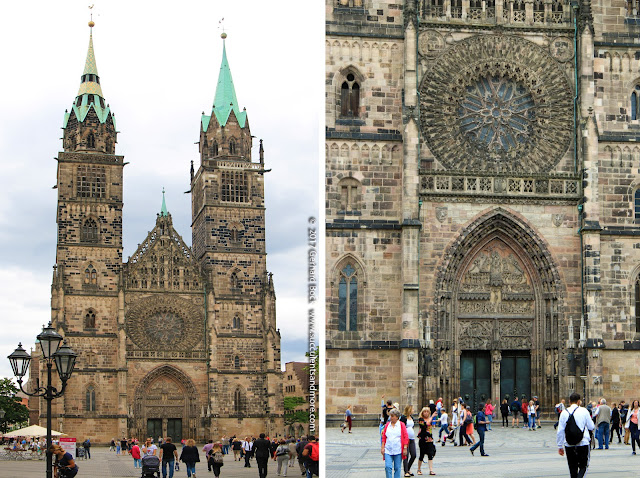 The church was heavily damaged in the WWII and then meticulously restored. It was one of the first churches in Germany to become Lutheran (in 1525). The interior is stunningly beautiful. 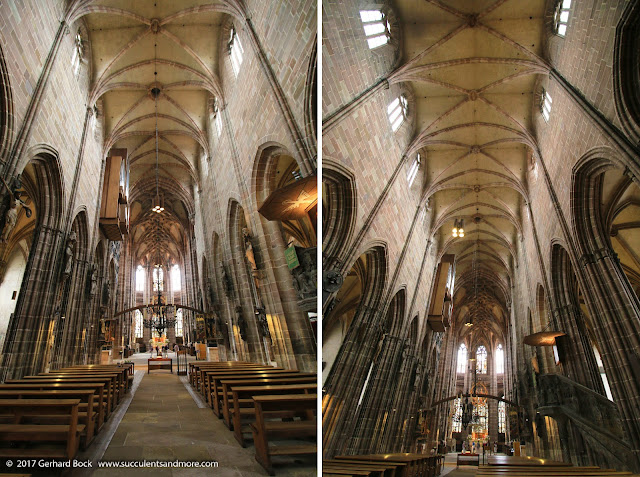 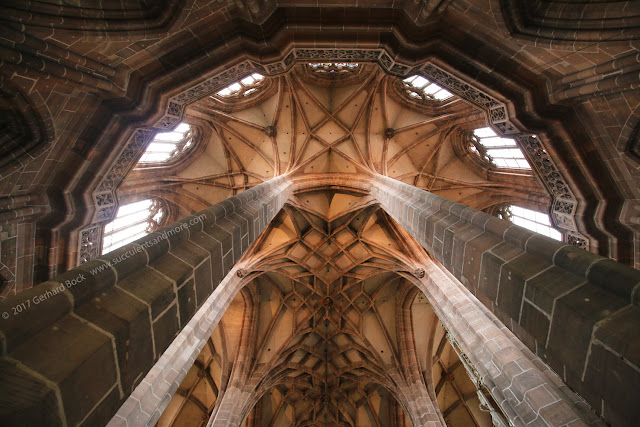 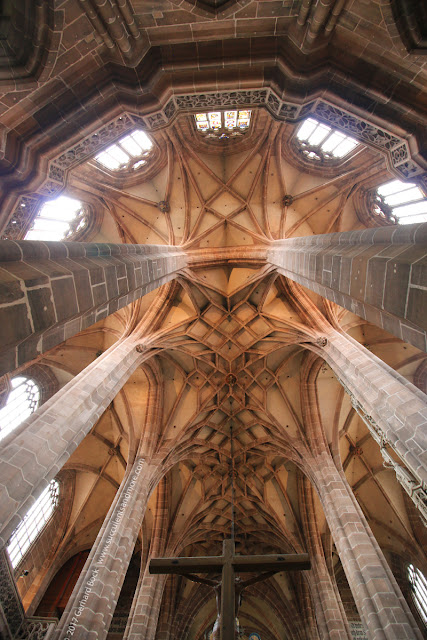 One our way back to the main train station, we made a quick stop at the Handwerkerhof, a collection of restaurants and shops selling local arts and crafts. This is one the best places in Nuremberg to buy high-quality souvenirs although the typical tourist junk mass-produced in China has made inroads here as well. 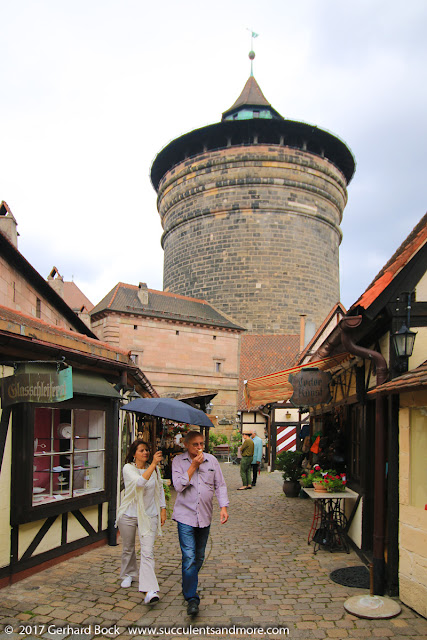 And one final picture postcard, this time showing red and white impatiens instead of geraniums: 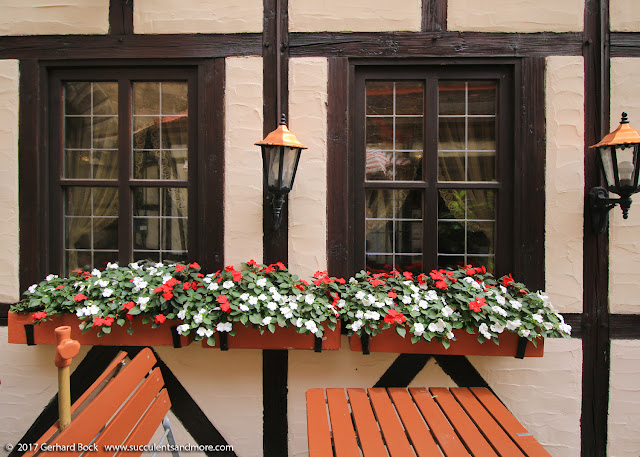 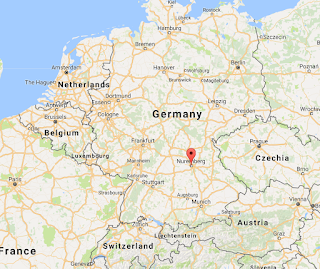