- March 17, 2017
Last week, one my favorite blogs, Piece of Eden, talked about Amaryllis vs. Hippeastrum and showed a beautiful photo of Hippeastrum papilio, the butterfly amaryllis. I left a comment saying that I planted a few bulbs years ago, and while the clump had gotten bigger, there had never been flowers.

The next morning I happened to look at the mass of strappy leaves from my Hippeastrum papilio, and this is what I found: 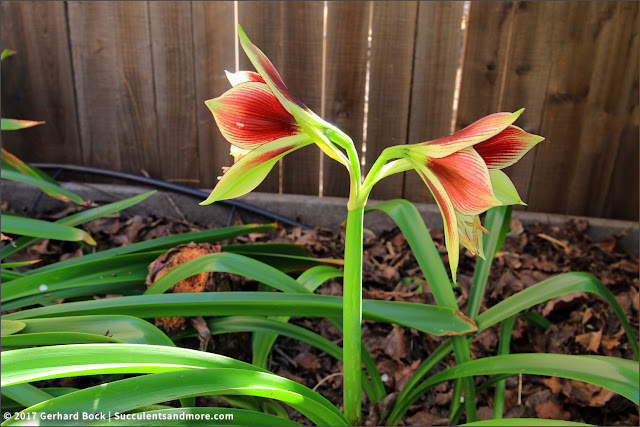 You can imagine how surprised I was! This raised bed is tucked away off to the side of the front porch. It's been neglected for a while and I don't routinely look there for exciting plant discoveries.

The flowers are truly magnificent. Large and so intricate. 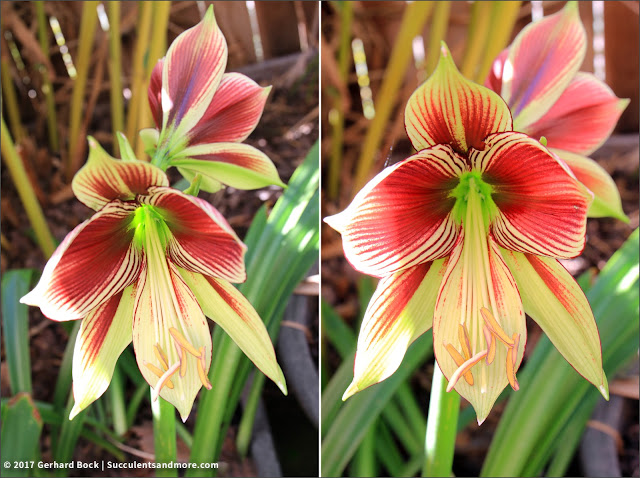 I was going to spend some time this weekend photographing them properly, but unfortunately, they're done blooming already. Just a week of floral splendor! Even so, the wait was worth it. This is the probably the most beautiful flower I've ever had in our garden.

I don't know why my butterfly amaryllis bloomed this year. Maybe this one bulb was finally large enough, or maybe it finally received enough winter water. Unless they're dormant, hippeastrums want water year round.

Here's a quick summary of the amaryllis vs. hippeastrum thing. Originally, there was only one genus Amaryllis. It included both the real amaryllis (native to Africa, with only two recognized species, one of them being Amaryllis belladonna, the populary naked lady) and the hippeastrums (a large genus from South America). The latter were split off from the true amaryllis in 1821. Today, the "amaryllis" that decorate so many windowsills in the winter are actually hippeastrum hybrids.

Hippeastrum papilio is a native to the tropical rain forests on the Atlantic coast of southern Brazil where it lives an epiphytic existence in trees. Due to deforestation and urbanization, all that's left in the wild is a tiny population of about 50 plants. Fortunately, this species has proven to be easy to grow in cultivation, and because it has such striking flowers, it has been become much sought after. Even though it's a tropical plant, it can take a bit of frost (mine have been lost their leaves in the winter).

I'm still thrilled that my butterfly amaryllis finally flowered. It was the biggest surprise of 2017 so far. Who knows what other wonderful things might happen this year?
bulb flowers