- March 12, 2017
I would never have known about the Jurupa Mountains Discovery Center (JMDC) on edge of Riverside if it hadn't been for my friend Luisa. She lives 45 minutes from there and loves the place. It turns out the many locals don't know about the JMDC either although they're familiar with the giant mammoth figure on the hillside off the 60 freeway. 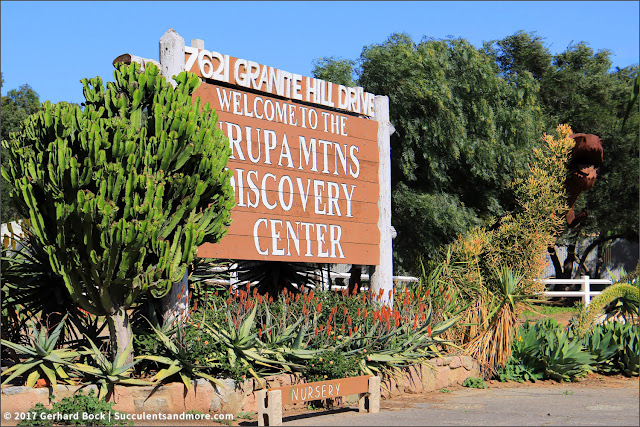 The mammoth may be the JMDC's calling card but it's not the only giant sculpture. There are dinosaurs aplenty. I don't know the exact story of how they came to be, but not surprisingly, they're very popular with kids. And the JMDC has a range of programs and activies that appeal to this core group, including school programs (in 2014, 9000 school children visited the JMDC on field trips). A small but excellent Earth Science Museum features fossils, Native American artifacts, minerals and dinosaur eggs, many collected in the Inland Empire. 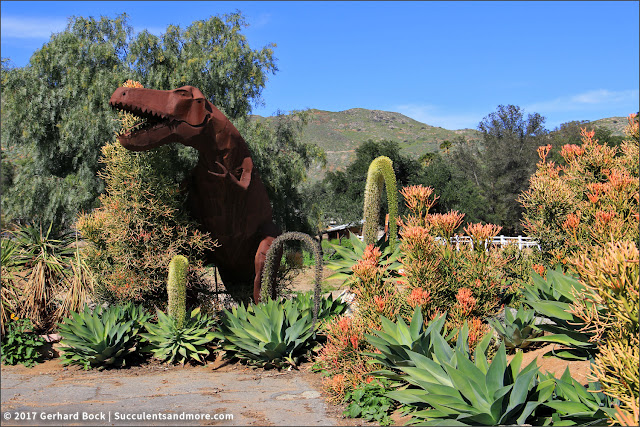 As whimsical as the dinosaurs are, the main attraction for me were the gardens. And as you can see right at the entrance, where the first set of photos was taken, it's all about succulents.

Dinosaurs and succulents combined do make for interesting snapshots. Where else can you see a dinosaur towering over Agave attenuata or hiding behind a 10 ft. tall Euphorbia tirucalli 'Sticks on Fire'! 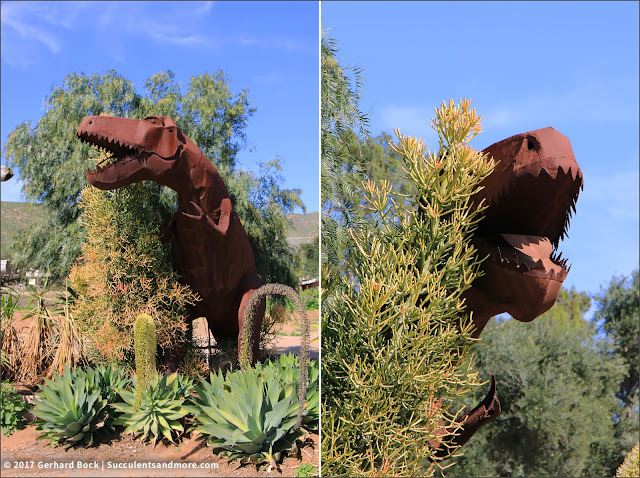 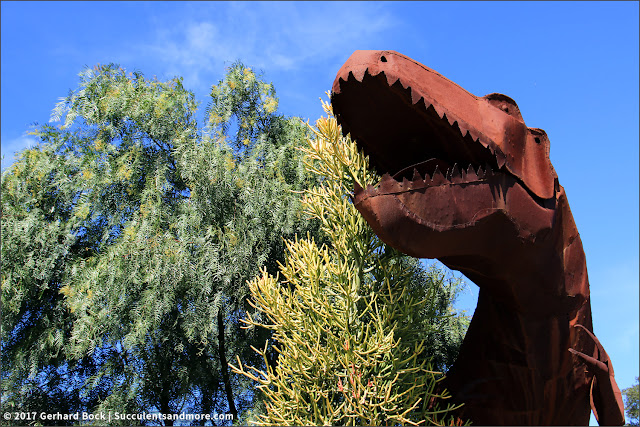 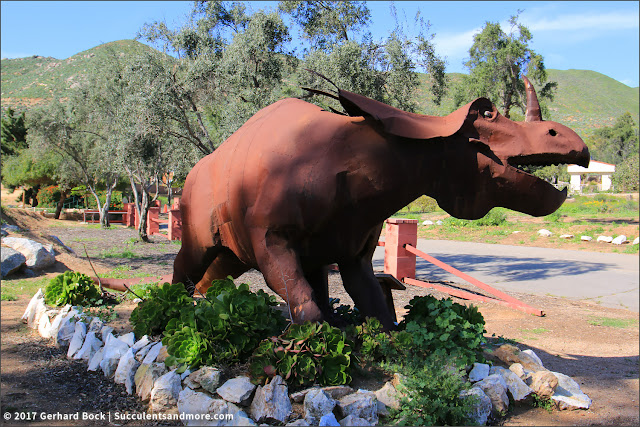 The JMDC is huge (82 acres) but most of it is hillsides left in their natural state. The 6-acre succulent gardens are near Granite Hill Gardens Nursery. It's easiest to park in the nursery parking lot because I'm sure you'll want to buy a few things before you leave. (More on the nursery below.)

I wasn't able to find any definitive information on the history of these gardens, but Luisa thought they were planted by local succulent enthusiasts in the 1960s and 70s. The gardens are roughly divided into Old World (South Africa and Madgascar) and New World. There are no labels and just a few paths. And aside from a handful of other visitors, Luisa and I were alone to explore these beautiful plantings. (The lack of visitors might be because we were there on a Thursday afternoon.) 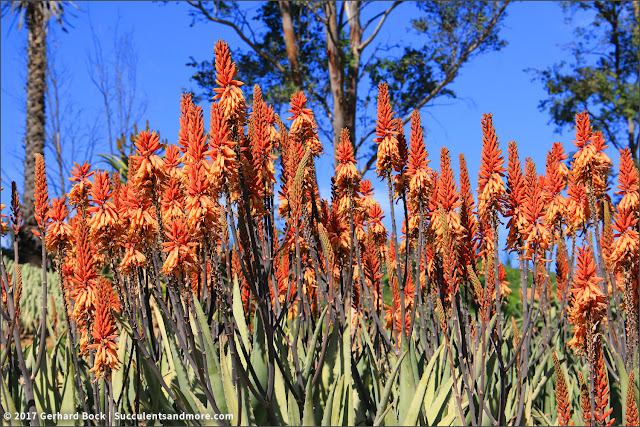 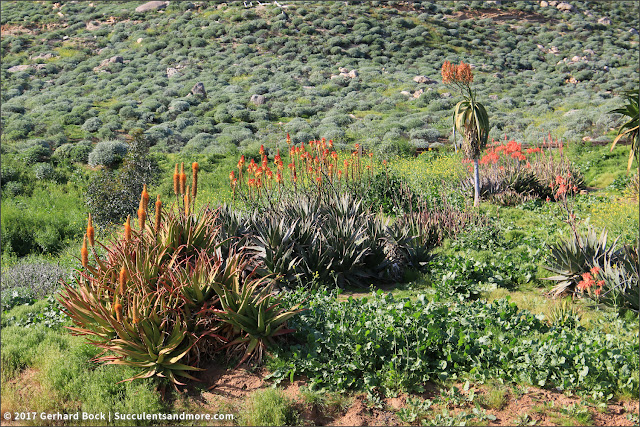 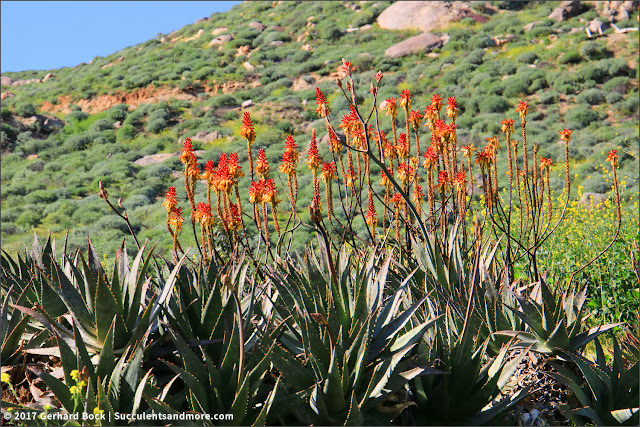 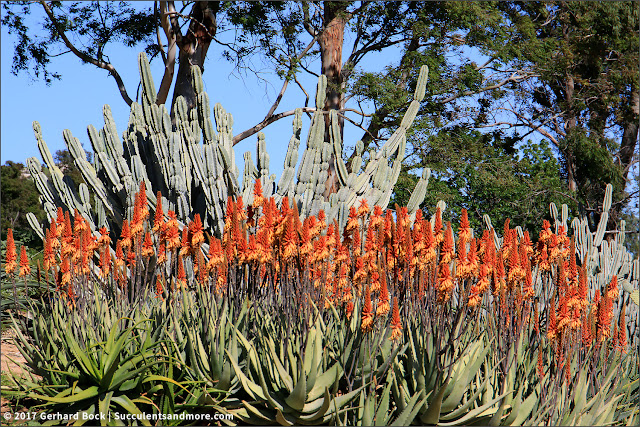 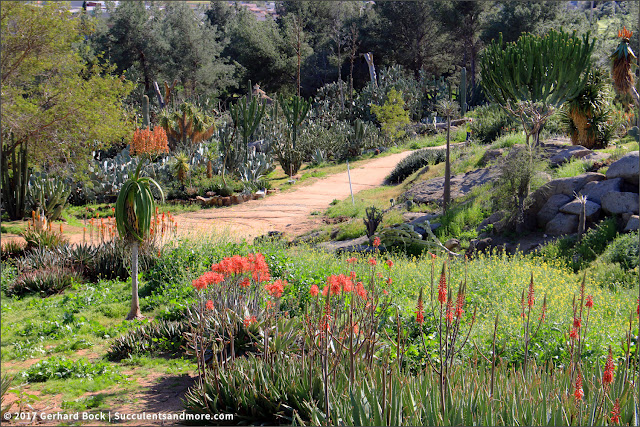 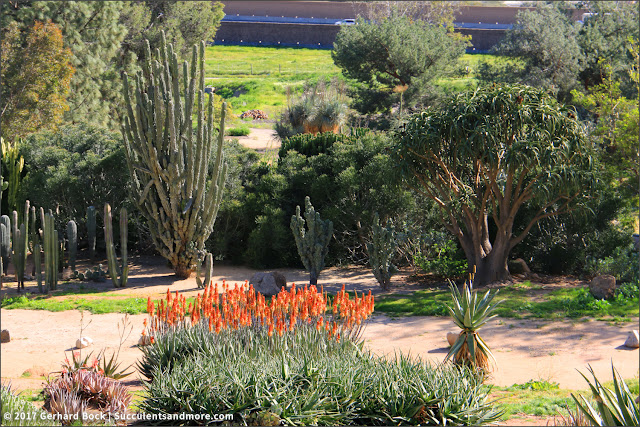 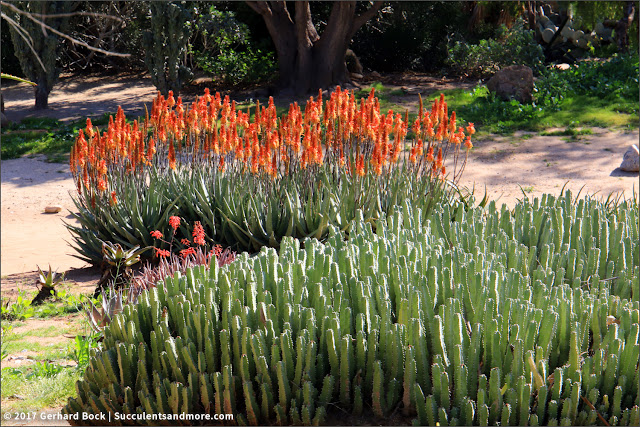 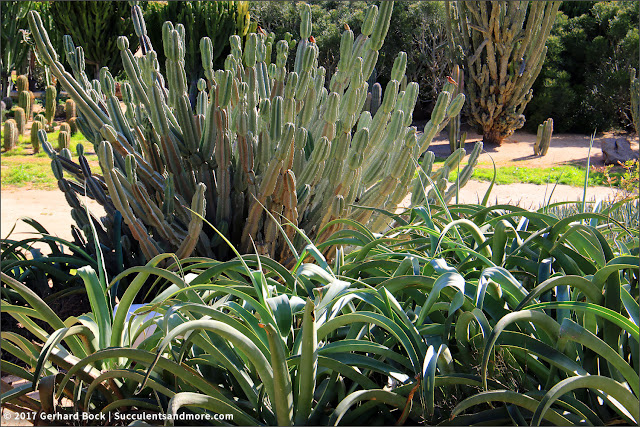 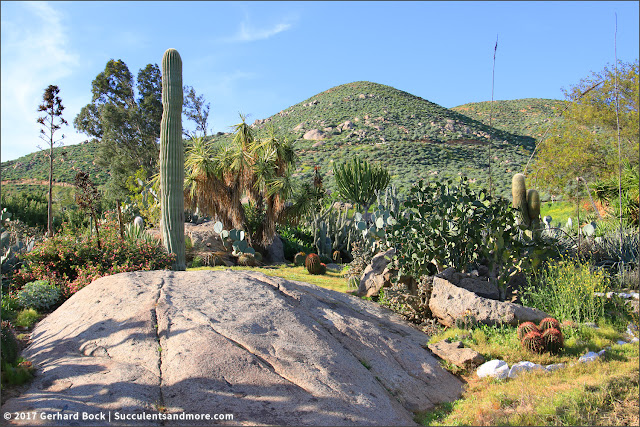 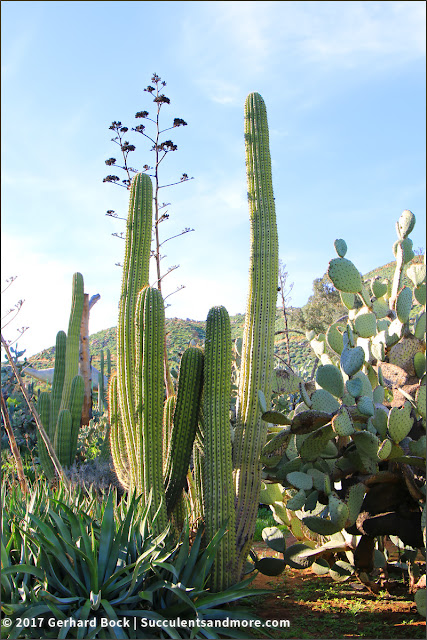 Granite Hill Gardens Nursery is not hard to find. Just look for this dinosaur: 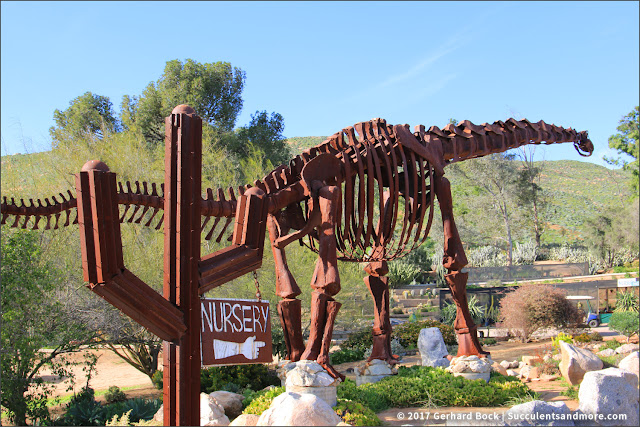 Its head points you in the right direction. 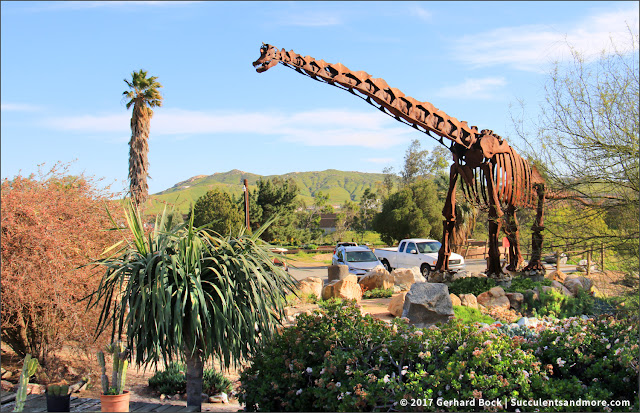 The nursery specializes in succulents. It's not large, but it pays to look around. I found a large and very healthy Aloe tomentosa in a #1 can for only $9. (Aloe tomentosa is one of the very few aloes with white flowers, and unlike most aloes, it blooms in the summer.) 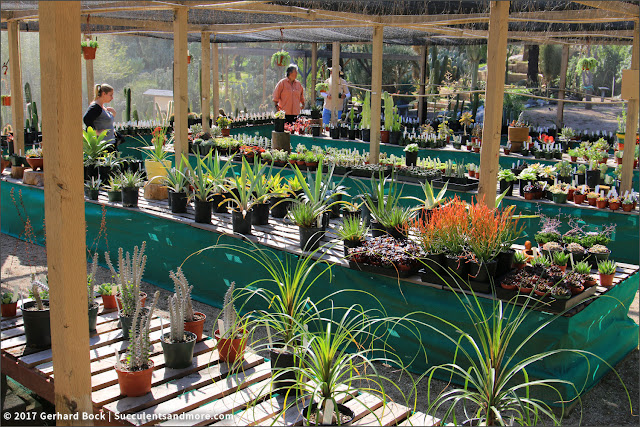 While the sales area above looks like a more traditional retail nursery, I was most excited about the outside tables on the hill above the nursery. They were still a bit sparse (I expect there is more stock later in the spring), but there were a lot of interesting plants. I found a Euphorbia grandicornis (three stems, all blooming) in a #1 can for $9. ($9 seems to be the standard price for 1-gallon containers.) 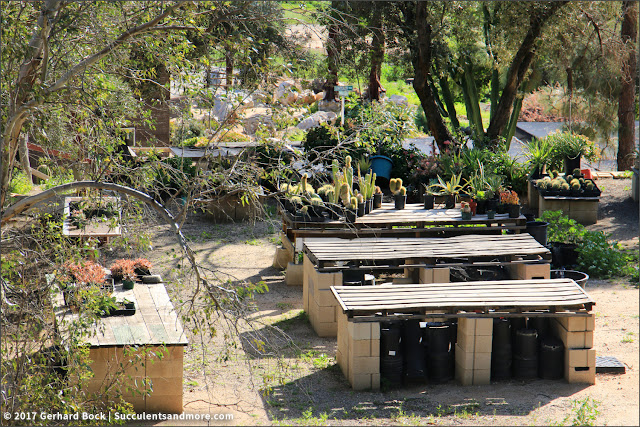 Here's a panorama of the outside area:

The most unusual feature of Granite Hills Gardens Nursery is this patch of cactus growing in the ground. These aren't part of a show garden. They are for people to buy! You pick out the one you want, a staff member will dig it up for you! I've seen this in Arizona, but never in California. Most of the plants were cardons (Pachycereus pringlei), with a few others sprinked in. Luisa bought a barrel cactus (probably Ferocactus wislizenii). 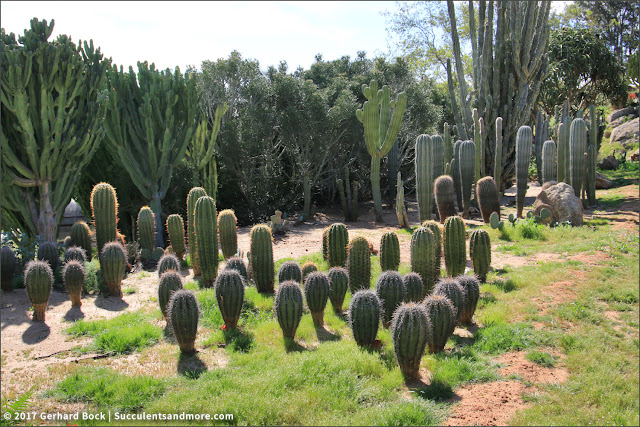 The Jurupa Mountains Discovery Center may be one of the Inland Empire's best kept secrets, but it deserves to be better known. So the next time you're in the area, look for the mammoth on the hill and take the Granite Hill Drive exit off CA-60!