Hail to Erik the Red (the aloe, that is)

- March 14, 2017
Erik the Red was a Norwegian Viking who established the first Norse settlement in Greenland in 982 and fathered Leif Erikson, reputed to be the first European to have discovered North America. Erik was nicknamed "the Red" because of his hair and beard. But as impressive they might have been, I'm sure they paled in comparison to this Erik the Red: 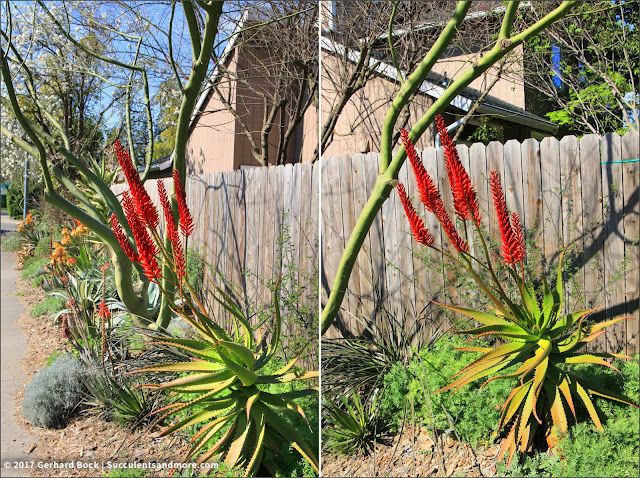 This is Aloe 'Erik the Red' in full flower. It has shown impressive growth ever since I planted it in March 2014 from a #5 can. In the winter of 2014/15 it had one flower stalk, last year two, and this year three.

But it's not just the elegant shape of the flower heads that makes passers-by stop. It's the color. The flowers are red. No, RED! It's the reddest aloe by far in our garden. 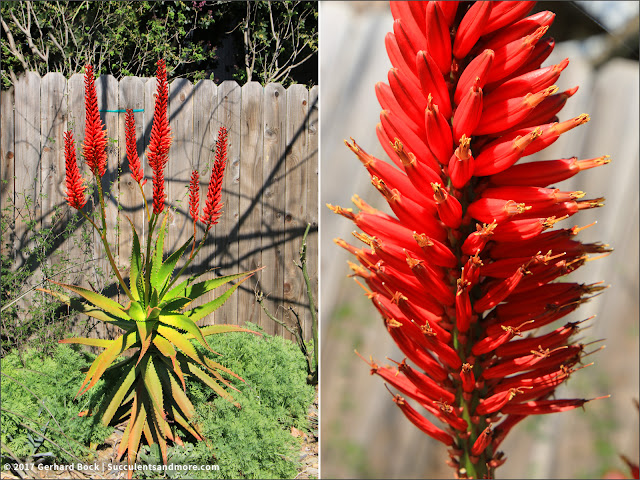 Aloe 'Erik the Red' is one of the many aloes hybrids created by Leo Thamm at Sunbird Aloes in South Africa. Only a few of them are available in the U.S., including 'Erik the Red', 'Moonglow' and 'Always Red'. For years I've been wishing more Sunbird hybrids would be introduced but apparently the process of importing new plants into the U.S. is studded with bureaucratic hurdles.

The exact parentage of 'Erik the Red' is a closely kept secret. All the Sunbird Aloes web site reveals is this:


Created as a striking feature plant, its release was eagerly awaited by all who have seen it in flower. With tall, blood red inflorescences towering over nearby plants of similar size, this tall stemmed beauty (as tall as a man) is indeed a focal point in any aloe planting. The leaves are green with a prominent spiny edge, a fitting foil for the glowing colour of the flowers. Even the smallest buds are deep red in colour and seeing that they are not covered by leafy bracts they announce the arrival of something special long before the first flowers actually open. [...]

Erik the Red flowers in late winter. It is named after the breeder's eldest son with whom it shares its tall stature.


So it's not named after the Viking explorer after all.

San Marcos Growers says it's "a complex hybrid involving Aloe mawii, which contributed its dark red color, combined with A. petricola, A. marlothii (red form) and A. arborescens."

Whatever it is, it sure is a stunner.