- March 25, 2017
My friend Marta, whose beautiful succulent and rare fruit tree garden I photographed in December, emailed me late last week to let me know her aloes were flowering. Needing a break from the torture of doing our taxes, I headed over in the early afternoon on Sunday to see what's going on.

I was prepared for blooming aloes but I didn't know I'd be finding this: 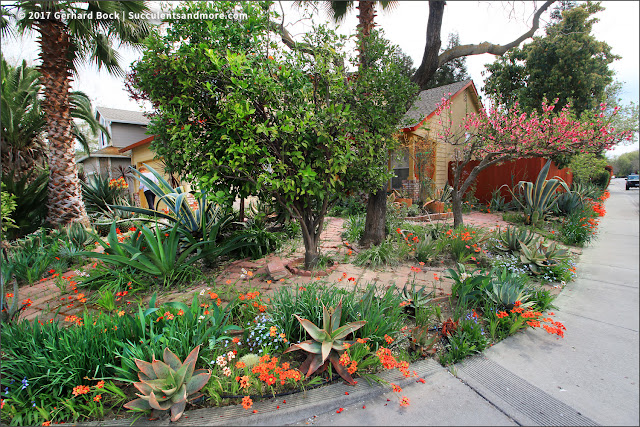 An honest-to-goodness explosion of sparaxis all over Marta's front yard!


Sparaxis, or harlequin flower, is a genus of flowering bulbs in the iris family endemic to South Africa's Cape Province. There are 13 species, only a few of which are typically found in cultivation. Most common are hybrids between Sparaxis tricolor and Sparaxis elegans.

Marta remembers planting "a few" Sparaxis bulbs years ago, and over time they have spread all over her front yard, both by multiplying but more importantly through seed. As you can see in some of the photos below, seedlings are now growing in the cracks between the pavers (as, incidentally, are seedlings of Echium wildpretii, aka towers of jewels). 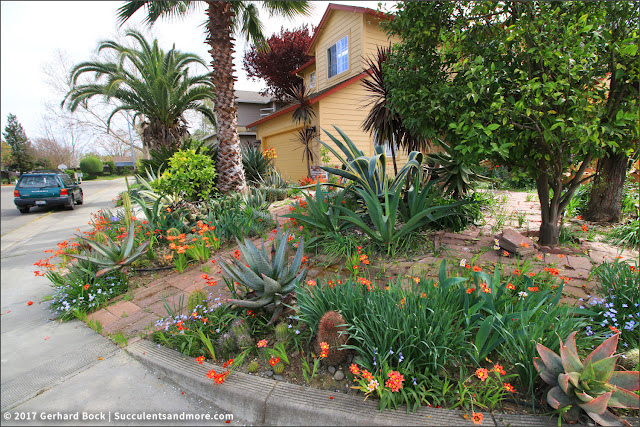 The sparaxis, and a few other spring-flowering bulbs, provide bright pops of color in between aloes, cacti and agaves. 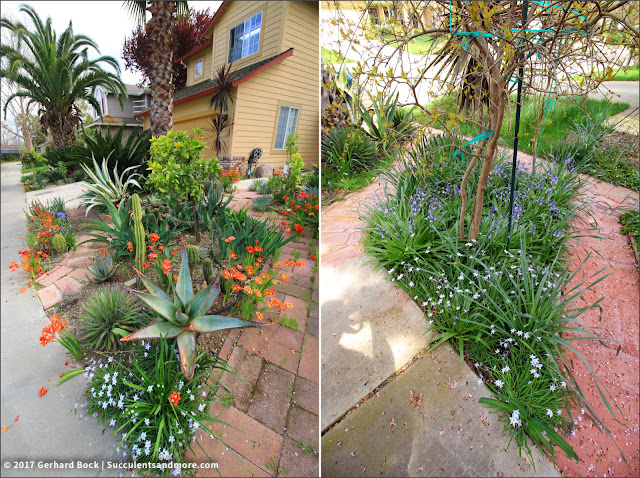 They don't flower long, maybe a few weeks, and the foliage dies shortly afterwards. But the overall effect is bright and cheerful--the epitome of springtime. 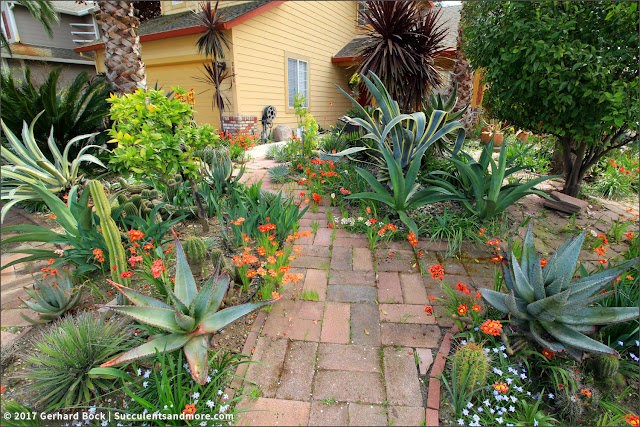 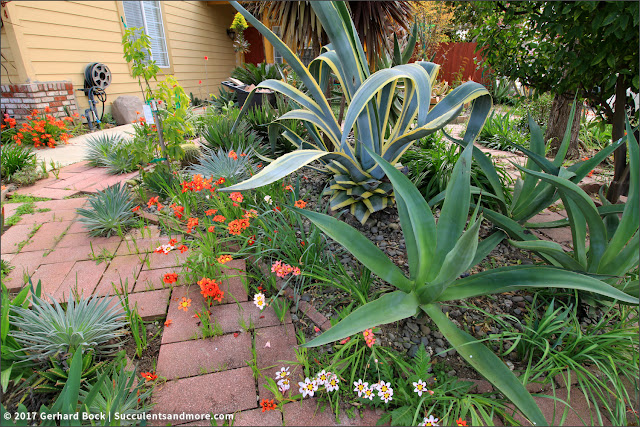 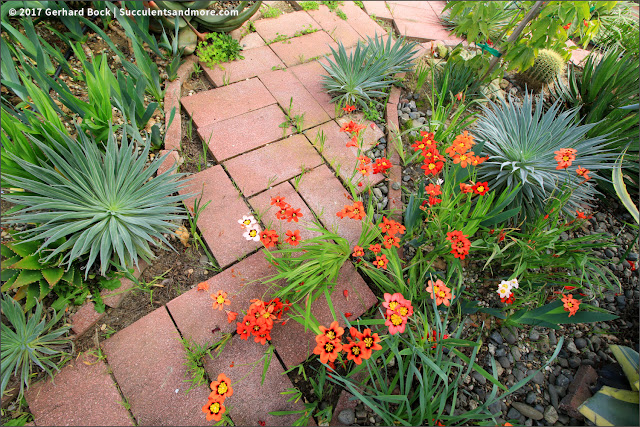 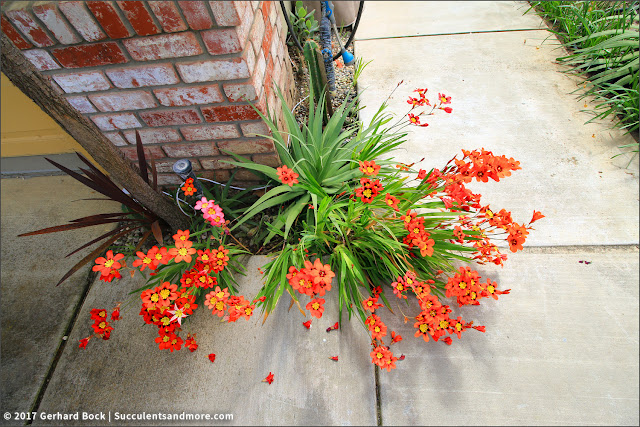 How can passers-by not smile when they see this! 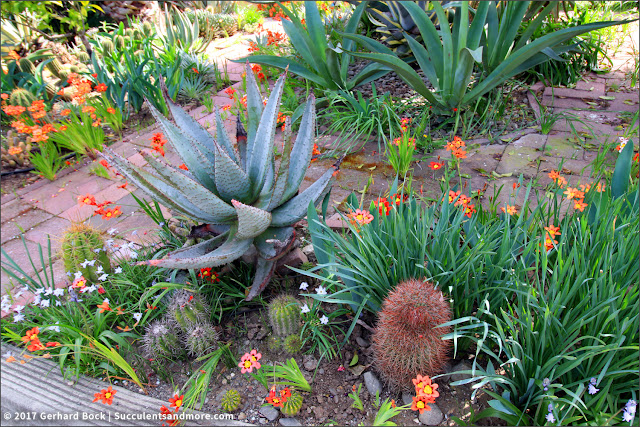 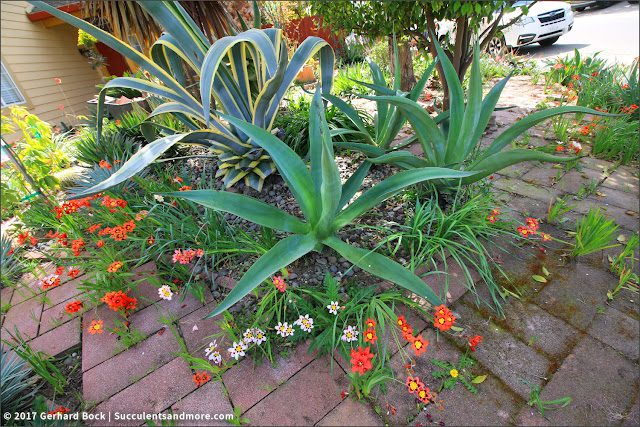 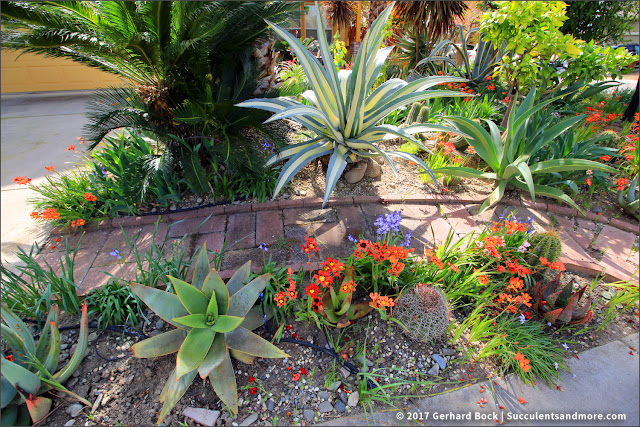 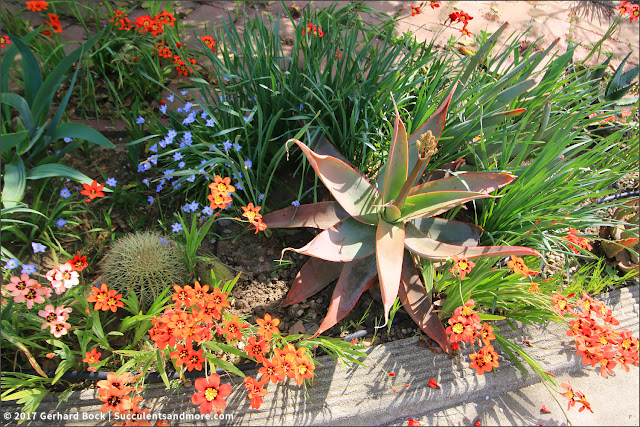 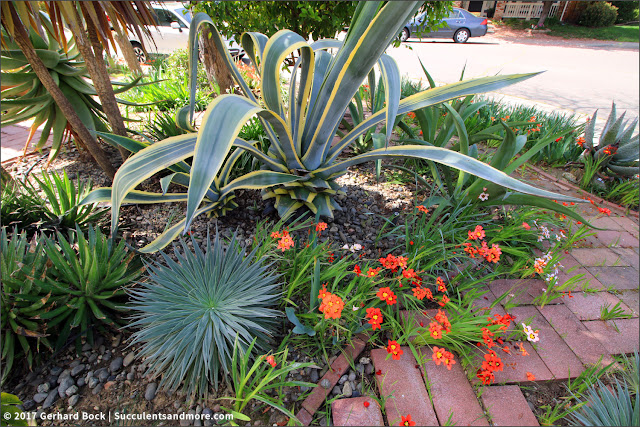 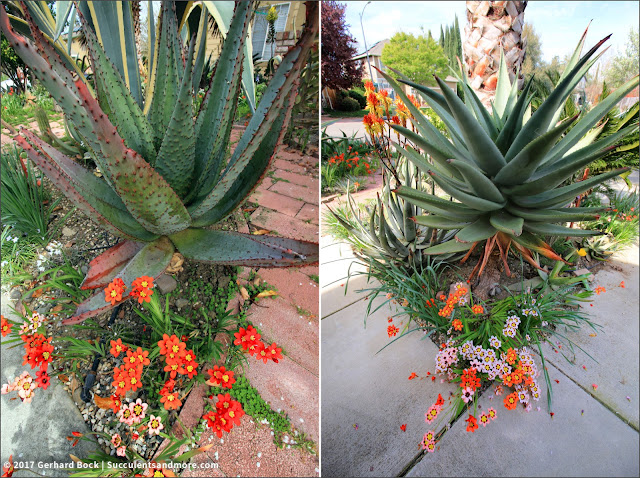 As for the aloes Marta emailed me about, many of them are in flower, too.

Marta also has some large aeoniums, both near her front door (left in the photo below) and as you walk into the backyard (right). They are seedlings from a plant she owned many years ago. 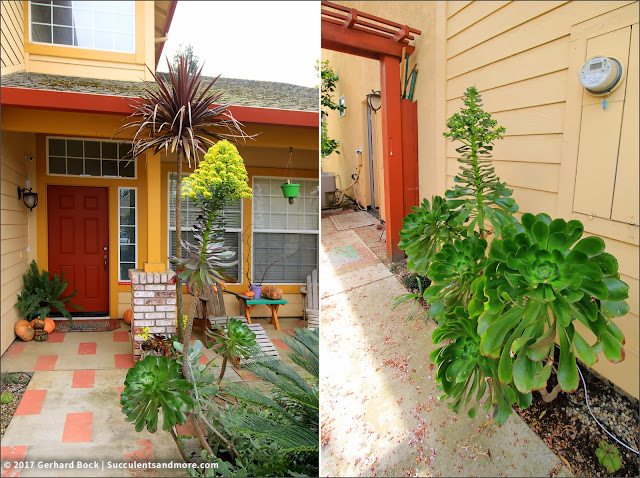 In the backyard, the first thing I noticed was this collection of pots, many of them fruit tree seedlings: 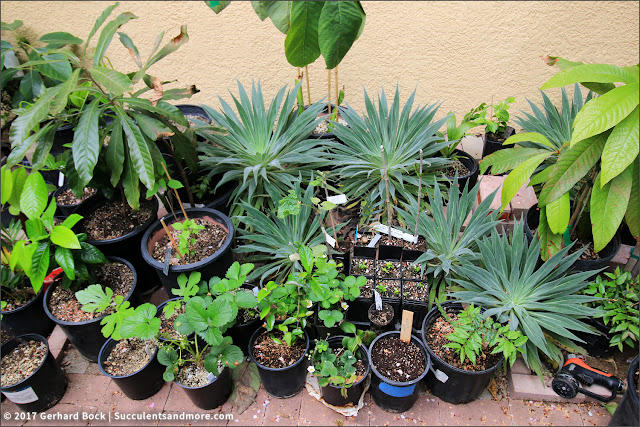 More photos of the backyard: 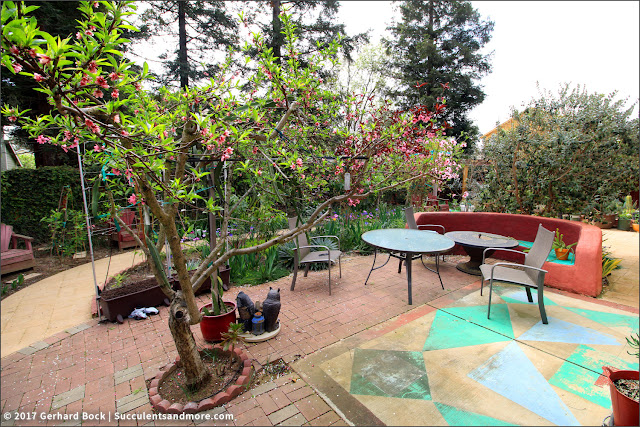 However, what made the biggest impression on me in the backyard is this tree. It's in full flower right now. It's not a common sight in Davis. Guess what it is? It's a 'Mexicola' avocado! Last year Marta had "only" about 100 avocados; this year she's hoping for a lot more. At least a half dozen other avocado varieties are grafted onto the tree under the protection of the canopy. 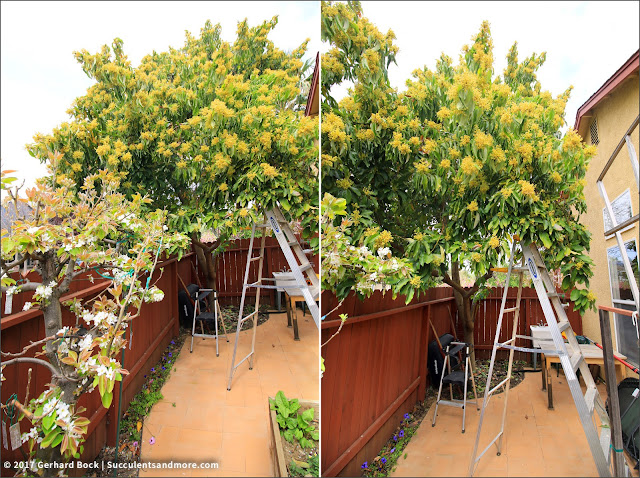 Back in the front yard, I couldn't resist; I simply had to take a few more photos of the sparaxis in full bloom among the succulents. 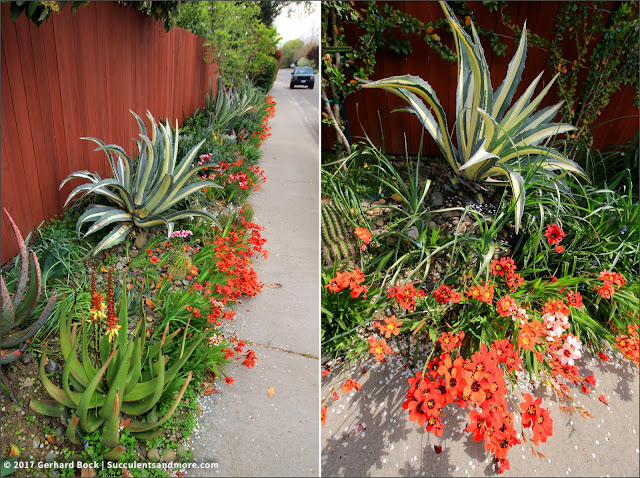 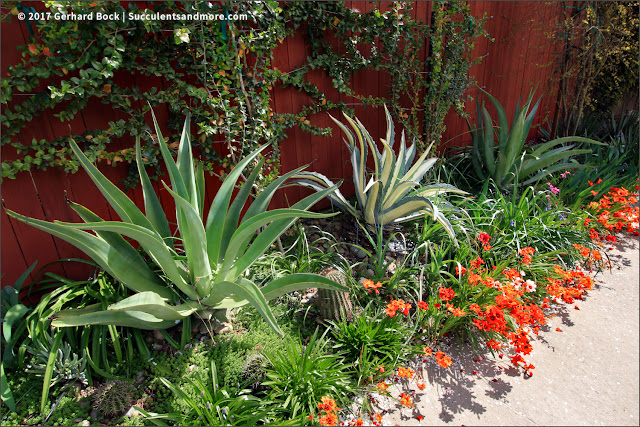 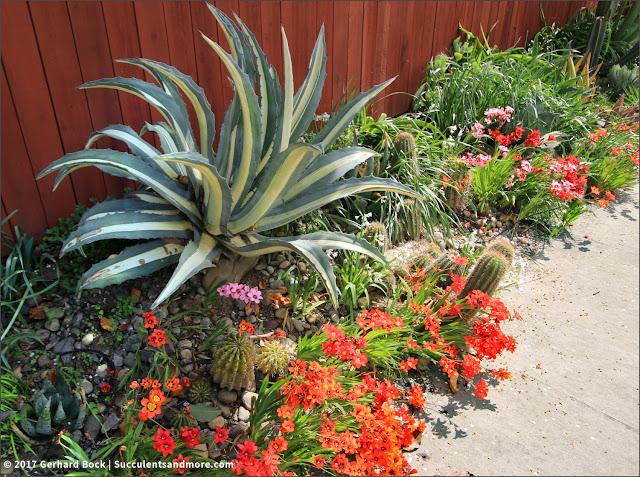 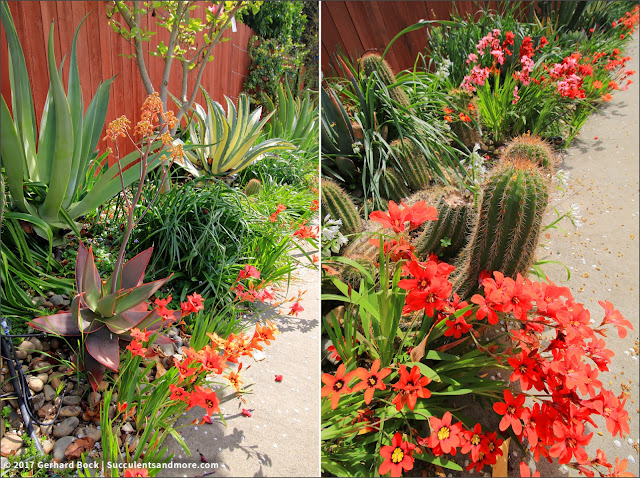 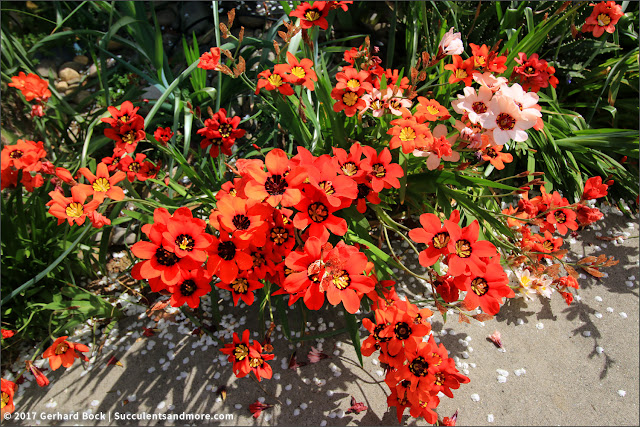 As I was taking photos, Marta casually pulled out a handful of sparaxis bulbs and handed them to me as I was getting ready to leave. I put them in a pot for now but I expect to soon have my own sparaxis spectacle.