Lodge on the Desert, Tucson, AZ

- January 19, 2017
When I was researching places to stay for my December 2016 Arizona trip, I was trying to find a sensible balance between comfort and price. I didn't want to stay in a fleabag motel just to save a buck (been there, done that, even had fun doing it back in the day), but I didn't want to overspend either. Fortunately, Arizona is still a bargain compared to California, and finding a reasonably priced but nice hotel is not difficult in Phoenix and Tucson.

For my December 2015 trip I'd found a great Groupon deal for the Lodge on the Desert in Tucson. I loved my room—far more spacious and luxurious than what I'm used to—but what I loved even more were the beautifully landscaped grounds. Last year many of the cactus at the Lodge on the Desert were adorned with Styrofoam cups to protect their growing tips from the cold. While this looked comical, it did impair the overall appearance. 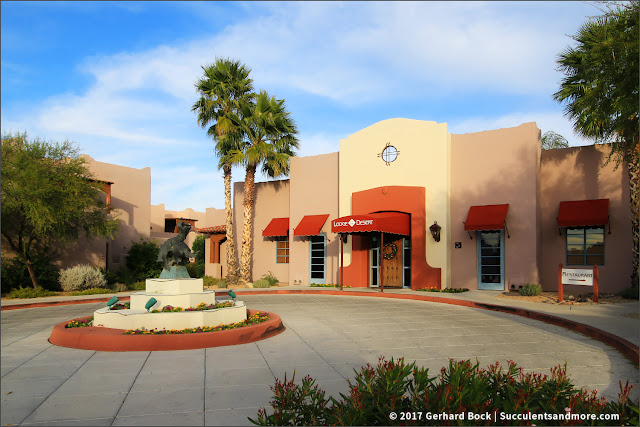 Eager to find out what the landscaping looks like without Styrofoam cups, I decided to stay there again this year. There was no Groupon deal this time, but I was able to use my (gasp!) AARP discount. (Full disclosure: I'm nowhere near retirement, but I'm a smidge over 50 and hence eligible for AARP membership.)

What I didn't realize was that the Lodge on the Desert has such a long and illustrious history, celebrating its 80th anniversary in 2016. The first building on the 2-acre site was a 4-bedroom private residence built in 1931 in what was open desert (downtown Tucson was four miles away). By 1936 the building had become a lodge with seven guest rooms. Celebrities filming westerns in Tucson often stayed there, including John Wayne, Jimmy Steward and Paul Newman. More rooms were added beginning in the 1950s, but the Lodge as it exists now is the result of a major expansion started started in 2009. What was once a spot in the desert is now smack in the middle of urban development. But with a high wall around the property, the Lodge still feels more remote than it really is.

The Lodge's website has a very interesting gallery of promotional materials from the 1930s through the 1990s. Quite a few things made me chuckle and/or cringe, including a map from the 1930s that proudly states that "Tucson is but 19 hours from New York and Washington, D.C. by the new fast planes of American Airlines, Inc." and a brochure from the 1930s advertising the "American Plan" at "[r]ates from ten dollars" but warning that "[o]nly those of the utmost desirability are welcome" (ouch). A photo of the unpaved road to the Lodge looks like present-day Saguaro National Park.

This is what the grounds of the Lodge on the Desert look like now. I focused on the desert plants, but there's also a large lawn, presumably for families to play on, and a very nice heated swimming pool. 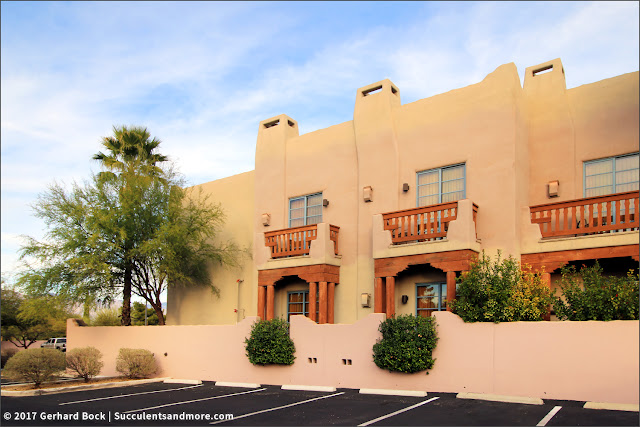 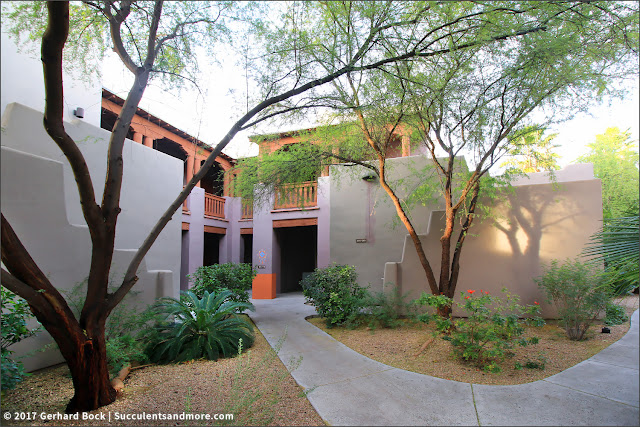 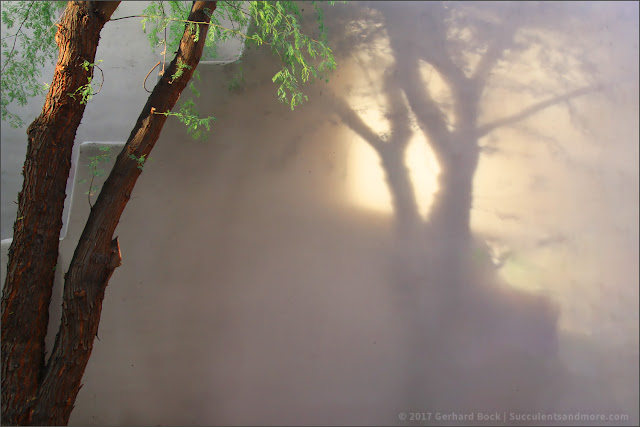 I was staying in a casita in an older part of the Lodge. This is the walkway that leads there: 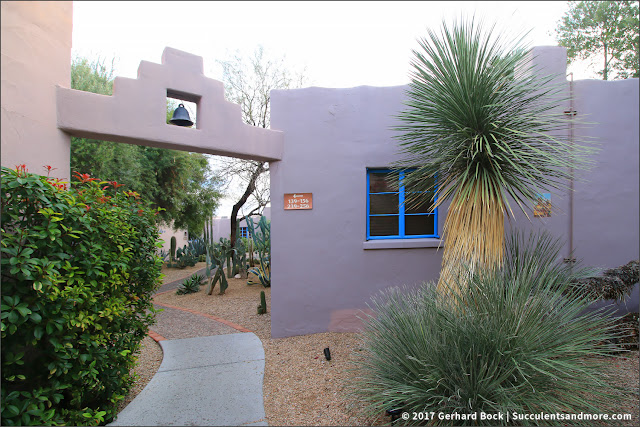 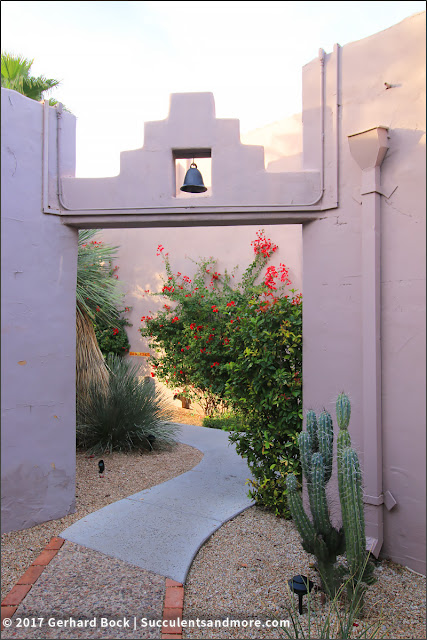 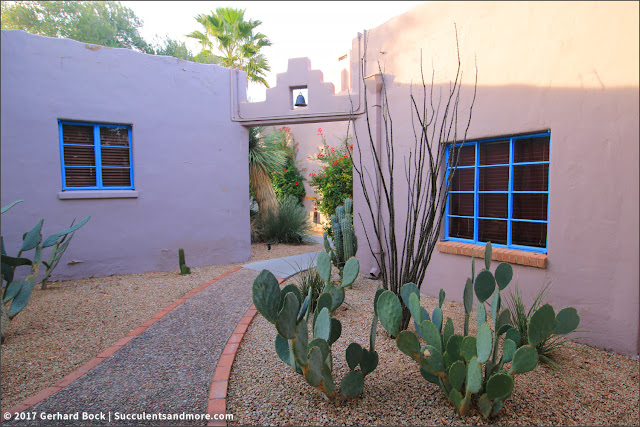 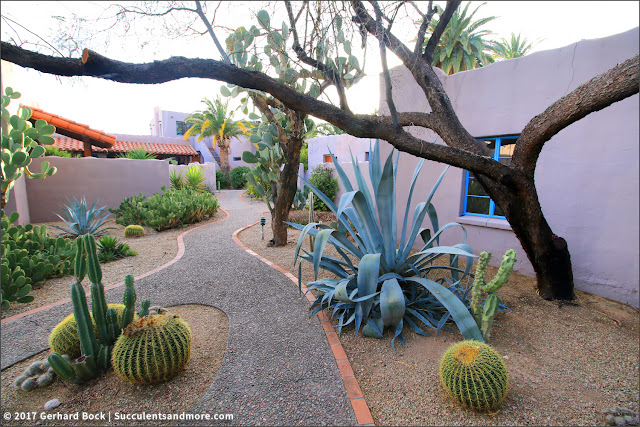 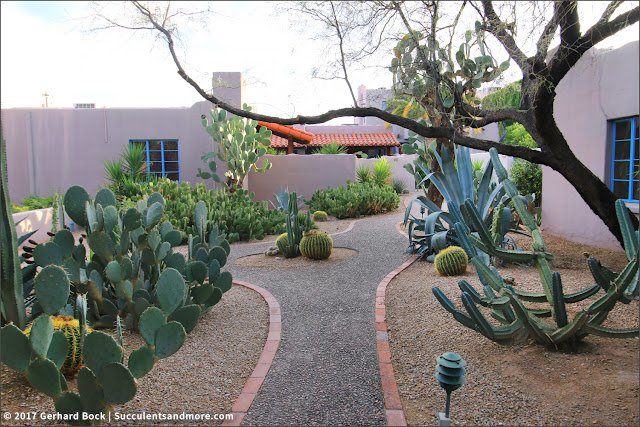 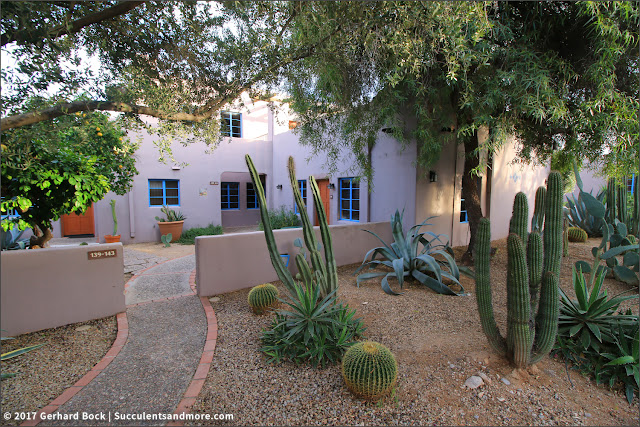 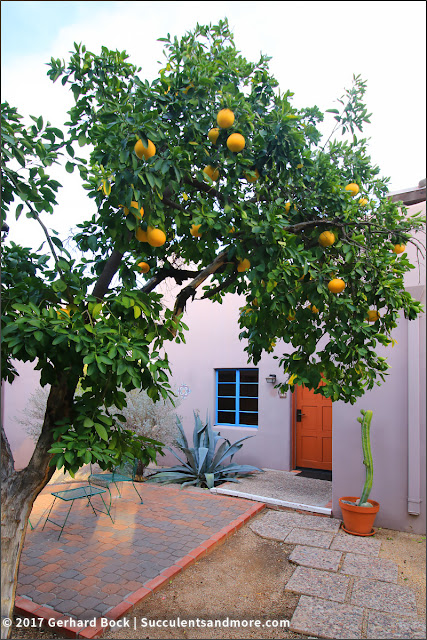 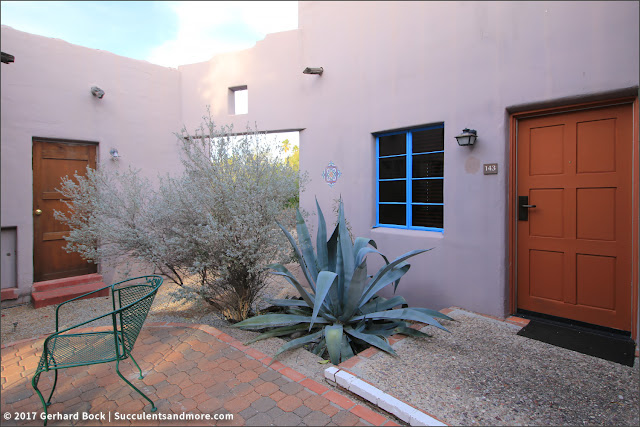 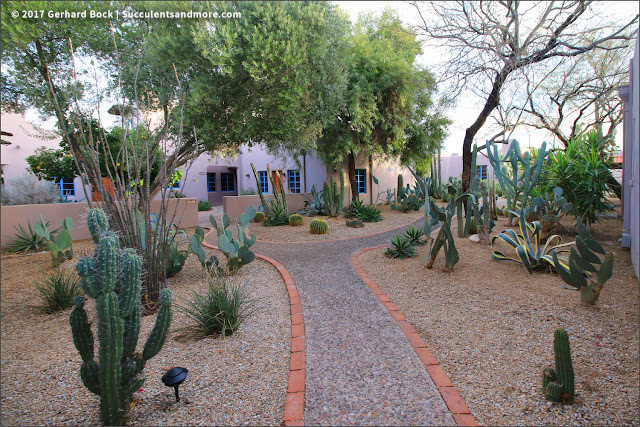 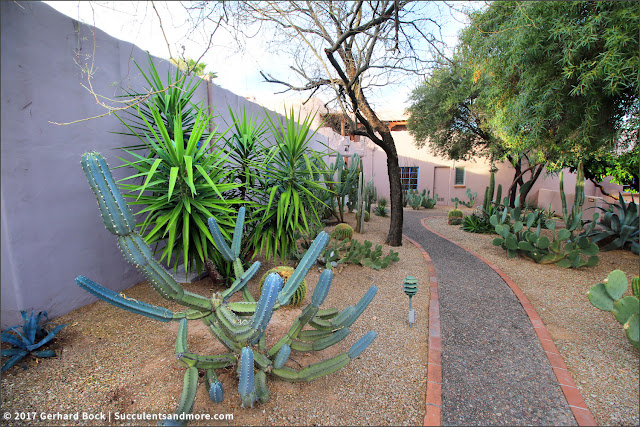 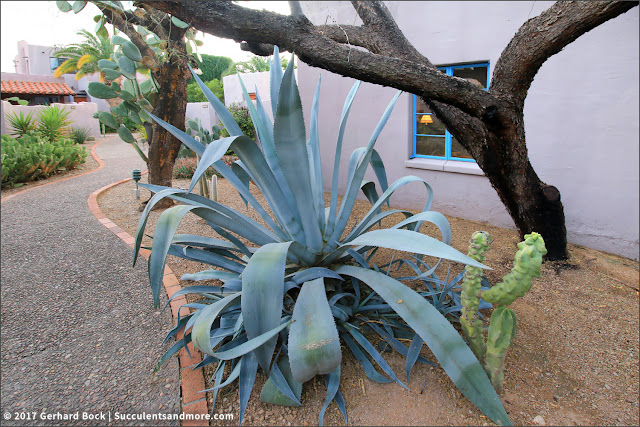 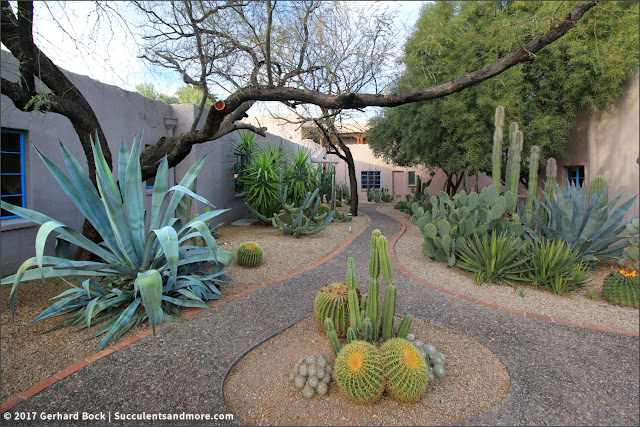 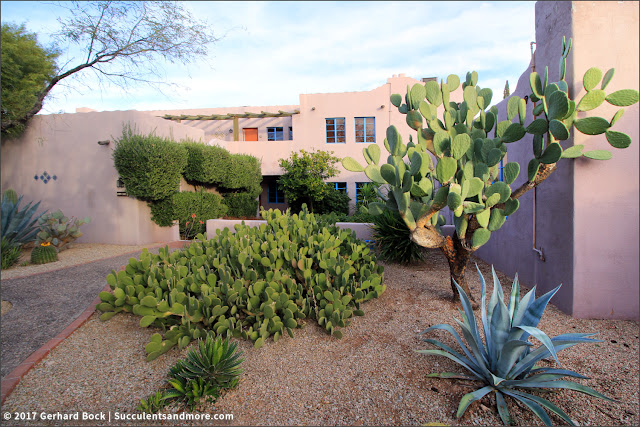 This was "my" small courtyard (there are three rooms here; mine was the one in the middle): 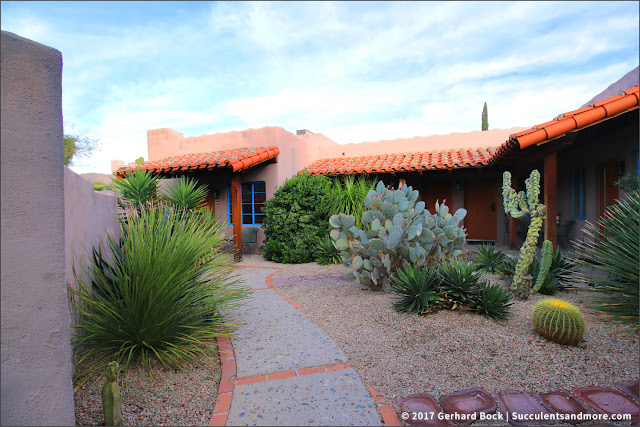 Looking towards the main walkway from my front door: 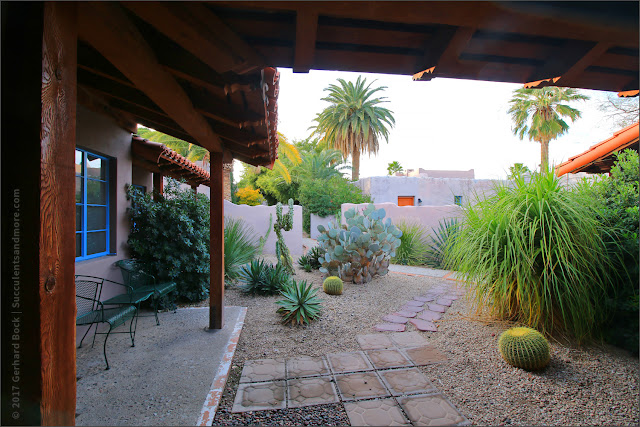 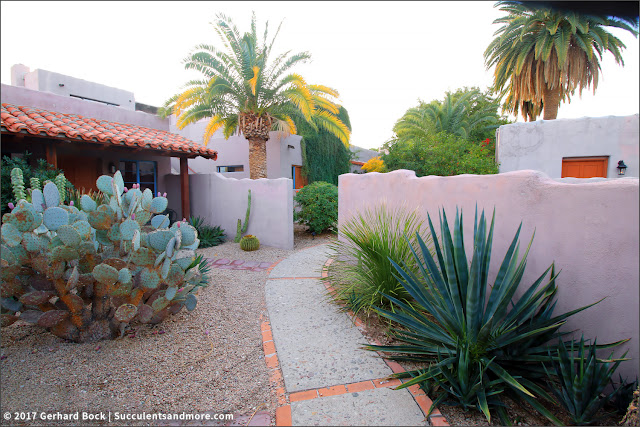 Having stayed there twice now, I think I've found my home-away-from-home in Tucson. Yes, there are many other hotels, motels, inns, etc. that are cheaper but they're also much more generic. This place has character, and that is becoming harder and harder to find.