Spring and fall are when we do most of our gardening. Summer is for leaning back and enjoying the fruit of our labor—sometimes from inside, through the windows, when it’s too hot. That will be the case next week. The weather peeps are forecasting 105°F for Wednesday (41°C), and as hot as that is, it’s still cooler than the torrid 119°F (48°C) expected for Phoenix, AZ this coming Monday. Yikes!

For now, we’re enjoying a bit of June gloom with temps in the low 80s. Overcast skies make for better photographs, so here are some quick snaps from the front yard. They’ll come in handy next year to assess growth and progress year over year. 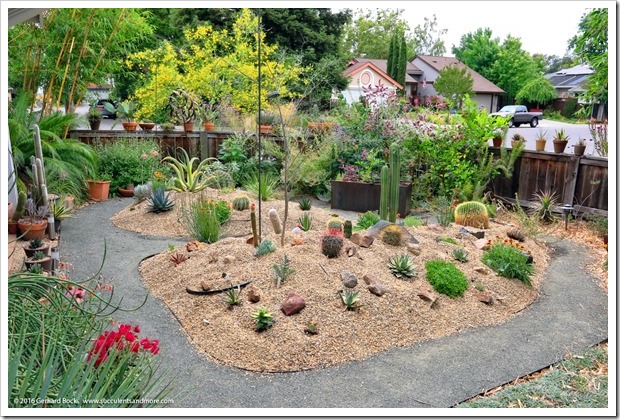 The plants in the new succulent mounds that have replaced the front lawn are settling in nicely. The six Gaillardia × grandiflora ‘Goblin’ have positively exploded; they’ve been flowering non-stop for months now. 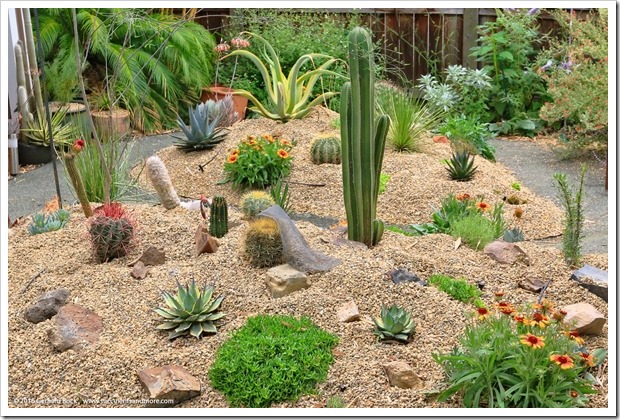 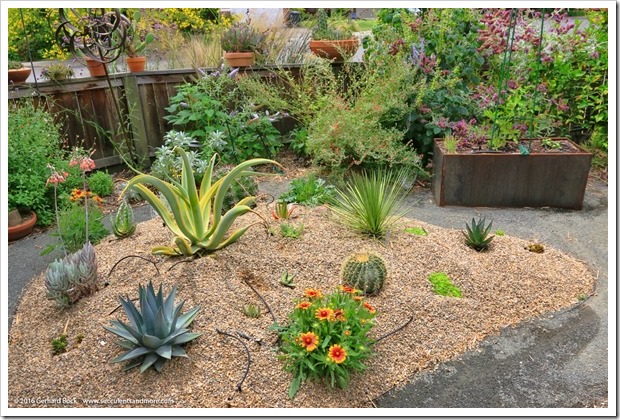 The Corten veggie planter hasn’t been as successful as we’d hoped. The ‘Early Girl’ tomato growing here is significantly smaller than the one in the backyard, although both get about the same amount of water. I guess the soil we used wasn’t as “amended” as advertised. And yes, the Canary Island sage (Salvia canariensis) and globe mallow (Sphaeralcea ambigua) behind the planter box need to be reined in a bit. 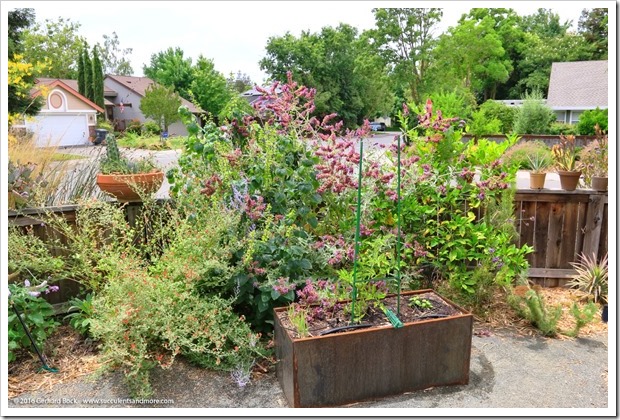 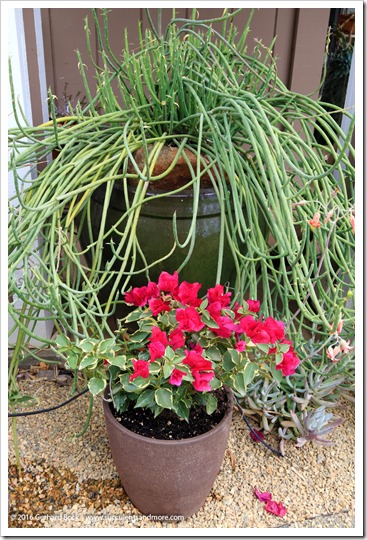 The next few photos show the tail end of the big palo verde bloom of 2016. This ‘Desert Museum’ between our house and our neighbor’s has been blooming since mid April. Truly a spectacular sight—and a non-stop feast for the bees. The litter from the petals has been manageable, especially since all of us like the carpet of yellow on the driveway. 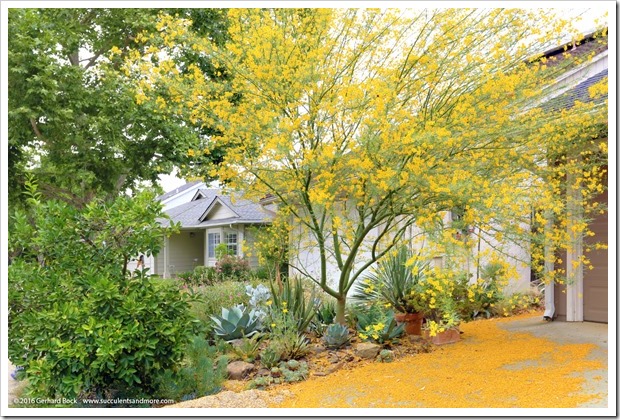 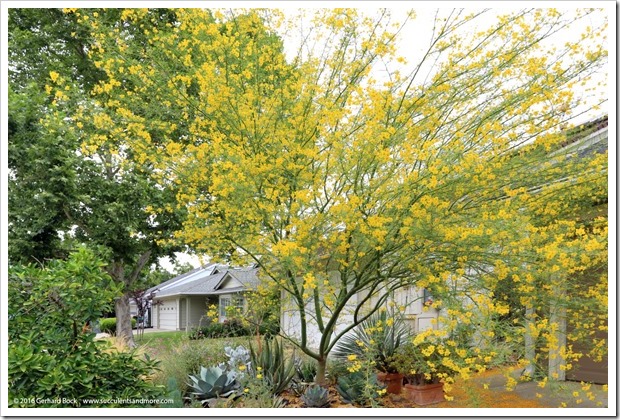 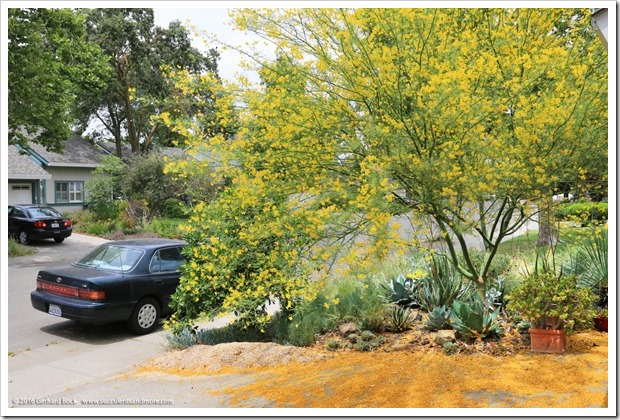 In the planting strip outside the front yard fence, the lavenders have started to bloom. After losing a handful of lavenders a few years ago (they’re quite short-lived in our climate) we planted a mix of white-, purple- and blue-flowering varieties. Invariably, the white-flowering Lavandula × intermedia ‘Edelweiss’ attracts the most attention. 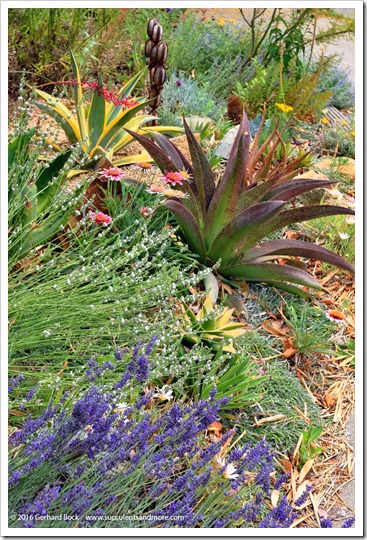 ×Mangave ‘Macho Mocha’ bloomed this spring, triggering the countdown to its demise. I cut down the flower stalk early because it was infested with aphids, and I haven’t noticed any signs of the mother plant dying. It’ll be curious to see how long it will take. There’s conflicting info on the Internet as to whether this hybrid always dies after flowering. The consensus seems to be that, even if it does die, it produces offsets first. I haven’t seen any babies yet. 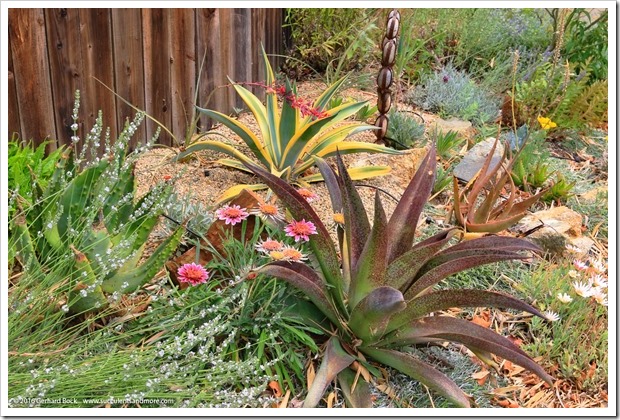 Next photo: one of my favorite smaller aloes, Aloe ‘Hellskloof Bells’ (a Brian Kemble hybrid between Aloe pearsonii and Aloe distans) growing happily in a carpet of Dymondia margaretae. I wonder what will happen when that Echium wildpretii seedling gets bigger… 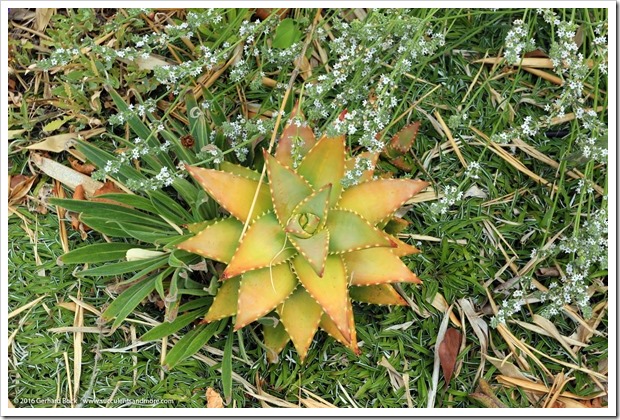 Speaking of favorites, here’s one of my favorite agaves at the moment, Agave weberi ‘Arizona Star’ rapidly pushing new leaves: 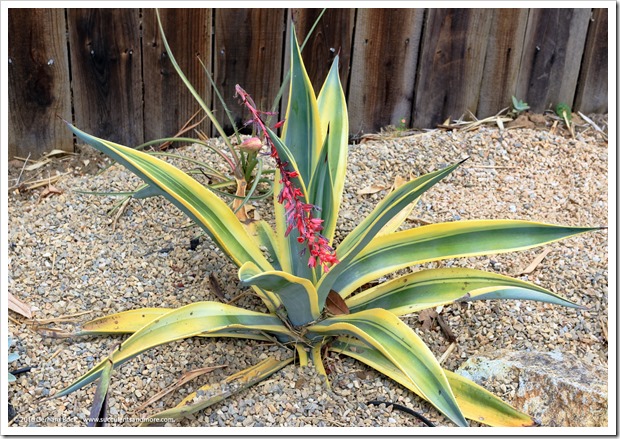 Firecracker plant (Russelia equisetiformis) blooming its head off at the base of our second ‘Desert Museum’ palo verde: 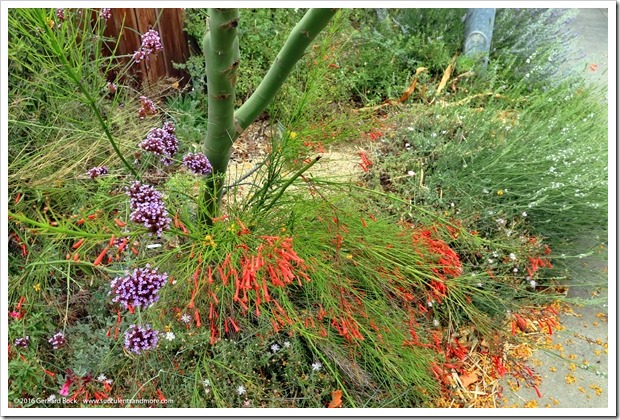 Just behind it is another new  addition, an Agave ‘Grey Ghost’ pup my succulent friend Barry gave me recently. It’s in the spot previously occupied by a cluster of Echium wildpretii that flowered this year. ‘Grey Ghost’ is thought to be a hybrid between Agave salmiana var. ferox  and Agave asperrima. It was available for a short period of time through Plant Delights Nursery. It’s one of Barry’s favorite agaves because of its elegant form, and this spot should be right for it. It will be a big boy when it grows up (to 6 ft. wide and tall). 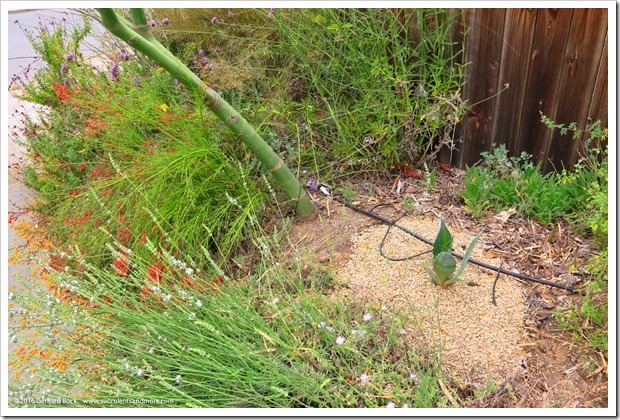 This ‘Desert Museum’ palo verde is noticeable smaller than the one adjacent to the driveway and it started to bloom about a month later. It’s just now hitting its peak as the other one is winding down. 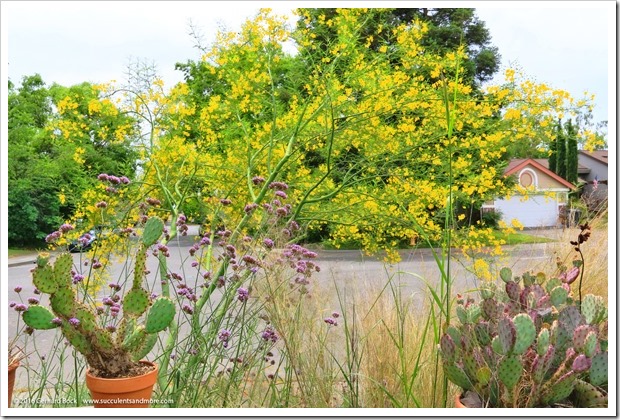 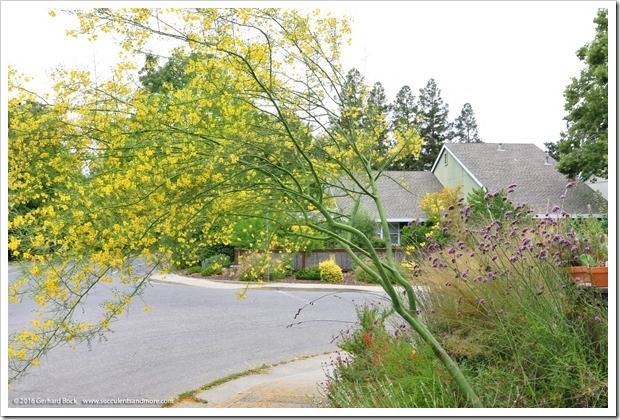 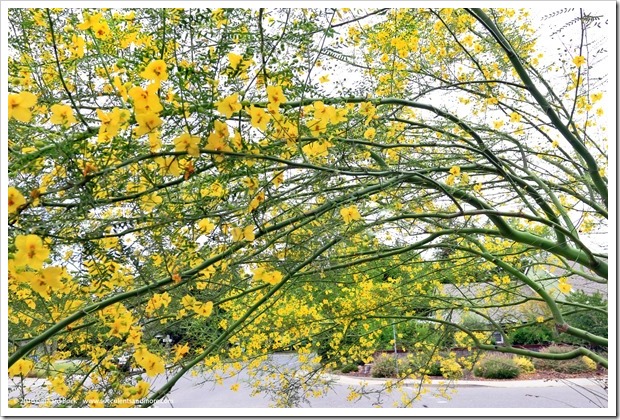 The green trunks contrast well with the ever-blooming Verbena bonariensis behind the tree. 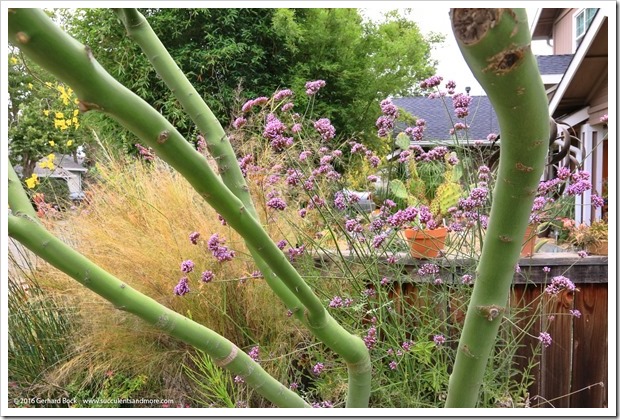 Our third palo verde, a hybrid called ‘Sonoran Emerald’, is in the desert bed outside the backyard fence (we’re on a corner lot). It’s a shy bloomer compared to ‘Desert Museum’ but it forms such a lovely canopy over the sidewalk that I don’t mind. 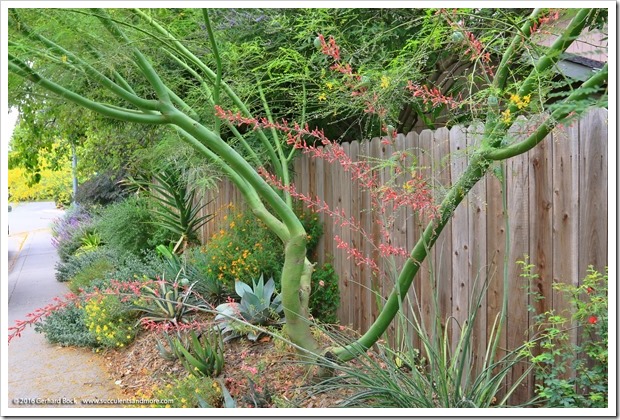 All the plants in this bed look very happy. The orange-flowering perennial-that-wants-to-be-a-shrub is a bush marigold (Tagetes lemmonii ‘Martin's Mutant’). And let’s not forget the ‘Hercules’ tree aloe to the left of it. 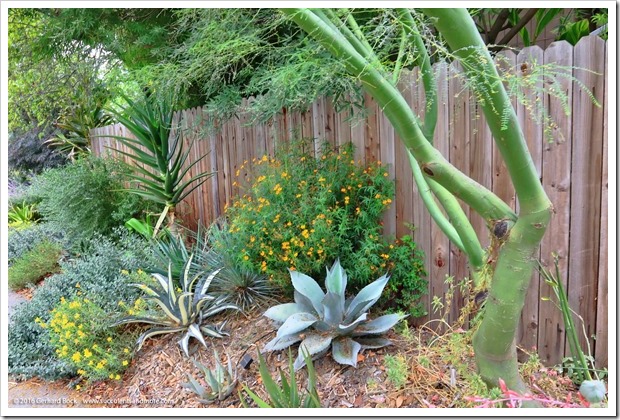 Agave americana ‘Medio-picta alba’; behind it Aloe ‘Moonglow’; to the right of it Yucca rostrata: 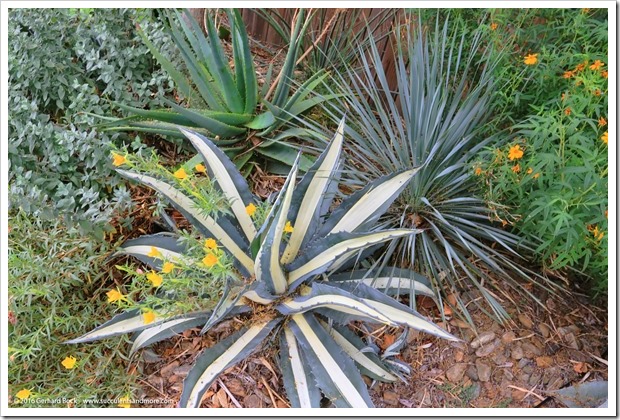 Agave ovatifolia in front of the bush marigold: 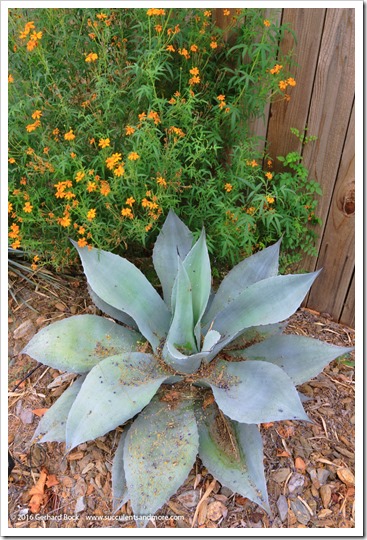 I love how there’s always something to discover and photograph in these beds!