Last weekend, May 7-8, the Sacramento Cactus & Succulent Society (SCSS) held its annual Show & Sale. This year marked the 56th anniversary of this event—quite an accomplishment, considering how short-lived many volunteer-run organizations are.

This post focuses on the vendor area in the courtyard of the Shepard Garden and Arts Center on McKinley Blvd, the home of the SCSS for decades. My next post will take you inside the building to show you some of the award-winning succulents entered in the juried competition.

In previous years, I had been the publicity chair for the Show & Sale. This year, I was in charge of the plant hotel, a holding area in the far corner of the courtyard where people could “park” their unpaid plants while they visit the show inside the Center—or, as it turned out, run to the ATM to get cash. More on that later. 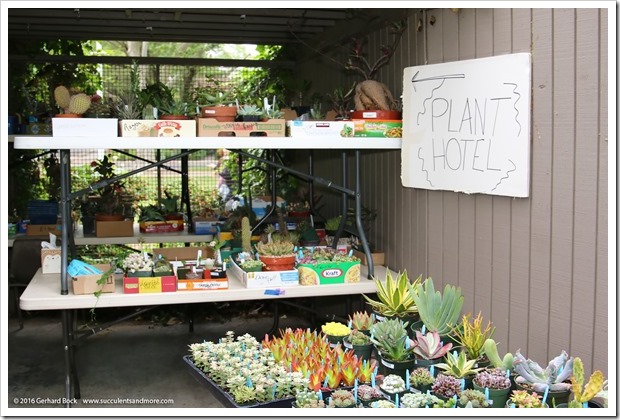 Setup for the event was on Friday, and members helping out or dropping off plants for the show were able to do a bit of early-bird shopping. SCSS Vice President Mariel Dennis knew that resistance was futile and borrowed a pram-turned-plant wagon from a vendor to haul her goodies. 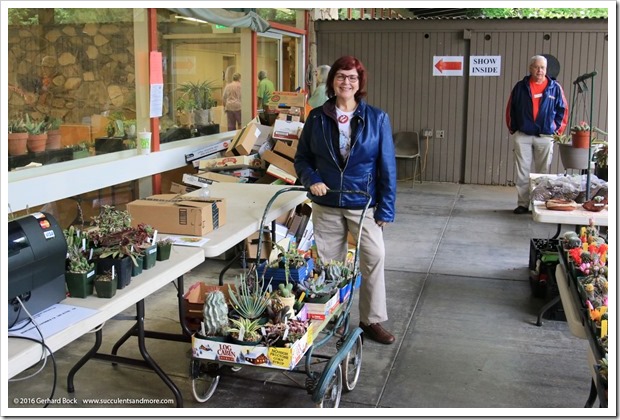 Saturday dawned gray and overcast. As I was getting ready to leave my house at 7:30 a.m., I wasn’t sure whether the menacing-looking storm clouds would keep people away. Although personally I’ll take gray and refreshingly cool weather over blistering heat any day.

When I got to the Center, I had a few spare minutes so I took some photos of the vendor tables before the official opening at 9 a.m. 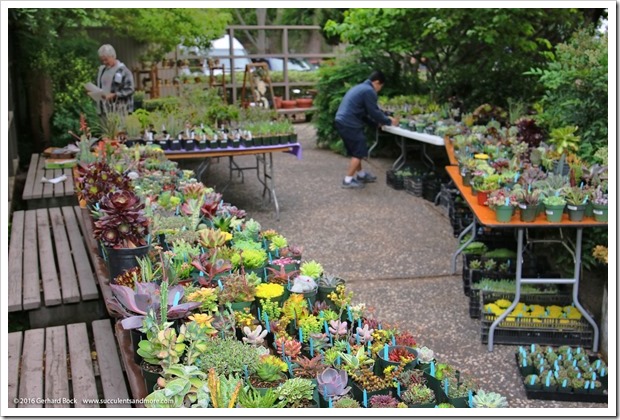 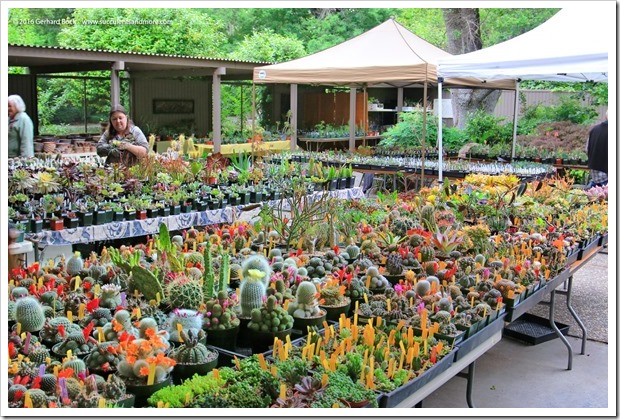 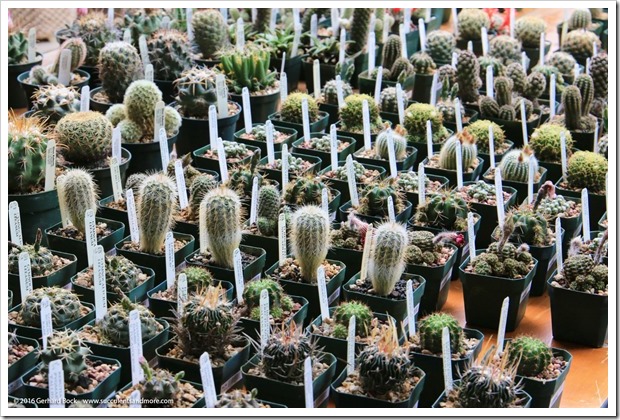 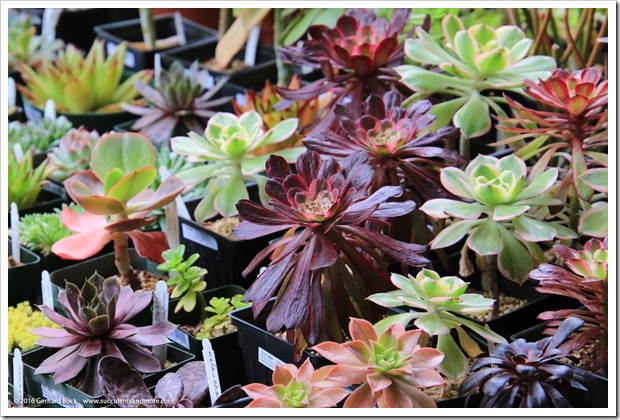 Center: Aeonium ‘Mardi Gras’, a relatively new and extremely attractive introduction. I was tempted, but I’m cutting way back on aeoniums to make room for plants that don’t go dormant in the summer or need frost protection in the winter. 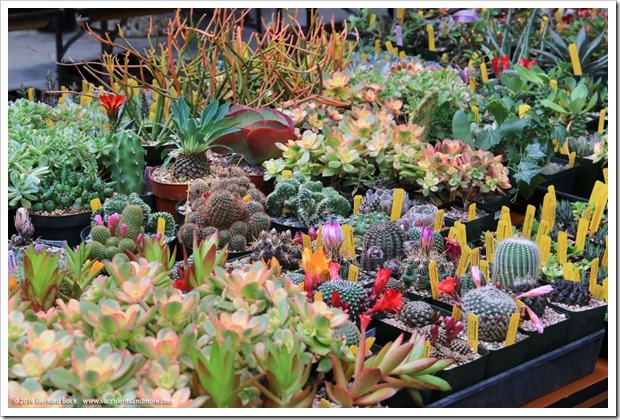 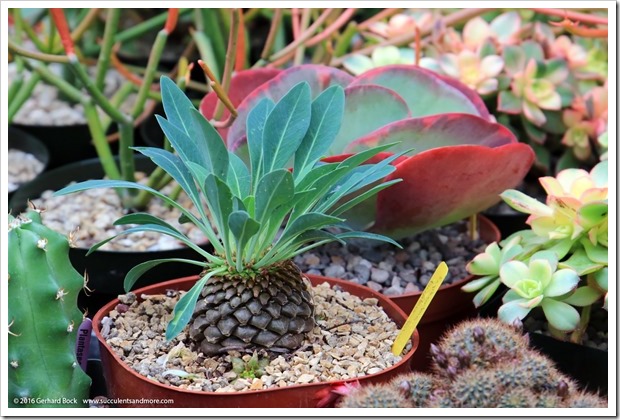 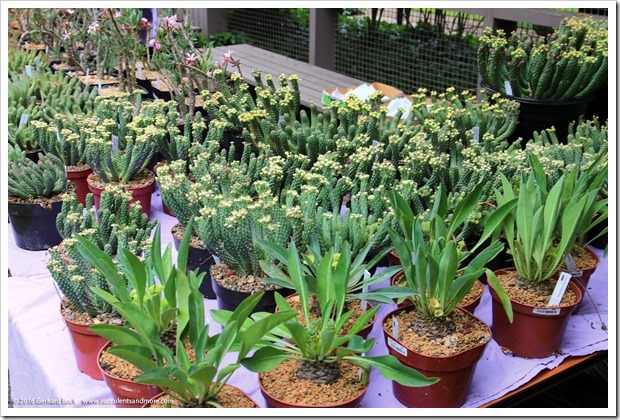 More Euphorbia bupleurifolia (foreground) and Euphorbia inermis var. nova behind it. This was the table of Peter Walkowiak, a vendor from San Diego County, who participated in the SCSS show for the first time. 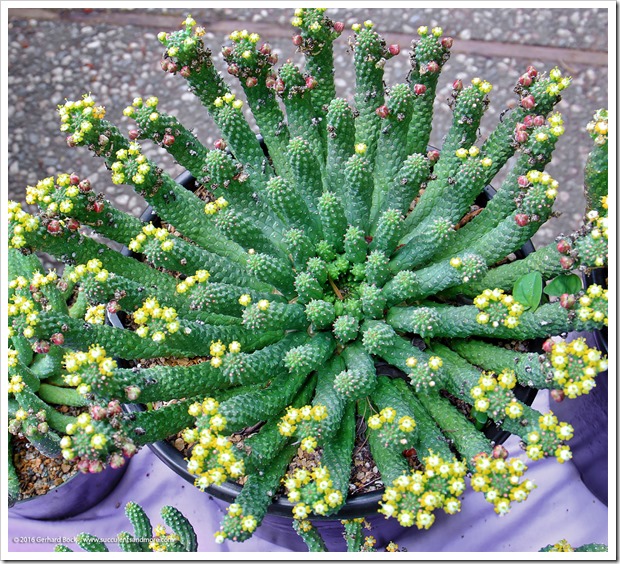 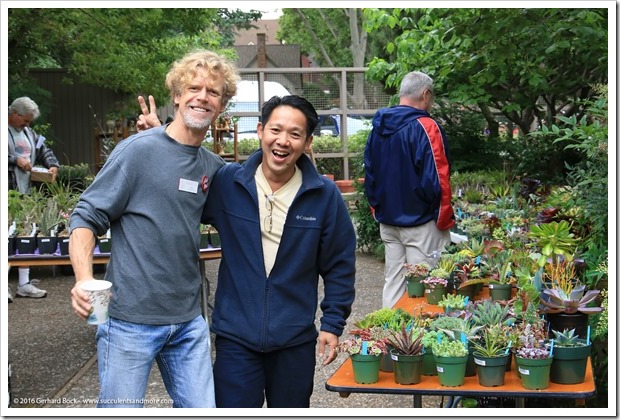 Jaan Lepson and David Calibo, two of our plant vendors

While most of the vendors sold plants, we also had three pottery vendors: Connie Esquibel, Donna Taylor, and Mark Muradian.

Connie Esquibel from Shingle Springs, CA is well-known for her whimsical head planters. While this isn’t my style, I can’t help but smile when I see her creations: 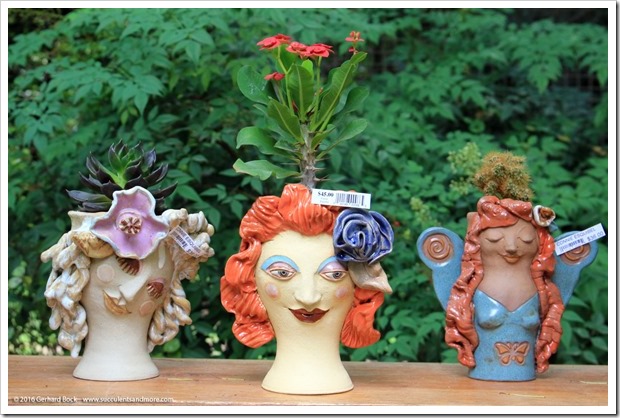 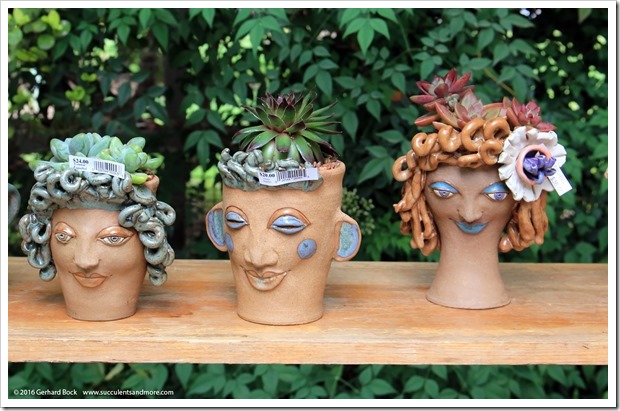 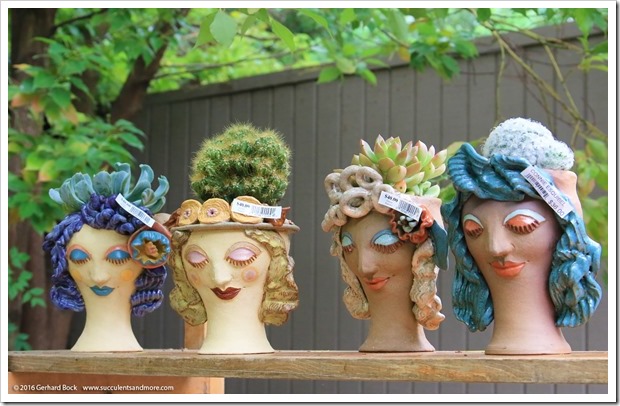 Donna Taylor from Fairfield, CA has a loyal following on Facebook. She and her husband Keith Taylor teach workshops out of their house. 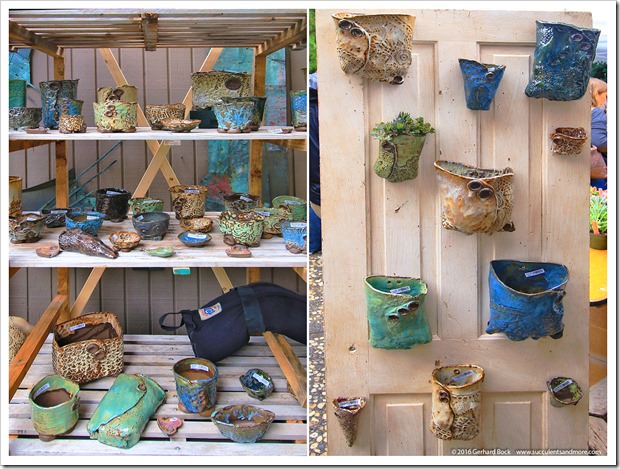 Mark Muradian from Fresno County is a familiar face at succulent and pottery shows in California. I love his pottery and buy a piece or two every time I see him. This year I opted for a larger pot so I had to limit myself to just one. 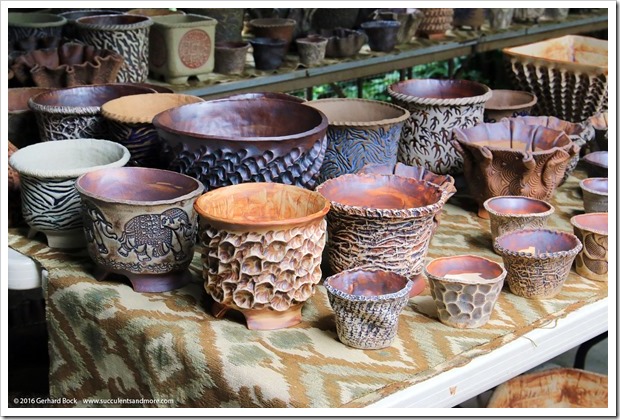 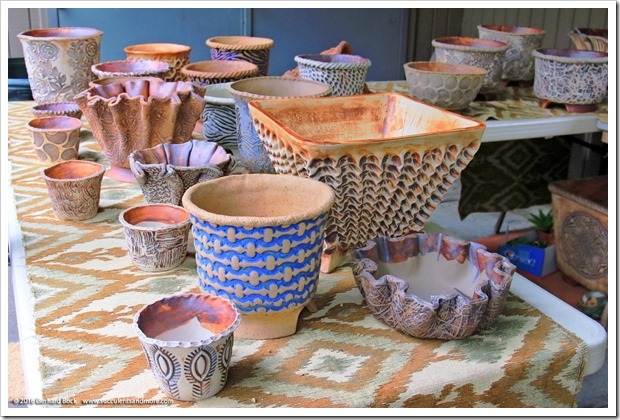 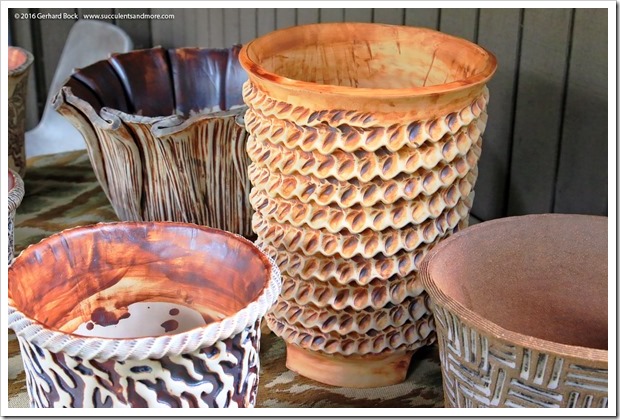 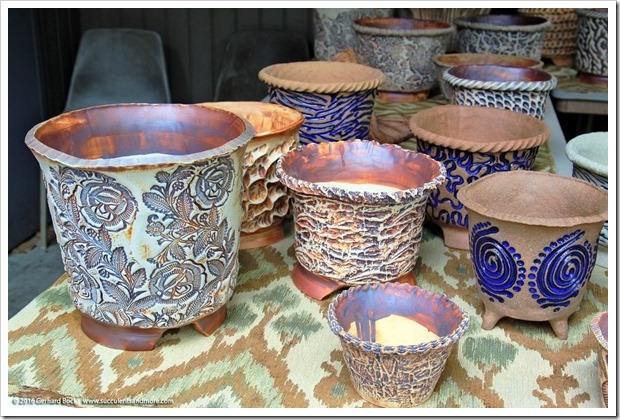 Remember how I said earlier that I wasn’t sure whether the weather would keep people away? Those fears blew away like a tumbleweed in a desert storm when I took a peek outside the gate and saw a surprisingly long line of people. Certainly an encouraging sign, considering that it actually started to sprinkle: a first in the five years I’ve been active in the SCSS. I had never seen umbrellas at an SCSS Show before. 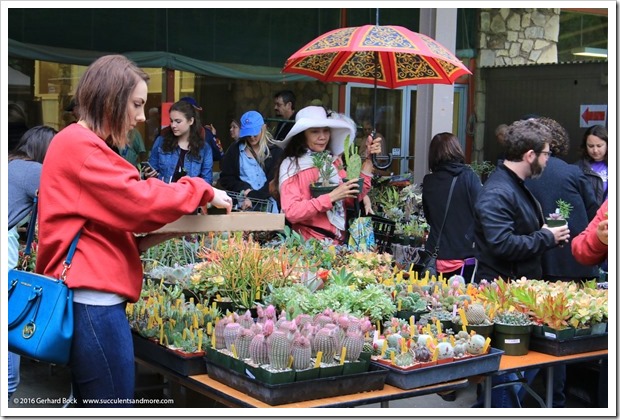 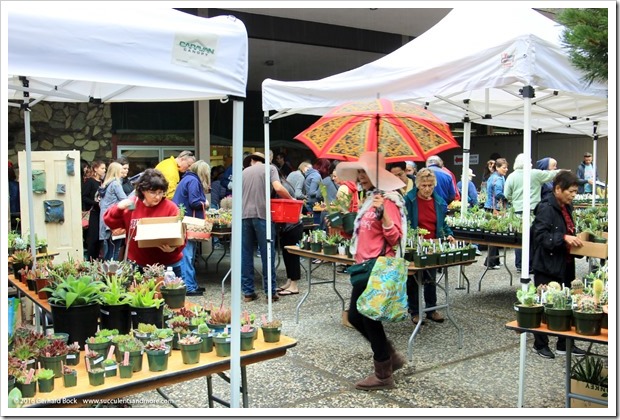 The rain didn’t last or really amount to anything. It certainly didn’t stop the people. 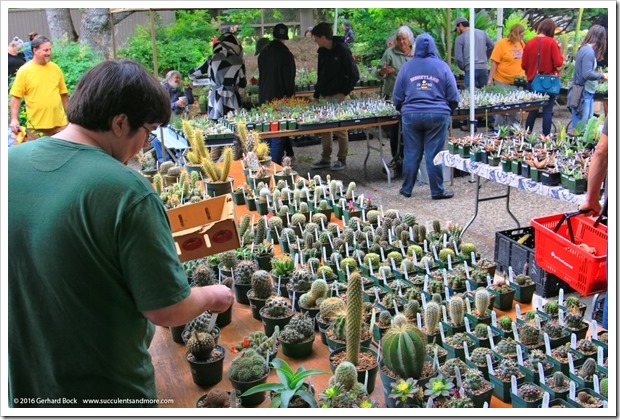 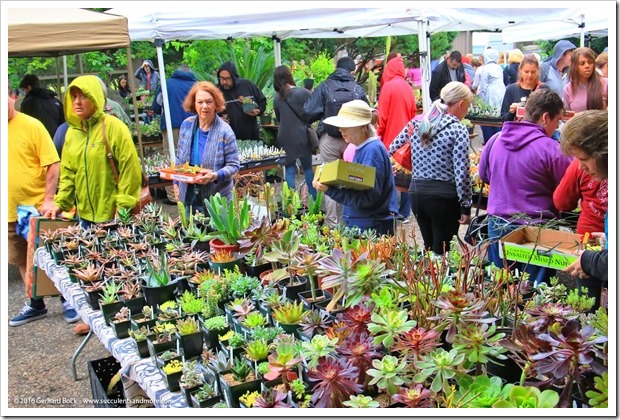 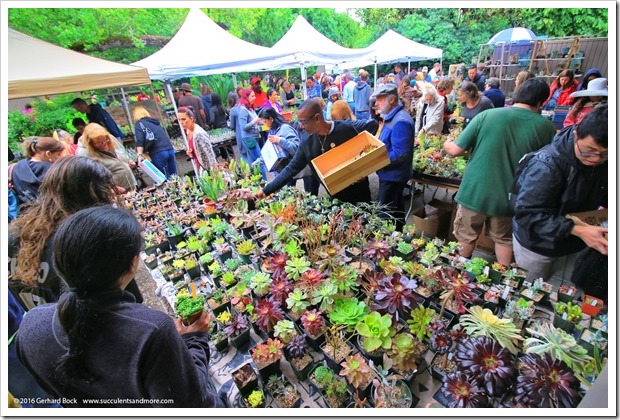 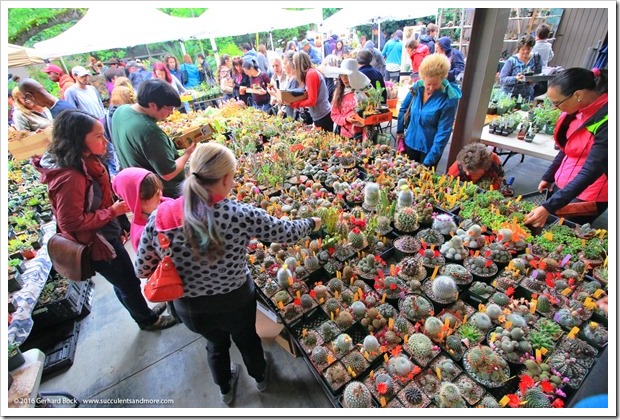 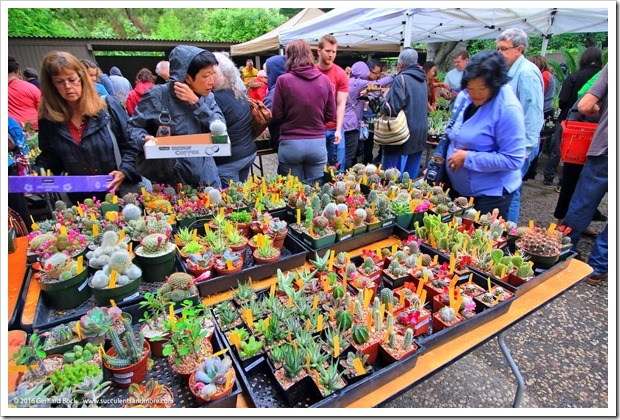 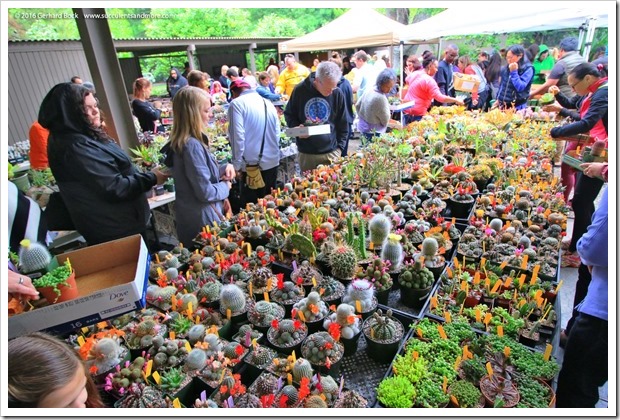 While it’s common for the first three or four hours on Saturday to be really busy, by 1 p.m. things begin to slow down. Not this year. The rush never stopped. There were so many people, the greeters at the door had to do something that had never been done before: limit the number of people who could come inside the courtyard at any given time.

Expecting the same number of people as always, maybe a few more, we had set up two cash registers. As it turned out, that was woefully inadequate; we needed four or five. So imagine the poor volunteers running the checkout getting slammed with more customer traffic than ever before.

And then imagine the registers not being able to accept credit cards because of a faulty modem. Cash or check only, just like in the good old days. There was nothing that could be done about it.

The result was not pretty. At the peak of the pandemonium, it took 1½ hours to get to a register. I was amazed by how many people actually had enough cash (or a check) on them, but quite a few others didn’t. While we tried hard to let people in line know that we couldn’t take credit cards (on Sundays we had signs posted everywhere), we missed some customers who ended up waiting for over an hour just to find out that we wouldn’t be able to run their credit card.

Some left angry and abandoned their plants (who could blame them?), but many others checked their boxes into the plant hotel while they left to get cash. So the relatively quiet plant hotel, which in years past was only used by customers who wanted to park their plants while they went inside to see the juried show, became such a beehive of activity that I ended up working 8 hours non-stop on Saturday and 7 hours on Sunday helping out the regularly scheduled volunteers. I can’t remember the last time I was so exhausted.

In the end, we broke records right and left, not only for the sheer number of visitors but also for sales. Mable Lotz, the coordinator of the Shepard Garden and Arts Center for the City of Sacramento, had never seen anything like it in her decades on the job.

But it’s not all positive. More than a few people were unhappy with the long wait, many more with the cash-only policy. I cannot blame them. If I had been a member of the public, I probably would not have waited in line for an hour or longer just to pay. And I certainly wouldn’t have had enough cash on me.

Somebody I talked to said that we were a victim of our own success. I agree to a certain extent. Our event was heavily promoted, especially on social media, and we were not prepared for what in essence was more than double the usual volume of visitors. But I’m not sure we could have been. And the credit card issue was out of our control since we rent the registers from a vendor.

If you were unhappy with your experience at this year’s event, as a member of the Board of Directors of the Sacramento Cactus & Succulent Society, I would like to assure you that we will take a long and hard look at the lessons learned to find ways to make things better for 2017.

We’ll increase the number of registers and make sure that credit cards will be accepted (hello, Square!). If you have any other suggestions, please be sure to email president@sacramentocss.org.