I already showed you my hands-down favorite at this year’s Pence Gallery Garden Tour, Bunny Jean Cunningham’s playful art garden. None one of the other gardens resonated as much with me, but many had elements I found memorable. Read on to see what caught my eye. The numbering scheme follows the official program given out to ticket holders.

Garden #2 is located on a quiet street half a block from the UC Davis campus. The first thing I noticed was the choice of fencing; a low 3-ft. fence all the way around. Since the property is on a corner, the backyard you see below is completely exposed. (Or is it the front yard? I really can’t tell, and ultimately it doesn’t matter.) 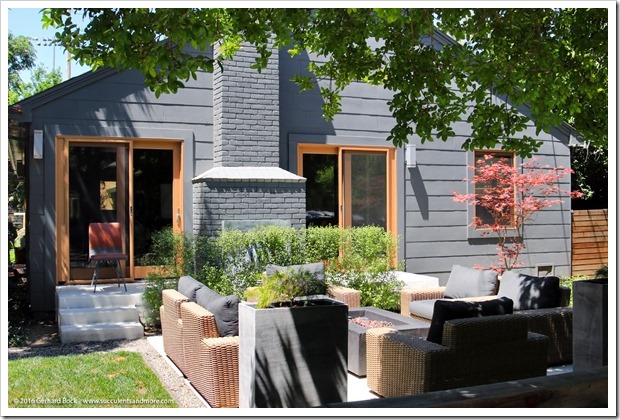 Clearly the homeowners value contact with their neighbors and passers-by more than privacy. I found this approach very refreshing although I wouldn’t be entirely comfortable with it myself.

The furniture, both in the backyard and in the front yard you’ll see later, is clean and modern, repeating the straight geometric lines found throughout the garden design. The color scheme—tans and grays—harmonizes with the color of the house and blends in well without attracting undue attention to itself. 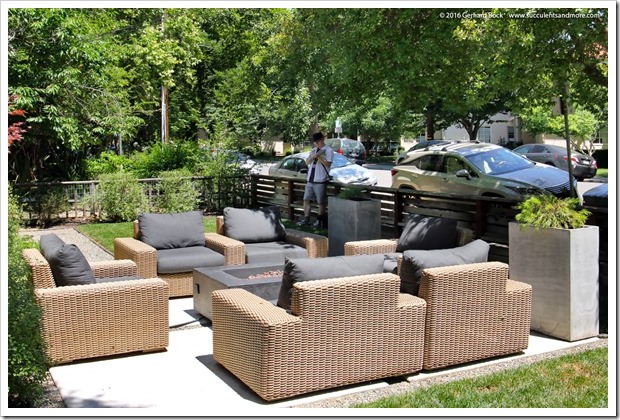 The biggest surprise was this water feature attached to the chimney: 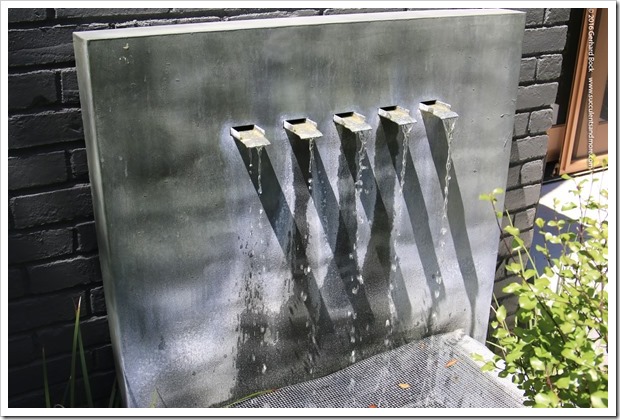 It is surrounded by a low pittosporum hedge (Pittosporum tenuifolium 'Silver Sheen') and all but invisible unless you stand right in front of it. It apparently is very popular with the resident hummingbirds and generates a relaxing sound for human visitors.

The front yard on the other side of the house is just as welcoming and features complementary furniture. It’s a small space, but perfectly functional. 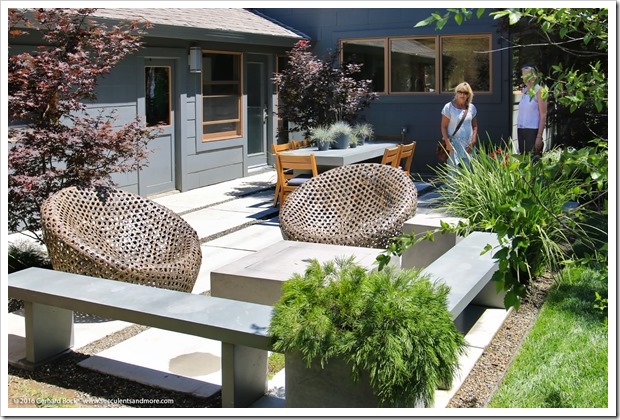 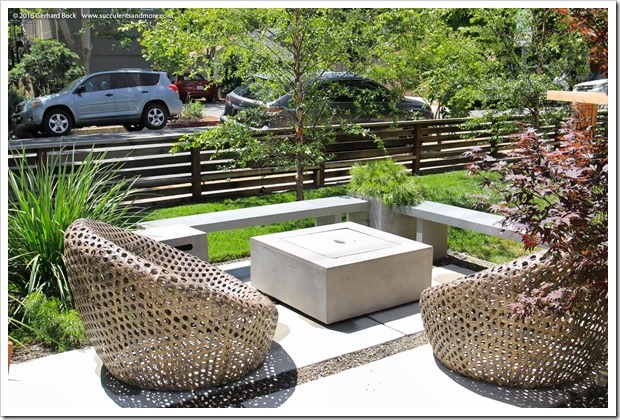 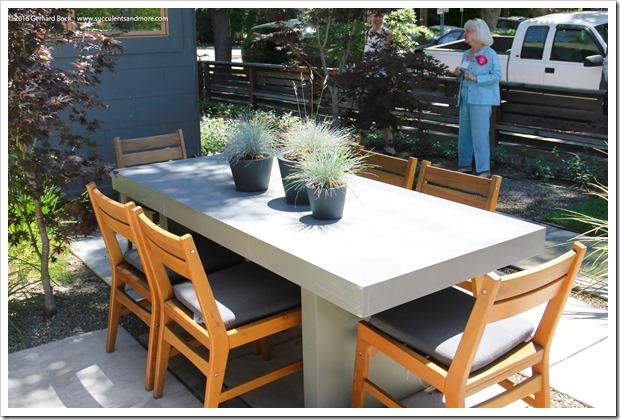 The planting scheme (and palette) is on the minimalistic side but it suits this property well. Overall, I liked this small urban garden very much.

Garden #9 featured a densely planted front yard dominated by a large clump of breadseed poppies (Papaver hybridum). They were a bit past their prime but there were enough flowers left for me to wonder why I’ve never grown them before. Maybe I will next year! 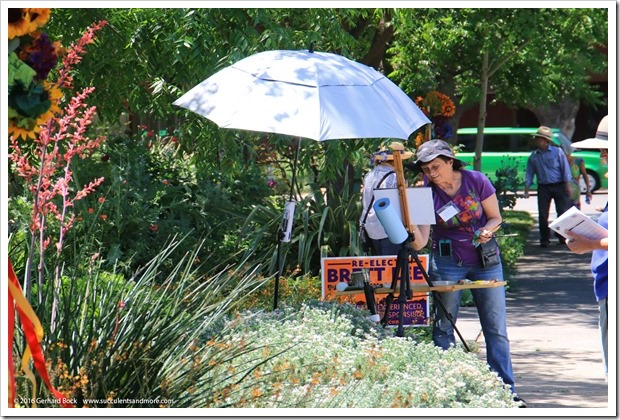 Each garden had a featured artist who was painting a scene during the garden tour. Their creations will be on display (and for sale) at the Pence Gallery from May 31 to June 26, 2016. 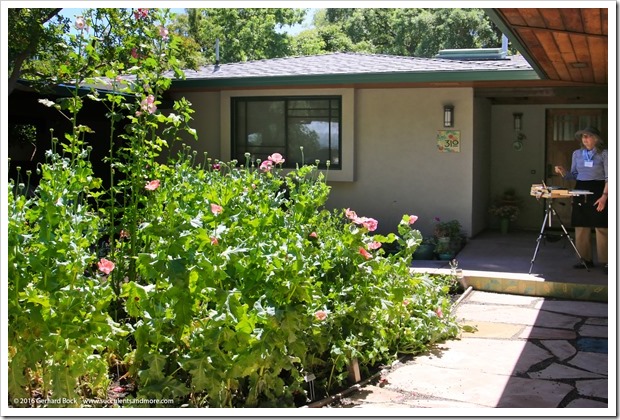 Poppy patch in the front yard 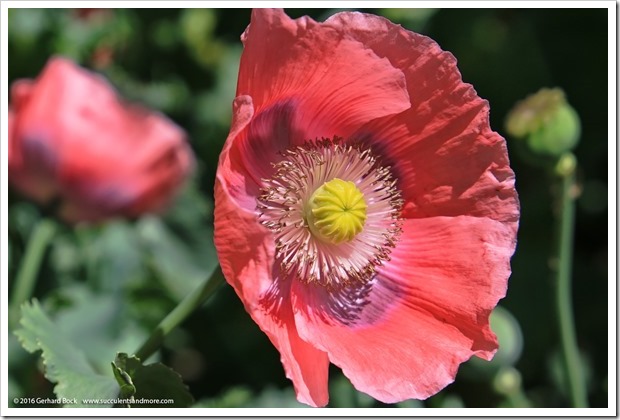 Papaver hybridum ‘Cupcake’ from Annie’s Annuals (according to the garden tour program, the homeowner is a big fan of Annie’s) 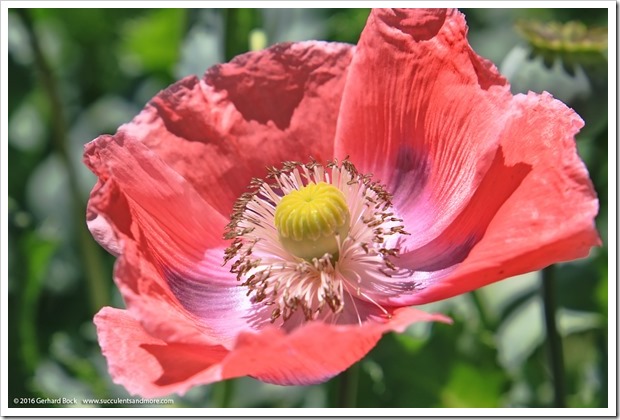 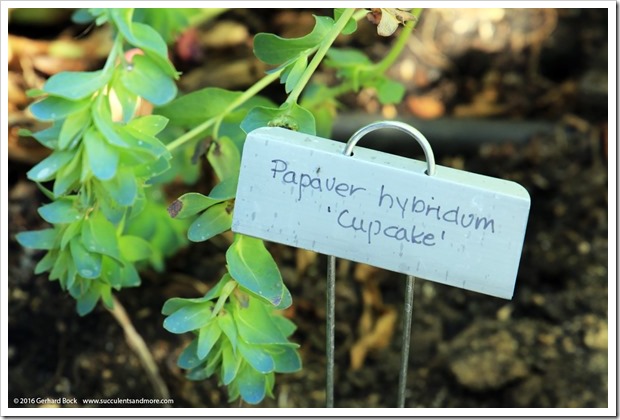 This gardener is serious about her plant tags! 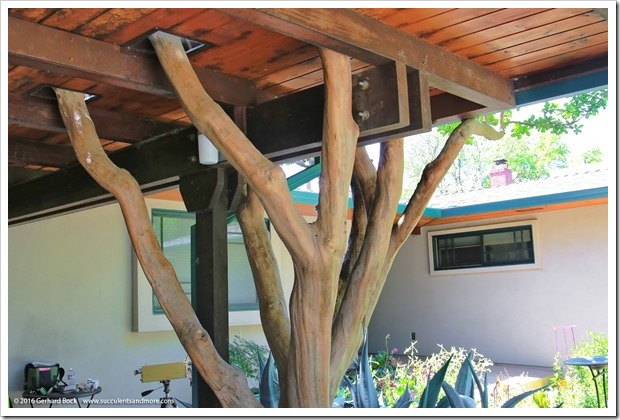 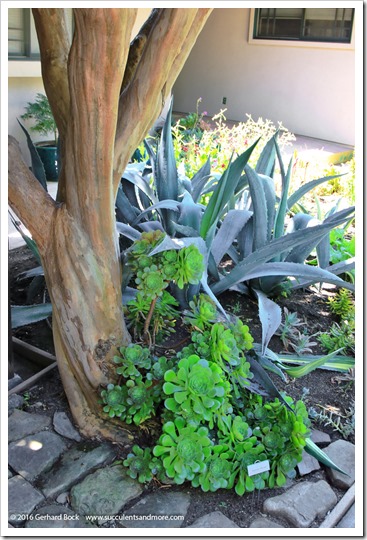 Agave americana and aeoniums at the base of the crepe myrtle

Garden #8 is located right next to garden #9 above. Only the front yard was on the tour. It’s a nice example of a front lawn conversion that should appeal to homeowners who are more comfortable with Mediterranean perennials than desert plants or Southern Hemisphere shrubs. 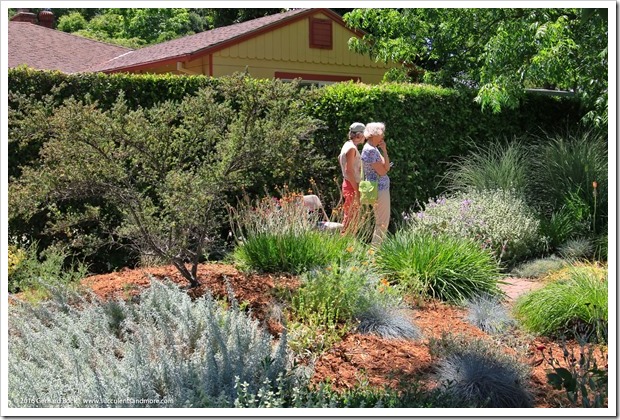 The next garden I will show you is down the street from gardens #9 and #8. It was not part of the Pence Gallery Tour, but if it had been, it would have been my favorite after Bunny Jean Cunningham’s garden. Mannequins, statues, figurines and quirky garden art—plus colorful water-wise plants. What’s not to like here? 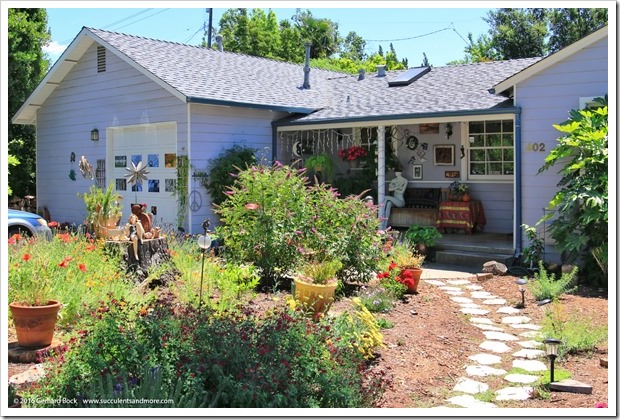 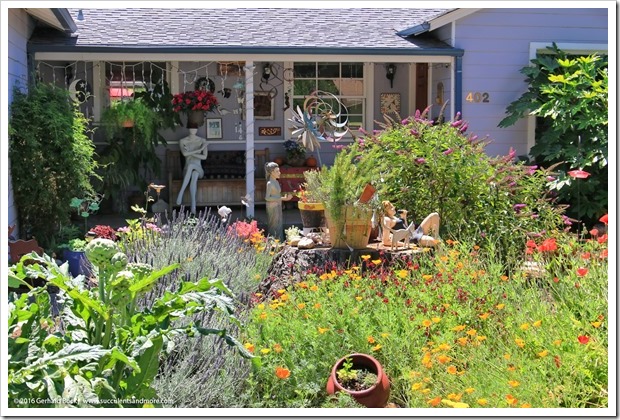 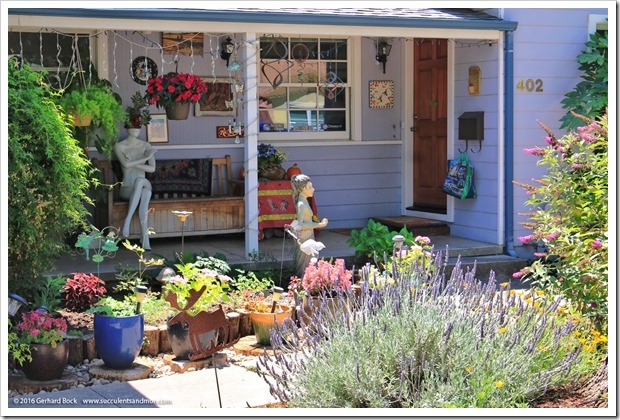 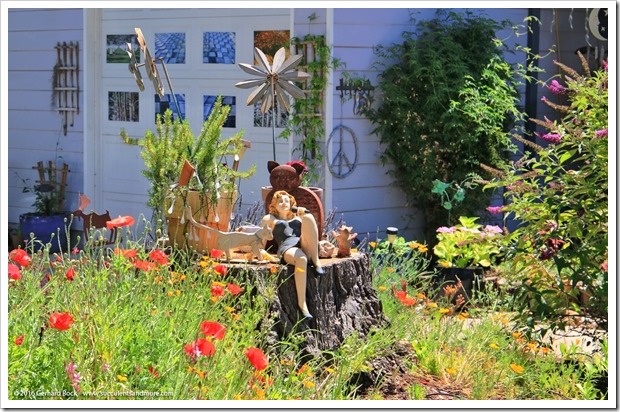 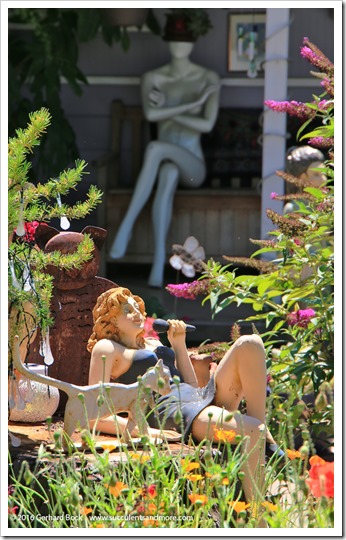 Garden #5 was large—the property is a third of an acre. The write-up in the official program spans two pages and describes the many improvements made by the current owners. The timing of the garden tour was a bit unfortunate since many of the spring-flowering plants were past their prime and the summer bloomers hadn’t kicked into high gear yet. 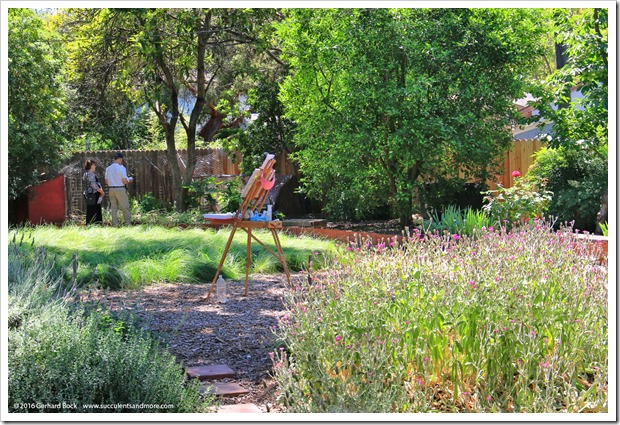 The most memorable feature of this property was the sedge meadow in the backyard. I loved the soft and flowy elegance of the California slender sedge (Carex praegracilis) that replaced the lawn. 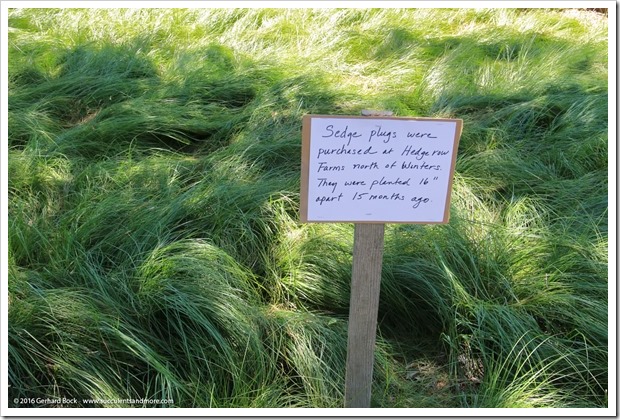 Garden #4 was our final stop. (My wife and I skipped the two “public” gardens, the plantings around the Pence Gallery and the UC Davis Arboretum Terrace next to Whole Foods, because they’re open all the time.) I immediately liked the homeowner when I read this description in the tour program:

I feel a bit silly writing anything about my garden, as I have not done that much noteworthy to it since moving in seven years ago. I did wrestle it to my needs when I first arrived, but since then I have let a lot of the garden just grow.

Seeing the backyard, I realized that the homeowner didn’t give herself enough credit. There is a lot of great stuff here. While the potted succulents on the paved deck near the pool jumped out at me right away… 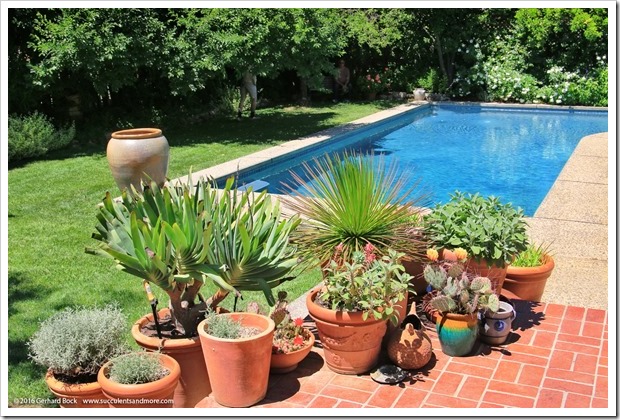 …it was actually the seating area under a large (majestic! spectacular!) olive tree that caught my fancy. What a great place to hang out! 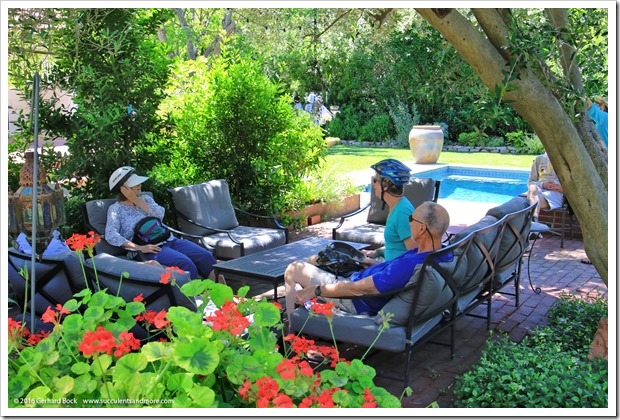 According to the homeowner:

Honestly, we never eat in or sit in the house after the days become warm. The nights are just right for living out under the olive tree on the comfortable sofa and chairs. I have lights in the olive; I put candles in the Moroccan lamps [bought when I lived in France], and even have reading lights on the side tables. 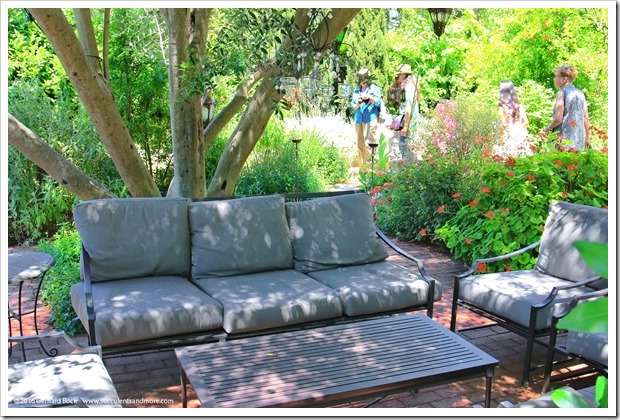 I also liked this smaller sitting area tucked in the far corner of the backyard. The bougainvillea was like a blazing beacon. 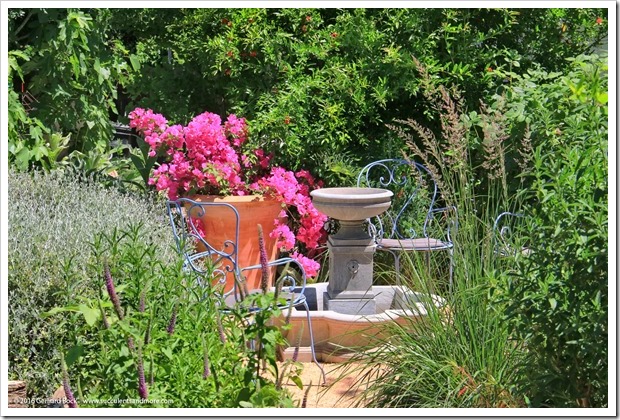 And finally the outdoor eating area under the walnut tree. Decomposed granite is such a great paving material. I’m a sucker for the sound and feel of walking over crushed stone. 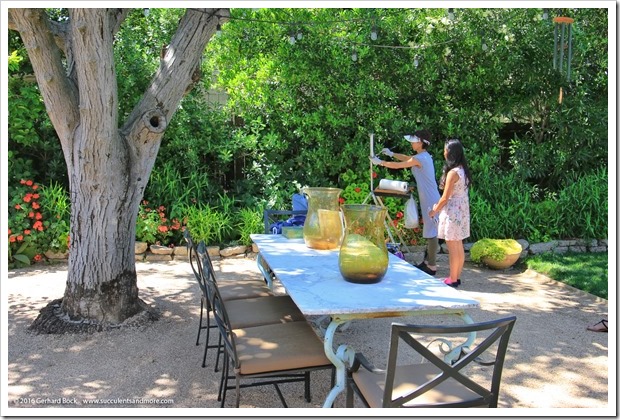 While I would change many of the plants in garden #4 to suit my personal preferences, I found its overall layout and design to be very inviting. If I were friends with the homeowner, I’d be over there all the time.