It’s no secret that I love the Proteaceae family. Most of these Southern Hemisphere shrubs—think of the sugarbushes (proteas), conebushes (leucadendrons) and pincushions (leucospermus) from South Africa, or grevilleas and banksias from Australia, to name just a few—have beautiful foliage, stunning flowers or both.

The pincushions (leucospermums) aren’t all that blessed in the leaf department, but they more than make up for it with their stunning inflorescences. Just take a look at some of the images on Google to see what I mean!

Unfortunately, leucospermums have proven challenging to grow here in Davis. Unlike leucadendrons, grevilleas and banksias, with which I’ve had good luck, leucospermums seem to be more sensitive to the summer heat and winter cold (even in a mild-winter climate like ours). My beloved Leucospermum ‘Scarlet Ribbon’ died a sudden death last summer, probably because the spot it was in was too hot. 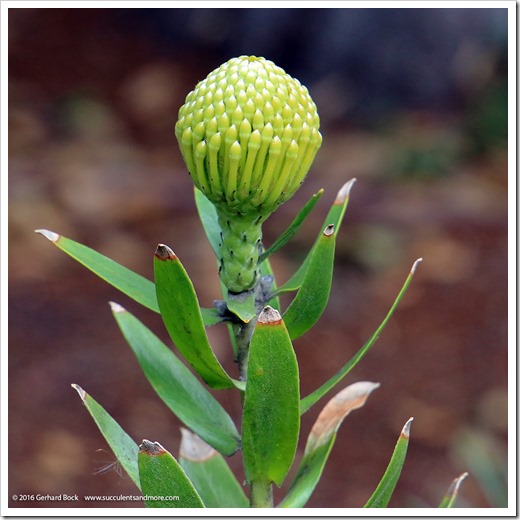 But I have one leucospermum left. It’s a cultivar called ‘Goldie’, which I bought at the Ruth Bancroft Garden 2014 Spring Plant Sale. Plantzafrica.com says it’s a named selection of Leucospermum cuneiforme, a “stout” shrub and the “most widespread” of the pincushions. Other than that, I haven’t been able to find much information about it, especially in relation to other leucospermum species. But I remember buying ‘Goldie’ because Ryan at Ruth Bancroft Garden thought it would do well in my garden. And it has done OK, growing in a container on the backyard patio (see photo at the bottom of this post).

In early January, I noticed what I was hoping was a flower bud, its first ever. There were other nubbins I took to be flower buds, but they turned out to be new leaves. But this one bud did indeed became a flower. In the space of two weeks, it turned from what you see above into this: 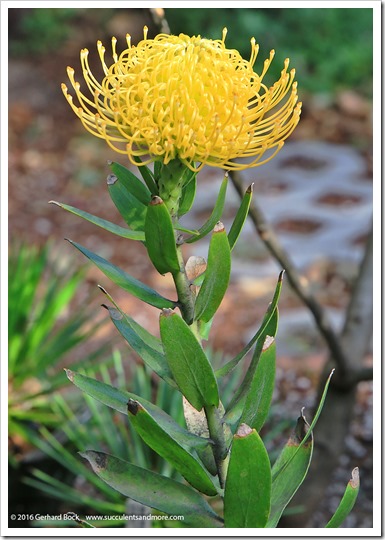 And it’s only been getting better. I cannot help but take photos of it from all angles. If you think this post has too many pictures of the same flower, rest assured I’m only showing you some of them. 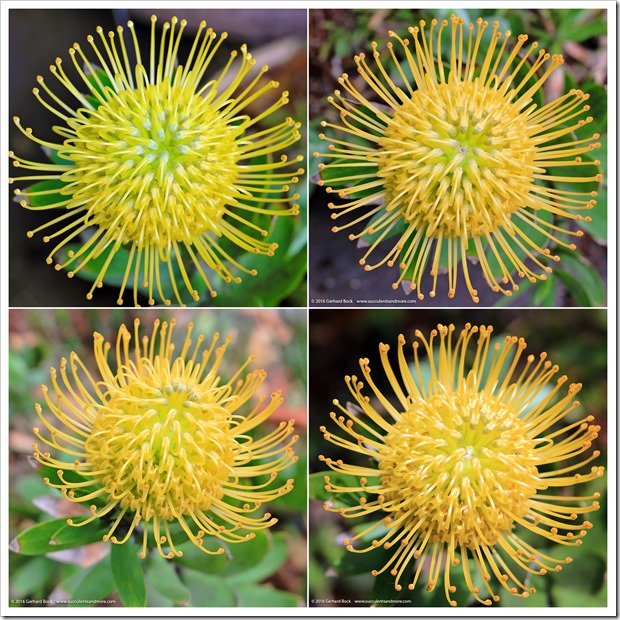 I think this flower is perfection. 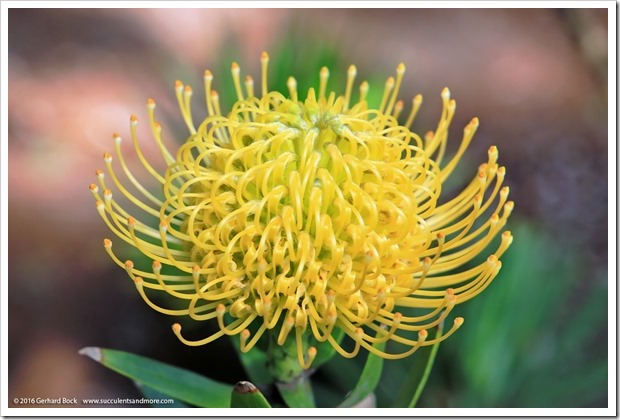 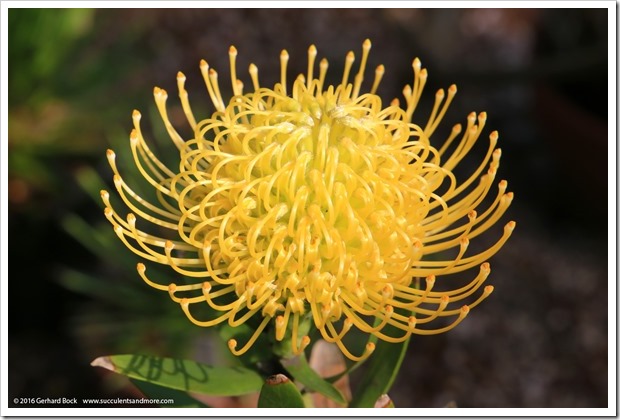 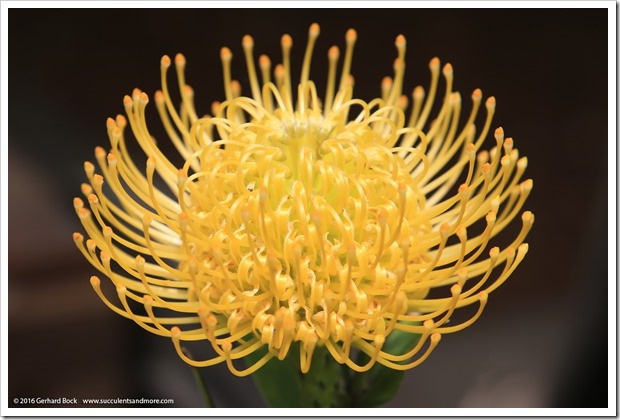 I will admit that I’m partial to the red and orange pincushions, but there’s something so cheery about this shade of yellow. 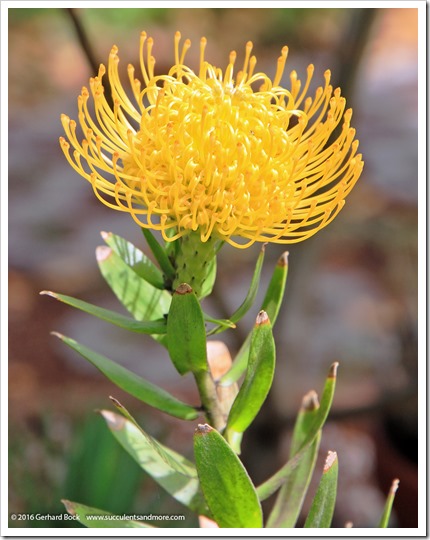 OK, a few more photos, just because I can. 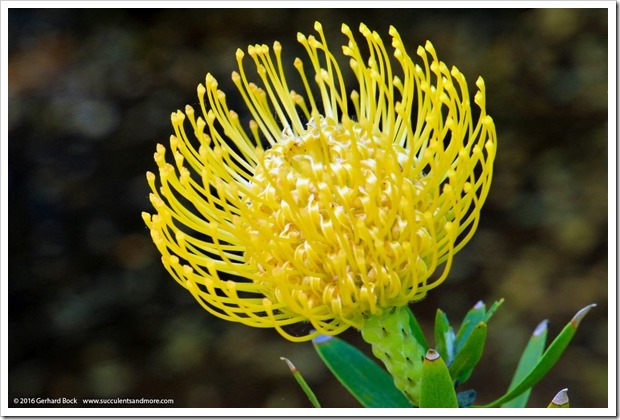 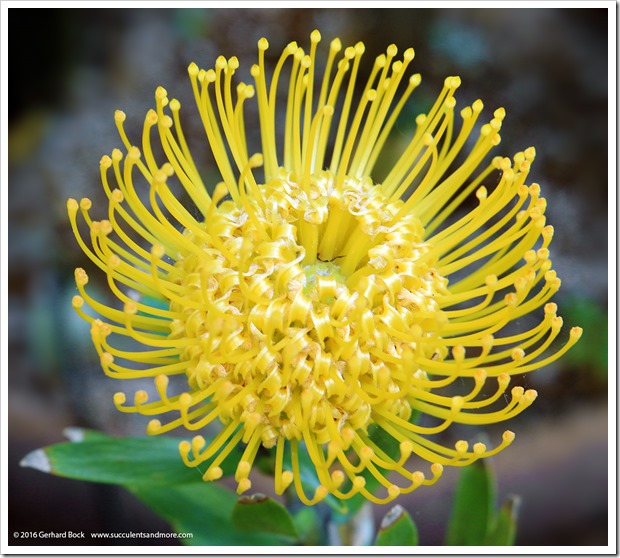 Here is the entire plant. It’s not very large. I may move it to a larger container so it has more room to grow. But first I’ll wait until it’s done flowering. 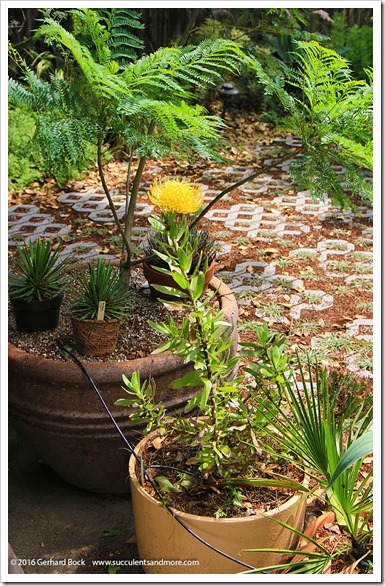