Palo blanco: in love with another desert tree

Many of you are familiar with the palo verde, not least because of my obsession with it a few years ago (I did plant three in the front yard). Now I have another “palo” on my mind, this time palo blanco.

While the common names of these two trees are similar—palo verde means “green stick” in Spanish and palo blanco means “white stick”—and both are in the pea family (Fabaceae), they’re not all that closely related. In addition, the common name palo verde is used for several species of Parkinsonia, while palo blanco refers to just one tree: Mariosousa willardiana, an acacia from the Mexican state of Sonora (*).

The first palo blanco I ever saw was at the Desert Botanical Garden in Phoenix, AZ. They have dozens of them throughout the garden. The photo below shows the small cluster in the Ottosen Entry Garden: 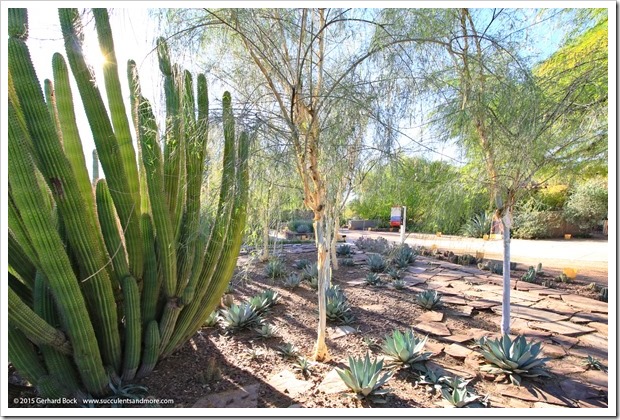 These are about 12 ft. tall and have a little more to go. The adult size is 15-20 ft.; growth is fairly slow although supplemental water in the summer and fall is said to speed it up.

Here are more photos of the same group. In the bottom two you can clearly see the peeling bark, a hallmark of the palo blanco and for me one of its most striking characteristics. 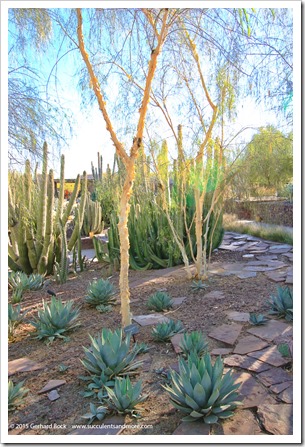 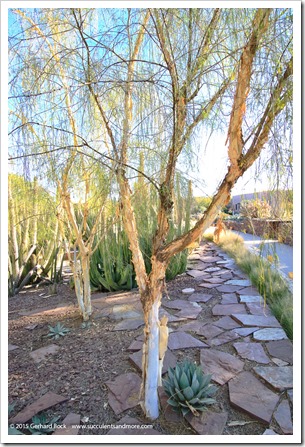 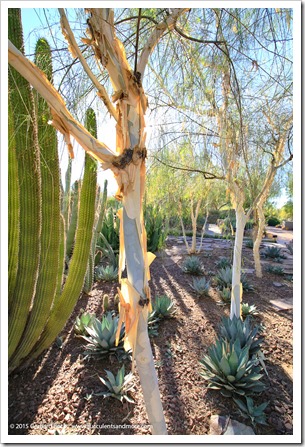 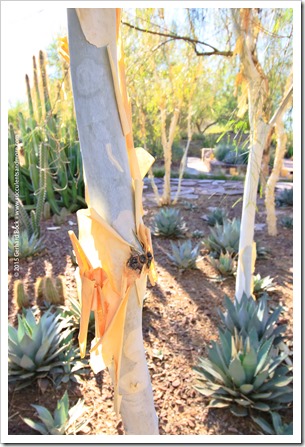 In Northern California, the palo blanco is virtually unknown. Conflicting information about its cold hardiness (and an almost total lack of availability) may have something to with it. Some sources still say the palo blanco is only hardy to 28°F but anecdotal evidence from folks who actually grow it suggests that it’s probably hardy to below 25°F, which is good enough for where we live.

Landscape designers in Southern California and Arizona, on the other hand, are beginning to use the palo blanco more and more. As the design and architecture community Houzz says, “The wispy beauty of the palo blanco tree belies its ability to handle the tough growing conditions of the desert, including areas with reflected heat. [it] is the perfect tree for small, narrow spaces, such as a side yard.”

Here are some more photos of palo blancos from the Desert Botanical Garden: 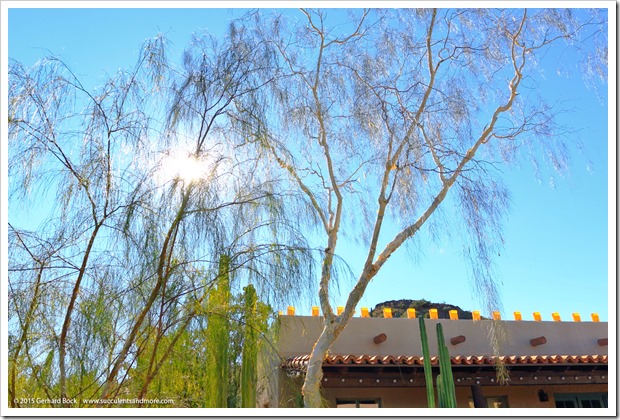 This specimen has reached is mature height. 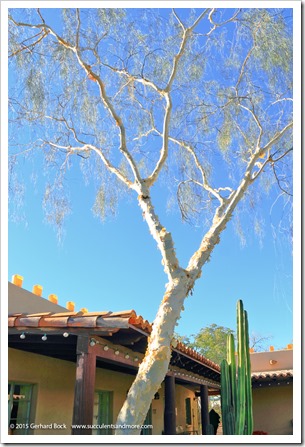 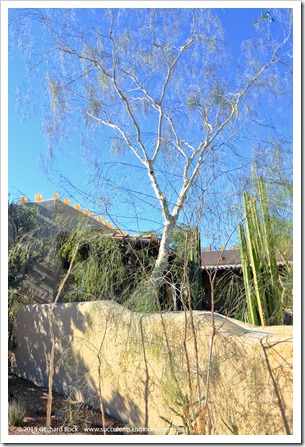 It has a striking presence without overwhelming the setting. 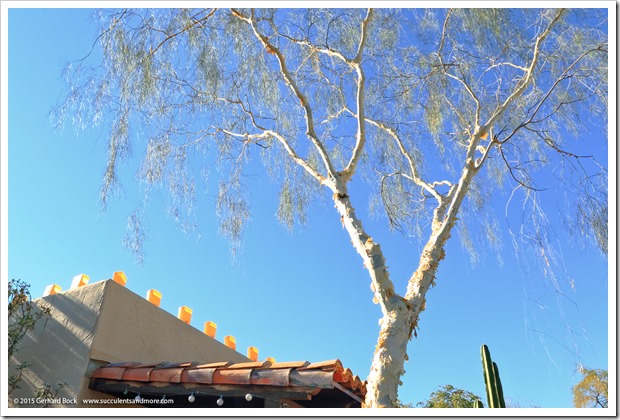 When I was in Arizona last winter I was looking for a small palo blanco that would fit in my car but all I could find were large boxed specimens. Admittedly I didn’t have a clear idea where I put it in our garden, but I knew I wanted one. But I had to let the idea go—until last month.

That’s when I received one of those droolworthy “Just In” emails from the Ruth Bancroft Garden Nursery: 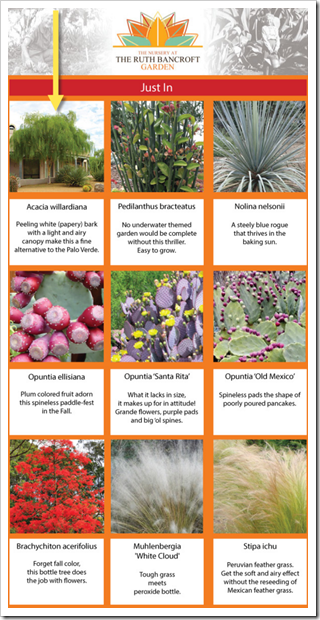 There is was, my willowy palo blanco! And with our front yard conversion just around the corner, I knew exactly where it would go: in the middle of what is currently the front lawn. That would also make our project eligible for a Turf Replacement Rebate from the California Department of Water Resources, which requires a tree to planted as part of the turf removal.

This morning I went to the Ruth Bancroft Garden to pick up my palo blanco, and I noticed they had a very nice specimen planted out: 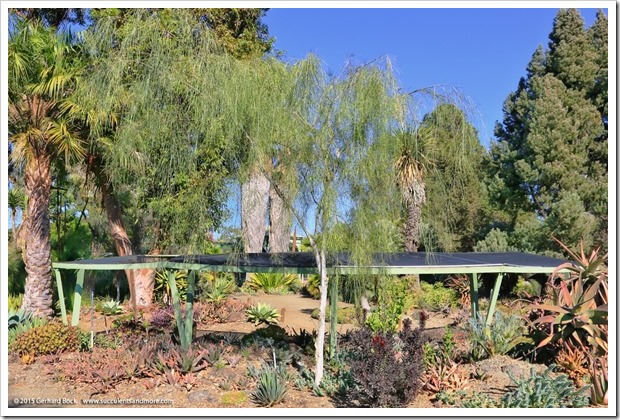 It’s obviously doing well there, which gives me hope that mine will thrive in my front yard.

Here is my specimen: 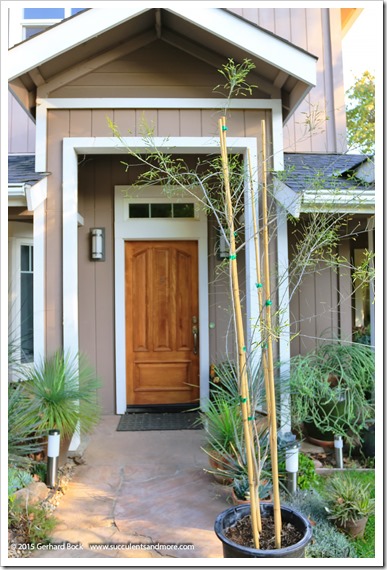 It’s dropped some of its leaves, probably because of the time spent in transport (it came from Mountain States Wholesale Nursery in Glendale, Arizona), but they will regrow quickly.

As you can see, the leaves are tiny and they grow at the ends of long phyllodes, essentially modified petioles. They are able to photosynthesize even when there are no leaves on the tree, allowing it to survive long periods of drought. 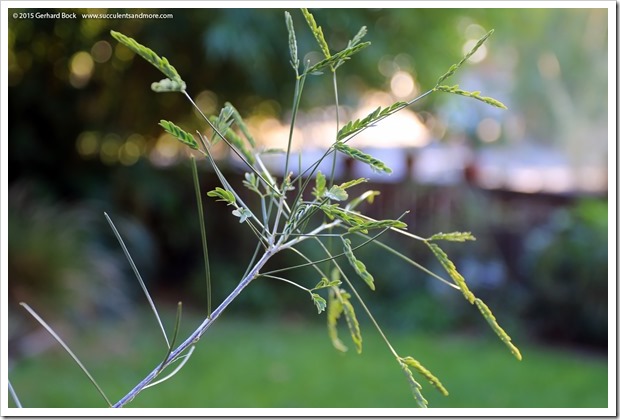 It’ll be another month or two before the front lawn is gone and the succulent mound that will replace it has been built, so for now my palo blanco will stay in its nursery container.

* For 150 years, the botanical name of the palo blanco was Acacia willardiana. However, in the wake of the 17th International Botanical Congress held in Vienna, Austria in 2005, the genus Acacia underwent a fiercely contested split that is still a hot-button topic in botanical circles. The 1,000+ Australian species (usually referred to as “wattles”) retained the genus name Acacia while the approx. 160 thorny species from Africa, Asia and Latin America became the genus Vachellia, and the remaining 200 species from Africa, Asia and Latin America were split into the genera Senegalia, Mariosousa and Acaciella. For a detailed accounting of these developments, see Kull, C.A. and Rangan, H. (2012). Science, sentiment and territorial chauvinism in the acacia name change debate. In Haberle, S.G. et David, B., Peopled Landscapes: Archaeological and Biogeographic Approaches to Landscapes. Canberra : ANU E-Press. 197-219 (PDF here).