Out of the three palo verde trees (Parkinsonia) we planted in the last couple of years, the hybrid called ‘Sonoran Emerald’ in the desert bed along the street has grown the fastest and the largest. In fact, too fast and too wide too soon. While we had been trying to shape it since day 1, it became clear in recent weeks that we simply hadn’t been aggressive enough. Look at the first three photos and you’ll see what I mean. 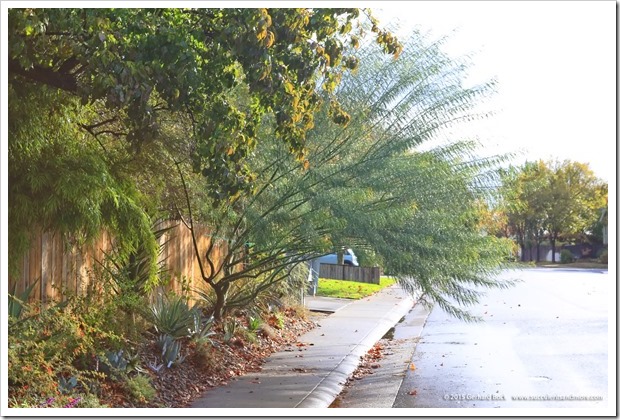 Yes, the branches in the front were forming the canopy over the sidewalk that I had envisioned. However, they were far too low too the ground—about 5 ft. above the sidewalk. This forced pedestrians to either duck and walk in the street. 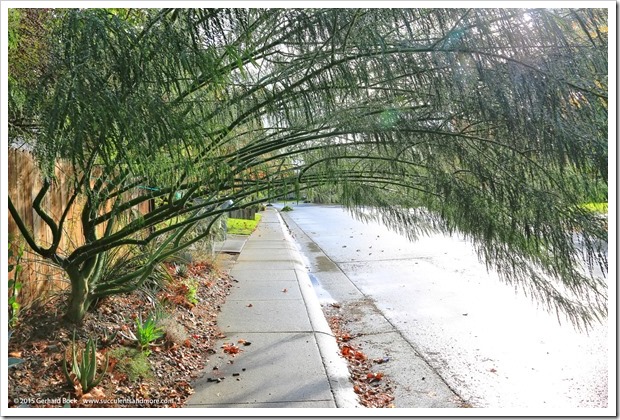 Not even the street was safe from the tree. Cars were having to swerve towards the middle to avoid the branches. The situation got worse in the last week. With rain falling three consecutive weekends in a row—not much, but still—the ground was getting soft, and the top-heavy palo verde was beginning to lean towards the street. Time to do something about this! 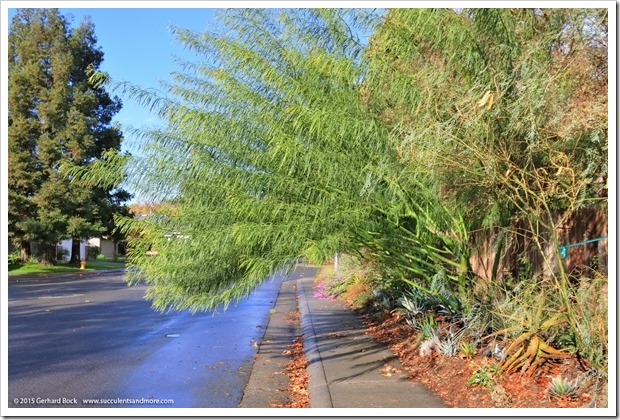 Unfortunately, there was no gentle solution. We had to be aggressive and remove most of the branches leaning almost horizontally over the sidewalk. If I had followed the advice of my gardening friend Sue last year this could have been avoided, but it is what it is.

The electric reciprocating saw made quick work of it. 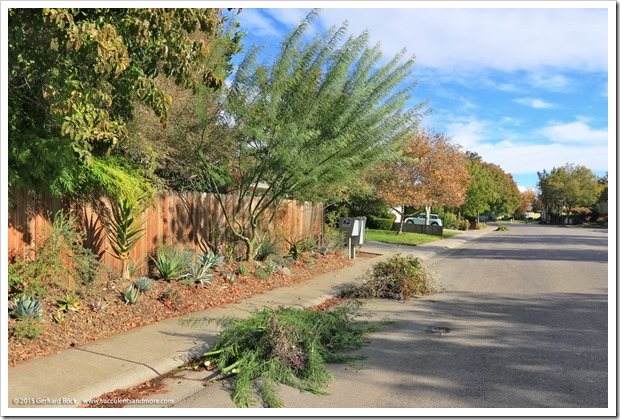 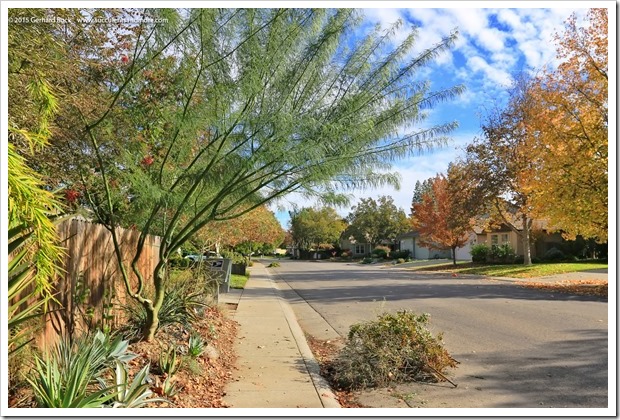 Here’s the ‘Sonoran Desert’ palo verde after its surgery: 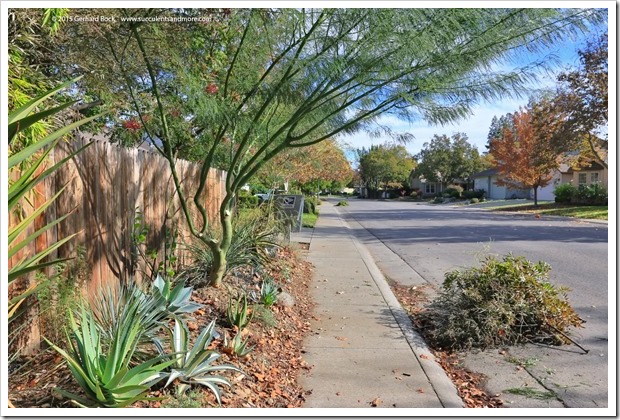 Even very tall people can now walk under it without hitting any of the branches. 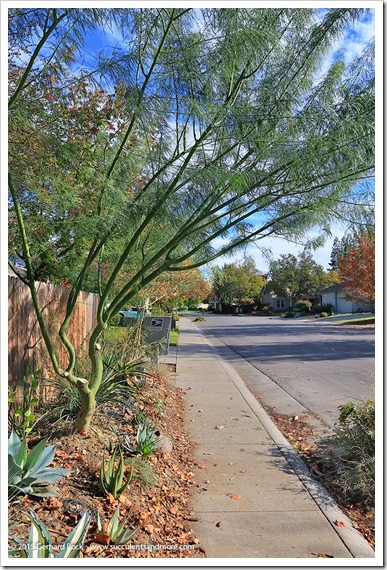 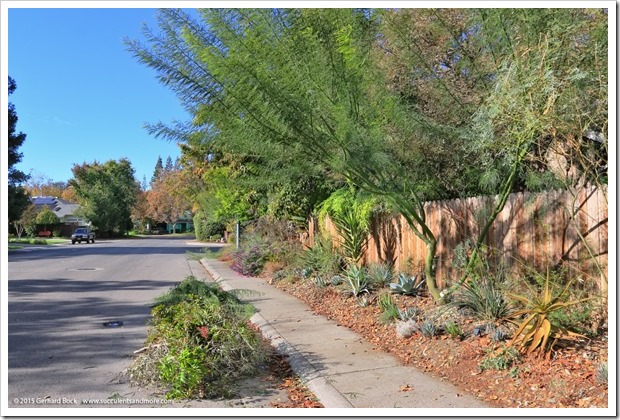 It made me sad to see so much of the tree in the gutter, waiting for yard waste pickup: 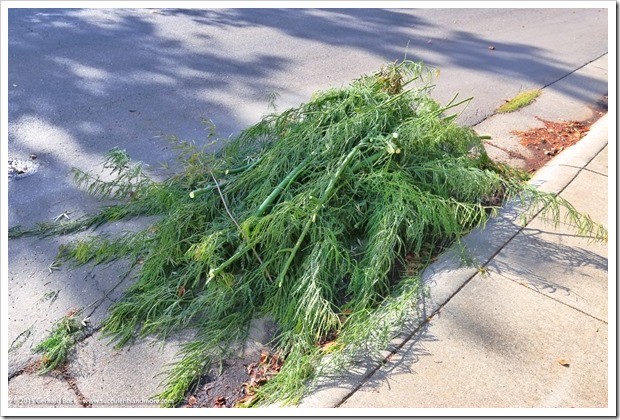 The amputations we performed left very unsightly scars on the tree. I’m tempted to apply a green stain to make them less visible, but that’s probably not a good idea. I’m hoping that over time the cut surfaces will darken so I won’t notice them as much. 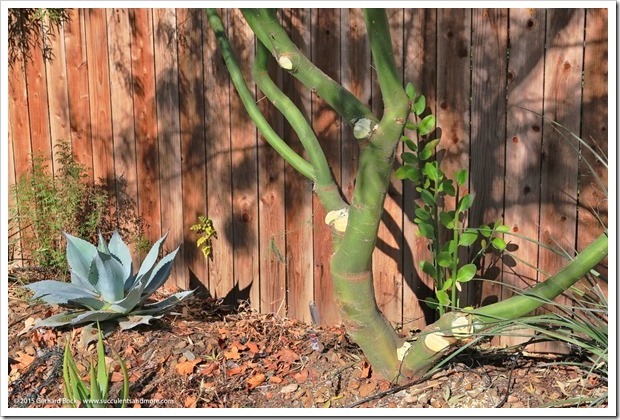 The ‘Desert Museum’ palo verde at the corner received a trim as well, but since it’s much slower growing (the soil it’s planted in is quite compacted), it didn’t need much work. 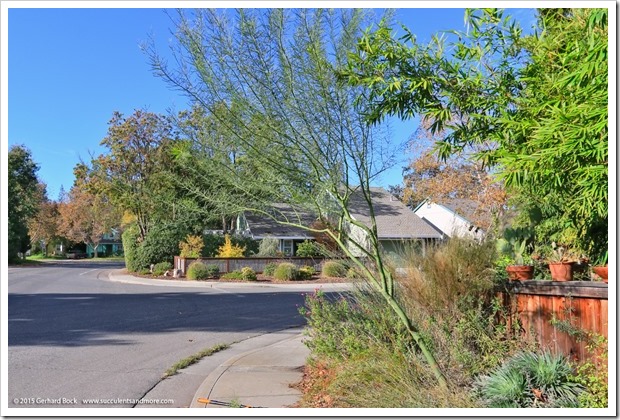 Lesson learned: Don’t be shy about shaping a fast-growing tree while it’s young.