More often than not I rag about the big box garden centers—Home Depot, Lowes and their ilk—either because their plant selection is outdated (too many thirsty annuals, not enough climate-appropriate perennials or succulents) or their plants are not well cared for (typically overwatered).

However, in recent years things have improved. It was a slow process at first, but the worse the drought in California got, the more water-wise plants I began to see. Now both Home Depot and Lowes have their own line of landscape succulents, often displayed in a prominent spot at the garden center entrance. Quality control is still an issue (read this post on a recent aloe mite sighting at the Home Depot in Morgan Hill, CA), but with proper employee education, this could be solved fairly expediently.

Aside from the small 2” and 3” succulents from Altman Plants, typically found in their own display inside the garden center, Home Depot and Lowes don’t carry a large selection of landscape succulents. Usually there are fewer than a dozen different varieties in #1 cans and up. Out out those, two or three might be agaves. So you’d think that they carry the most popular kinds—the likes of ‘Blue Glow’, ‘Blue Flame’, ‘Cornelius’ etc. But for reasons I cannot fathom, the agaves I’ve seen for sale at Home Depot lately have been anything but predictable. Here are two cases in point.*

A selection of agaves in #5 cans was displayed right outside the garden center entrance. They were priced at $22.98, which is great for plants that size.

Agave geminiflora (right) is a good choice for the Sacramento area. With its dozens of flexible spaghetti-strap leaves adorned with curly white hairs, it’s not only a very ornamental species, it’s also quite friendly to humans.

Agave striata (left) is just as common and ornamental but much more pokey. 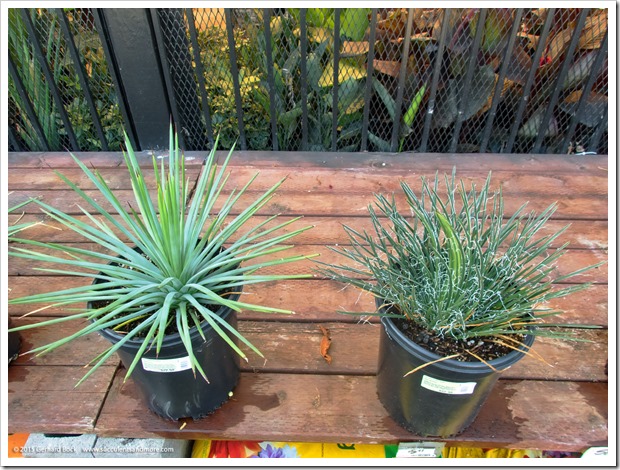 Now it gets strange. The third species they carried was Agave garcia-mendozae. 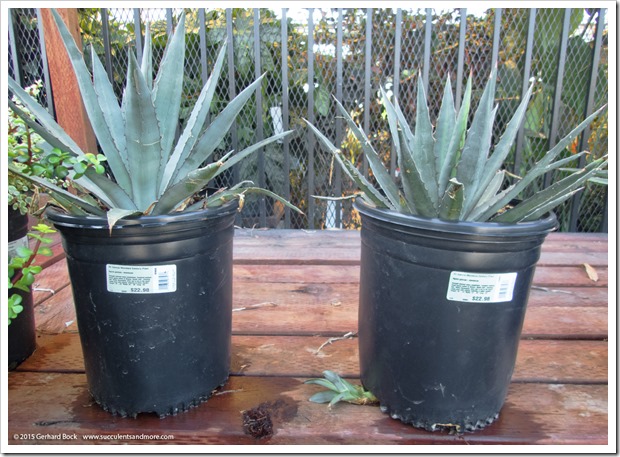 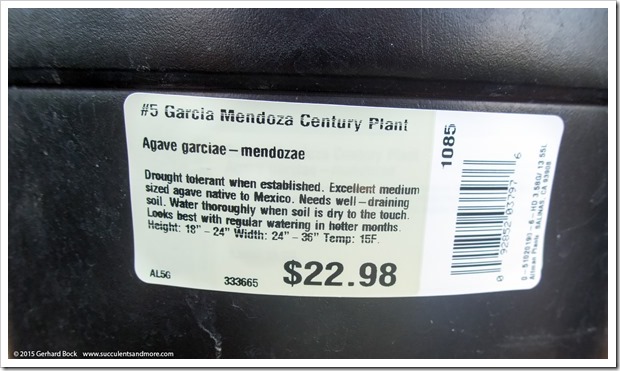 If you haven’t heard of it, don’t feel bad. In the agave parthenon, it’s definitely one of the lesser known species. While many of the common agave species have been in cultivation for 200 years or more, Agave garcia-mendozae wasn’t even formally described until 2002. Named in honor of Mexican botanist Abisaí García-Mendoza, it’s closely related to Agave horrida and Agave kerchovei (not exactly household names either). Personally, I don’t think it’s all that attractive, but it’s good to 15°F. That make it suitable for locations where less hardy species would fail.

I should say kudos to Home Depot for offering an agave so rare, but I’m of two minds about it. Since the space they dedicate to agaves is so small, I think it would make more sense to offer a cultivar that would appeal to more people, like the aforementioned ‘Blue Glow’ or ‘Blue Flame’.

A selection of agaves right at the garden center entrance was a welcome sight. #1 cans were priced at $5.98—a steal. Unfortunately, the labels were generic. All they said was “Agave species.” I recognized Agave parrasana, on the left in the next photo, but I have no idea what the species on the right is. At this size, it could anything from the über common Agave americana to something quite a bit more exciting like Agave zebra (a very long shot). 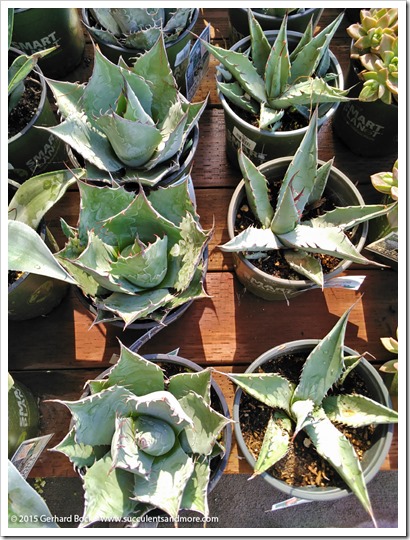 The Agave parrasana were perfection, though. If I didn’t already have four of them, I would have gotten a few more. In my book, Agave parrasana is one of the most beautiful agaves (check out this photo I took last week at the Ruth Bancroft Garden in Walnut Creek) and eminently suited for smaller gardens. 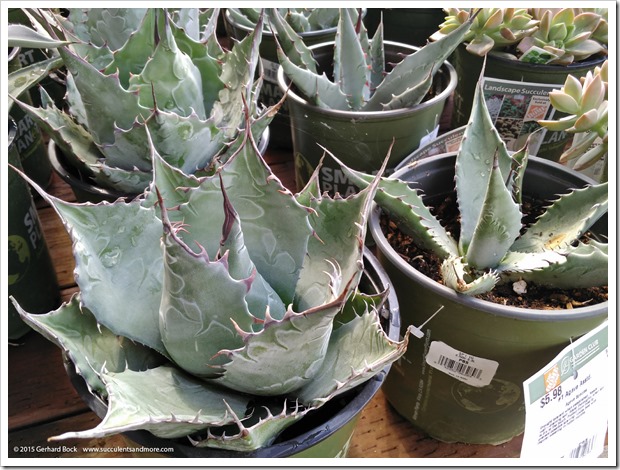 In the #5 size (nominally 5 gallons, but actually a tad under 4 gallons), there were two species to choose from: Agave stricta (right in the next) photo, a close but less user-friendly relative of the Agave striata you saw above, and Agave cupreata (left), a more compact relative of the cow-horn agave (Agave bovicornuta). 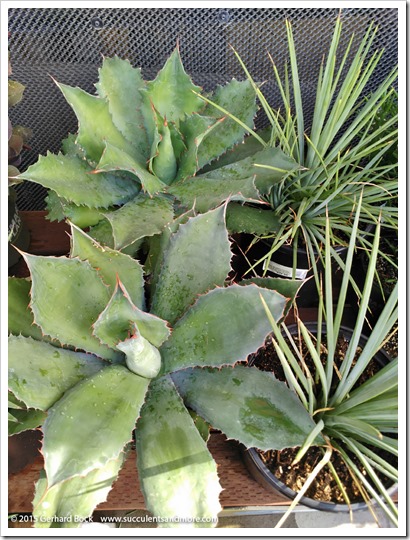 Just like Agave garcia-mendozae, Agave cupreata is not commonly seen in nurseries. I think it’s aesthetically striking but its teeth are ferocious so I wouldn’t plant it near a walkway. Again, why carry such a specialty plant that appeals to only a very small number of customers?

Having said that, I thought the Agave cupreata you see on top in the photo above was so perfect, I couldn’t resist. This might be the first agave I’ve ever bought at Home Depot. I’ll have a separate post about it later this week. 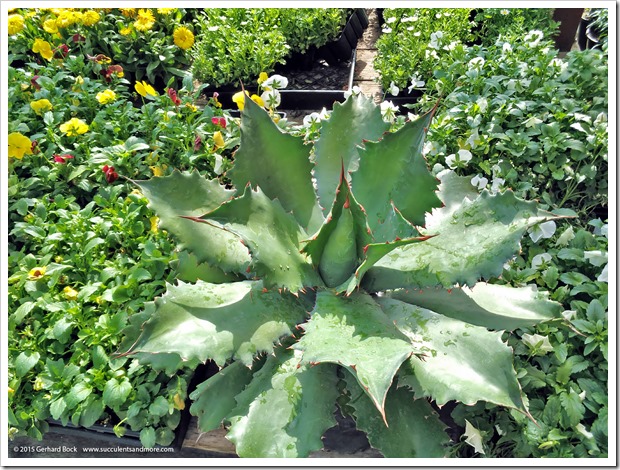 While Home Depot will never be my go-to nursery for anything, let alone agaves (my heart belongs to the Ruth Bancroft Garden nursery), I can’t totally count it out either. As it proved today, it’s good for an occasional surprise.

* Typically I don’t go to Home Depot or Lowes for months at a time but because of a painting project I’ve been to two different Home Depot locations in the Sacramento area within the last four days.

Disclaimer: What I said in this post refers to big box garden centers in Northern California. Elsewhere the situation might be completely different.