One of the permanent fixtures of the front yard are two moss green urns on either side of the front door. We’ve had them since 2007 and they’ve been home to a variety of things, including feather reed grass (Calamagrostis × acutiflora ‘Karl Foerster’) and Golden Goddess bamboo (Bambusa multiplex ‘Golden Goddess’). 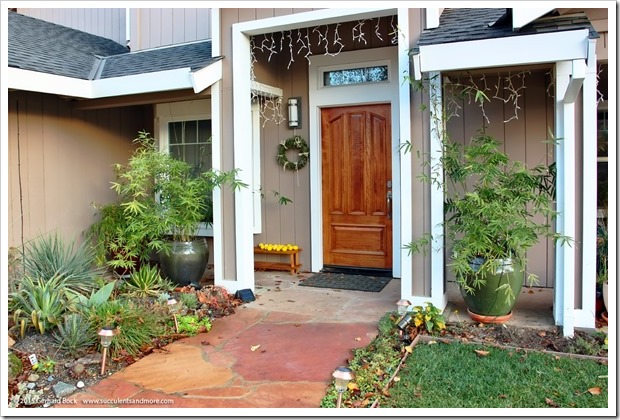 In their most recent incarnations, the urns contained a variety of aeoniums (cuttings from the backyard). They looked good from fall through spring. In the summer, however, aeoniums go dormant and look terrible. So ultimately, they turned out to be the wrong choice for this prominent spot. The straw that broke the camel’s back was a nasty mealybug infestation, especially in the urn on the right side. I let it go longer than I should have, but this morning I finally decided to spring into action.

Read on to find out what I did. 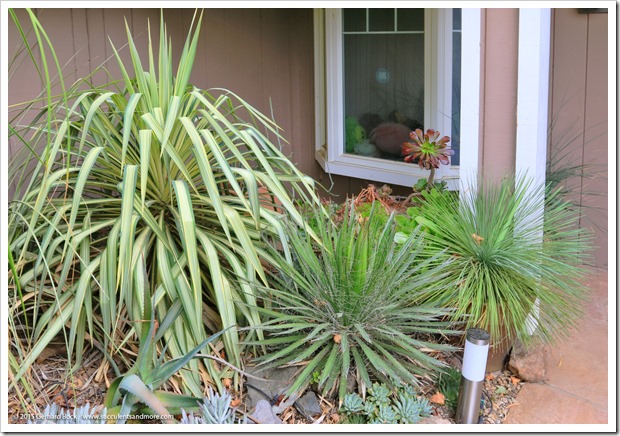 See the Aeonium ‘Cyclops’ in the middle of the photo? That’s where the urn is. Coincidentally, it’s the only aeonium I was able to save. 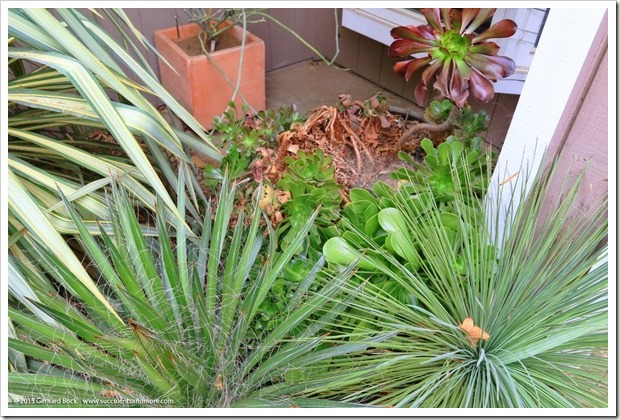 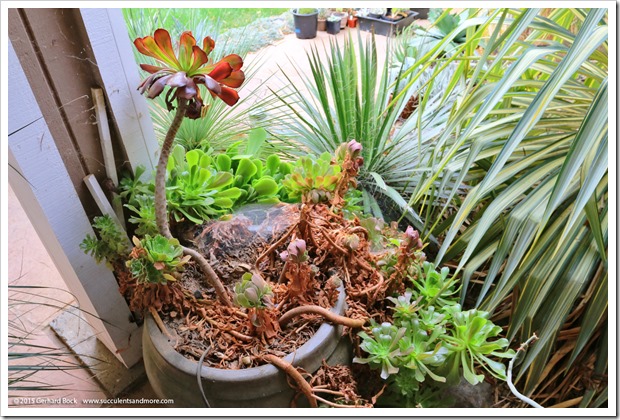 View of the same urn from behind. ‘Cyclops’ is on the left. The green aeoniums are either A. arboreum or A. canariense; I can never tell the difference. 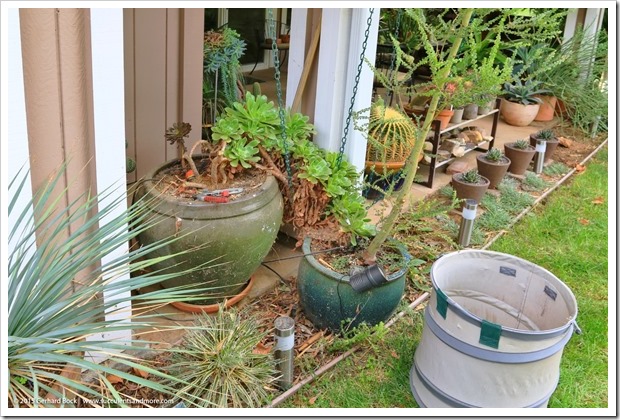 Rule # 1 of blogging: take pictures of everything, before and after. I remembered that half way through ripping out the aeoniums in the urn. 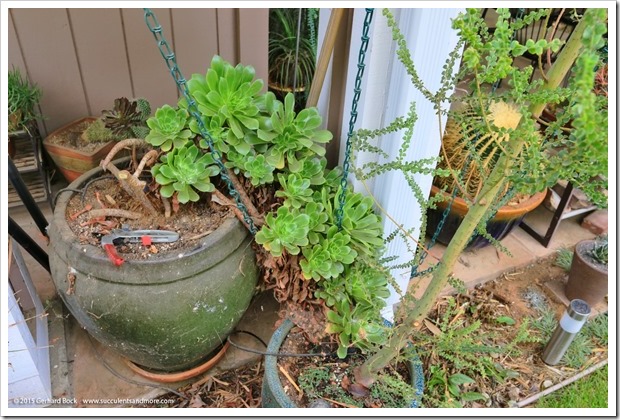 Not too bad from a distance… 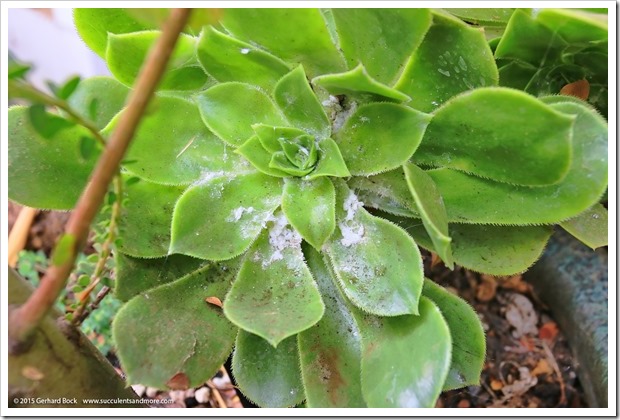 …but up close: YIKES! 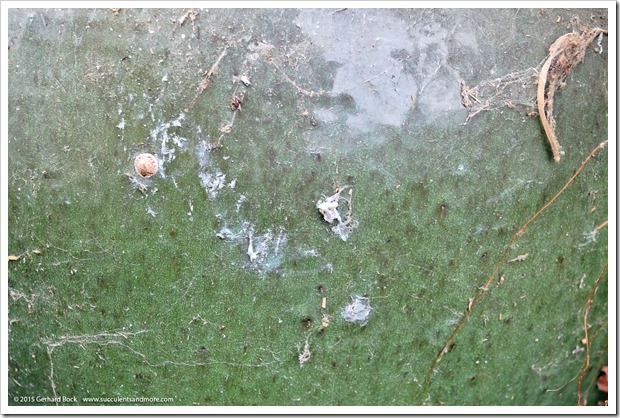 Mealybug stuff adhering to the side of the pot 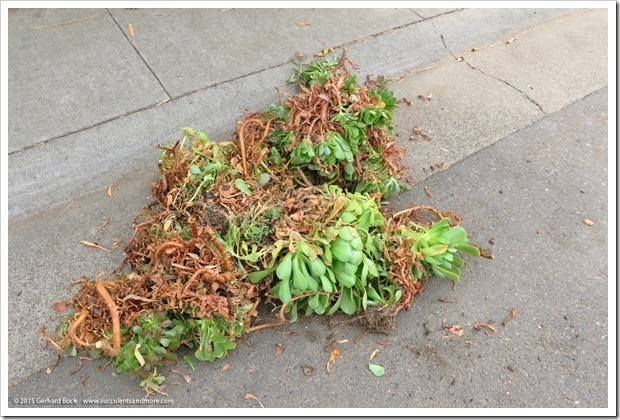 These are all the aeoniums I ripped out. Into the yard waste they went.

I’d been thinking for a while about what to replace the aeoniums with. I considered a wide variety of things, ranging from dwarf olive trees to agaves. Ultimately, I decided to use what I already had. Before pulling the trigger, I thought it would be wise to do a dry run, i.e. put the potted plants on top of the urns.

Here’s the urn on the right with a pencil milk bush (Euphorbia mauritanica): 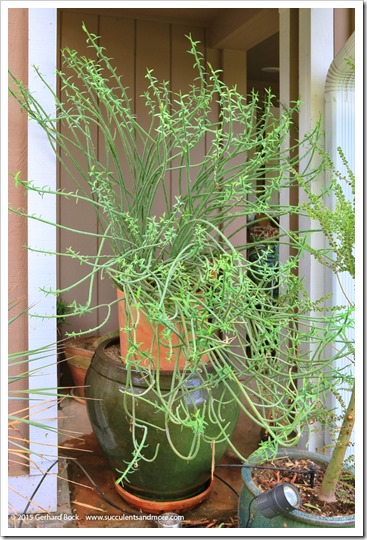 And the urn on the left with Beaucarnea gracilis, a relative of the common ponytail palm (Beaucarnea recurvata): 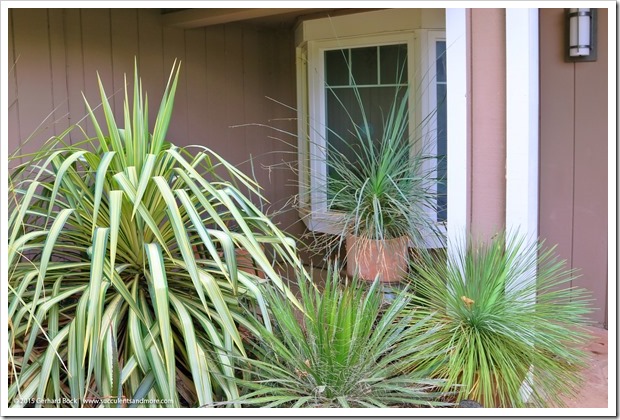 Both looked great so I into the urns they went: 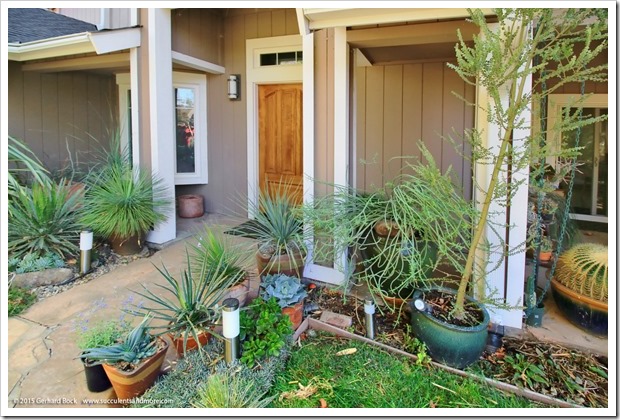 View of the front door area Euphorbia mauritanica from the front 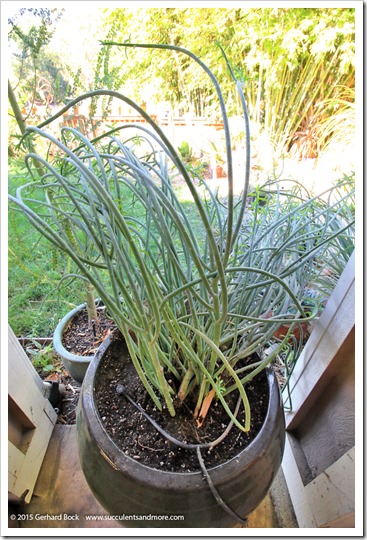 Euphorbia mauritanica from the back 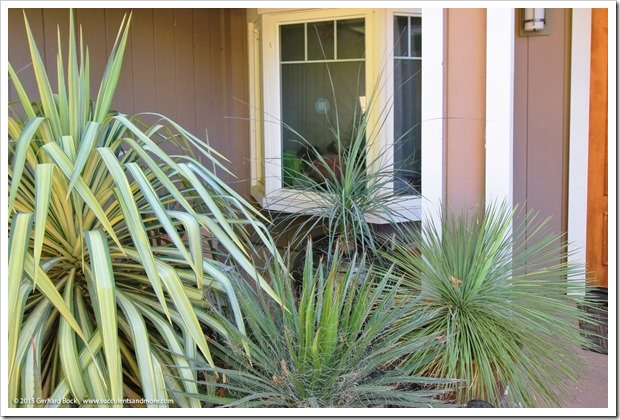 Beaucarnea gracilis in the back. On the left is Yucca recurvifolia ‘Margaritaville’ (soon to be removed), in the front is Agave schidigera, and on the right is Yucca linearifolia. 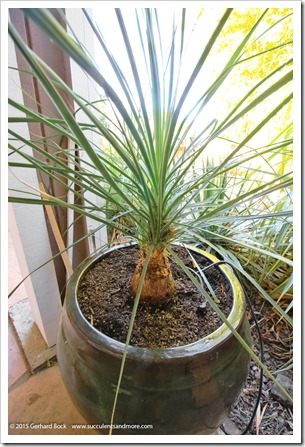 I’m very happy with the results and have a feeling that these two plants will do much better in these spots than the others I’d tried.

What do you think? Yay or nay?