On the way home from the 2015 Succulent Extravaganza I stopped at the Home Depot store in Morgan Hill, south of San Jose. I got excited when I spotted a grouping of large succulents outside the entrance to the garden center. The boxed agaves turned out to be plain old Agave americana—seriously, who would spend money on those? Dasylirion quadrangulatum was tempting for $59.99 in #15 cans but they were no bigger than what I already have. But then there was Aloe ‘Erik the Red’. I already have one, but the flowers are so nice, I wouldn’t have minded another one. Aloe ‘Erik the Red’ was also $59.99 in #15 cans. 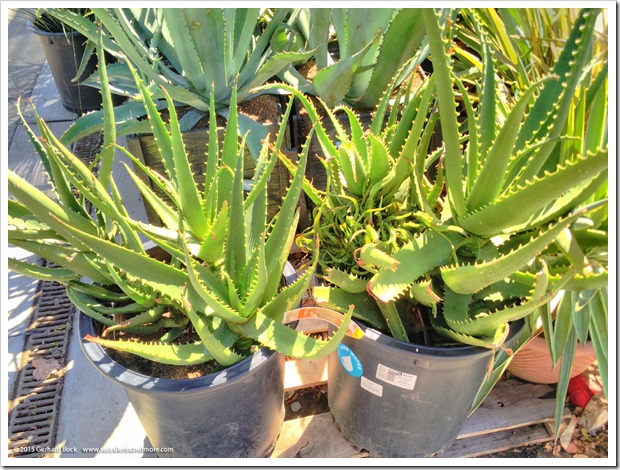 A good price for large plants.

But were they healthy? Not so much.

Even feeble-eyed me spotted the problem right away: 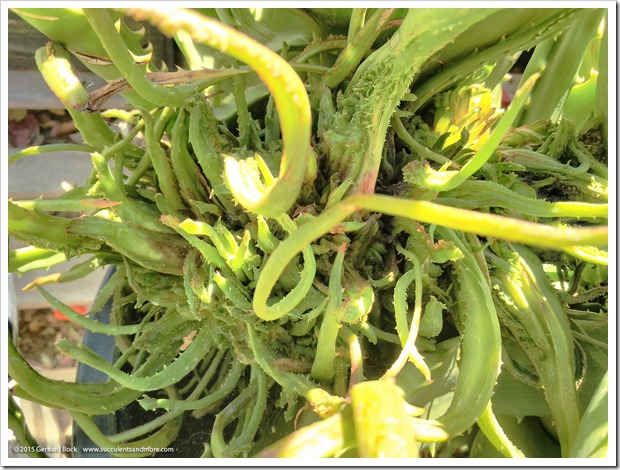 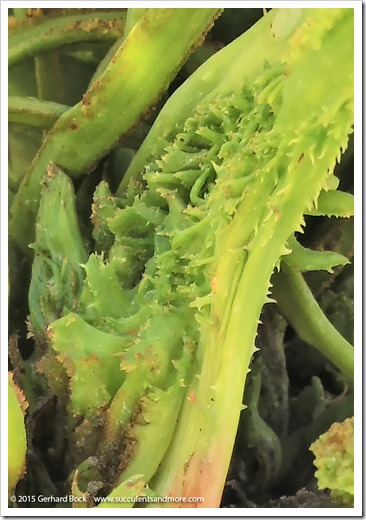 I’m talking about aloe cancer caused by mites, the scourge of aloe growers in the Southland. Aloe mites are microscopically small spider relatives—arachnids instead of insects. As the mites feed on aloes, they secrete a chemical substance that causes abnormal tissue growth, often resulting in a solid mass (called a “gall”) developing around the mites. This gall protects the mites both from predators and from topically applied chemicals. While the mites and the abnormal growth they produce (often referred to as “cancers”) rarely kill the plant, they can cause wide-spread disfigurement. And what gardener wants a plant that has the horrid-looking growth you see in the photo above?

There are no easy treatment options for this disease. Insecticides don’t work since mites are spiders, not insects. Topical miticides (mite killers) aren’t effective either because the mites hide deep within the misshapen tissue. Some growers says systemic pesticides work because they’re taken up by the roots and spread into the plant tissue so the mites die after feeding, but there’s no consensus on this.

If it’s a plant you can live without, tossing it is the safest option. Otherwise you can cut away the affected tissue with a sterilized knife. Sunbird Aloes uses a new treatment that involves cutting away the cancer, letting the wound dry and then painting it with undiluted formaldehyde (widely available online, including on Amazon).

Lucky me, I haven’t encountered aloe mite damage on my aloes yet. But if—or rather when—I do, I’ll give the formaldehyde treatment a try.

The best option, though, is prevention. Buyer beware, and all that. If you see obvious signs of mite damage, don’t buy the plant and tell the nursery why. I stopped an employee at Home Depot and told her what I’d seen but she seemed rather disinterested. I wouldn't be surprised if the same aloes are still sitting there, waiting for unsuspecting customers.

There are many articles about aloe mites on the Internet, but in my opinion, these two cover all the bases: