Succulent container gardening on a small lot in Portland, OR

On our recent Pacific Northwest road trip I had the opportunity to visit the garden of Doug Norseth and Bruce Hegna in Portland, OR. I’d met up with Doug and Bruce at the Ruth Bancroft Garden in Walnut Creek, CA in early June, and they’d stopped at our house on their way back to Portland. Doug had sent me photos of their recent backyard makeover so I knew to expect frosted glass fence panels and raised beds made of weathering steel (COR-TEN). But in reality the changes they made were far more extensive than I’d thought.

Let’s start at the curb. From there the house looks no different than most others in the neighborhood. The front yard is what I would call classic Portland. 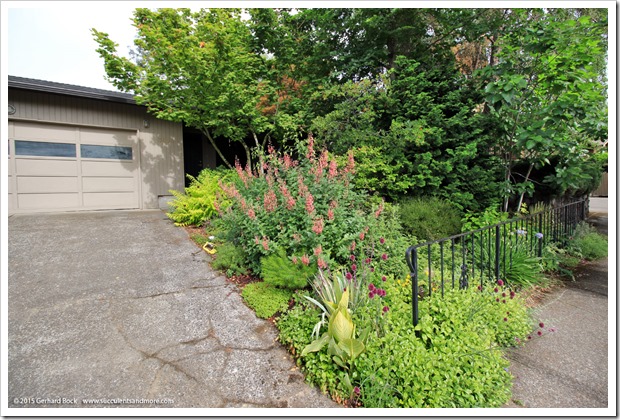 Seen from the phone company parking lot next door, however, the traditional vibe changes to something much more contemporary. 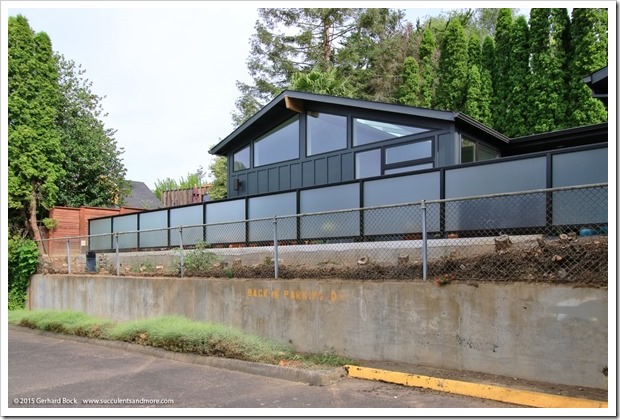 In front of and below where the glass-panel fence is was a row of arborvitae just like the ones you can see at the very left edge of the photo. Doug and Bruce haven’t made a final decision yet as to what will be planted there. Maybe a row of low-growing evergreen shrubs that won’t hide the beautiful glass panels? A recently built addition providing office space and a guest bedroom (seen on the right in the next three photos) cut the size of the backyard by more than a half. What is left isn’t large enough for traditional garden beds, but it does provide room for Doug’s extensive collection of containerized succulents. 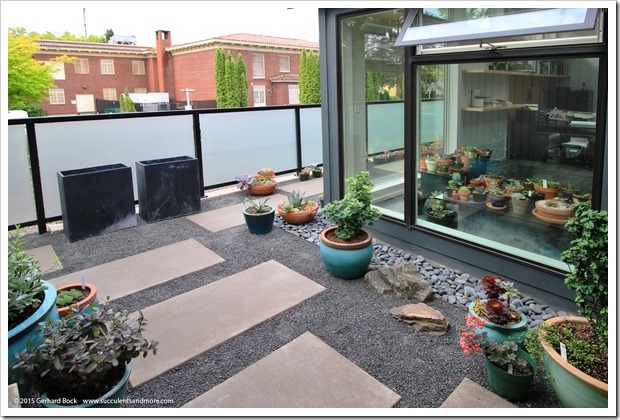 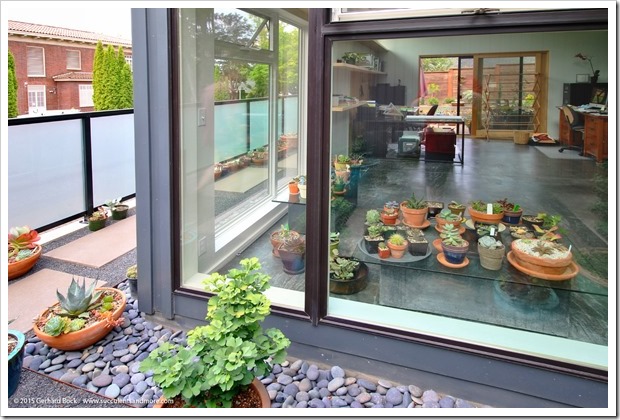 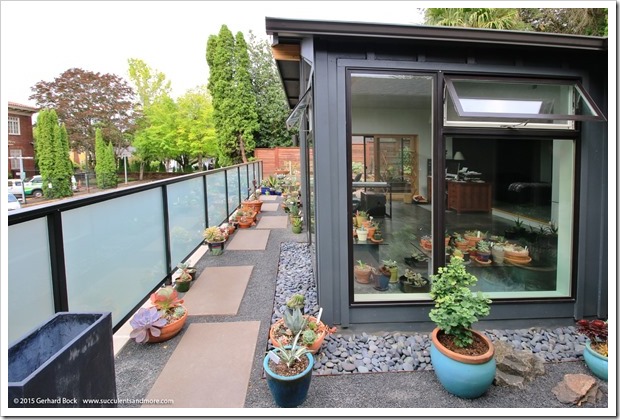 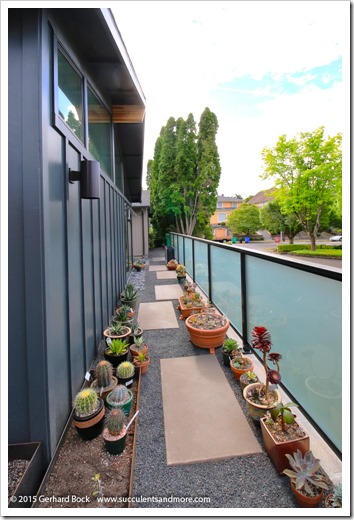 At the far end of the new addition the full width of the backyard has been preserved. Here there is enough room for raised beds. There are two kinds of raised beds: taller beds with concrete borders, and lower beds with COR-TEN steel borders. More potted succulents (MANY more!) unify the two. 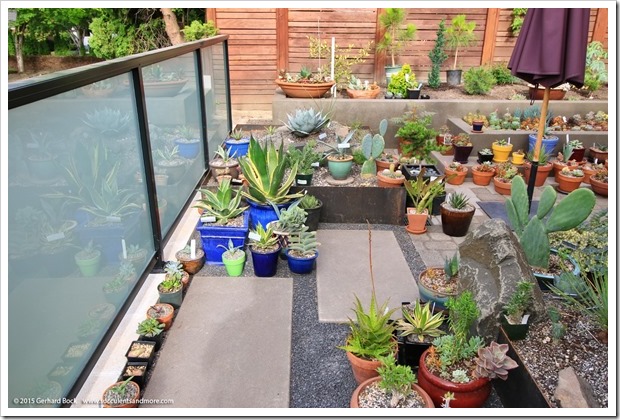 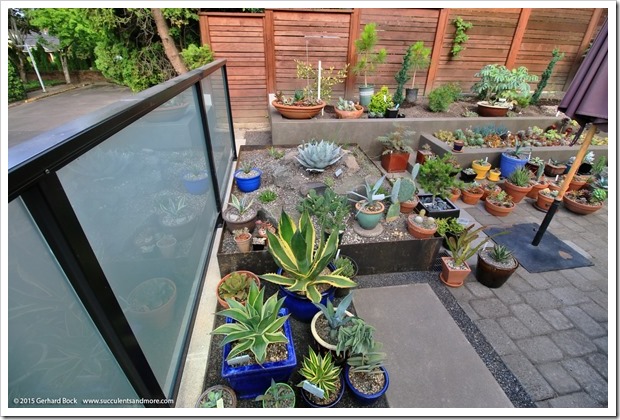 The potted succulents are Doug’s domain, and I think he has more than I counted in Loree Bohl’s Danger Garden! (Doug told me that he recently bought a glazed ceramic pot from Loree at a garden bloggers’ bazaar—in Portland, there are clearly fewer than six degrees of separation.) 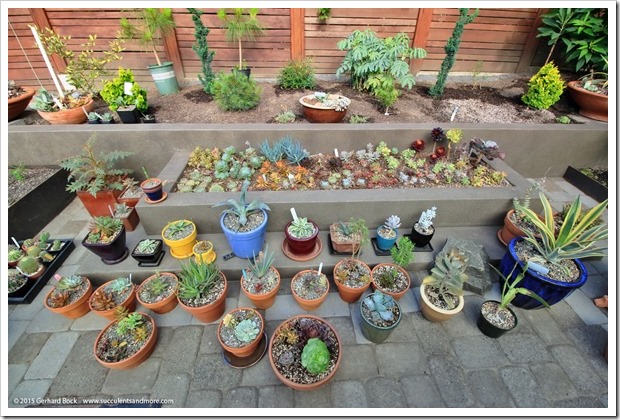 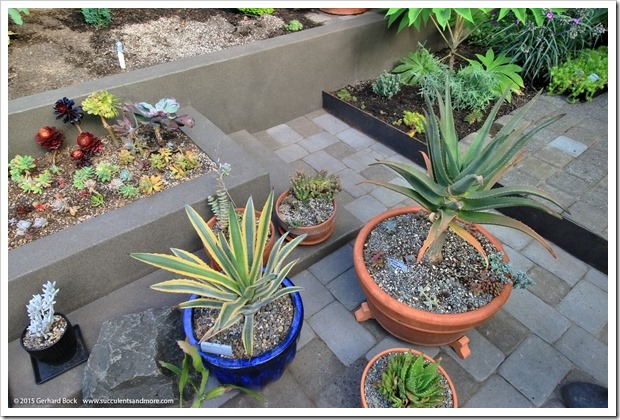 The next two photos show the sliding door at the far end of the office/guest room addition. While you still see lots of potted succulents, as well as some in COR-TEN-enclosed raised beds, you also get a glimpse of a much different kind of garden beyond. 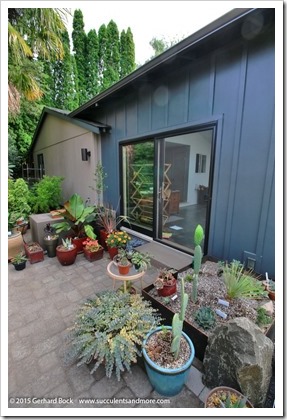 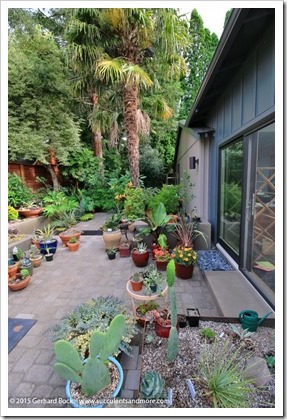 The title of this post emphasizes potted succulents, which are certainly a big part of this property, but there is another garden tucked away here: one dominated by a towering redwood tree and the kind of hardy large-leafed exotics featuring prominently in the Danger Garden as well in the garden of Sean Hogan (owner of Cistus Nursery). It’s clear there is a lot of cross-fertilization going on in Portland’s very active gardening community. 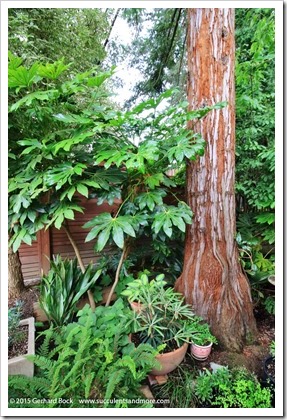 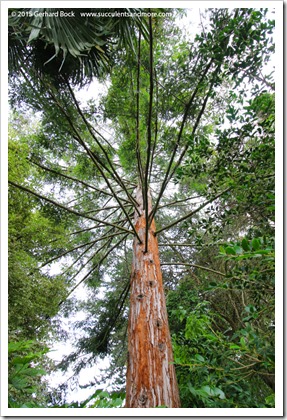 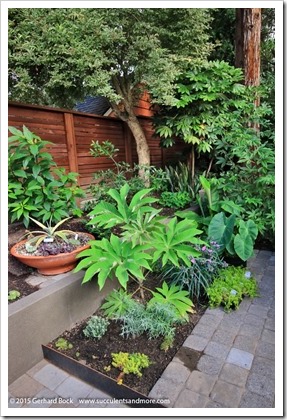 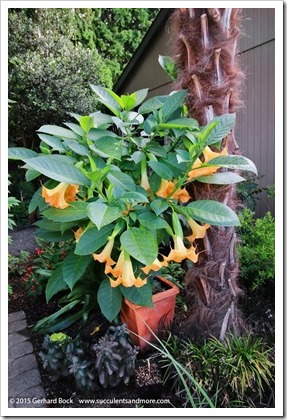 This part of the garden—the lush, exotic corner, you could say—is the domain of Bruce Hegna. Bruce runs his own landscape design business, Nature/Nurture, and it’s obvious where his plant interests lie. (Among many other things, Bruce collects dwarf conifers, some of which you can see in the photo with the purple patio umbrella further up in this post.) 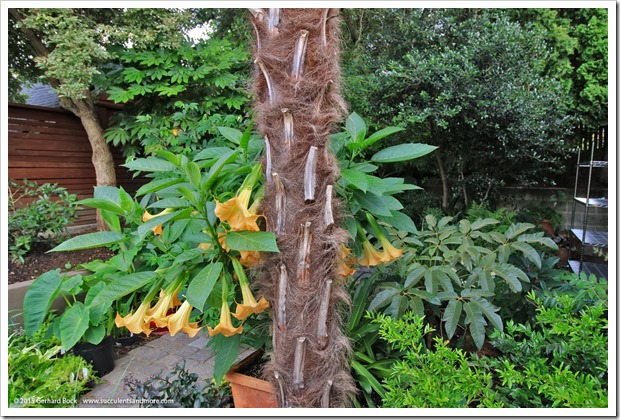 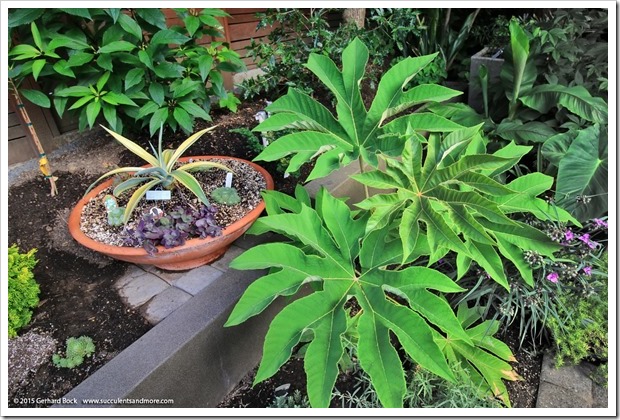 Doug and Bruce’s garden is still very much a work in progress, but I dig the contemporary touches—the frosted-glass panels and the COR-TEN steel—and the juxtaposition or xeric and exotic plants. I can’t wait for my next Portland trip to see how this garden has developed.